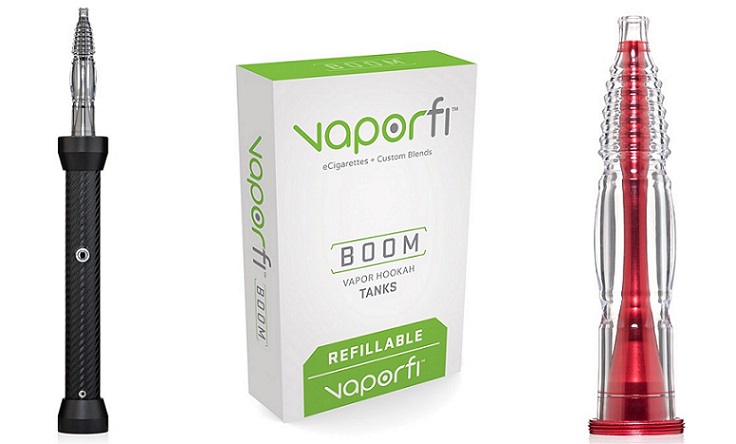 Disclosure: All the vape pens which we review on this website are tested by our trained, paid staff. As part of the review, VapingDaily.com links directly to the product or brands so that you may purchase directly from the provider. We receive commissions from these providers, however, this does not affect the price you pay, and the commissions we earn help us pay for the costs of running this website. Click here to learn more. Thank you.
Overall Performance: 90%
User Experience: 85%
Value for Money: 85%

Our Verdict: Hookahs are usually cumbersome devices, thus not so portable. VaporFi solves that problem with the Boom. A portable hookah, users can bring it to any party and quickly pass it around with friends. With two tanks, one can swap out flavors with ease or combine both at the same time for a truly unique vape. 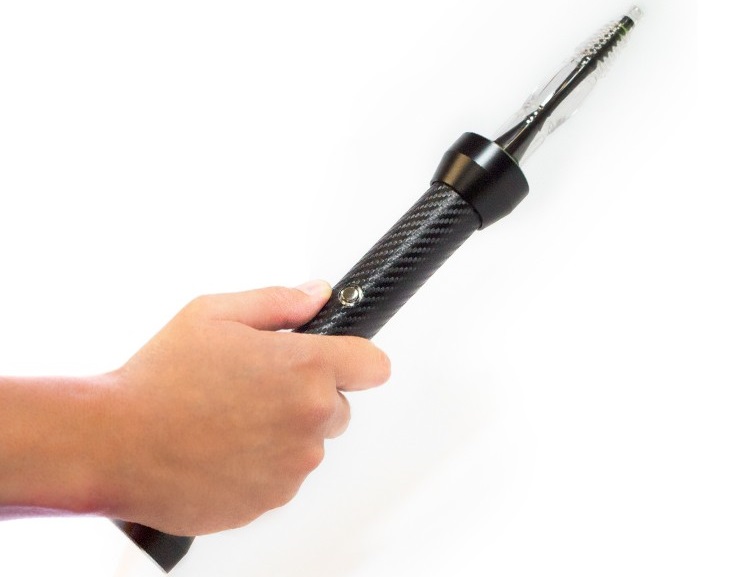 Design: Compared to other hookahs, the VaporFi Boom is significantly smaller and much more portable. It is about the size of a large flashlight with a single button on the side. The finish resembles that of carbon fiber, and the two ends are wider than the body to allow it to stand on its own. The mouthpiece included comes in black, though one can purchase extras in different colors.

Build Quality: The Boom feels solid and compact. It is well-built and continues the VaporFi tradition of quality. Everything is machined well with no ill-fitting parts, and nothing rattles when the device is shaken. Clearomizers and the top cap screw on and off smoothly as well. It is light for its size, but not so light that it feels flimsy. Overall, the Boom looks like it could survive being passed around and can last many years if taken care of properly.

What’s in the Box: Inside the VaporFi Boom Starter Kit, users will get one 2200mAh battery, two reusable clearomizer tanks, one black mouthpiece, one wall charger, and a user manual.

Usability: The Boom is a very simple device to use. To charge the device, users plug the cord into the charging port near the bottom of the unit. The VaporFi logo at the end of the Boom will light up red to indicate that it is charging. The glowing logo is a nice touch, compared to a mere LED light in some devices. While charging, users can set up the Boom for use.

To prepare the device for use, unscrew the top end of the Boom and remove the rubber spacers inside. Fill both tanks with your choice of e-liquid, then screw one or both inside. Once the tanks are set, insert the rubber spacer to ensure the tanks will not rattle around inside. The mouthpiece is then attached by inserting it through the hole of the top cap from inside. This method makes sure that the mouthpiece stays on even when pulled on. Screw the top cap with mouthpiece back on the device and you are ready to vape.

Pressing the button three times will turn the device on. Turning it off requires another three button taps. This feature prevents the Boom from accidentally firing inside a bag or while being transported.

To start vaping, users just press the button when inhaling, then releasing after every puff. The unit also has the option to simulate the bubble sounds from a real hookah. This is turned on by pressing the button five times. To deactivate the sounds, press the button another five times.

If you are used to vape pens and e-cigs, you will notice that the Boom is prepared differently. While not exactly hard, it might take some practice to get a feel for it. However, it is still simple to use, especially after one gets used to its operation.

Vapor Production and Performance: Vapor production from the Boom is impressive. Moreso when the two tanks are used together. The device outputs at 4.2 volts giving more power than traditional vape pens. The added voltage produces more vapor, granting users more flavor at the same time. Taste is pronounced and clean, without any aftertastes.

However, one must make sure the tank does not fire dry, or the atomizer will get ruined by giving a burnt taste. As long as one monitors the e-juice levels often, this is not an issue.

The overall performance of the Boom is excellent, and users who love to use a hookah will find that the reduced size does not mean reduced performance. The hookah experience is intact with the Boom, and that is the whole point of the device.

Battery Life and Atomizers: The Boom comes with a 2200mAh battery that provides excellent longevity. It can last around four to six hours depending on use. While vape pens and e-cigs with similar battery sizes last longer consider that the Boom outputs at a much more powerful 4.2 volts. It also has to power two tanks at the same time, requiring more power. However, if one tank is used, battery life may be extended to about eight hours easily.

As mentioned, the atomizer of the Boom outputs at 4.2 volts, which means more vapor is produced than the typical portable hookah or e-cig. The dual tank system is a great feature that lets users double the capacity of their e-liquid or fill each with a different flavor for easy flavor changes.

Additionally, both tanks with different flavors can be used at the same time to blend both for a unique vape. This lets users try out different flavor combinations without committing to it by mixing a batch then regretting it in the end. The tanks are also easy to fill and replace, giving extra value to the device.

The Boom is a great portable hookah that performs well. Its size may not make it convenient to act as an everyday device, but for parties and gatherings it is perfect. Preparing the device is different from regular e-cigs. However, this is because it functions differently.

VaporFi has cut the price from $129.99 to $89.99 which makes the Boom a superb bang-for-buck device. The Boom’s old price had many users and reviewers complain, but with the price cut, there is no better time to get one than today.

For users who are looking for the full hookah experience but without the bulk, the Boom is perfect. The dual tank system works great and can result in unusual flavor combinations. A great buy at $90 for an excellent device.

October 20, 2017
Read our Vapor Slide 2 in 1 Review and find out about the great features the Vapor Slide has to offer. We loved it. Find out if you will too? 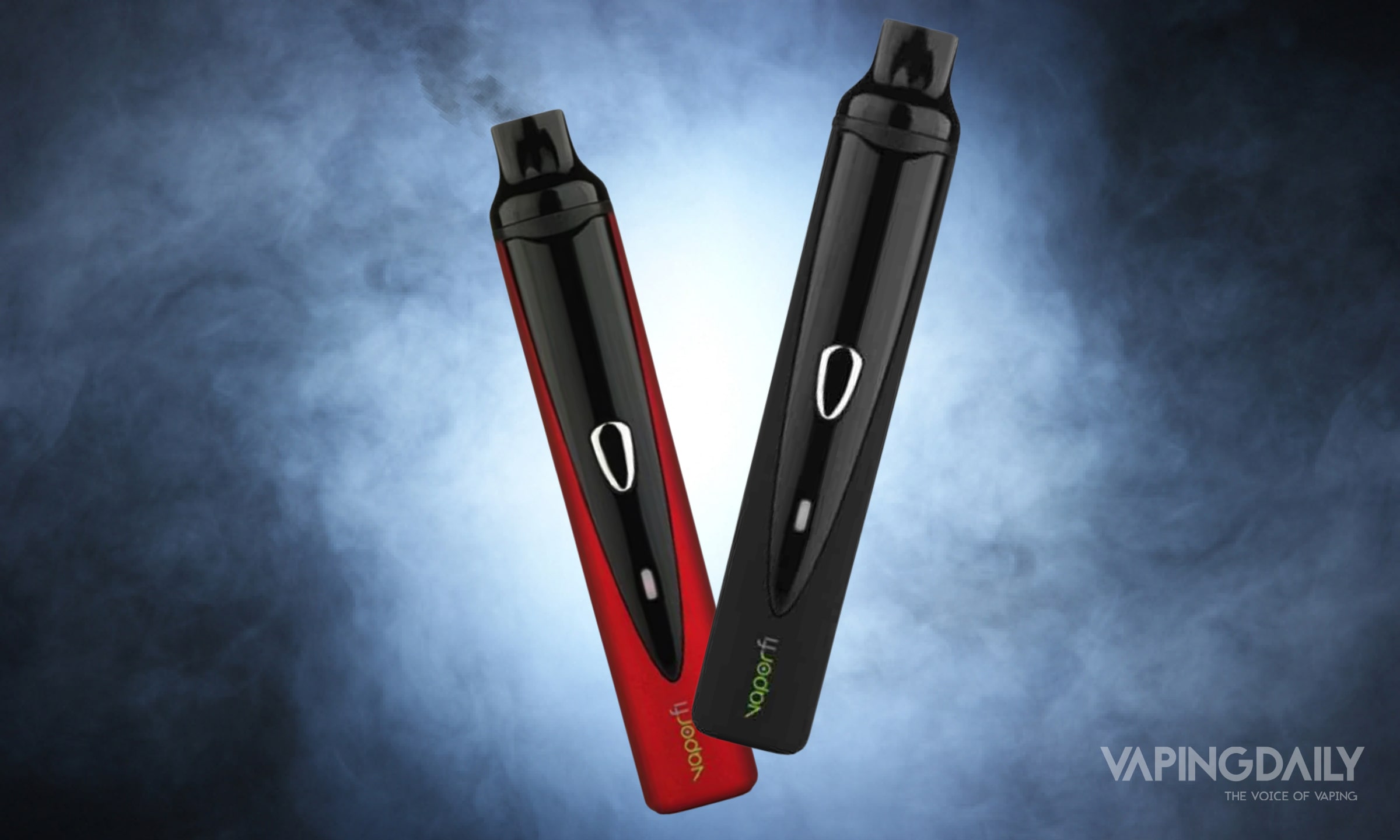 July 31, 2015
We have rated this vaporizer as one of the best in the industry. Check out our VaporFi Orbit vape pen review to get full information on the product.