Wismec is a company I’d heard about before, but I never had the pleasure of reviewing any of their products, so I was excited to see Wismec Reuleaux Rx75. I knew that they were responsible for some of the more technically advanced mods out there like their entire Reuleaux line, which includes the Rx2 and Rx3.

And they are also well-known for designing tanks and other accessories, like the IndeReserve RDTA tank, also developed in collaboration with American designer JayBo. As its title suggests, the power output on this device is an astounding 75W, which is on par with other devices like the Vaporesso Target 75W.

The Rx75 is a more advanced device. It is geared more toward those vapers who have experience modifying their mods and have the knowledge to understand how all the different functions of the mod work. 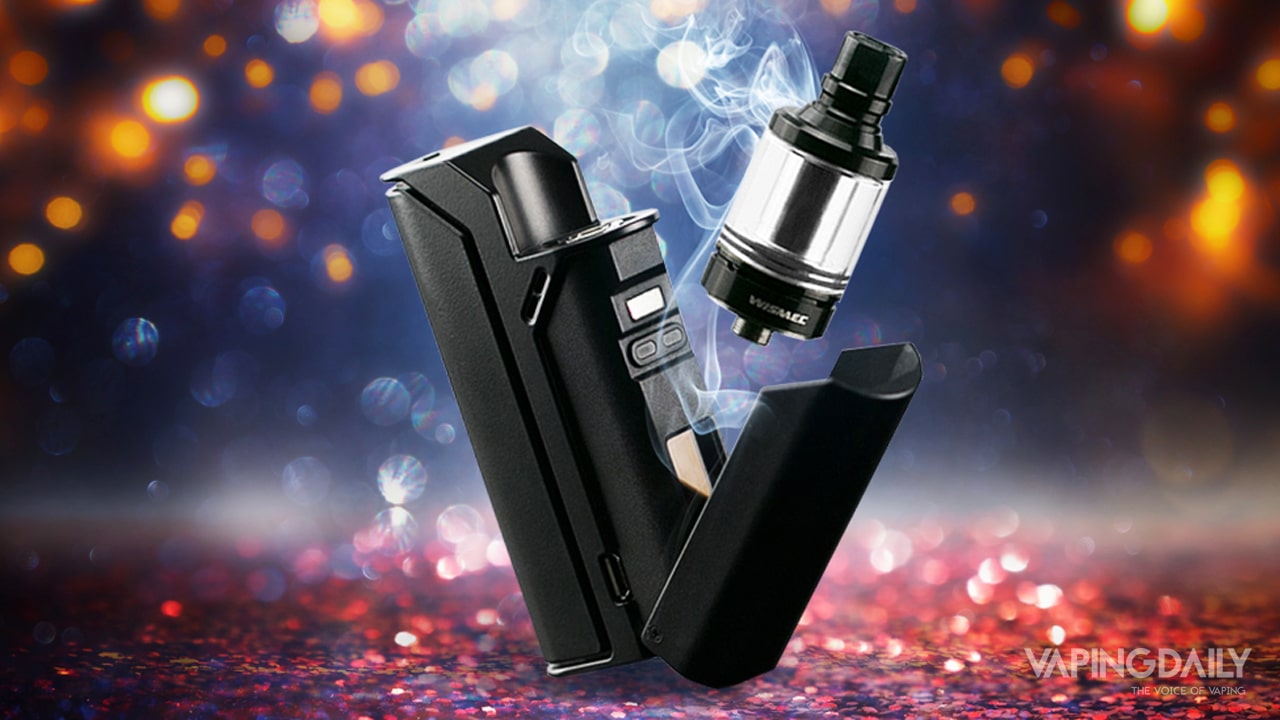 The Wismec Reuleaux Rx75 comes in a smart-looking black box that has the design sketched onto the front. Inside you will find the following:

Looking at the Wismec Reuleaux Rx75 Itself 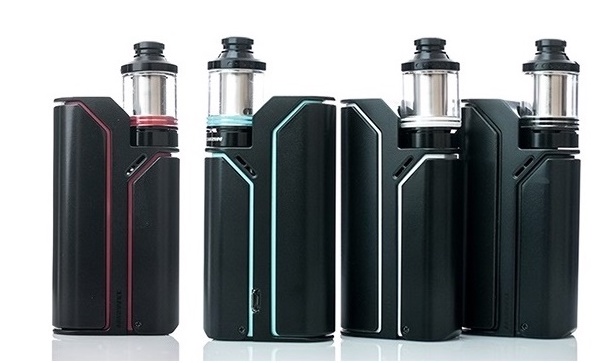 Although you do get a lot of goodies in the kit, the one thing that is noticeably missing is the 18560 battery that you have to buy separately. Or, if you’ve been in the vaping game for a long time, you will probably already have one.

The parts all come neatly laid out in the box and taking out the mod first you can feel its sturdiness and metal finish that reminded me a lot of the Vaporesso Mini that had a similar heft while still being relatively small. The Rx75 isn’t as small as the Vaporesso Mini, but it is still more lightweight than other comparable devices.

The interesting thing (one of the interesting things) about the Rx75 is the OLED screen, which is covered with a transparent door that lets you see the readouts but can also be flipped open to access the menu and selector buttons directly. The door can even be switched out for a non-see-through door that comes included in the kit.

The firing bar, as it is an elongated push bar rather than your standard button, is another interesting feature of the Rx75. It covers the battery slot as well as the firing button inside. And it’s coup of design innovation, in my eyes.

It makes the device that much more comfortable to fire. And to prevent accidental firings, there is a lock on the top of the mod that you can switch on or off to avoid such a thing.

Design-wise, the mod doesn’t flirt that much with unusual colors or poorly placed logos. It comes in a variety of colors and schemes, that can match up perfectly with the accents that the Amor tank brings to the game.

And speaking of the Amor tank, it’s a complicated little attachment in and of itself, with nearly seven components that make up the entirety of the tank build. It is made out of stainless steel; it is top-fill and has a capacity of only 2ml. That kind of tank capacity is a bit of a disappointment considering the amount of power and control this device allows you to wield.

The Rx75 isn’t exactly a starter kit and if you have never had experience with a sub-ohm capable, TCR compatible device, using the Rx75 can be a bit daunting. But, after using the Wismec Reuleaux Rx75 for a few days (and reading the instruction manual!), it can still be easily navigated.

So let’s first cover all of the adjustable settings on the mod, before dealing with the basic use of the device. The Rx75 is wide-ranging in the various modes in which it can operate. You have your basic wattage control that runs from 1 to 75W, but thanks to the bypass feature of the mod, you can overlook those limitations depending on the type of coil you use with your tank.

If you use only the 0.2ohm Kanger coil that comes pre-installed in the Armor tank, all you need to do to bypass the wattage range is to click the firing button three times and then use the selector button to get to “bypass.” When you have that mode selected, you can use the Rx75 as if it were a mechanical mod with you power output going farther than the 75W limit.

But, I’m getting ahead of myself. Looking at the OLED screen, it has four primary readouts that you can adjust and a puff counter purely for curiosity’s sake, but it’s also useful to see just how much vaping you can get out of the device at specific settings. And, the screen also displays your battery level.

There’s also the option to change the resistance settings on the different coils the mod is compatible with, like nickel, titanium, and stainless steel. And then there is the TCR mode that you can activate by pushing the firing bar and the right selector button at the same time. 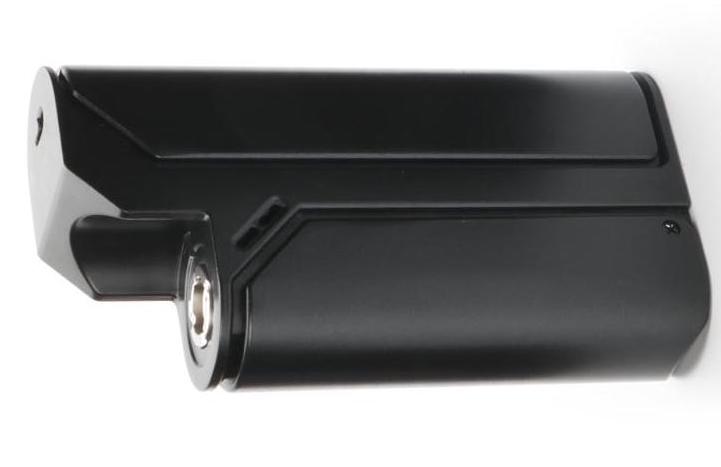 Wismec Reuleaux Rx75 and the Liquids

The tank on the Rx75 is loaded onto the lowered section of the mod. You can put anything that has a 22mm range onto the mod, but anything bigger will be a problem since you’ll get some overhang as well as cover up some of the airflow holes.

There are a lot of parts to the Amor tank in itself, and it functions like most other tanks with its removable top cap and mouthpiece and top-fill features. But it does have a smaller than expected capacity, and I found that filling it wasn’t exactly a cake-walk. The top cap and mouthpiece came off easily enough, and there are airflow valves that run along the bottom of the tank.

You don’t have to remove the 510 drip tip (which can either be a clear or opaque version), to unscrew the top cap, it can be done with all the pieces still in place. Taking off the entire top apparatus allows you to access the filling port.

I’ve had problems before with bottom adjustable airflow vents in the past since they also inadvertently made leaking much easier and convenient whenever I set a device down on its side. I tried that with the Rx75 and was relieved to see it wasn’t leaking when I set it on its side, so I was pleased with that.

Vaping Between The Modes Of the Rx75

As expected, the Rx75 performed like the cloud factory that it was intended to be. Sometimes I marvel at the ingenuity and innovation that goes into producing something as simple as humongous vapor clouds.

The care and skill that went into designing the Rx75 were expressly for that purpose. I started off at rather a mid-range temperature of 400F at a lower-than-expected wattage level at only 30W.

While some of the more intrepid vapers out there might be able to go even further than the 75W limit; I find that going beyond 40W is pushing it for me. Going past 40W can sometimes mean that your flavor quality diminishes, which I noticed is what happened with the Rx75, when I started to push the wattage, even beyond 50W.

And with that much power running through the device, there was a lot of heat register. It didn’t get too hot to handle, but it was a little uncomfortable, and I couldn’t even fathom what it would be like to go into bypass mode.

The mod I thought of when trying to compare the Rx75 was the Eleaf iStick Pro that more than meets the Rx75 on every level, from size and portability, along with the adjustable settings. Except for one key difference between the two kits and that is the types of tanks that the two mods come with.

The Amor tank has its positive points except it doesn’t deliver much in the flavor department. And it goes to show that between two very similar devices the one thing that places one over the other (and I’m considering the kit as a whole, not just the individual parts) is the tank.

The Melo 3 tank on the iStick has much better airflow and does not have that low of resistance on the coils, so you still get great clouds but without sacrificing flavor profile. So, judging by the two kits, and not on the merits of the individual devices, I was happier with the better quality flavor from the Melo 3 tank. 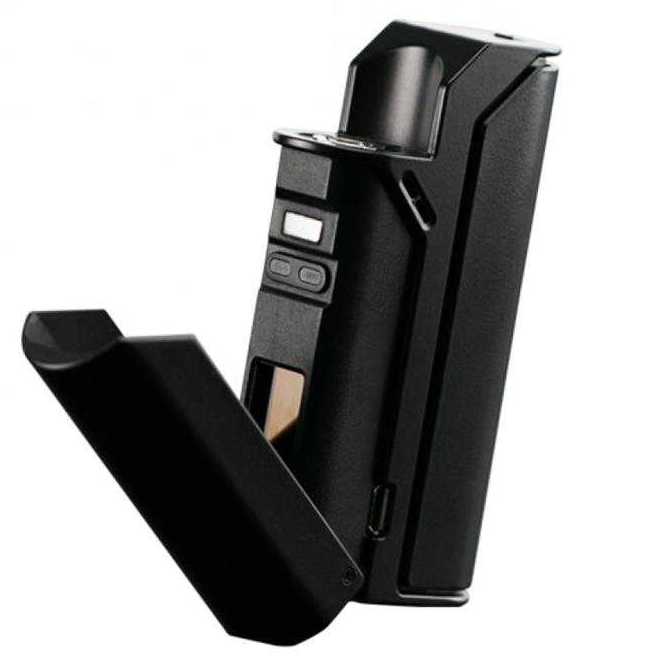 In this category, I include almost everything about the mod. Its physical appearance isn’t exactly eye-popping, but it does have a stoic, and minimalist appearance that I liked. The side firing bar was great as well as the OLED screen that could either be covered or seen by switching out the door.

I know I included this in the pro section, but I also was not completely enamored by this feature. I like having easier access to my adjustable settings. But then again, the Rx75 is a device that you can fine-tune to the point where you don’t even need to adjust anything after you’ve found your sweet spot.

The Rx75 was yet another portable mod that out-muscled most of the competition. But, the power behind the mod did lead, I thought, to a trade-off regarding the flavor it produced.

This pro most certainly applies to the amazing amount of tweaks you can perform to your vaping sessions, but also the little things, like the two screen doors, the interchangeable mouthpieces and the compatibility with other tanks.

The Outcome of the Wismec Reuleaux Rx75 Review

For the first Wismec device I’ve ever reviewed, the Rx75 did put me through the paces regarding learning a lot about what Wismec and what kind of products they produce. I can tell from this well-built, finely machined device that Wismec is on par with Vaporesso in building innovative and technically-advanced devices that perform marvelously.

The Rx75 is certainly portable. It does take some in-depth use and reading of the manual to understand all the finer points of the machine, but once you have gone through that phase, you can appreciate the engineering behind this mod.