Wismec Indereserve RTA JayBo is an exceptional and innovative atomizer with some newly introduced features like Clapton coil and stainless-steel material. It has an open wicking system meant for installation of the coil with cotton. It has a side e-liquid filling design and top airflow control. All these new changes have made this atomizer better than all available in the market these days.

The IndeReserve – Not Your Usual RDTA 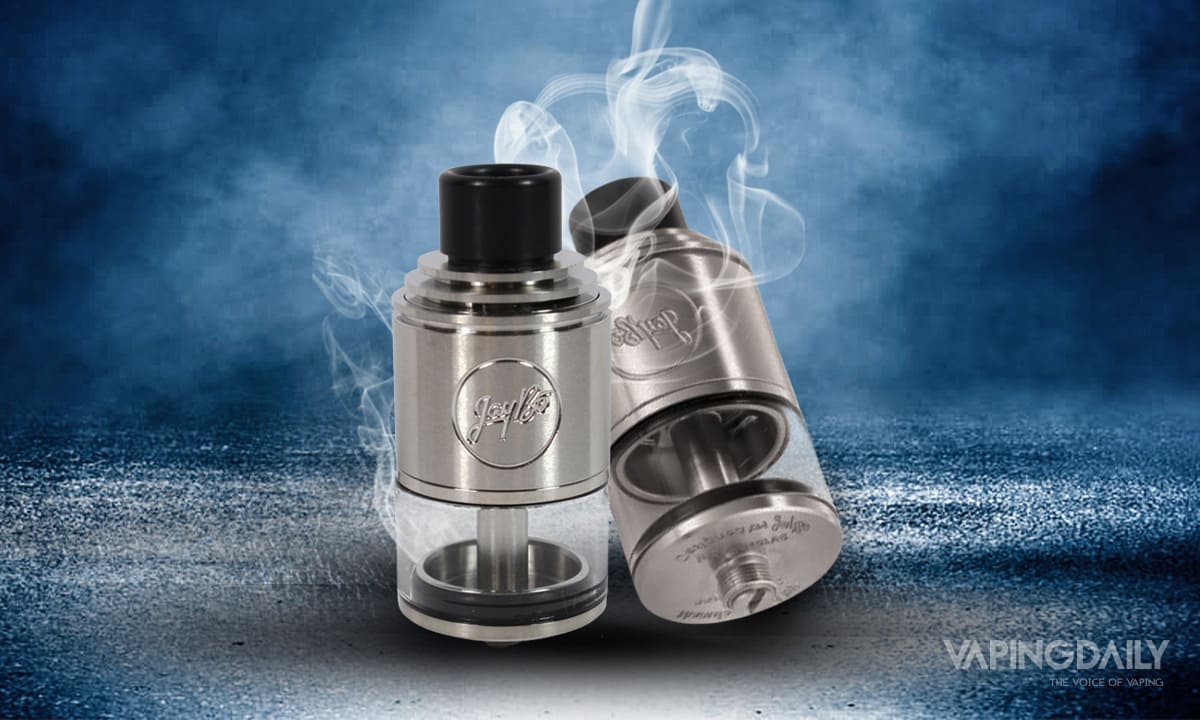 Vaping companies have been partnering with vape reviewers from YouTube for quite some time now. For example, Rip Trippers worked with Digiflavor to create the Pharaoh Dripper Tank. Then, Mike Vapes teamed up with Vandy Vape to make the Icon RDA. The IndeReserve RDTA is yet another collaboration between a YouTube reviewer, Matt from Suck My Mod, and Wismec.

Actually, this is not the first time that Matt worked with Wismec to design an atomizer. Last year, Matt and Jay Bo, the lead designer of Wismec, teamed up to create the Theorem dripper tank RTA. We can say that it was quite a unique atomizer. In fact, it performed really well. However, not that many people liked the way the tank looked and how average its performance was. The material they used was almost entirely glass.

The two collaborated once again this year to create a new tank. Originally, they wanted to make a new version of the Theorem that will address the common complaints that people had with that tank. Then, they decided to go an entirely different route and they came up with the IndeReserve RDTA. The IndeReserve still follows the design concepts of Jay Bo, which is weirdly wonderful. It also added features that blew the competition away.

Just like all of the other stuff that Jay Bo came up with, the IndeReserve is a unique design. There are also a couple of features that you won’t find in other RDTAs. However, being unique does not automatically mean that it would be great. Continue reading to find out more about the IndeReserve by Wismec and Jay Bo. 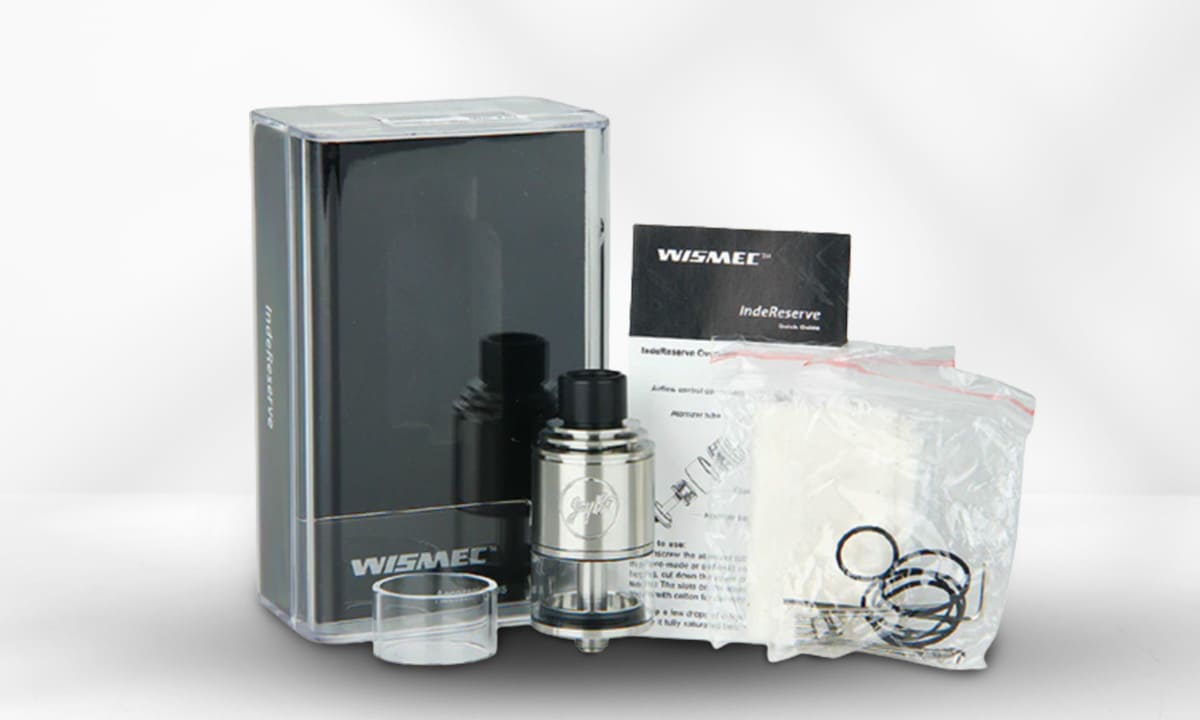 The Look and Feel of the IndeReserve RDTA

The first atomizer that SMM and Jay Bo collaborated on, the Theorem, was a weird looking tank atomizer. In this case, you will be getting the same kind of vibe from the IndeReserve. At the base, the IndeReserve RDTA measures 25mm in diameter. And from the base to the top of the included drip tip it is 56mm tall. The feature that makes the IndeReserve RDTA different from the others is that this has a top airflow design. Whereas, the others either have a bottom or side airflow openings.

Wismec has a crack team of specialists. They make sure that every product that they have are up to their high standards. With that said, I could not find anything to complain about, quality-wise, on the IndeReserve RDTA. The machining on the stainless steel components are top notch, and the threads are nice and smooth.

The airflow on the IndeReserve is so smooth. In fact, when you have it fully open, it actually feels like you are sucking on a big straw. This means there’s no resistance whatsoever, which is great for cloud chasing. However, if you wanted a tighter pull, you can adjust the top airflow to close about halfway. Then, you will get a nice restricted lung hit.

The Unusual, Yet Familiar Build Deck of the IndeReserve

I first took off the top cap and the barrel section of the IndeReserve RDTA and had a look. It surprised me to see the build posts. The T-post build deck as Wismec calls it, is a three-post system. There’s a big T-shaped positive terminal. Then, there are two negative posts on the sides milled directly on the build deck.

If you look at it closely, it is just actually a fancy Velocity-style build deck. Conversely, this time there’s no large space between the two posts. However, they actually did this intentionally so that the build post will take up more space in the chamber. As a result, this will reducing it further.

It is true that the build post is large. However, there is still more than enough space on the build deck for large diameter coils using thicker gauge wires. In fact, the Clapton coils that came with the IndeReserve fits just fine in the build deck. Also, there’s actually a lot of room to spare.

My Vaping Experience with the IndeReserve RDTA

I discovered that I just had to install the coils the way I would on a normal Velocity-style deck. This is after my initial shock at seeing the unusual build deck. Building on the IndeReserve RDTA is quite easy if you already know how to build on traditional build decks. In addition, even if you are a beginner, the learning curve is not that steep. Wicking the coils is also much easier in the IndeReserve compared to other RDTAs. It is because the barrel section comes off and exposes the large wick ports. I just needed to slide the ends of my wicks into the channels and then screw the barrel back.

The first RDTA I owned was the Avocado 25. Although it was a good RDTA, disassembling it was quite a pain. For that reason, I had to remove the 510 pin before I can unscrew the deck section and pop the glass tank out. With the IndeReserve RDTA it’s just like taking apart a regular RTA, all the parts just screw onto each other.

Final Thoughts on the IndeReserve RDTA by Wismec and JayBo

The Theorem, in my opinion, was just an “okay” atomizer. It had neat features, but it performed just slightly above average. With the IndeReserve RDTA, I think SMM and Wismec have finally redeemed themselves. I honestly enjoy the vape I get from this RDTA over the original iJoy Limitless RDTA. Even though, I still think the Limitless is one of the best. Do I recommend the IndeReserve RDTA? Yes, regardless if you are a beginner or a seasoned vaper. I guarantee that you will love the IndeReserve RDTA.

To get your hands on the IndeReserve RDTA, follow the links we provided for the best deals on the price of the tank.