The Vaporesso Aurora is a new updated pod vape system that has CCEL coils in a 2ml pod and a 650mAh battery with three power settings. The device provides sufficient MTL auto-draw; its 1.3-ohm pod perfectly maintains nicotine salts, making the device even more popular among vapers. 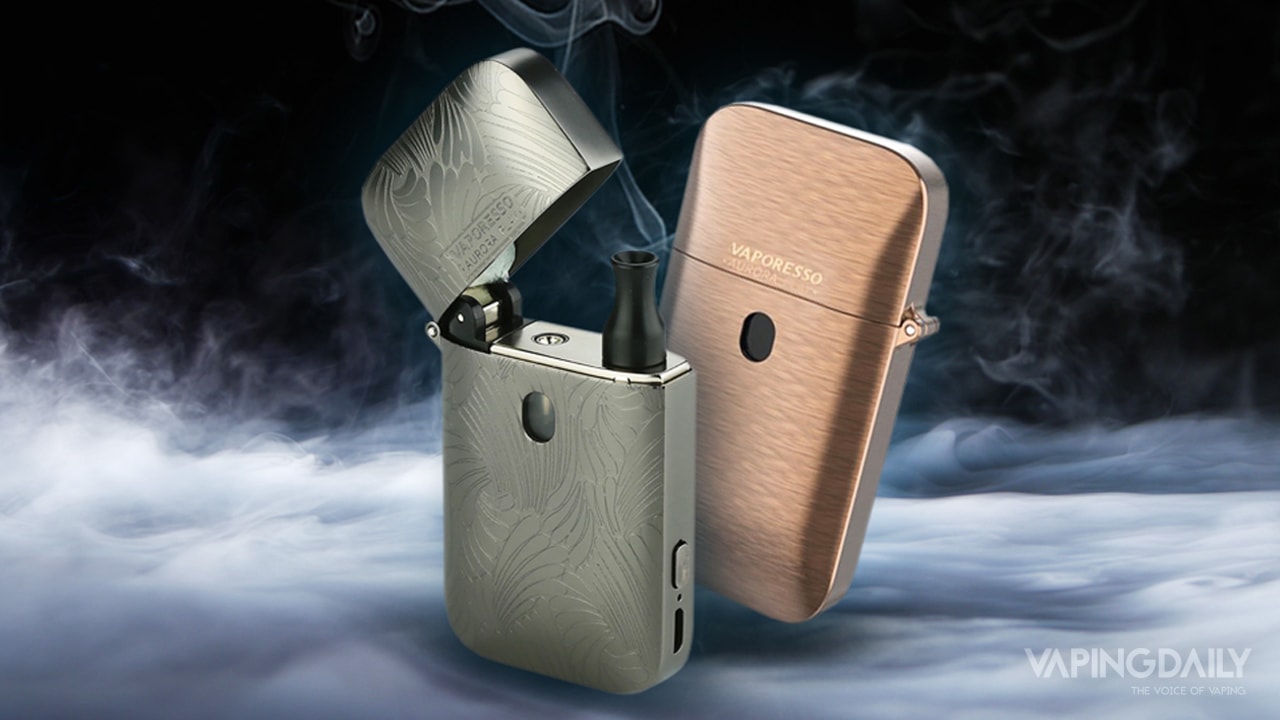 The new Aurora Play keeps the same look as the original — a Zippo lighter with a flip-back top. The latest version though has a clean, classic look with curved edges, as opposed to the original that was larger and had straight edges, and some (awful) logos on its front.

The new Vaporesso Aurora also has a smaller capacity battery at 650mAh. The first Aurora had an 800mAh battery. The other significant difference or improvement is the three power settings for the device. The Play is draw-activated, but there is a small power button that also changes the power output.

Vape devices trying to look like a real-world object is not uncommon. The Aurora Play follows in that tradition, inherited from the older Vaporesso Aurora, which also took on the form of a Zippo metal lighter. Rather than being a novelty, the design choice was the right one, as Vaporesso has managed to make the Aurora Play look as good (and as badass) as a real Zippo.

There are four color options for the pod vape, three of which (metallic grey, silver, and bronze) look fantastic and only add to the device’s overall aesthetic (please don’t get the rainbow one, please). 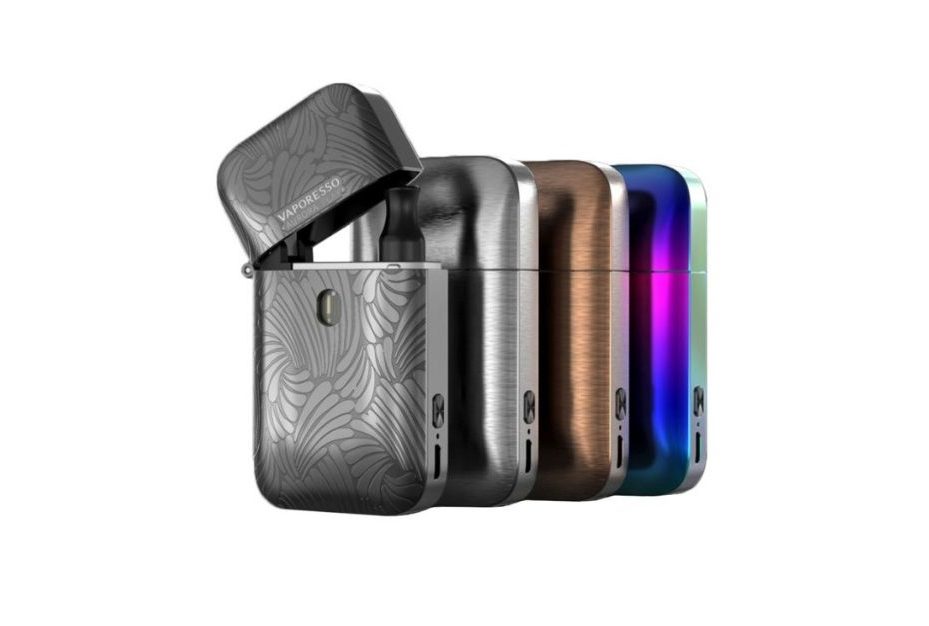 The device has a single operation button on its side, which is right above a USB charging port to recharge the 650mAh battery, and a pin-hole LED that shows battery life. Turn the device on and then vape, so the Play is still draw-activated. The button also serves to change the wattage output, of which there are three settings indicated by different lights: red — 9W, blue — 10.5W, green — 12.5W.

Two small viewing windows dot each side of the device so vapers can check their juice levels. The flip back top clicks into place when it is closed, but wiggles around when it is opened, and are taking a vape. It can get a little annoying and cumbersome when vaping it, but it is not such a huge deal.

The exterior is a zinc alloy, which again, was the right choice as it not only adds to the unit’s look but also gives it some durability when it is out in the real world. The rest of the outside of the Play is clean and smooth, and it feels good to hold.

Flipping back the top reveals the Delrin mouthpiece that sticks straight up out of the pod. The first Aurora had a bent mouthpiece that had to be swiveled out to vape. It was longer too, so the vape came out a little cold, and flavorless. 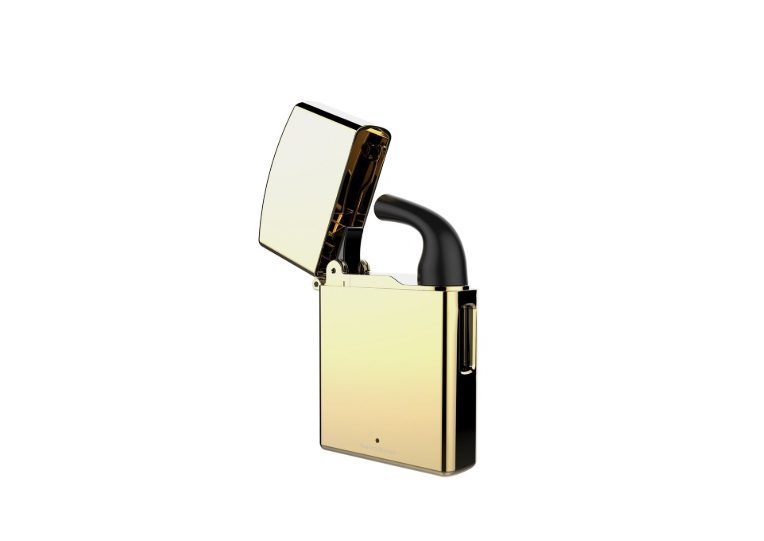 The Delrin part of the drip tip comes off though and acts as a guard as well. The only other part of the Aurora that is left to discuss is the pod itself, which is maybe the central feature of the device.

The pod for the Aurora Play differs a lot from the original. The first Aurora used something similar to a tank than a pod; it also held less e-juice, 1.5ml. The tank was a drop-in style and connected to the mouthpiece. It also had bottom-fill ports and used a coil that screwed into its base.

The Play has the same CCELL coil, which is ceramic and is rated at 1.3ohms, but the coil is now encased inside the food-grade plastic pod. The pod has two contacts on its base, and a proprietary PTF (push-to-fill) system unique to this pod. Use a specific style of bottle top to be able to fill the 2ml pod.

The Play also came with a 10ml e-juice bottle for use with the fill port, although some versions have not. No word on whether Vaporesso is continuing to include the bottle or not, or whether there is a second, sub-ohm coil out for the Play, as some other reviews have mentioned. 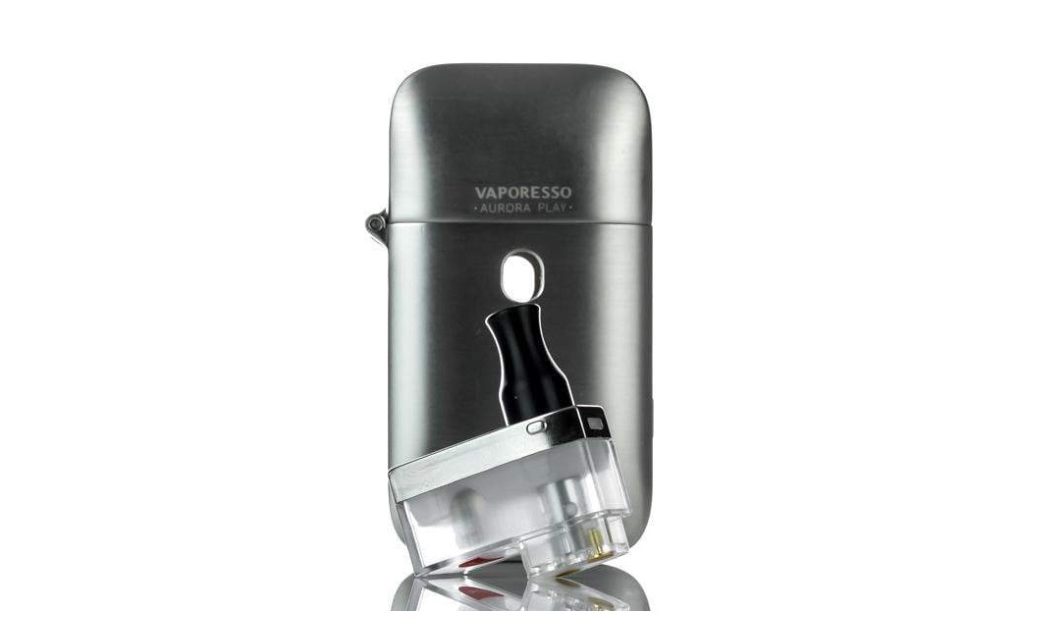 Update: it seems that Vaporesso sent reviewers a pre-production model since the retail version comes with a second pod with a 0.65ohm coil and no 10ml e-juice bottle.

Nevertheless, the bottle works well, and unless overfill the tank, there is little chance of the pod leaking. There is a magnet in the cartridge that makes a connection with the battery and keeps the pod in place.

Remove the pod from the battery by pulling on drip tip, which can sometimes lead to the Delrin part slipping off instead. It happens, but not frequently, and if it does, just hold on to the mouthpiece to remove the pod. 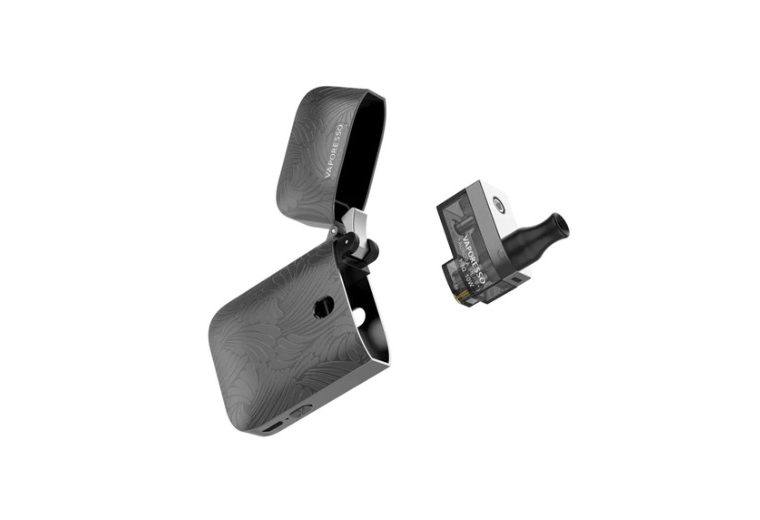 Also, remove a small peel-away sticker on the base of the pod to allow for airflow. There are a few airflow holes on the bottom of the coil, but there is no adjustable airflow option on the Play.

Taking a Vape on the Vaporesso Aurora

There is more to the Play than just being another draw-activated, button-less pod system. The variable wattage feature let vape customization up to a point, which is still a lot for a small, easy-to-use device.

The pod fills quickly, and there is not much else to work other than installing the device. With the different power settings, the coil does not need so much priming or time for the e-juice to seep in to get a flavorful vape, so start vaping as soon as the pod is full.

The draw-activated battery does a good job and fires very fast when vaping. As the Play is a classic mouth-to-lung device, nicotine salts e-juices work best, but going for a high VG e-juice does not diminish either the coil life or flavor. 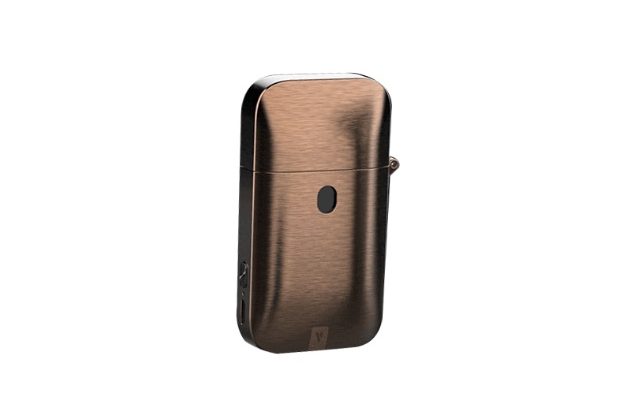 The vapor gives a good throat hit, but it is still voluminous and more substantial than expected for an above-ohm coil. Switching between the wattage levels does impact the vapor, as the highest setting gives off a more intense flavor as well as giving off more massive clouds.

Some sites also say the coil is compatible with CBD oil, but it is not clear if this is true or not, as Vaporesso has no info on their site about whether the Aurora vapes oils.

What is clear is that the Play does feature a proprietary Vaporesso Omni board, which was designed especially for this device, and also enables the device’s pass-through charging feature, as well as the three preset power settings.

The Orion Q is a pared-down version of the Lost Vape Orion DNA pod mod. It has the same form factor, and user configuration, only it comes without the DNA chip inside. 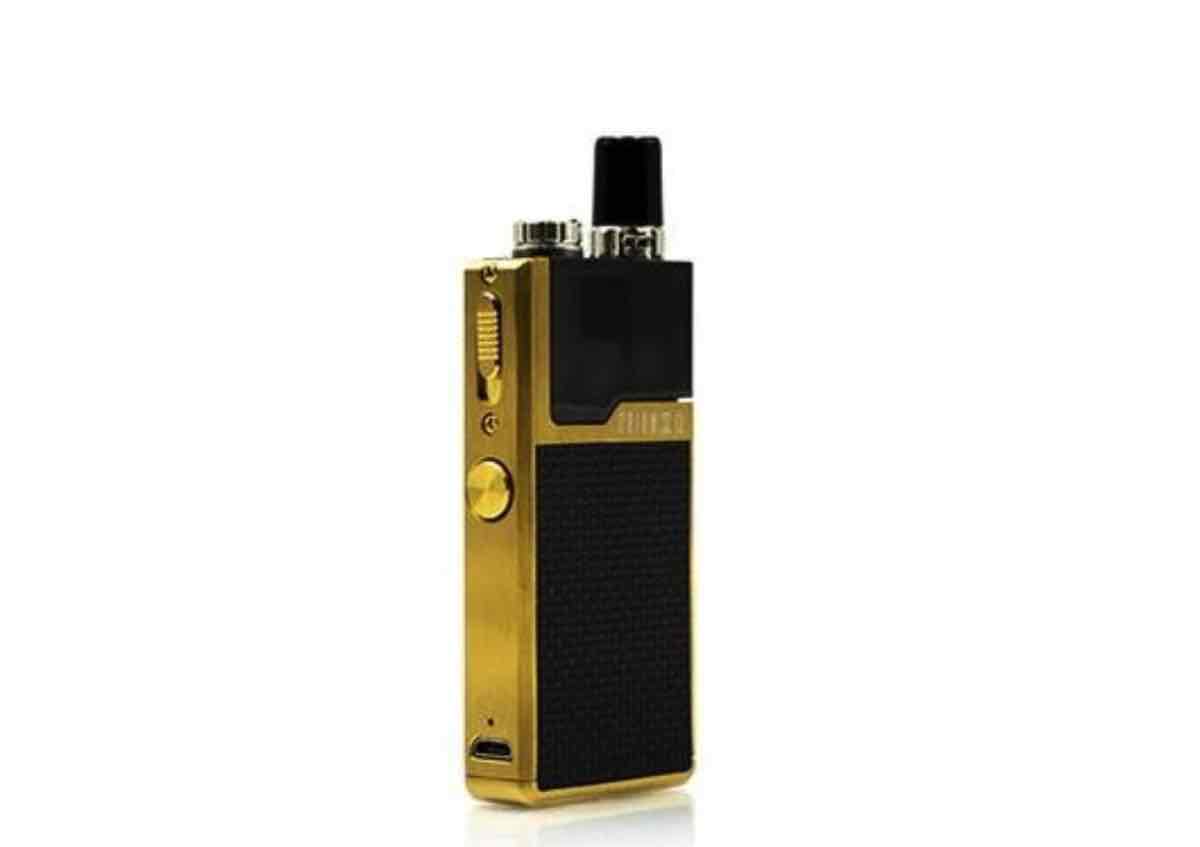 Otherwise, the Orion Q uses refillable pods that secure into place with a latching system. The pods can hold 2ml of e-liquid and use a coil rated at 1.0ohm. The device uses a battery with a 950mAh capacity and can output a maximum 17W of power.

The Renovo Zero is a refillable pod device for use with e-liquids, both regular freebase and nicotine salts. The Zero also has a 650mAh battery and three preset power outputs, 9W, 10.5W, 12.5W. 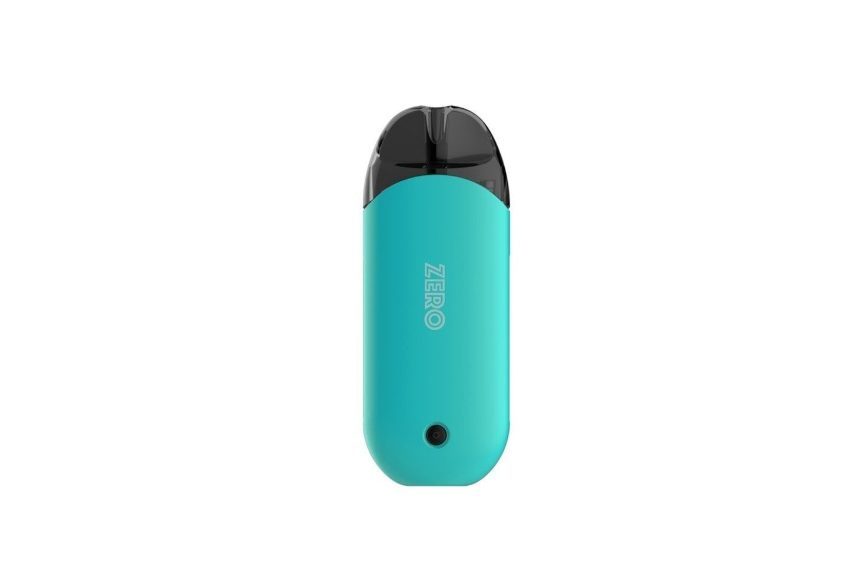 The device uses 1.5ml capacity pods that have a ceramic cell coil rated at 1.0ohms. The exterior of the Zero features a single power/firing/adjustment button and has an indicator LED to show battery life.

The Aurora Plus is more than just Vaporesso’s attempt at trying to make a cool-looking device, although they did succeed at that. The Aurora Plus looks very simple, but there is a lot of innovation behind its simple exterior. The pods use new, convenient filling method, while the ceramic cell coils work just as well with thick, VG e-juices, as much as nicotine salts e-liquid.

There are not a lot of pod mod devices that have three preset power settings either unless counting something like the Lost Vape Orion DNA. Before the Orion DNA came along, it was unheard of for a pod device to have variable voltage settings, safety protections or things like pass-through charging. The Aurora Plus, with its mini Omni chipset on board, offers all that and more.

Are you a fan of vapes looking like other objects? Did you vape the original Vaporesso Aurora? Do you think the Aurora Play is better? Send us your thoughts on the two pod mods by leaving a few lines in the section below.