The Myle Vapor Starter Kit is an Italian made and designed pod vape that uses pre-filled e-juice pods to deliver a powerful and flavorful hit. Its ergonomic build makes it a comfortable and discrete pen that is highly portable and inconspicuous.

With its built-in battery and magnetic charging base, draw activated firing system, and .9 ml holding capacity, it is a simple and easy to use device that is certain to satisfy a vaper.

Myle Vapor Review - How Good is It?

The first thing that should be discussed is the Myle Vapor’s appearance. It is an extremely good looking device that not only has an ergonomic design, but is also available in many colors – gunmetal, rose gold, white, midnight black, and pink. Additionally, it has several built in features that make it a great vape starter kit.

The best of them are the built in batteries and magnetic charger, which together make it more convenient to use than other vaping products. Four LED lights on the chassis will tell you when it is ready to use and indicate the battery life. 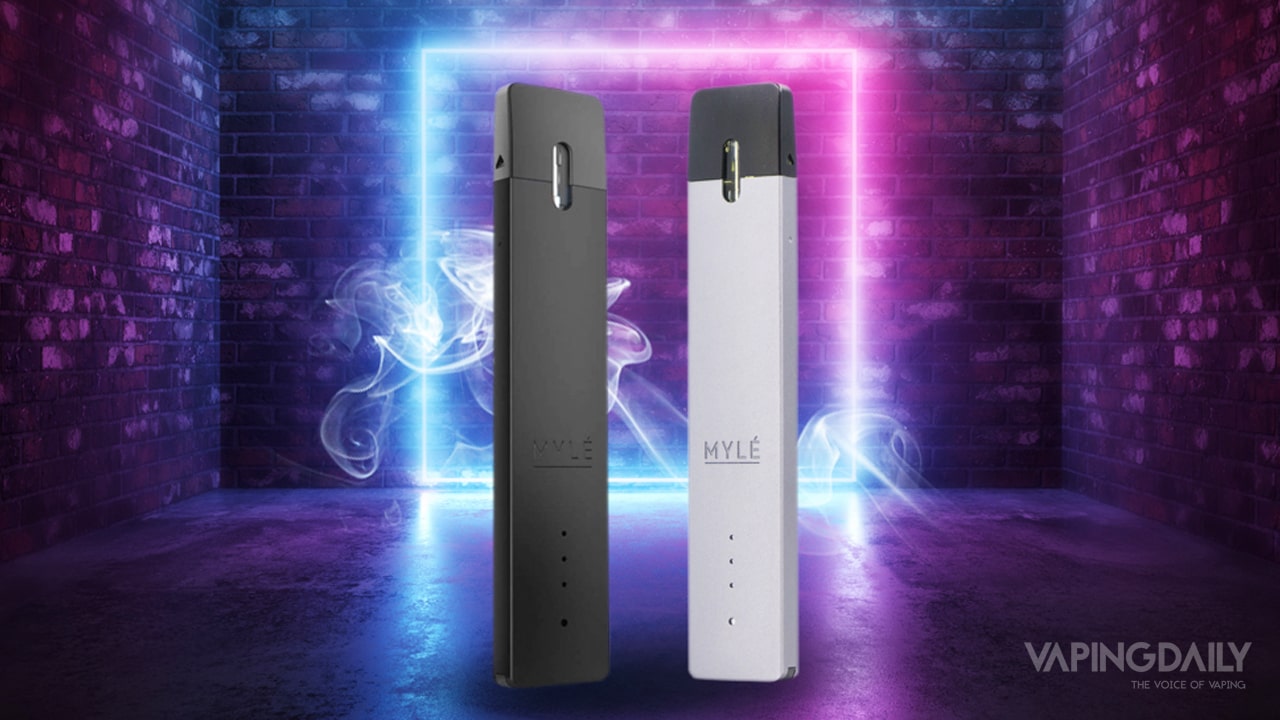 Another great thing about it is that it fires immediately after you inhale thanks to its air activated sensor. The last thing worth mentioning here is that the pen and the pods are constructed very well, which is why there have been few if any reports of e-juices leaking out.

The only drawback is that there are only five flavors available (tropical mango, strawberry, mint, tobacco, watermelon), but that is not a huge deal thanks to their good flavor and salt nic levels, and all the benefits and enjoyment you can get from using this pen.

Most pod devices are very easy to use and this starter kit is no exception to the rule, which is why it is a great buy, especially if you are new to vaping or if you don’t like fooling around with refillable cartridges, settings, and wattage levels. Just attach the pod and enjoy! 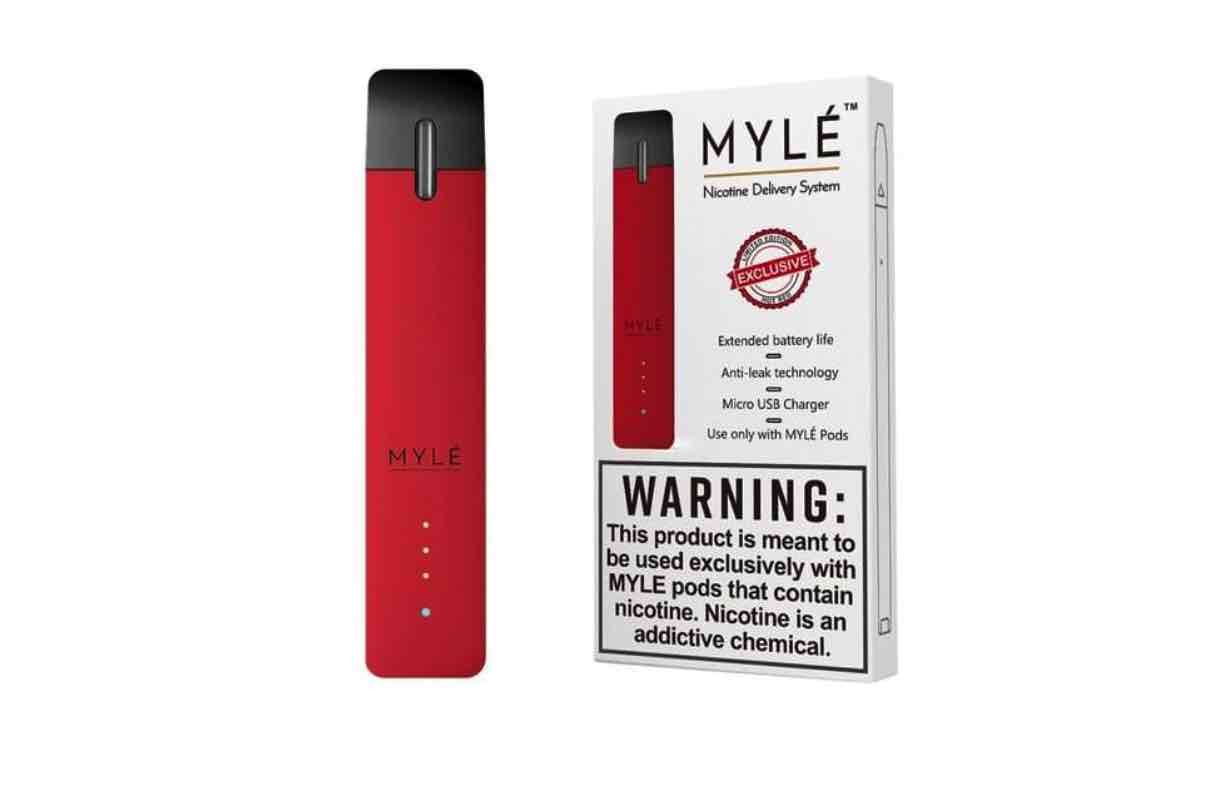 How to Fill/Refill Your Device

Changing the pods once they are expended is easy.

Price and How Long the Pods Last

The pods are meant to last for around 240 puffs, and since each pod has a small window, it is easy to tell when they need to be changed. 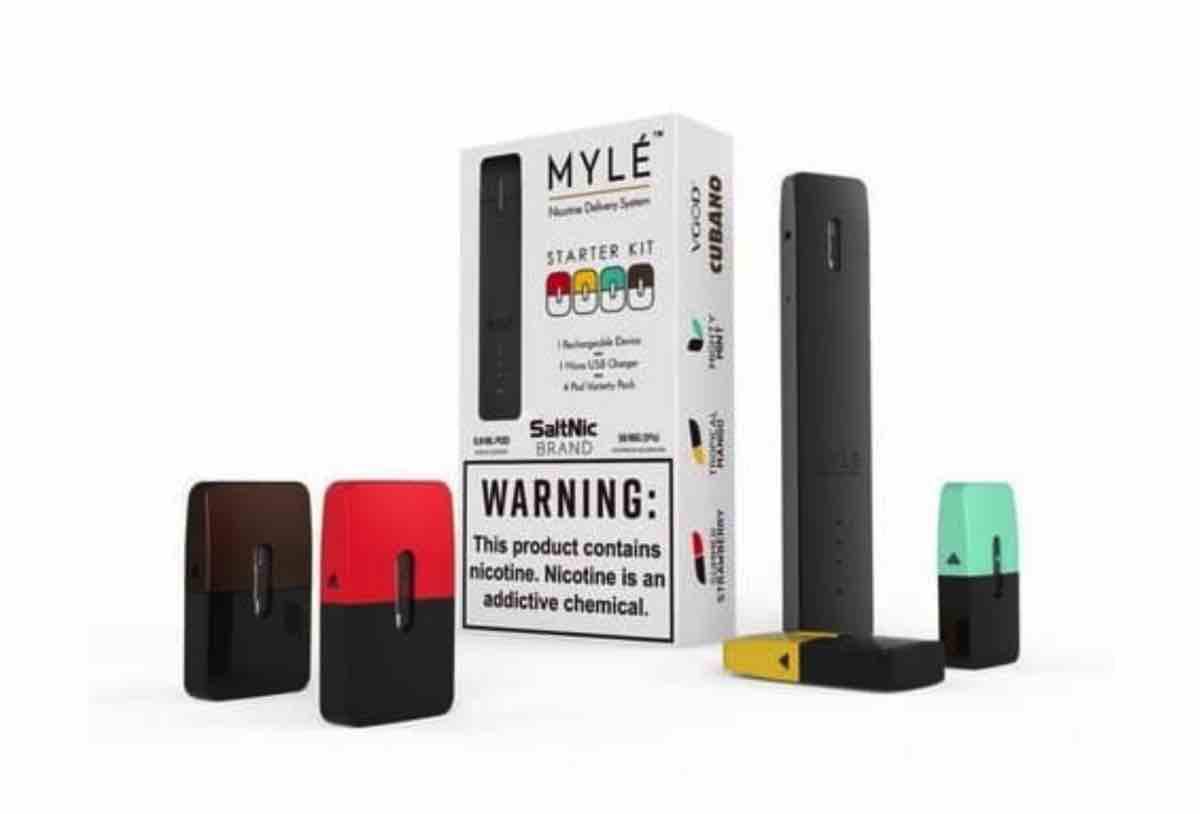 Myle Vapor pods come in packs of four and cost $14.99. This is a pretty good price to pay even if there are a limited amount of flavors.

A Vaping Experience You Won’t Forget

The Myle Vapor should give any beginner or experienced vaper a very good smoking session. As mentioned earlier, it is easy to use and it charges quickly, and since it is draw activated, there is no need to adjust settings.

The simplicity of this device is its number one selling point because it enhances the whole vaping experience. The device has very good airflow, and it delivers a very good mouth to lung hit.

The aluminum material they used to build it feels really good in the palm of the hand. When you are not using it, it can be kept in a pocket and the contents will not leak out and damage your clothing.

It is a little bit larger than a USB device, so you will not even notice that it is in your pants or shirt. Just do not forget that it is there or you might accidentally throw it in the washing machine with your clothes!

How to Open the Myle Vapor Pods

While the Myle Vapor pods for this starter kit are not designed to be opened and refilled, there is a way to do it. 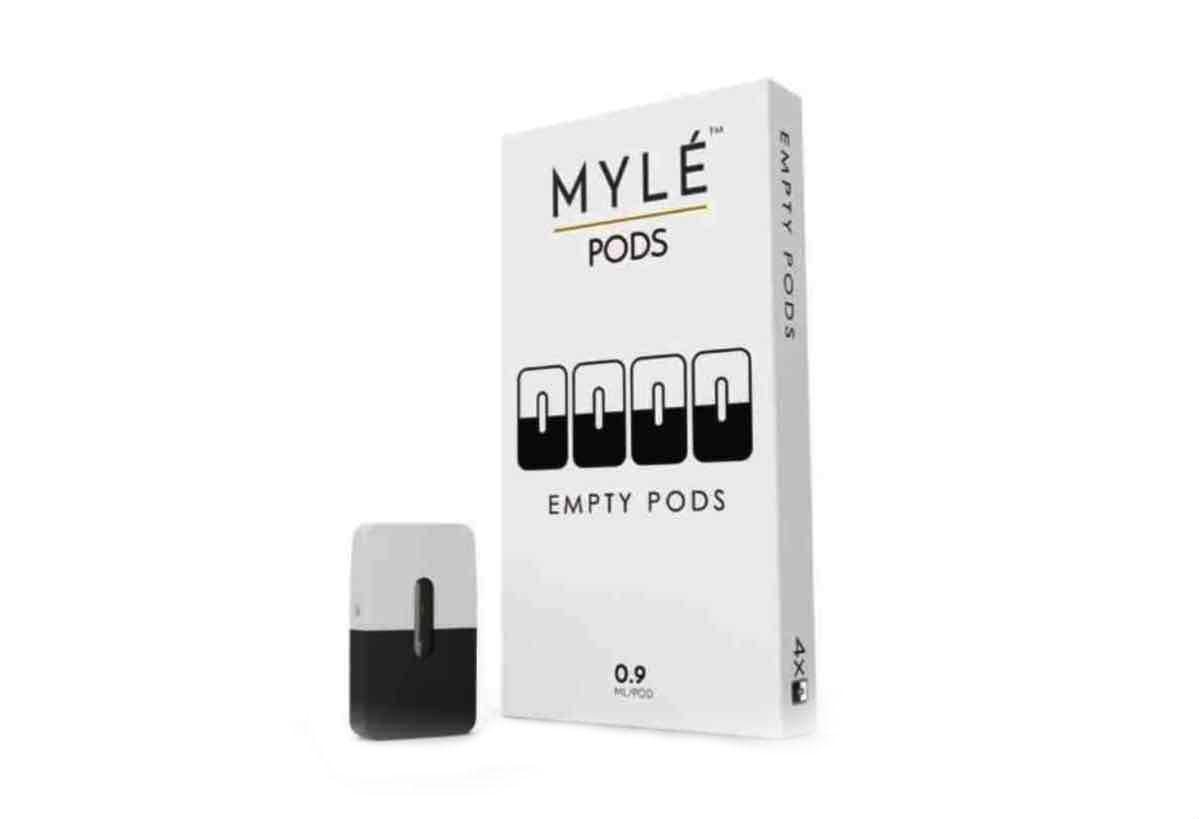 How to Use the Myle Vapor

Charging the device is simple.

There is no activation switch or button.

Sales Suspended in the United States

One huge drawback to using this device is that it is no longer being sold in the United States. Myle Vapor temporarily suspended selling the device to American customers because they and their distributors were having trouble with the United States Food and Drug Administration. 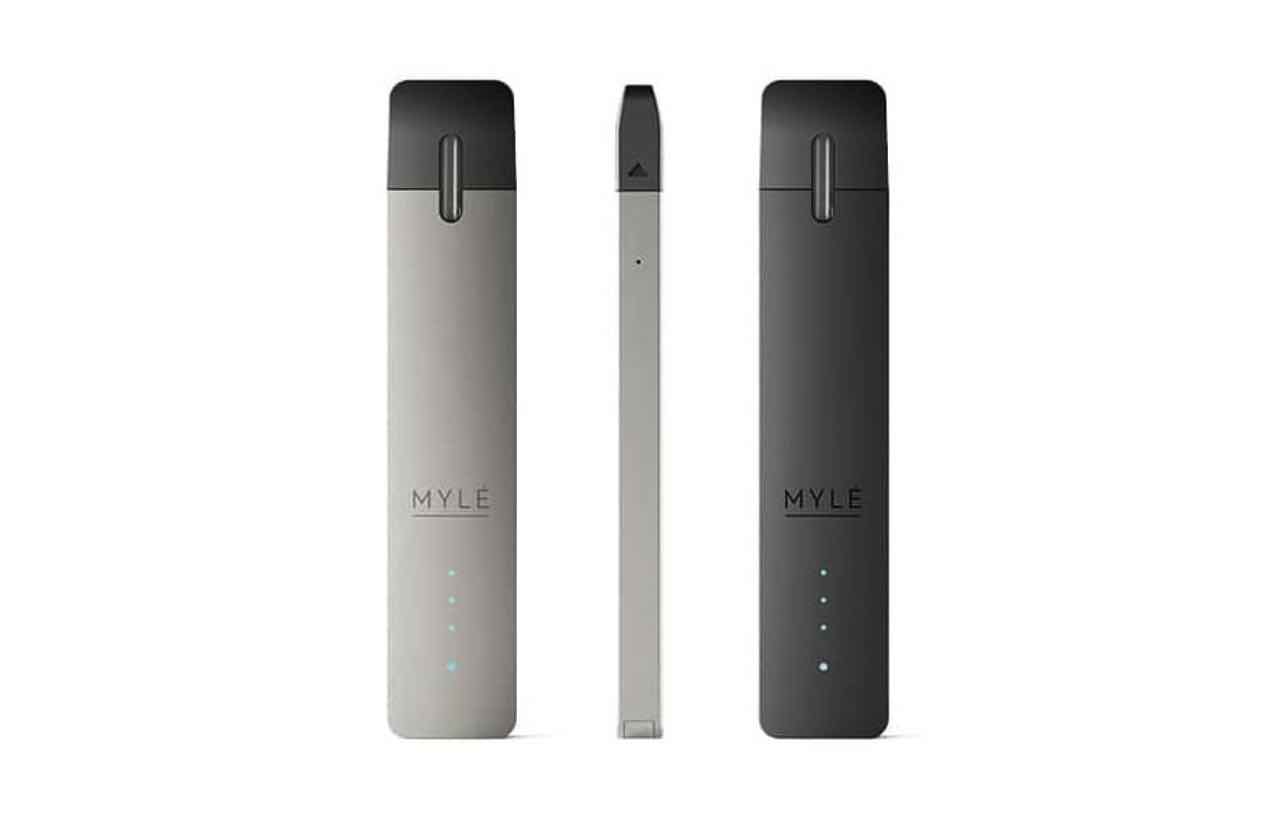 Once they are USFDA compliant, they plan on resuming business in the United States. One bit of good news is that if you are an American and have already bought a device, Myle Vapor will still honor the warranty.

This turn of events is very disappointing, but hopefully the company will be able to figure out how to satisfy American consumer safety requirements.

Both devices are very similar in design, but the Myle Vape is a huge improvement over its older competitor.

A major difference is that the Myle Vapor uses automatic LED lights to indicate readiness and battery life, whereas the with the Juul, you have to double tap the device for its indicator to show the battery life. 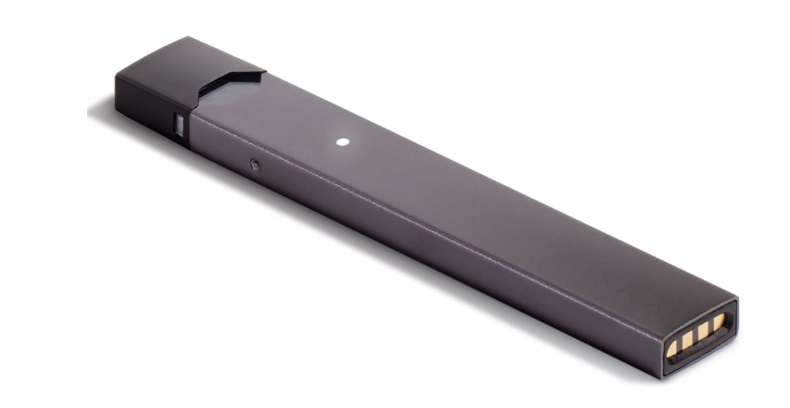 Another huge difference is the battery life and the longevity of the pods. The Myle uses a 240 mah battery while the Juul only uses a 200 mah, so the Myle is going to last an hour or so longer. The pods for the Myle device also have a larger liquid capacity at 0.9 ml verses Juul’s 0.7 ml.

These devices are both very good, but the Myle Vapor is newer and the designers seem to have made a lot of improvements over the Juul. If you want to purchase a device that holds more juice and can last longer, choose the Myle Vape.

Myle Vape vs Bo One

These two devices compare very well with one another. They are both meant to be portable and discreet, they are designed equally well, and both have satisfactory salt nic levels, but the Bo One has a slight edge. 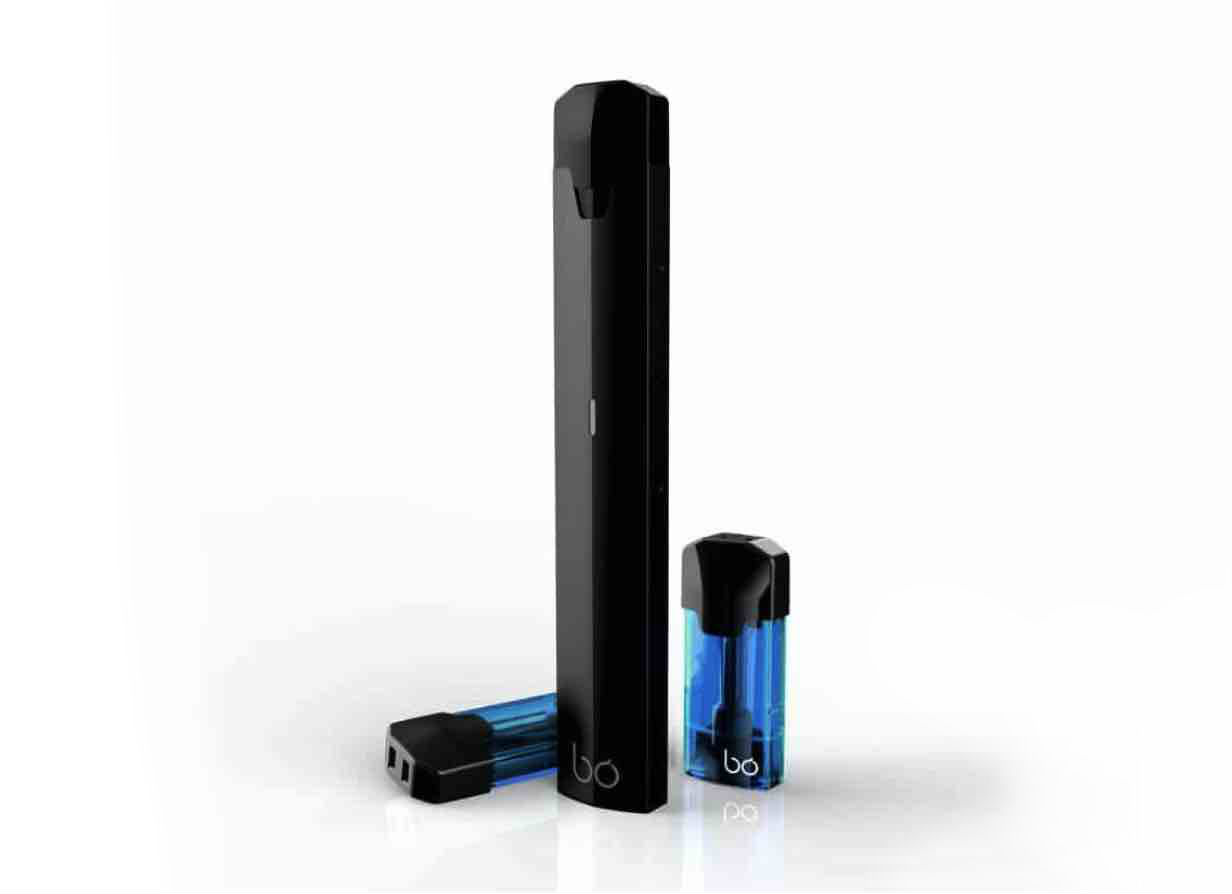 That is where the similarities end. The biggest difference is the battery life. The Bo One uses a powerful 380 mah battery which can last the entire day. There is also the matter of the flavors Myle Vapor has available, and the Bo One certainly outclasses them in that category, offering eight of them.

The Bo One is slightly more expensive, though, selling at around $35.00. Both devices are good and have a lot to offer, but the Bo One is a superior vaping device hands down.

The Myle Vapor is a great device, especially for the asking price. It is simple to use, easy to charge (and fast to charge), and it can last almost an entire day depending on how heavily it is used.

The simplicity of the device and the quality of the flavors and the nicotine delivery are the biggest things going for it (especially tropical mango), and its ergonomic design is a huge plus, too. These features and benefits are great, but there are a few drawbacks, too.

All in all, though, this is a very good device, and the thirty bucks put toward it will be money well spent.