I feel like I should be delivering this review to you in the same booming voice that narrates monster truck rally commercials. What a title! The Zeus Thunder 2! Three amazing things rolled into one; a Greek god, his favorite weapon, and the number 2! Awesome! Awesome! Awesome!

And yet, when I finally saw the device I was surprised. It didn’t look at all like it’s namesake. It was quite a humble-looking mod; there were no lightning bolts etched onto the side or a muscular, but elderly-looking god throwing them at you from the box. 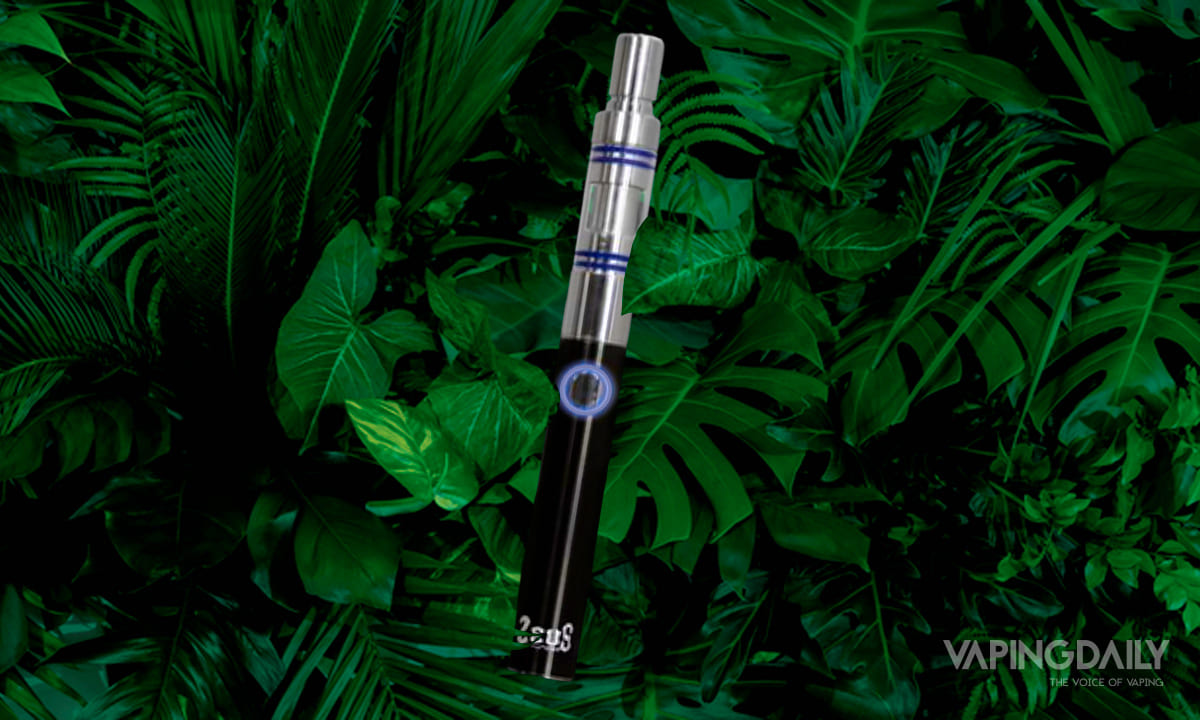 The Zeus Thunder 2 is a small but hefty wax pen weighing in at nearly 54 grams. The battery is a timid 650mAh (timid for a mod named after Zeus, the Lightning God), but because of the ceramic coil inside, the vape you get is well-measured and smooth, so you don’t need to be pushing a high energy battery.

The rest of the Zeus Thunder 2 is also somewhat timid. The atomizer comes with detachable metal screen attachment that supposed to act as a purifier, but that I found more of a hindrance than anything. But I was later convinced of the filter’s utility after I started vaping with the Zeus.

The mouthpiece and glass cover come easily off to reveal the atomizer within. Right above the glass casing is four blue o-rings (two above and two below the glass cover), which seemed like an amateurish design element and was yet another minus on the Zeus after seeing its underwhelming overall appearance. 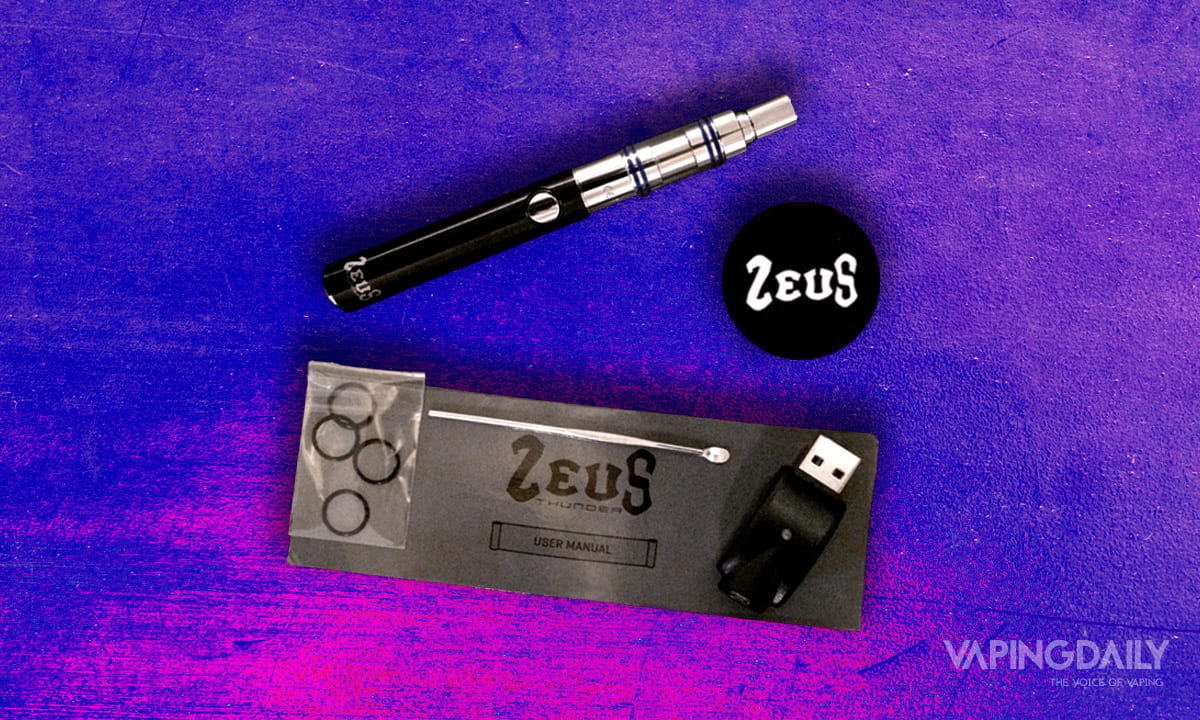 The Zeus Thunder 2 comes in a thin box that features the following:

I think my first impression was pretty clear. I was anxious to behold the mightiness of this fantastically-named wax pen. Alas, my second impression (which is what this section should really be called) was not so favorable.

Aesthetics-wise, the Zeus Thunder 2 is nothing so deserving of god status. It’s got a black battery and a metallic atomizer and does not come in any other color. The touch and finish of the mod was something else though; it felt durable without being off-putting.

Inside, however, was another story. The Zeus Thunder 2 is the latest concentrates pen that uses a ceramic disc or “donut” that heats up the concentrates in an even and thorough manner. This disc ensures enhanced flavor and also eliminates the possibility of damaging coils when loading the chamber, which, admit it, is something that’s happened to all of us.

There’s only one firing button on the Zeus and no temperature or voltage variations. So, it’s a simple, easy-to-use device that doesn’t require a lot of upkeep or maintenance other than occasionally replacing the wax tank every month or so. 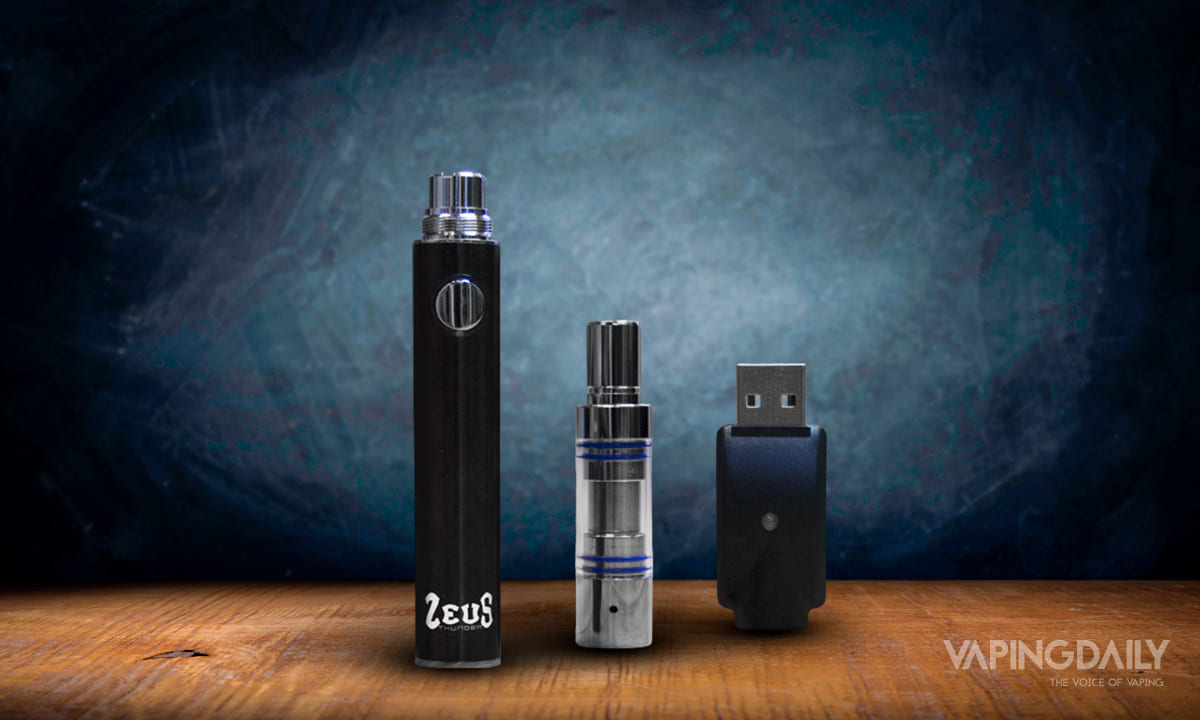 After being disappointed by the Zeus Thunder 2’s lackluster appearance, I decided to go beyond the surface and give the Zeus Thunder 2 a chance to wow! Me. The previous iteration of Zeus Arsenal’s line was a three-in-one vaporizer that had the traditional heated coil system.

But those days are long gone now, with the new, everybody’s-talking-about-it round ceramic coil, which is a true Eureka! moment for how best to vape concentrates. Coils can heat unevenly, and cannot always ensure a consistent, flavor profile.

With the heated coil though, the concentrate slowly melts away, while proffering delicious cloud points, so that eventually it all liquefies and heats evenly. The mouthpiece and glass atomizer were great accessories in getting a satisfying, low resistance mouth-to-lung hit.

The vapor was positively doused with flavor, and I didn’t notice any hard, metallic burning taste which was probably due to the nifty purifier covering the concentrate chamber. You don’t see a lot of vape pens, especially wax vape pens, put an extra filter directly over the chamber. But this filter got rid of all those impurities without decreasing the flavor potential.

The device loads incredibly fast and easy. You pull off the glass mouthpiece, unscrew the metal filter attachment; you take a dab the size of a fennel seed and either scrape it along the chamber walls and fire the machine so that its slides deliciously down to the bottom.

You screw everything else back on; you unlock the battery with five clicks, which will light up the trigger and then fire the device by pressing the trigger and inhale away. 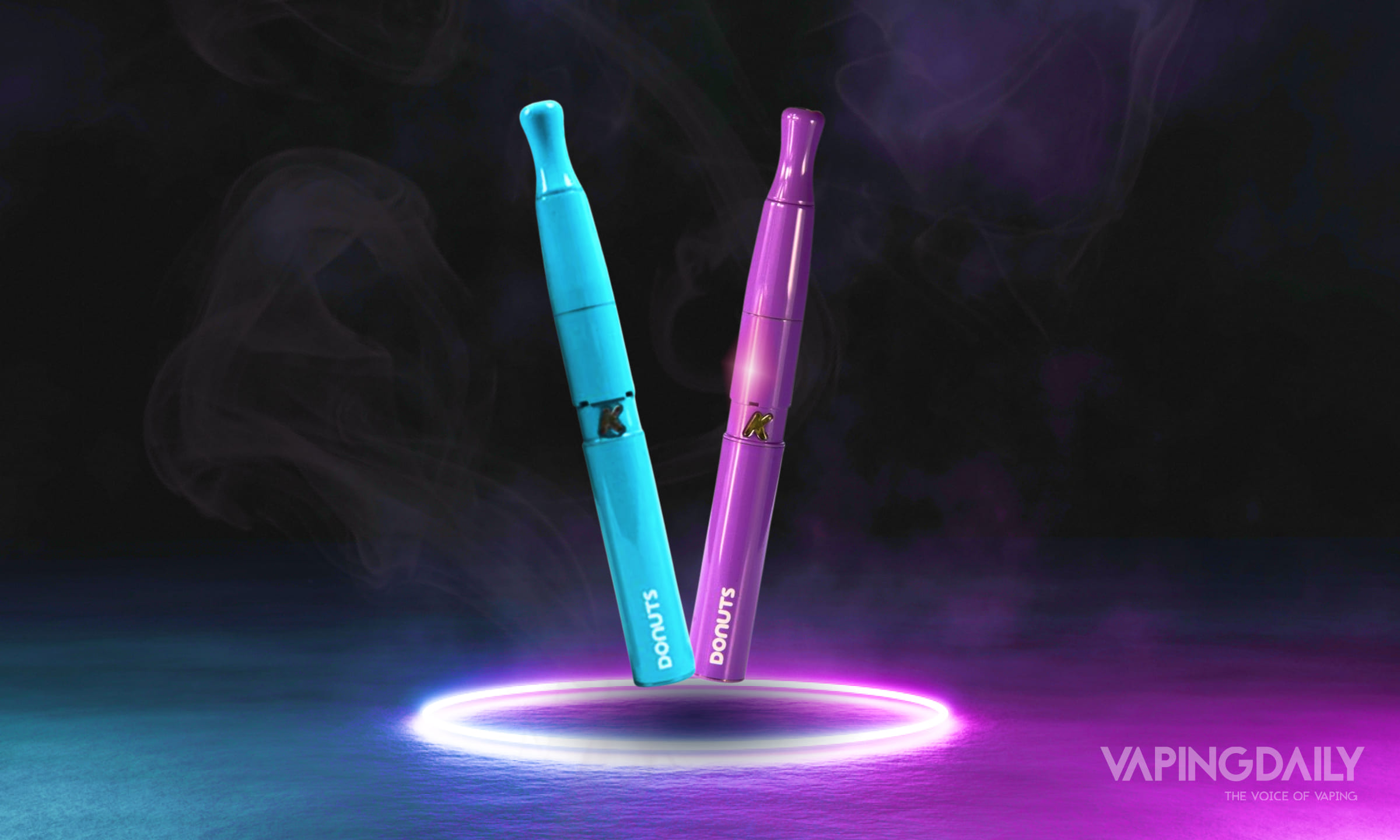 I just finished reviewing the Donuts from KandyPens which also featured a round, ceramic disc as a heating element. The Zeus Thunder 2 did heat up a little faster than the Donuts, which required at least a ten second wait time for it to give off a significant cloud.

But, and I know I sound so shallow and superficial, but the Donuts just looked better than the Zeus Thunder 2. The Donuts had a bit more style and attention to detail, compared to the Zeus Thunder 2’s unimaginative and sterile countenance. Performance and flavor-wise though, I did find the Zeus Thunder 2, with its added filter attachment, out-performed the Donuts by a wide margin.

I said this for the Donuts, and I’ll say it for the Zeus Thunder 2 – that ceramic disc deserves to be feted as one of the most important innovations in the wax vaping world in a long time. It’s an inspired, flash of genius, that little disc. It makes perfect engineering sense; it provides an even, sustained heating, and eliminates the risk of getting any coils damaged or broken.

I started my pros section this time with the ceramic heating element, (since I mentioned it second for the Donuts) because I think it is what’s responsible for everything else I like about the Zeus Thunder 2. And the next thing I liked about the Zeus Thunder 2 was the impactful and full-bodied flavor of every vape. It worked like a dream; no dry hits; real, even flavor and a consistent texture to every inhale.

I don’t believe the Zeus Thunder 2 was intended to be a starter kit, but it still features a relatively easy to use setup, with minimal clean-up or maintenance of the device not necessary (thanks to the replaceable tanks).

I’m not entirely familiar with the breadth of the Zeus Arsenal arsenal, but I was expecting a little flash or sizzle from this Canadian company, especially with a name that has both “Zeus” and “thunder” in the title.

The price, at almost $90, is stretching it a bit too far with a device that doesn’t offer more than a wax pen with a round disc heating element. There were no other features or extras that came with the mod, so, for what it delivers, I would expect the price point to be reflective of its limited capacity.

Zeus Arsenal Thunder 2 Wax Pen: All in All

The Zeus Thunder 2 is a sturdy, reliable wax or concentrate pen that doesn’t necessarily outperform the competition but doesn’t fall behind either. The draw was smooth, and the flavor profile was exceptional. It’s not a huge, ungainly device, but doesn’t feel like it’ll just disappear in my pocket given its noticeable heft.

I liked that the dreaded proposition of having to clean the atomizer tank was taken care of by the fact that you can just buy new ones. But with so many other manufacturers releasing dab pens with that wondrous ceramic ring inside, the Zeus Thunder 2 didn’t really take any pains to distinguish itself from the crowd.