The Wismec Reuleaux RX200 is a triple-18650 box mod with a three-button control panel and a small, 0.69-inch OLED display. The back battery door, where users install the three cells, is magnetic and features a sturdy hold.

There is an indented 510 connection atop the mod’s durable all-aluminum build. Beneath the 510 connection is a series of battery ventilation holes. There is a USB charging port right under the OLED display. Although charging the batteries externally is a better idea according to user’s box mods reviews. The USB port functions more as a way to let users install the latest downloadable firmware upgrades to the Reuleaux’s board.

As the Wismec Reuleuax 200W comes as a stand-alone device (no accompanying tank) the contents of the kit are a bare minimum. Vapers will still receive their equipment in the classic, top and bottom box covers with the mod supported in a foam insert. Inside, vapers will get the following:

The Wismec Reuleaux RX200 has a very straightforward outer and interior design. The setup of the unit, designed by JayBo, is so familiar it became the standard for triple 18650 batteries devices. The three cells inside the unit play a significant role in determining its size and shape.

The three batteries take up the back part of the device. Their arrangement makes it, so the device has a poly-angular shape. It is not round or square, but a mix of both, as anyone who has used the Reuleaux has noticed and like.

The unusual shape makes the device more ergonomic. Despite having three batteries, the Reuleaux stands only 3.3 inches tall. It measures 1.4 inches across so it can accommodate large tanks, which is one of the reasons for its popularity.

The back battery door uses magnets to stay in place while being very easy to remove as well. There is little to no battery rattle with the three cells installed. The weight of the device is noticeable, but with three cells inside, it is not unusually heavy. Due to what RX200 vape is known in reviews as a canonical type of best day-through mods.

The battery bay has clearly-marked positive and negative signs to help vapers install their three cells. The new Reuleaux, which has a Wismec chip instead of a DNA board, has reverse polarity protection built-into its board. The old one had individual contacts to run the batteries in parallel, where this new device runs its batteries in series.

At the top of the mod, there is a gold-plated 510 connection. The connection is not centered, but it leans more toward the front of the device. Still, the placement of the 510 is what makes the Reuleaux so versatile, as it can work with many types of atomizers. 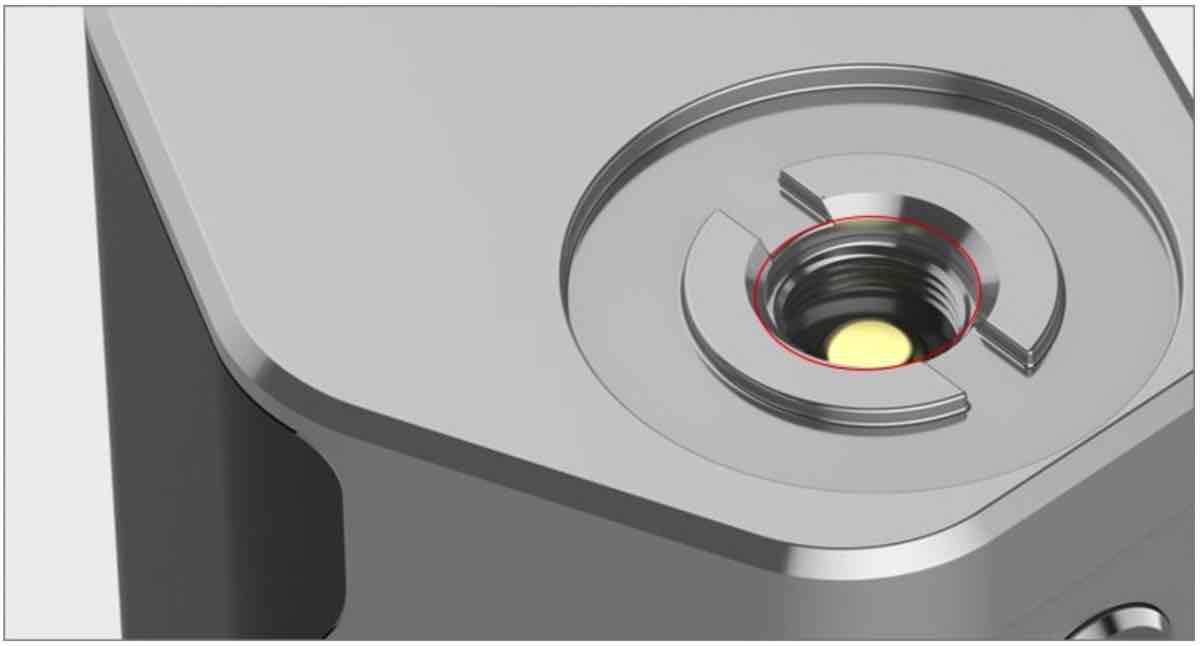 The screen and operating interface take up the front part of the mod. The JayBo-inscribed firing button sits atop the OLED. The two adjustment buttons take up the bottom half, along with the USB charging/upgrade port.

Performance of the Wismec Reuleaux RX200 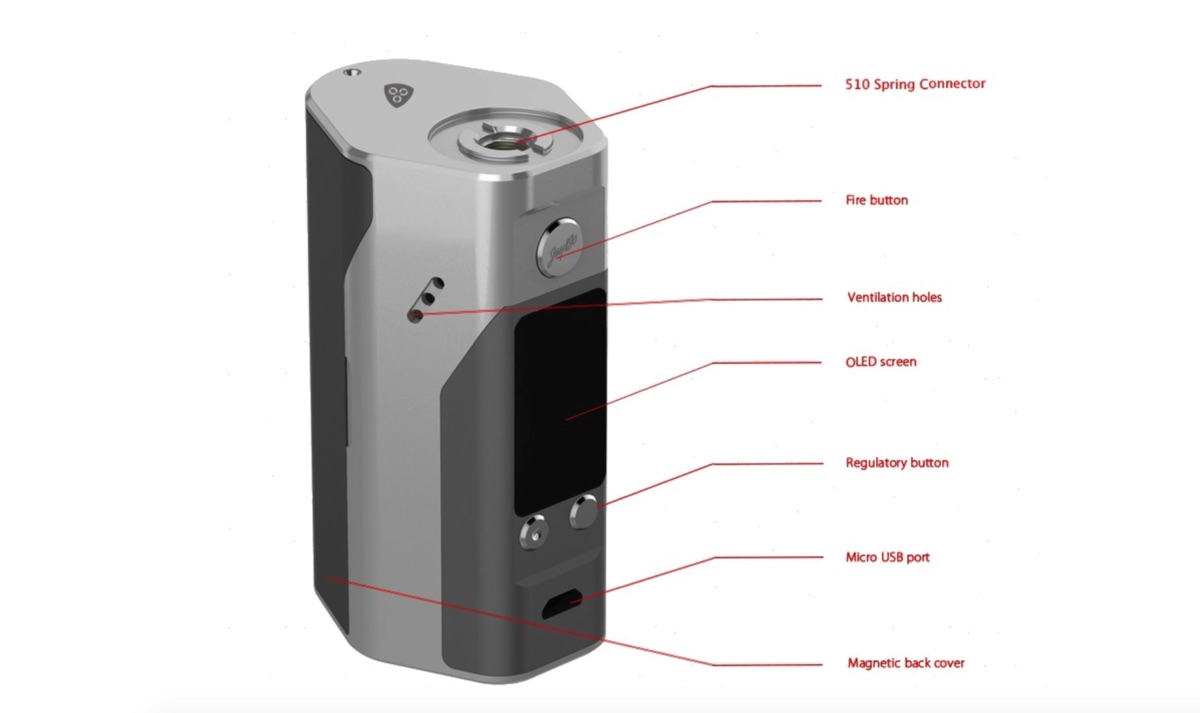 The firmware update also raises the operating capacity of the board to 250W from 200W. With its straightforward interface, the Reuleaux is simple to operate. The central firing button activates and deactivates the device. The power button is a bit more responsive than the previous version of the mod. It has a more clicky sound and makes the mod fire instantly.

Review of other button functions:

Vaping with the Wismec Reuleaux RX200

Wismec made the Reuleaux a triple-cell device to keep up the unit’s power output. Two cells can lead to uneven performance, and the device can slag when it is in operation. With the three 18650s running in series, the power output never falters.

Consistent power output is essential if the device is running at levels as high as 200W, which is the highest setting on the Wismec chip. Make sure to have a compatible tank and coil inside if you are considering vaping at such high-powered settings.

To be sure, the device performs well at lower wattages/temperatures. With a sub-ohm tank, the TFV8 Baby Beast tank, and coils rated between 70W-80W, the Reuleuax box mod worked comfortably. The vapor was still quality, moving to higher power output, and the mod did not struggle at all.

In temperature control mode, the device does struggle to restrict the heat, especially at the higher settings. A simple cotton burn test showed that there was some charring at the highest levels around 550F and 600F.

To get a better command of all the Wismec Reuleaux can do, here is a brief walkthrough on all its outputs:

The Reuleuax RX200S is compatible with Escribe software that lets vapers control every aspect of their vape. The board enables the full performance of the board, so it is always at 97% working capacity with little to no slag. There is also a minor difference regarding the screen. The price difference is not admirable, so it’s up to vaper to decide which is the best for own type of box mods usage.

On the Wismec Reuleaux RX200, the OLED screen measures only 0.69 inches. With the DNA Evol chipset on board, the screen for the Reuleuax RX200S is more substantial at 0.96 inches. The larger display helps in controlling and setting theReuleuax RX200S numerous functions, even though they are the same on the other models of the Reuleaux.

The Reuleaux DNA 200W carries a DNA Evolv chipset inside, which is different from the Wismec chip inside the other Reuleuax RX200.

The DNA version has many of the same features of the Wismec versions, but it does feature a more versatile temperature control suite. The DNA chip also enables the device to vape at high wattages and has downloadable software for vapers to customize their vaping experience further.

The Paranormal is a dual-18650 device that has a DNA Evolv chip inside. The DNA chipset allows for a preheat mode, as well as memory settings for temperature control, and a ramp-up time functionality. The Paranormal has a bright, multi-colored OLED display, three-button operating configuration, and a leather-wrapped battery door.

The Wismec Reuleaux RX200 is an institution in the vaping world. It set the standard for the shape, functioning, and appearance of every triple 18650 mod to come after. Despite being a trend-setter, many other mods have surpassed this one in terms of functionality, features, and performance.

It is still up to the job of pumping out remarkable clouds, though as long as the batteries in the bay are fully charged, and there is a good connection with the 510 pins. With its sturdy aluminum build though and its upgradeable chipset, users can keep vaping the Reuleaux for a long time.

The straightforward user interface allows for easy switching between the mod’s various outputs. The exterior holds up to frequent and repeated use, but should a part of the mod break, Wismec sells individual replacement parts.

Have you had the chance to vape the Reuleaux 200W? Is there a version of this mod that you like the most? Did you have any trouble installing the firmware from the Wismec site? Let us know your thoughts on the Reuleaux in the space underneath.