The iconic brand’s version of disposable and refillable e-cigarettes still have a long way to go in terms quality and performance. Without any bias to the famous name, however, it is fairly surprising to see some affordable options with Playboy compared to other less popular names. Then again, with very few selections being offered at the moment, Playboy Premium Electronic Cigarettes can be deemed more suitable for beginners and those who just want to try out vaping without expecting much.

A beginner’s starter kit and nothing more than the usual disposable device, the Playboy E-cigarette Starter Kit is a cig-a-like set includes one battery, two cartridges, and one USB charger.

If there is anything that sets this cig-a-like apart from other disposable e-cig brands, it would be the name that rings many bells. Other than that, since it is worth around $6 apiece, one should not expect advanced and durable features from this unit.

First off, the build on this e-cig is plastic, just like other disposable sets that are designed for a few uses before they ought to be disposed. All of its components are made of ‘light-weight’ materials that are enough to get you by.

The design, which imitates a real tobacco cigarette, is as simple as others at first glance. However, the details of the cartridge that look like a real filter, and the battery that is accented with fine horizontal lines, are both an exemplary attempt to copy the real deal.

Vapor production is comparable to the amount of smoke that you can get from a cigarette stick, which is probably the main purpose of its existence. Anyone who wants clouds of vapor coming out of their vapes should not opt for a cig-a-like. Beginners who want a taste of vaping, or those who prefer to look like they are smoking, are the target market for Playboy’s starter kit.

Playboy offers a few selections of flavors for their disposable e-cig cartridges, with tobacco garnering the most positive feedback from ex-smokers and new vapers.

For those who want zero-nicotine on their vaping kits, the disposable e-shisha from Playboy can be an option. With a sleeker and more fashionable design, the e-shisha has a more compact build and a crystal tip that lights up every time you vape.

Basing on its performance and features, the disposable e-shisha is a vaping device for newbies and intermediate vapers who need a better disposable e-cig than cig-a-likes. This vape works like any disposable would—simply inhale through the mouthpiece without having to press any button. One would say that vapor production is a lot better with this type of disposable e-cigarette, as compared to Playboy’s cig-a-like that sometimes even comes short in equating a real cig. However, without an extra cartridge and charger, the e-shisha is, in fact, a more expensive option that lasts shorter than the cig-a-like.

If you are up for a fancy piece of disposable e-cig without the addictive nicotine content, then the e-shisha is one vaping device to consider.

So far Playboy’s most advanced unit, the Premium E-Hookah is actually on the lower end of open tank system vaporizers on the market. The E-Hookah comes with a 1.6ml refillable tank a battery, and a USB charger.

At a glance, the Playboy Premium E-Hookah can be considered satisfying enough for those who want a more durable and advanced feel. It has a one-button activation system and works with as simple as pushing the button and inhaling through the black, plastic mouthpiece. 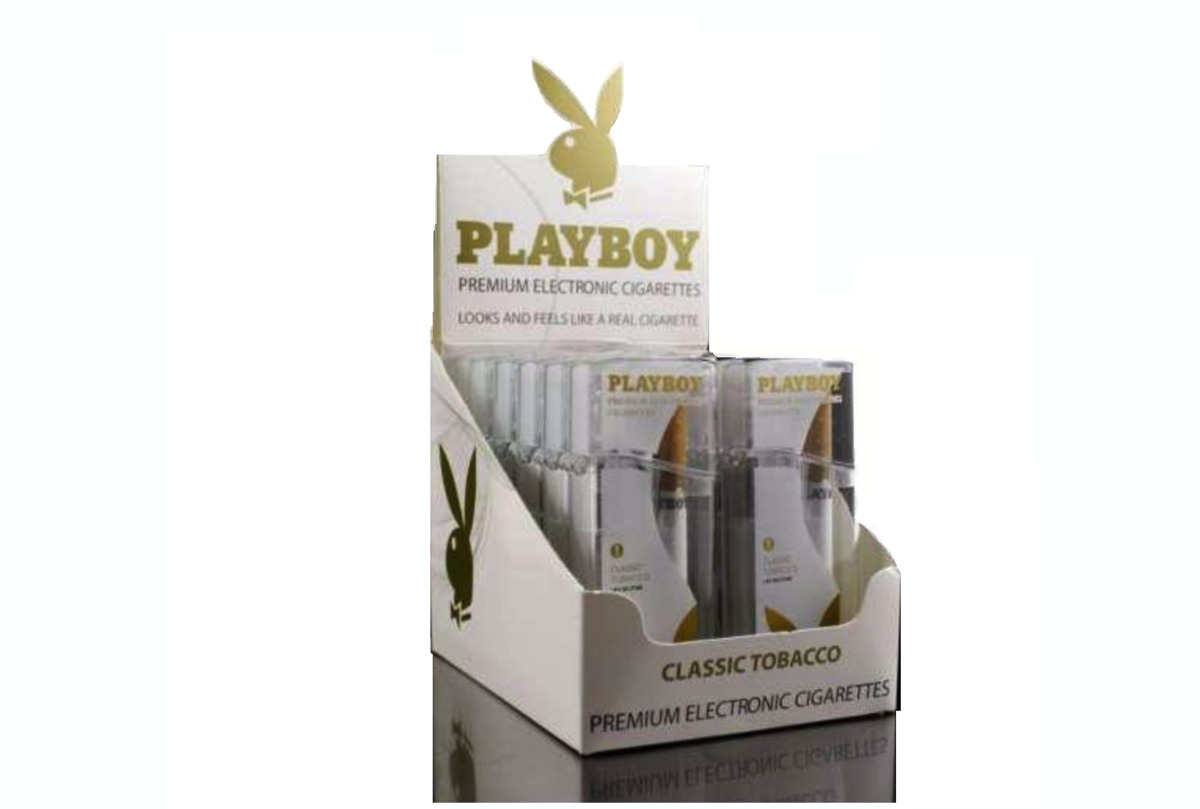 Vapor production is moderate—better than what disposable e-cigs give out but is far from what variable mods and other more popular brands within the same price range offer. From what Playboy offers, we are convinced to believe that their target consumers are beginners and those who are not looking for advanced mods, so far.

At $20 give or take, the Premium E-Hookah does pass for a beginner’s superior option and an advanced vaper’s spare.

With the Playboy name, we were expecting a higher price point, to be honest. So we were pleasantly surprised by the reasonable $22.99 asking price for the starter kit. With that base kit, you get a rechargeable battery, two refill cartridges, 5 flavor cartridges and a USB charger. It’s all the basics you would expect from a starter kit but with the added benefit of additional flavor cartridges.

They also sell an e-hookah starter kit, if you are interested in that sort of thing. And if you want to get refills for your e-cig, it will cost you $17.99 for a three pack. Once again, that’s a great price, since most of these retail from other companies for about $10 apiece.

Playboy’s e-cigs look like any other disposable electronic cigarette. They mimic the look of a traditional cigarette pretty well, and they aren’t really meant to last you for years and years. And because it is a disposable cigarette instead of something of much greater quality and cost, then you should not expect a lot of vapor production.

In fact, the vapor production of these cigs is kind of weak, resulting in a minor throat hit that gets the job done but just barely. Now most disposable e-cigs don’t give off a great vapor, but the majority of them still do a better job than Playboy’s efforts. That vapor is important because it is an integral part of the smoking experience, even the electronic smoking experience.

As it stands, Playboy eCigs are more suitable for first-time users. They are inexpensive and not of a great quality, which means they are perfect as an introductory product. Experienced vapers and those who want some nice vapor production aren’t going to be satisfied with what these products produce.

The flavors aren’t anything to get excited about either. The traditional tobacco flavor is probably the best one. It tastes a lot like the real deal, with a very authentic taste and a nice throat hit. But the other flavors really suffer from poor mixing or lackluster ingredients. There’s menthol, apple, strawberry and a few others, but most of them are fairly bland and lacking the kind of flavor and pizzazz vapers are looking for.

The standard refills are pre-filled cartridges. These are among the cheapest we have seen anywhere, and they come in seven different flavors, If you opt for the e-liquids, on the other hand, you can enjoy equally low pricing and choose from a greater variety of about 20 flavors. These add in some coffee and dessert flavors, but once again, none of them are really worth using for the long term.

Playboy Premium Electronic Cigarettes, as a beginner in the e-cig industry, has yet produced quality vapes that may hold up their trademark well. Nonetheless, with the iconic bunny rabbit on each of their e-cigs, it is expected that their e-cigarettes will sell—if not for the basic features that each one holds, they will definitely get sold to Playboy’s loyal customers.

Like any other disposable e-cigarettes, Playboy’s version on cig-a-likes and disposable e-shisha, and open tank e-hookah are not made for advanced vapers. None of them produce a vapor that is enough for cloud chasers, flavor for those who want some good taste in their mouth, and throat hit for vapers who want some kick as they inhale.

The design for all three products is integral in adding some class to Playboy’s basic vaping kits. Needless to say, each one does not appear cheap like many others do.

Playboy also offers their line of e-liquids with flavors ranging from chocolate, apple, and watermelon, to menthol, classic tobacco, and Butler tobacco.
On the whole, Playboy Premium Electronic Cigarettes are not as premium as we expected. Then again, they will pass as entry-level kits that bring along the name of a popular trademark for those who care less about vapor, flavor, and quality, but are more interested in carrying around their chosen brand.

One comment on “Playboy Vapor E-Cigs Unpacked – The Full Review”