Well, this isn’t much of a disguise, since the O2Vape Flip doesn’t try to disguise itself as anything. But it does perform well when it comes to becoming unrecognizable to the untrained eye when the cartridge is flipped back into the mod.

So in that sense, the Flip is a lot of like modern car keys that flip out on the touch of a button. The part that gets concealed within the mod is the glass cartridge that holds the oil. The glass cartridge itself contains only .5 ml of liquid, but the 510 threading on most all of O2’s other cartridges means the tanks can be swapped out with tanks that have a greater capacity.

The Flip’s battery carries a lifetime warranty, and it is has a power output of close to 3.7 watts. The mod itself features built-in touches like a charging cable that wraps around the device, which makes it perfect for portability and stealth. And it also has an attached loop so you can hook it up to a carabiner for easy attachment.

The O2 Vape Flip comes in an electric blue box that has a slip-off cover on top. Inside the box you’ll find:

And that’s it. Most of the other parts usually found in a vape kit are already attached to the Flip mod, like the charging cable and the cartridge. 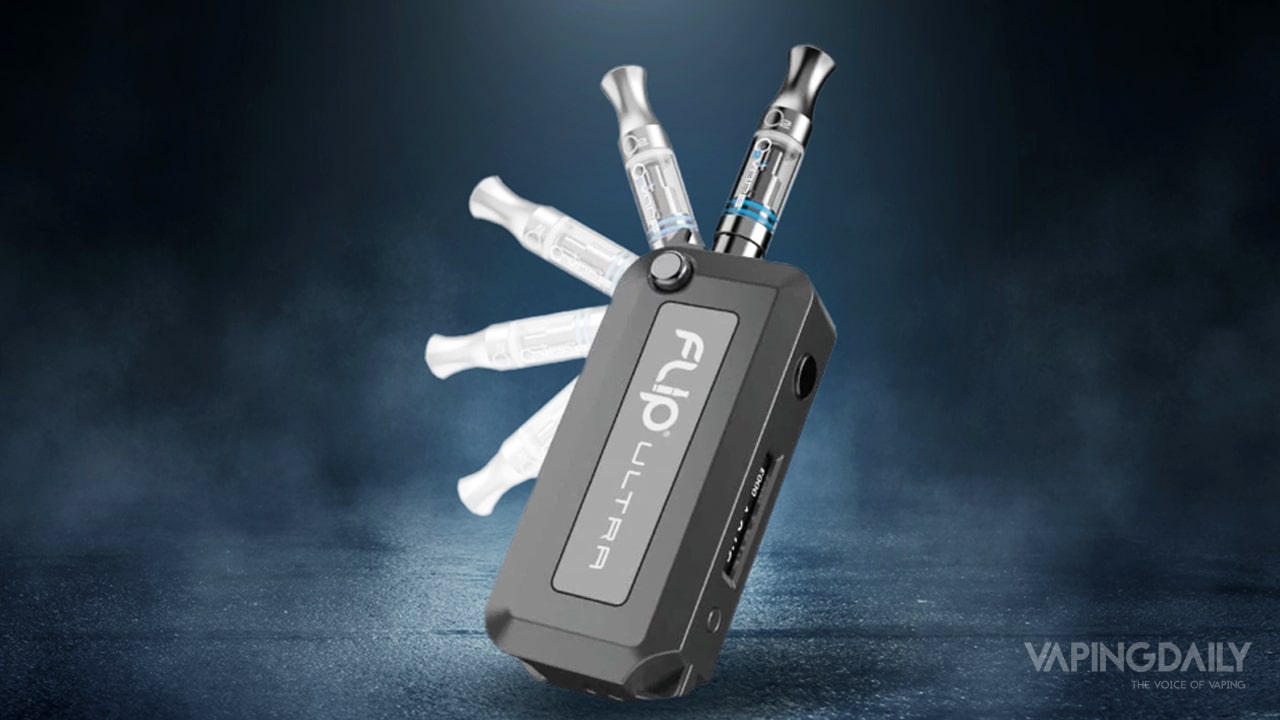 I mean, the Flip is a very straightforward device; it strives to be that simple. The cartridge flips out (like literally, not like, goes crazy) when you press the release button on the top-right hand side of the mod. It springs out like a switchblade of yore.

The Flip fit quite easily in my hand; I guess that’s exactly what it was designed to do. Flipping the cartridge out didn’t hamper my efforts to stay on the down low regarding my discreteness. There are no other adjustable options on the Flip so what you see is what you get.

The tanks have a 1.66mm fill hole that you can use a syringe to fill up your tanks. O2 also sells the tanks separately that can come either empty or prefilled with your favorite concentrate or e-juice, made by O2Vape of course.

The device charged relatively quickly, in about one hour. The firing mechanism is the only other button on the mod besides the cartridge release button. You just click the button five times to turn it on and then hold to fire the device, which will also turn on an LED indicator light.

For an oil vape pen, the O2Vape Flip has some great flavor production. The coils function over 1.2ohms so there won’t be any great cloud production or direct lung hits with the Flip. But it doesn’t forget its purpose to be a discreet, on-the-go device for ex-smokers looking to possibly kick their habit with the combustibles.

The O2Vape Flip was rather consistent in its flavor kick, no matter how many times I switched out the tanks or cartridges. The shell where the tanks hide in when in stealth mode fits any O2Vape cartridge quite nicely.

Pulling on the device, I noticed an almost immediate build-up of clouds in my mouth, so the draw was easy and didn’t require much intense hauling. The device has an automatic fifteen-second cut-off time, so when you didn’t use it, the battery would just go into sleep mode.

For a device that doesn’t have much room for adjustment (or improvement), I would put the O2Vape Flip in a contest against something like the Pax Era Vaporizer that also features a swappable, albeit refillable pod mod with similar battery power and output.

The flavor was quite consistent and powerful on the Pax, whereas the O2Vape Flip sometimes lost that flavor potential with each successive hit. Since both devices cater to the mouth-to-lung crowd that soaks up all that extra e-juice or oil, I still felt the Pax delivered a better vapor stream and with less effort than the O2Vape Flip.

The O2Vape Flip doesn’t have much going for it other than the fact it is a collapsible, easily concealable vape mod. Its tank space is a little too small for my tastes, and I don’t think anything really would have been lost had the mod made more space for a bigger tank.

The performance of the Flip is not above average. It was able to produce nominal hits of flavor with not much to say in the cloud department. The device retracted, yes, and was a great fit in hand and easy to put away. But for my money, I wouldn’t go overboard with a concealable mod, if it disappearing is its only entertaining and worthwhile trick.

I give the O2Vape Flip an easily concealable 6/10.