Vaping Statistics: How Many Vapers Are There? 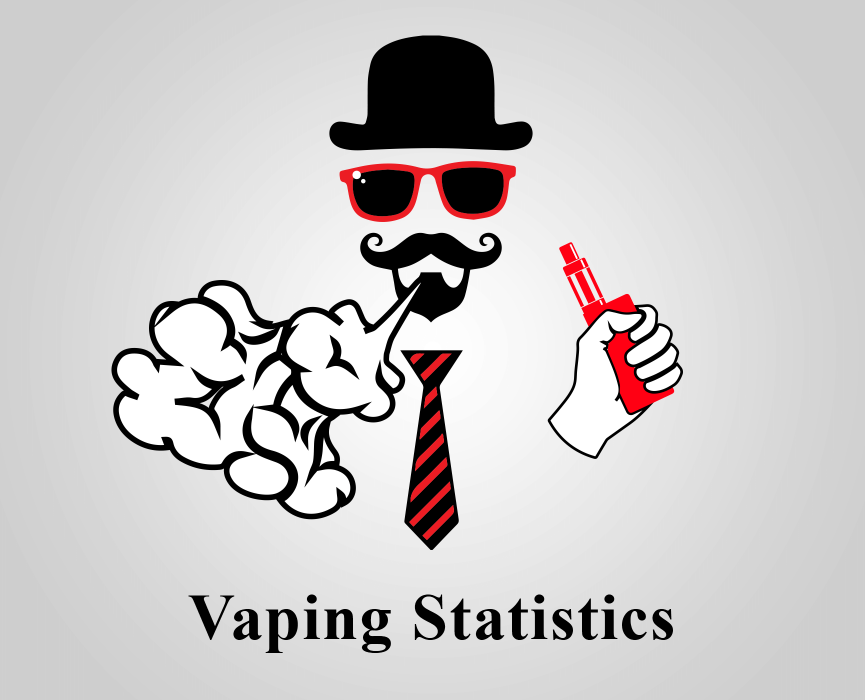 About 40 million US adults smoke cigarettes. Statistics show, at least one tobacco product, including e-cigarettes is being used by around 4.7 million middle and high school students. The percentage of British e-cig users, for example, has increased since 2012 and reached 60% by 2016.

The electronic vapor cigarettes started a worldwide phenomenon. E-cigarette use, known as vaping, increases every day around the globe. Even still, reliable vaping statistics are scarce.

New people join the ranks of vapers on a daily basis, so it is hard to keep track of them all. To grasp the worldwide reach of vaping, we have gathered and analyzed all the information on vaping we could find to discover just how many people in the world are vaping.

Data from the Centers for Disease Control (CDC), puts the number of Americans who had only tried an e-cigarette, as of 2014, at the following: 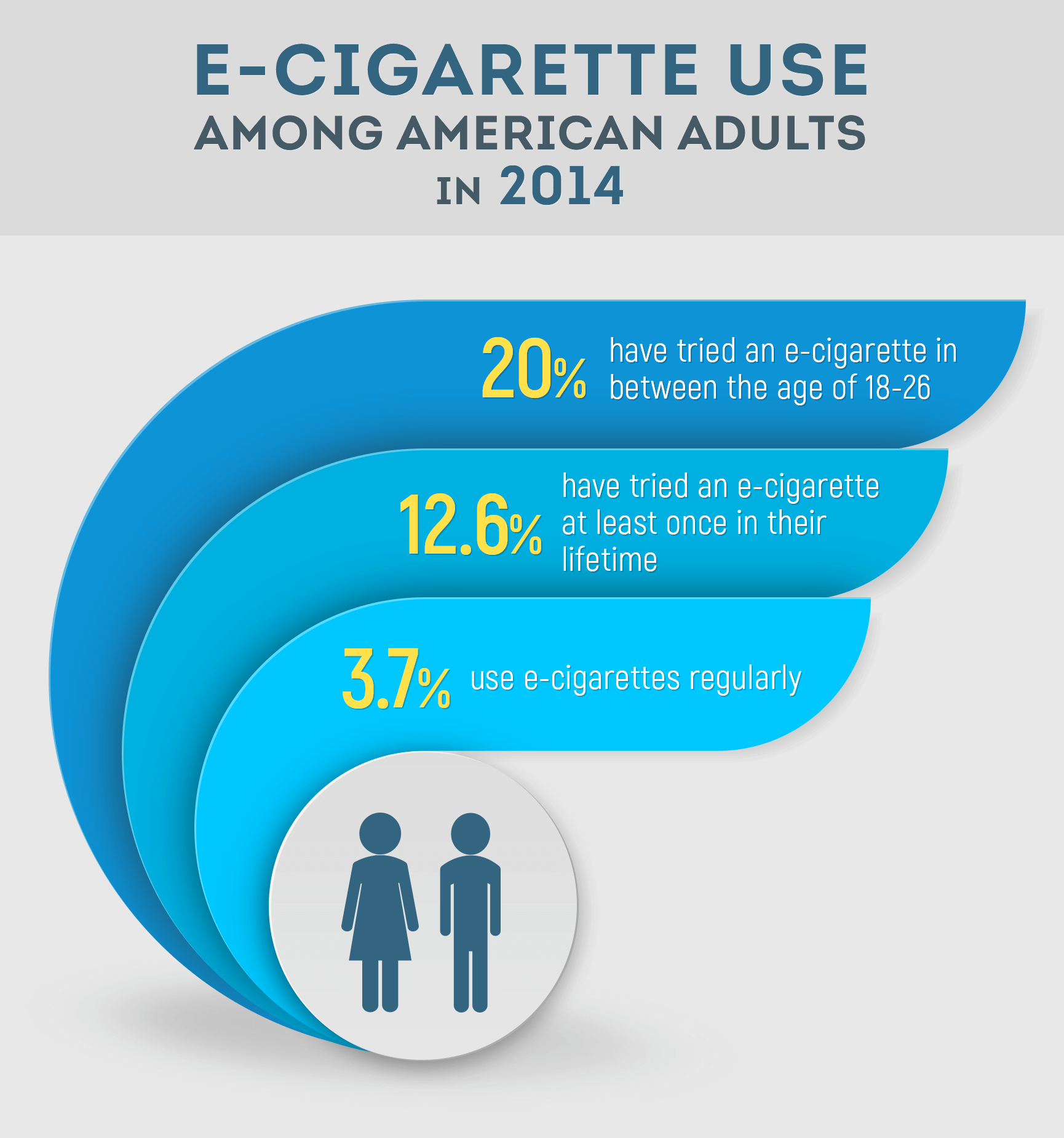 An even more revealing statistics from the Reuters poll is that 70% of new American users started vaping in 2014. There is no denying then that e-cigarettes are steadily growing in popularity, as more people are becoming vapers every year.

North and South of the border, vaping statistics for the same years, between 2013-2015 show that e-cigarette use in Canada and Mexico is nearly similar to the vape community in the United States. The two most glaring similarities being that vaping is most popular with young people and among men.

Researchers from Waterloo University, conducting an annual survey of tobacco use in Canada, also tracked the use of e-cigarettes, which almost mirrors e-cigarette use stateside. Their study showed the following in 2015: 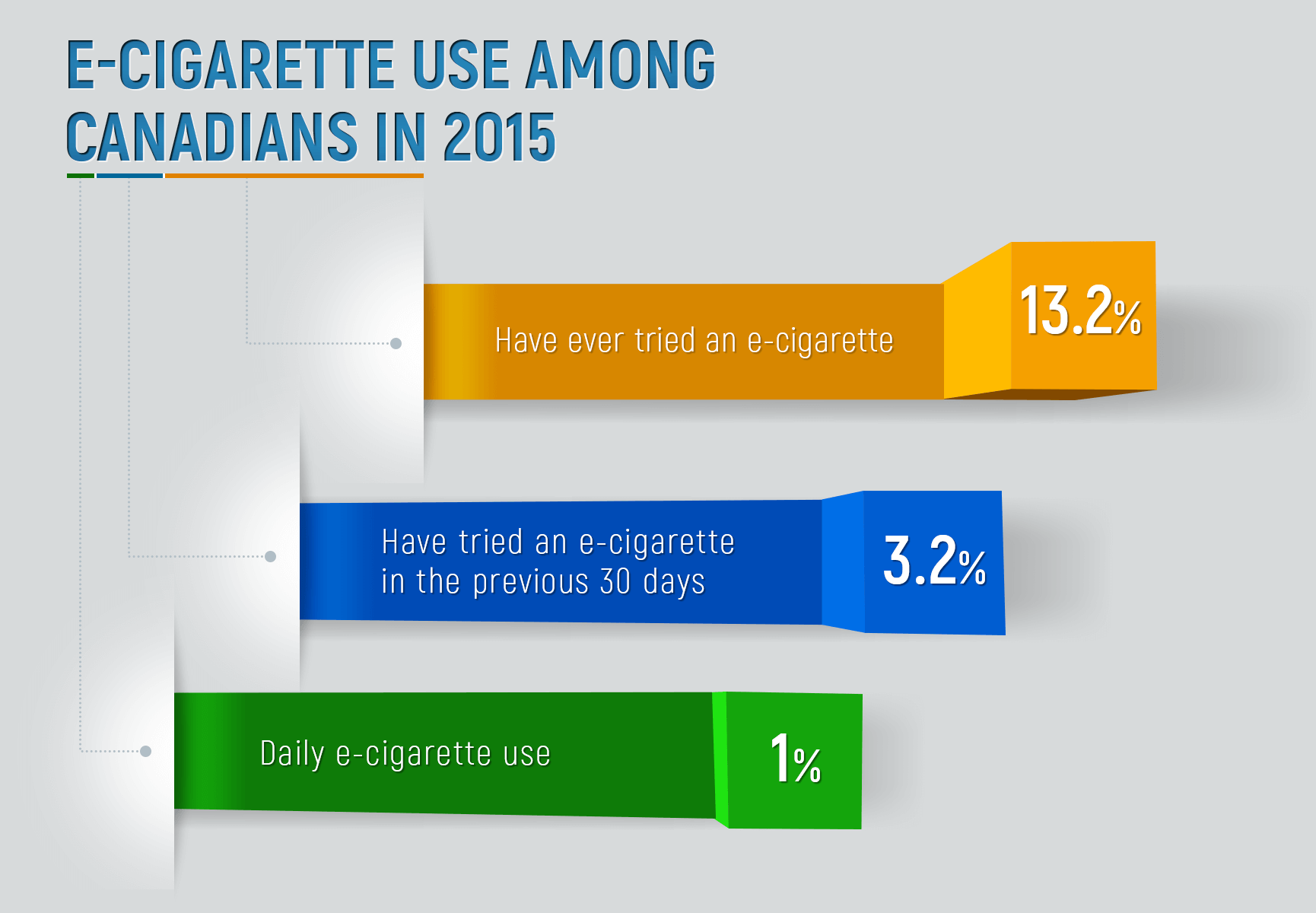 Mexico summarily banned both the sale and consumption of e-cigarettes in 2013. Despite prohibition, though, e-cigarette use in Mexico, especially among young people, has skyrocketed by almost 50%[1] in one year, according to the InterAmerican Heart Foundation.

These statistics provide a glimpse only into North American vaping habits. Vaping is and will always be a global habit. People all over the world have started picking up vaporizers instead of regular analog cigarettes.

Like the United States, Europe is also seeing a yearly increase in e-cigarette use. According to data gathered from all 27-member states of the European Union by researchers at Imperial College London and the University of Athens:

Strangely enough, increased use of e-cigarettes is not translating to a change in the perception of e-cigarettes, at least a positive impression. Perhaps due to the shortage of scientific facts about vaping, the amount of EU residents who viewed e-cigarettes as harmful also went up in two years to 51.6% in 2014, from 27.1% in 2012.

Non-smokers, however, who make up a more significant share of society and are generally better-educated, had an opposing view of cigarettes.

Asia is another part of the vape world that has a complicated relationship with e-cigarettes, which is ironic for two reasons:

Despite the connection e-cigarettes have with the most populous continent in the world, Pacific Rim nations like Indonesia, Malaysia, and Vietnam have out-and-out banned vaping products.

Singapore enacted a full-fledged ban on the sale, use, even possession of any and all vaping products in February 2018. Heavy restrictions on vaping exist in countries like Thailand, and on the Australian continent.

These bans have not stopped people from vaping, though. As with any behavior that becomes illegal, vapers have gone underground, which is not necessarily a good thing.

Operating in the shadows also means operating without regulations, or safety standards that would protect vapers from faulty, poorly made devices or e-juices with suspect ingredients.

Another сonsequence of driving vapers into the dark is that there are few ways to count how many people in Asia vape. People are reluctant, naturally, to identify themselves as e-cigarette users if the activity is considered against the law.

What can be measured, though, are sales figures [3], and they show that just like in other parts of the world, e-cigarettes are growing in popularity in countries like China and Japan:


A vaping-industry consultant, Jackie Zhuang, did caution, however, that vaping industry statistics are unreliable, given that companies are known to exaggerating their profits, so

it remains difficult to gauge just how big an impact e-cigarettes are having on the Asian market.

Nav Lalji, chairman of the Asian Vape Association and founder of the vape company, Mist-E cigarettes, conceded that e-cigarettes have a long way to go before they can compete with traditional cigarettes, mostly because of how much vapes are.

For one, combustible cigarettes are much cheaper than even the most basic vape kit: a pack of Marlboro’s cost $3 in most Chinese cities, while a vape starter kit runs for about $25. Not only that, but e-cigarettes incur recurring costs, which makes them even less attractive to most smokers.

In Japan, e-cigarettes are fighting not only conventional cigarettes, but the tobacco industry’s response to the vaping phenomenon, heat-not-burn devices or HNB. The iQOS from Philip Morris is being released nationwide in Japan, since e-liquids containing nicotine are heavily regulated in Japan, making typical e-cigarettes less appealing to smokers.

A combination of government regulation and intense lobbying from Big Tobacco has been what has effectively shut e-cigarettes out of the Asian market. These two obstacles are what ultimately make it difficult to surmise just how many people are vaping in Asia.

While unreasonable regulations, and the strong-arm tactics of global tobacco companies do not do e-cigarettes any favors, people are still finding it hard to separate vaping facts and myths.

Suspicion and skepticism about the safety and effectiveness of e-cigarettes have been around for as long as vaping has been around. Vaping health facts, however, are now prevalent.

There is no question that a puff on an e-cigarette is less dangerous than a puff on a conventional cigarette… because e-cigarettes create a vapor rather than produce a tobacco smoke, they generally deliver less nicotine to users than cigarettes do.

The question now central in people’s mind regarding e-cigarettes is “why do people vape” – a question difficult to answer, especially given the evidence that a majority of users, at least in the USA vape and smoke cigarettes.

Whether it is for their alleged health benefits or for their enormous economic potential, e-cigarettes remain poised to make even bigger splash around the world. Perhaps then, it would be easier to discover just how many people vape.

One comment on “Vaping Statistics: How Many Vapers Are There?”