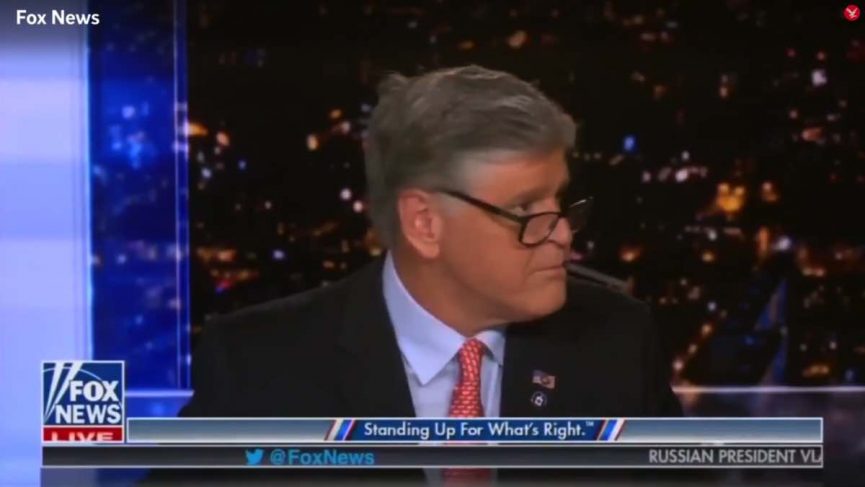 Vaping must be really catching on. In March, Sean Hannity, the host of Hannity Live on Fox News, was spotted with a vape in his mouth for a few seconds before he realized he was live on the air.

This was before he started a segment on Congressman Eric Swalwell rogering Chinese honeypot Fang Fang. After the segment about Swalwell tumbling the spying little bed trollop horse artillery style, Laura Ingraham teased Hannity afterward by sipping from a glass of water when the camera panned to her.

The gaffe earned over 600,000 views on Twitter and coverage all over the internet press. One commenter on the Independent asked Sean to smoke real cigarettes with an extra helping of tar.

So many odious comments piled up about it on the YouTube channel that posted the video that the channel had to disable the commenting section. Voice actor Harry Shearer said that watching the clip deprived him of 40 seconds of his life he would never get back.

Considering that Harry Shearer’s The Big Uneasy was an hour of this writer’s life he will never get back, it all evens out, doesn’t it? Stop trying to get above your station, Harry. Stick with the Simpsons.

Harry Shearer’s reaction was a normal one despite whatever one thinks about his movies and acting. He wished no one ill will with his Tweet, like in 2017 when Sean took a puff of e-cigarette on live.

Politics pervades everywhere, whether it is a sporting match or a 30-second blooper, and there is an approved ideological position for everything.

If you are on the wrong end of the ideological spectrum, as far as that loser commenter is concerned, you are not a human being deserving of respect or possibly life. It’s an example of the “two minutes hate” seen in George Orwell’s 1984, and for some, Hannity is the target.
What kind of world will you live in when no one can laugh?

What do you think about it? Share your thoughts in the comments below!