For experienced vapers who love the flavor and the block-long vape clouds, a squonk mod is an option to crave for.

You don’t have to drip the e-liquid all the time, however, the downside to most of the squonk mods is the lack of functionality. Too many of them function like an ordinary mech mods, and that’s it. For those who want more control over their vaping satisfaction, there’s a new release available on the vaping market, the GeekVape GBox 200W Squonk Kit.

Instead of selling the squonk mod all by its lonesome, guys at GeekVape decided to pack it like a pro. There’s a whole starter kit with an advanced RDA, spare squonk bottle, and a whole bunch of accessories. Even though, the batteries, coils, and wicks you’ll have to prepare separately.

The GBox Squonker is quite a bulky mod. Although, the two-battery capacity and a large 8 ml squonk bottle are certainly an advantage. It has a triangle shape in diameter with rounded edges, which makes the mod ergonomic and easy-to-use. The sturdy build has a nice quality at first glance; I feel that if I dropped it accidentally, no detail could break or fall off.

I found the screen to be pretty small and way too outdated in its design as for a device of 2017. It has a protective glass which makes the screen itself too dim and hard to read, especially outdoors.

The main features I put below in a quick and consistent list so you can go back to it when deciding whether to purchase this squonk mod. Also, you may want to consider that the Variable Wattage mod on this device accepts coils with a 0.12-3.5 Ohm Resistance range. The TC mode accepts, respectively, 0.5 – 1.5 Ohm coils. And in TCR you can turn up your power up to 80 Watts.

Because the GBox squonk mod has a lot of functions to play with, for the initial vaping test I’ve picked my strongest 26 gauge Titanium coils to see how it’s going to deal with those.

I started from the TC mode to check if it was going to be accurate. The TC modes for different types of coils (Nickel, Titanium, Stainless Steel) have pre-set voltage and power options that work ideally with those wires and won’t burn it. However, I decided to make a little experiment and switched to the TCR mode. At the output of 430F, I set the 70 wattage rate. The Result? I must admit, there was a lot of vapor, but not too much. I got the intense taste with a satisfying warmth and throat hit. The coils, thanks to my wattage adjustment, heated up instantaneously.

After this, I decided to check out the Wattage mode at its highest. Would it be close to the promised 200 watts? So I switched the modes and took a cautious MTL hit. Honestly, I don’t recommend anyone do that because it almost burnt my mouth. Way too hot. The good side to it is that the GBox indeed has got the accuracy. Maybe, the AS Chipset made that customization so simple and precise.

Going down to 90 Watts I realized that I still got tons of vapor, while at the same time, my Halo Malibu e-juice delighted me with a heavenly, icy Pina Colada flavor. Probably, for most of the time I’d prefer the medium setting of Power, and as for the TC modes, I would set it to a little higher than average rate. 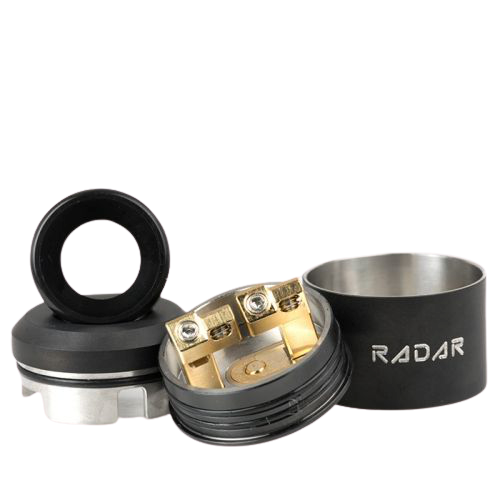 At the base of the chassis, you’ll see a tiny hole that connects to the squonk pin dipping into the silicone squonk bottle. At the top of the bottle, this pin is protected by a rubberized plug, ensuring that no leakage problems might occur. The pin supplies all kinds of e-liquids in a blink of an eye, even the most viscous ones. When your coils and wick are ready to go, you can press the fire button and see how abundantly the juice is flowing in. The top cap with the 810 drip tip is also pretty wide. You can see coils through it, so if you prefer to drip a few e-juice drops from the top, you can do it anytime you want.

The Radar RDA has a convenient side-mounted coil deck system. Grip screws are placed at certain angles. When you try to screw some big, chunky coils in there, you will find what a smart decision a kind of design like this really is. With the help of the small screwdriver that goes with the kit, the coil installation becomes effortless and pretty quick.

The GBox, I suppose, will be a relief to use for experienced vapers. If you know the problems of some RDA’s, squonk mods and box mods in general, you will be satisfied with the GBox. So many things got much more simple, and yet, more accurate and customizable.

However, if you haven’t been using an advanced box mod before, you will need a little bit of practice and knowledge to learn how it all is done. Batteries, coils, and wicks (maybe a separate charger for 18650) would be your additional expenses, so you need to think carefully if you are ready for them. Consider also, if you would be okay with constant maintenance for the sake of vapor.

In the end, another cool thing about the GeekVape brand is that they finally pleased Apple devices owners. Their two-in-one smart-charging cable has both micro-USB and Lightning sockets that connect to each other, and to the GBox on the other side. This way, you can charge your smartphone from your squonk mod, whether you’ve got any Android or Apple device.

The GBox vs. the Athena from GeekVape

The GeekVape GBox is the next iteration of the brand’s squonk mod series. So, let’s see what’s the difference between the GBox and the previous GeekVape squonk mod.

The Athena Squonk Kit features a mech mod unit and a 6.5 ml squonk bottle. So, as we can see right from the start, the GBox Squonker packs a few significant enhancements. Having said that, the GBox costs twice as much as the Athena. So, if you’re up to switching between the TC, TCR, VW and Bypass mode and want to vape for a longer time – pick the GBox with its dual-battery capacity and great abilities for customization. Yet, if you’re looking for a simple and functional squonk mod that fits in your pocket – the affordable and powerful Athena could be a more suitable option.

Worth It Or Not

Finally, we’ve got an advanced AIO vape mod. Meaning that it has everything you could think of in advanced vaping. Two batteries, precise control modes, the large squonk bottle, the smart-built RDA with two drip tip types. And you even get the smart USB charger! The screen is awfully dark, but it’s not a critical issue. It delivers the functions that it should, and I can live with that, although, my advanced user experience could be satisfied more. At the end of the day, if you’re looking for a quality squonk mod, my advice is this – don’t pass by the GBox!