The Challenges of Seniors who Smoke

“The benefits of quitting smoking are proven and immediate regardless of the age of the smoker.”

Elderly smokers are aware of this fact. A stereotypical view of seniors who smoke sees them as irrevocably set in their ways, who have no interest or desire in quitting. The opposite is true. An online survey of 1284 smokers in the US found that smokers over 55 years old had both more regret and were the most unhappy about being smokers:

Elderly smokers are eager to quit, but the elderly smoking population faces unique challenges regarding smoking cessation that other segments of society do not. We will explore those challenges, as well as examine the effects of smoking in the elderly.

Where it All Began

When most elderly smokers began smoking, as teenagers or young adults, cigarettes were not vilified. On the contrary, in the 1950s and 1960s, tobacco companies were free to market to children and young people, aggressively and nakedly.

A comprehensive study by Dorie E. Apollonio and Stanton A. Glantz, two leading researchers from UCSF, of the history of minimum legal ages (MLAs) to buy tobacco products revealed how tobacco companies went after the youth market.

A few takeaways from the study:

The existence of minimum age laws in the early 19th century reveals that even with the lack of scientific evidence about the dangers of cigarettes, people still believed that children under a certain age should not smoke. This belief was so firm that 15 states banned the sale of cigarettes to EVERYONE, between the years of 1895 and 1921. The tobacco companies changed all this. Even after states began instituting minimum age laws after the First World War, the tobacco industry knew that age limits would affect their bottom-line.

A Philip Morris internal study of age purchasing laws put it this way:

“Raising the legal minimum age for cigarette purchaser [sic] to 21 could gut our key young adult market … Moreover 66% of all smokers begin smoking at or before age 18, 80% begin before age 21.”

Knowing all they did about young people and life-long smoking habits, the tobacco companies did all they could to make sure that they could still market and sell to anyone under the age of 21.

Risks of Smoking in Old Age 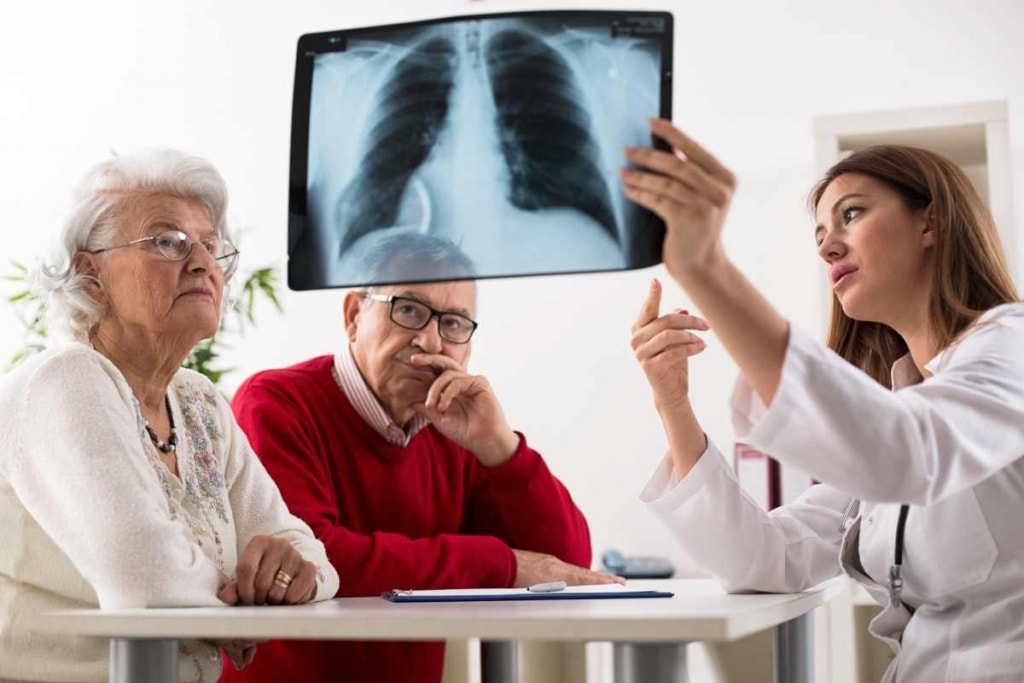 Did you know? 23% of heavy smokers (more than 20 cigarettes a day) do not reach the age of 65. Heavy smokers live 13 years less than people who have never smoked.

Even though smoking reduces life expectancy, smokers do survive until 65 and older. The question then is why elderly smokers continue to smoke, even if they do make it to old age and despite all that is known about cigarettes. Elderly smokers face the same risks to their health as everyone who smokes does.

Only, because of their age, the effects are more severe and irreversible:

Quitting smoking is something that should be encouraged especially among the elderly. Unfortunately, even medical professionals sometimes do not take advantage of “teachable moments” – when elderly patients are hospitalized for a smoking-related condition – to push aging smokers to cessation programs. 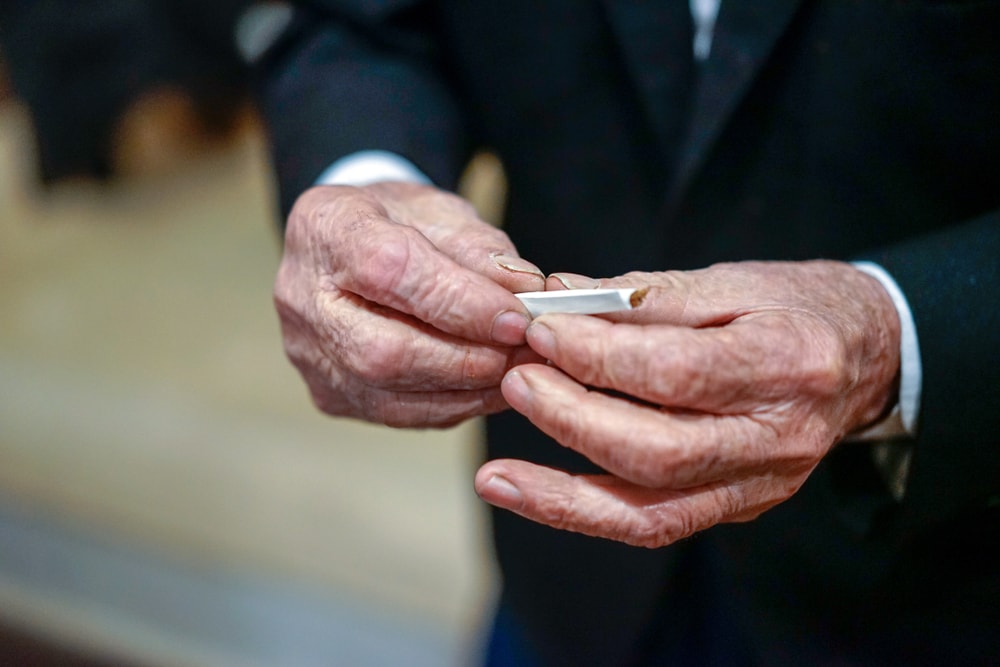 This age-based bias on the part of medical practitioners has further negative consequences:

The fact that doctors and nurses do not take advantage of a patient’s hospitalization flies in the face of evidence showing elderly patients do, in fact, benefit from this type of quit smoking advice.

An Australian study looked at the differences between intervention and non-intervention among elderly smokers. It found that among the participants who were encouraged to try NRTs, counseling, and other smoking cessation methods, between 20-25% were found to stay off cigarettes. The group who received no support did not stop or even try to quit smoking.

Health and Other Benefits of Quitting

The health benefits of quitting for smokers in old-age include:

Living longer – 23% of smokers who quit in their 60s had a lower risk of death compared to those who continued to smoke
Lower chances of getting sick – Smoking aids in the development of several age-related diseases, like strokes, heart attacks, COPD, emphysema, quitting reduces the risk
Lower risk of heart attack – Within five years of quitting, the chances of suffering a heart attack go down by 40% 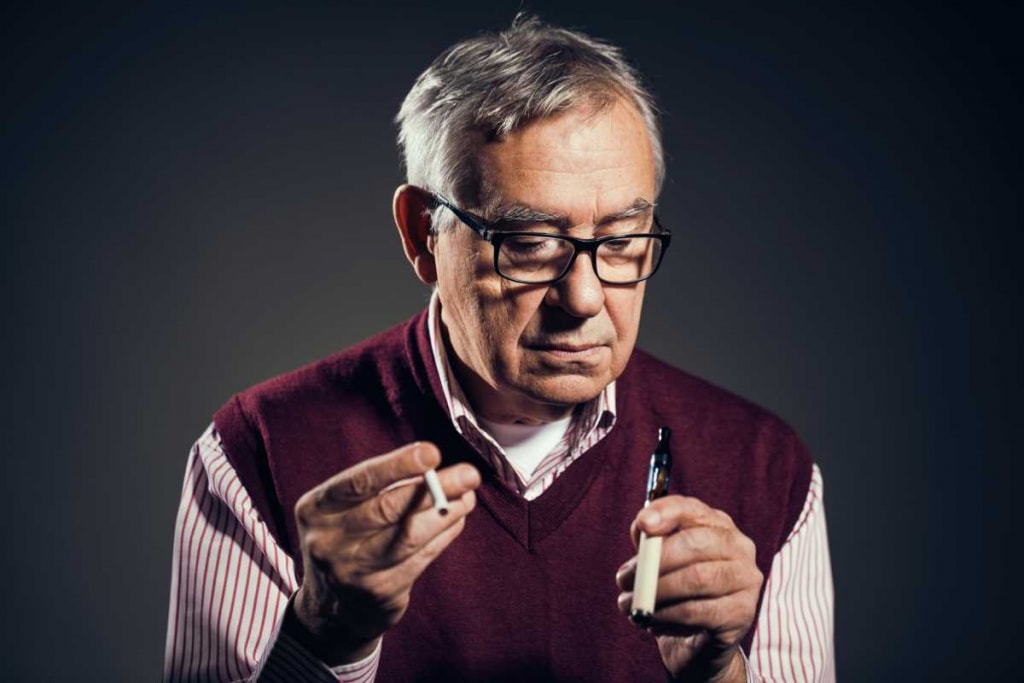 “Living longer – 23% of smokers who quit in their 60s had a lower risk of death compared to those who continued to smoke.”

Other benefits of quitting are:

Seniors who smoke have a higher chance of developing life-threatening illnesses, which is why encouraging them to quit is a crucial step. Stopping people from starting smoking remains the best way to combat all the negative consequences associated with cigarettes, but fighting a life-long smoking habit is also possible.

Getting elderly smokers to quit involves the same methods for anyone looking to stop:

A small segment of seniors is turning to vaping devices to quit smoking. E-cigarettes are not recognized by the FDA as smoking cessation tools, and there is a danger that seniors, like most people who vape, will become dual users. Meaning, they will vape, and smoke as well.

Elderly smokers need to have what anyone who wants to quit smoking needs to have: a desire to quit. When given the proper encouragement and support, seniors who quit are just as successful as anyone else.

4 comments on “The Challenges of Seniors who Smoke”