The Last and Only Solace: Veterans and Smoking

Serving your country while placing your life at risk every day can change the way you perceive the world. Cigarettes are often portrayed as the easiest way to deal with the stress of being a soldier. However, when the war is over, military veterans are left to fight one more battle, the battle against a vicious enemy called cigarette addiction.

Military service can have positive, life-altering effects on people. One negative effect that serving one’s country can have is that members (both active-duty and veterans) of the military can pick up bad habits, like smoking.

Smoking in the military has long been either excused, or rationalized as an essential part of soldiering. A smoking habit, though, can, and does, inflict real-world damage on a soldier’s health and ability to perform his or her duties. In this article, we will examine smoking, and its role in military culture, as well as the history behind this relationship. We will also ask why soldiers start smoking, whether it is more difficult for them to quit and what options are open to them to leave tobacco behind.

The Fight Back Home

Current surveys and research make clear, that veterans smoke more than the general population. A 2010 study confirmed this: 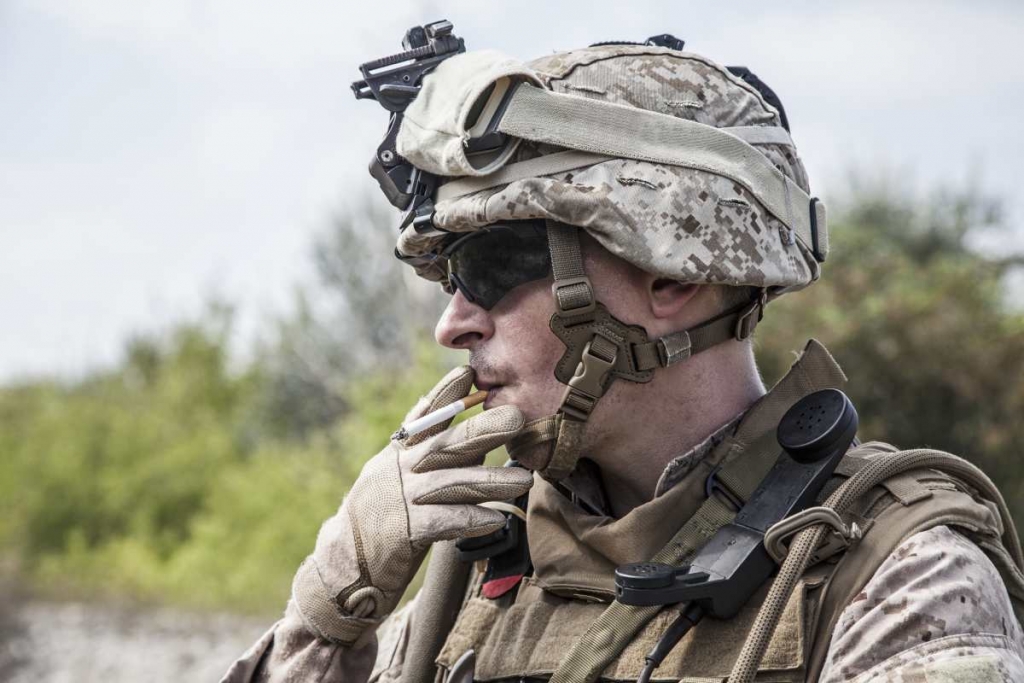 Smoking prevalence among US veterans is highest. For those with no health insurance (61%), for those living in poverty (53.7%), for those suffering severe mental health issues (48.2%). These statistics are disheartening not only for the fact that veterans, especially young veterans, are smoking more than the civilian population. They also shed light on how veterans are turning to cigarettes to cope with other difficulties in their lives.

Only, smoking creates more problems for veterans. Smoking puts veterans at risk for:

Smoking and the United States military have a long, complicated history.

During the First World War, tobacco was included in the daily rations of every American soldier, making the US government, at the time, the largest single purchaser of tobacco in the world. Other conflicts involving US military personnel have had the unintentional effect of creating more smokers among service members.

Smoking rates for the veterans of the Vietnam War were put somewhere between 40%-60% by various studies.

During the first Gulf War:

Wars in Iraq and Afghanistan

29% of veterans returning from the wars in Iraq and Afghanistan smoke, higher than the smoking rate (20%) for the general public.

The reasons for the higher smoking rates among active-duty soldiers and veterans are various. 20-year Army veteran Sgt. Raheem Ramsey put it this way:

“The smoke break is one of the most valued things among soldiers whenever they have some time to themselves … there’s very little else you can do but work, eat, sleep, workout and smoke.”

This is the most commonly held view: cigarettes help soldiers deal with the stresses of military life. It is a view that finds legitimacy when expressed by the soldiers themselves. One study regarding smoking and deployment listed four reasons service members gave to explain why they smoked: “Managing stress, boredom, anxiety, and sleep deprivation”; “Lack of alternate activities and privileges”; “The perception that dangers in the field trumps the health impact of smoking”; “The role of the military environment in encouraging smoking”. Only, evidence shows just the opposite: cigarette smoking has adverse effects on nearly all aspects of soldiering.

Given all these adverse health effects on soldiers, conventional thinking would dictate that military leaders would do everything they can to either help soldiers quit or prevent them from smoking in the first place. Except, the tobacco industry – dating back to the First World War – has capitalized on the perception of cigarettes as essential to military life. In fact, it is they who are largely responsible for creating this perception in the first place.

It was because of lobbying from the tobacco industry that cigarettes were included in soldier’s daily rations during the First World War. Ever since then, free cigarettes for soldiers was seen not only as a necessity but as a kindness to comfort fighting forces. This belief persists despite the real physical toll that smoking takes on service members. Aside from lowering the combat readiness of troops, smoking imposes an enormous financial burden on the military as well.

Costs associated with smoking in the military include: $534 million spent on direct health care costs each year; $345 million each year lost to reduced productivity and sick days related to smoking; In total $1.6 billion is spent each year by the Department of Defense on health care, prolonged hospital stays, and lost productivity caused by smoking. 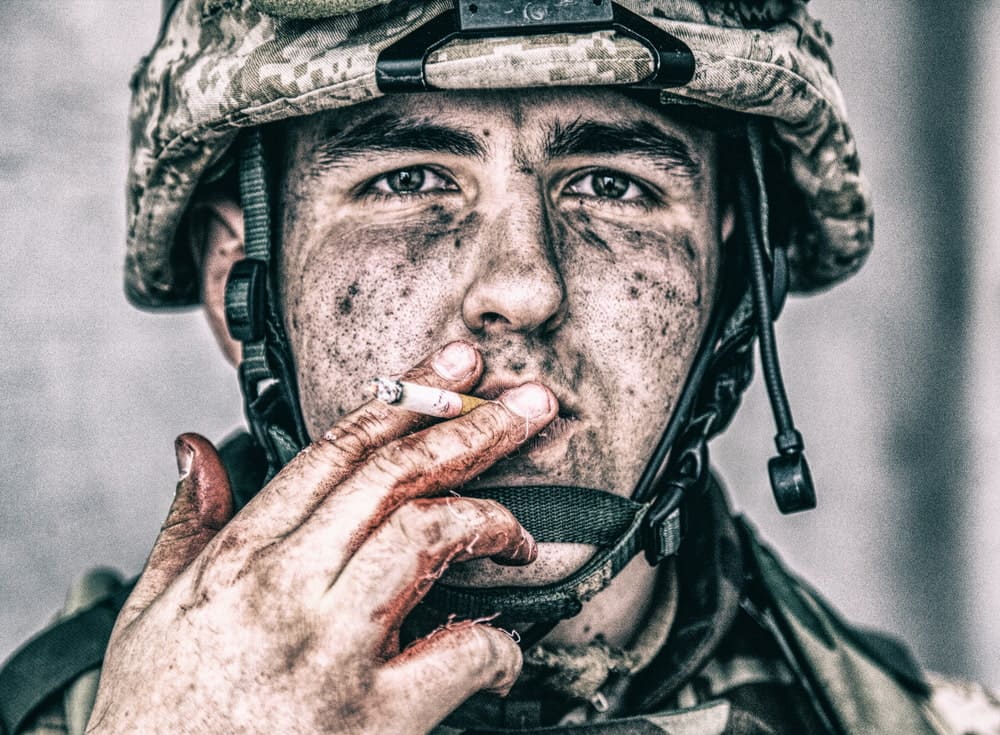 Add to these figures the almost $2 billion the VA spends on treating veterans with symptoms of PTSD, who also smoke more than other groups of veterans.

The Invisible Wounds of PTSD

Veterans with PTSD are another vexing problem for the United States military, both financially and culturally. The wars in Iraq and Afghanistan have created a new generation of veterans afflicted by post-traumatic stress disorder. PTSD is defined by the VA (Veterans’ Affairs) as:

“a mental health problem that some people develop after experiencing or witnessing a life-threatening event, like combat, a natural disaster, a car accident, or sexual assault.”

The symptoms of PTSD fall into four different categories:

The Department of Veterans’ Affairs puts the number of veterans who have screened positive for symptoms of PTSD at 13.5%, while other studies put the number higher, at between 20% or 30%. The connection between veterans who smoke and have PTSD is evident from the number of them who are heavy smokers. A survey of smoking habits of veterans found that 50% of veterans with PTSD smoke more than 20 cigarettes/day.

Conventional thinking goes that the calming effect of nicotine can help deal with the trauma of a flashback, and veterans with PTSD self-report that their symptoms abate with the help of cigarettes. What is even more tricky is that there is, as of yet, no reliable, effective treatment for people with PTSD. Cases of PTSD may be resistant to treatment, and the usual treatment of psychotherapy or psychotherapy combined with prescription medication does not work for everyone.

But how to weigh the temporary relief of a cigarette for PTSD symptoms with the long-lasting adverse effects smoking has on the body? It is not lost on veterans who have PTSD and smoke that smoking has harmful effects, but they are, more often than not, unsuccessful in their quit attempts. One researcher identified this dilemma, by writing, “The co-occurrence of PTSD and cigarette smoking … are likely to make smoking cessation particularly difficult for these veterans”.

Among veterans who smoke and suffer PTSD symptoms:

Veterans, because they smoke more, are at a higher risk of developing or suffering from: 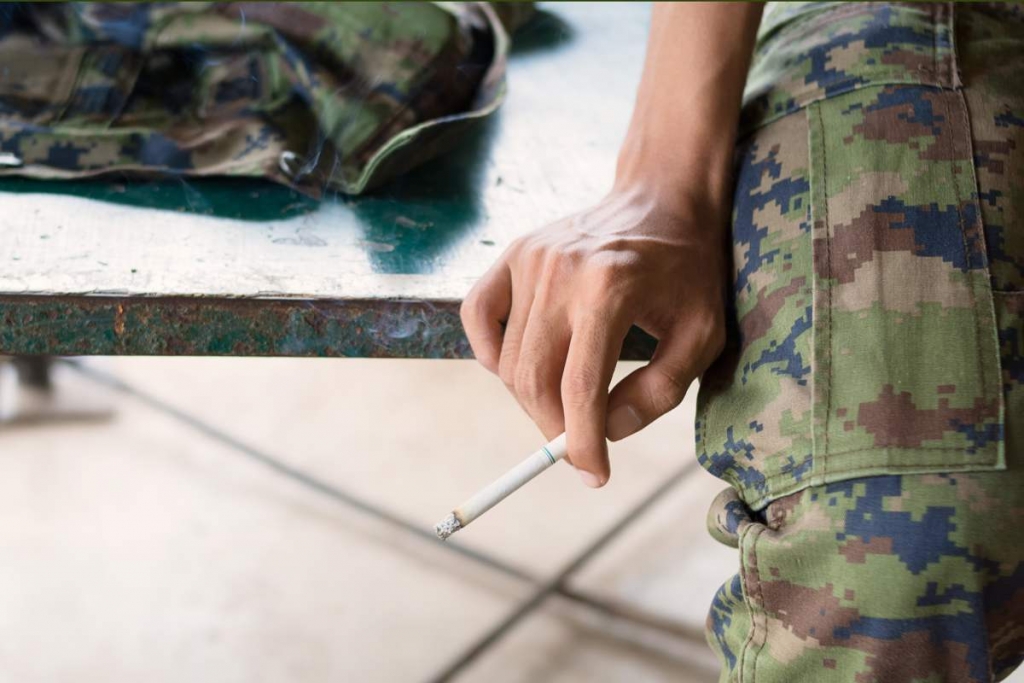 Although these increases are attributable to many factors, not just smoking. Even still, the military could be doing more to help current and former members of the armed forces quit. Although the Department of Defense and the VA, officially recognize the need for smoking cessation, standard tobacco control policies, like public-smoking bans, raising prices on cigarettes, do not apply to current or former military personnel.

“As Elizabeth A. Smith and Ruth E. Malone, two social and behavioral scientists at the University of California, San Francisco, wrote, “Tobacco remains culturally accepted, and a mixed message prevails: tobacco use is discouraged (e.g., donations are forbidden), but accommodated (e.g., purchase is facilitated).”

Cigarettes are still sold on military bases at a discounted price, even though that will soon be changing. Only, the VA is not as proactive in encouraging veterans to quit smoking, and veterans have only moderate interest in quitting, which experts say is responsible for their multiple, failed quit attempts.

For those former or active-duty personnel who do want to quit, the VA recommends the usual combination of: Quit smoking medications like Chantix or Zyban; Counseling.

Other ways veterans can quit include:

Vaping: Success rates for veterans from the research conducted at Miami VA Medical Center indicate the following, “…of 32 subjects enrolled, 7 patients (21.8%) successfully changed from tobacco to electronic cigarettes during 16 weeks.”

1-855-QUIT-VET: The Department of Veterans Affairs has also set up a special, quitline for veterans to receive telephone counseling, and quit smoking advice from trained counselors.

Veterans, as well as members of the general public, can also benefit from these quit smoking tips:

Fighting for Our Fighters

US veterans have carried a heavy burden for their country. Their fight has not ended though, even if they have returned home. In military culture, cigarettes are viewed as a vital crutch to help active-duty members, as well as veterans, cope with the anxiety, boredom, and stress of being a soldier. Given all the added problems – PTSD, depression, substance abuse, poverty, unemployment – veterans face when they return, smoking provides yet another escape.

Only, smoking IS a problem among veterans, as it leads to their early deaths from smoking-related illnesses, more so than the general public. While the government and military have been slow to recognize that smoking poses a threat to the veteran and active-duty population, steps are being taken to help veterans and all members of the military become smoke-free.

After all that they’ve been through, military veterans deserve to live long and happy lives. In order to do so, the entire community should engage in helping our heroes understand the risks of smoking and fight off the addiction. It’s the least we can do as a token of gratitude for their service.

2 comments on “The Last and Only Solace: Veterans and Smoking”