The MarkTen e-cigarette was among the first e-cigarette brands that were introduced into the North American market by tobacco giant Philip Morris. The brand appeared in retail stores around 2014 and was a mild success in the beginning.

The device followed the typical cig-a-like design, meaning it comprised a battery and a liquid cartridge that were screwed together. The e-cig function on draw-activation so users did not have to press any buttons or make any adjustments.

The MarkTen e-cigarette was one of the first commercially available e-cigarette products introduced into the market by Philip Morris. The device consisted – as many early cig-a-likes did – of a battery section and a flavor cartridge that connected to the power device. The device was draw-activated and had no buttons or controls.

The MarkTen was not a disposable device. Every starter kit came with a USB charger to recharge the battery section. Users could recharge the batteries and buy new flavor cartridges that came in a variety of different flavors and strengths.

Markten has discontinued its work and is no longer providing its products online. Times change and some brands come replaced with new trends. Despite the convenience of the device, it was outsold and outperformed by the much more popular and stylish Juul, which Philip Morris purchased a major stake in 2018. Shortly after, Altria discontinued the MarkTen.

Each kit comes with a USB charger that you can connect to your computer or laptop. Cartridges for the MarkTen e-vapor come in two flavors: Classic Tobacco and Menthol.

So far, menthol has more positive reviews than classic tobacco, but it really depends on your personal taste. MarkTen lovers mostly appreciate the minty flavor that comes with the menthol cartridge.

There are two nicotine levels being offered in each flavor (less than 2.5% and 2.5% by weight) for the e-vapor. If you want to taste something else out of this basic e-cig kit, then you can consider making your own e-juice, or checking out other brands that can be refilled onto this kit’s cartridge.

The best feature of the product is its size and look. It very much looks like a real cigarette, which is something that beginners will love. It is also very lightweight and is very convenient to carry around in a pocket. It has pleasant packaging that resembles that of a real tobacco cigarette.

The MarkTen e-vapor has two major parts: the cartridge and the battery. The middle part where the two are screwed together has a silver ring that is similar to the customary design of tobacco cigarettes nowadays. The end tip lights up every time vapor is drawn, imitating a real lit-up cigarette.

The cartridge that comes with the kit is flavored, although MarkTen only offers two flavors at the moment. Each cartridge lasts for about two hours of continuous vaping, but some experienced vapers have discovered that the cartridge can be refilled with e-juice to make it last longer. Otherwise, you will need to replace the whole thing to continue using the device.

MarkTen advertised a ‘four draw’ technology, which turned out to be four holes instead of one at the end of the cartridge. Advanced users say that this feature did not make the vapor any better.

This kit has a 90 mAh battery that is about 40 mAh’s lower than the usual kits. A beginner who simply needs a taste of vaping will be satisfied with the MarkTen’s e-vapor and can plan to get about 30 minutes to an hour of continuous vaping with it after a full charge.

Vapor production, as expected, is not as good as with advanced vaping kits. In fact, a long draw of the MarkTen e-vapor produces less than half the vapor produced by other cig-a-like units from well-known brands. But again, those brands and units cost double the price of this kit so this is quite understandable.

How to Use MarkTen E-Cig

Competitors On The Market 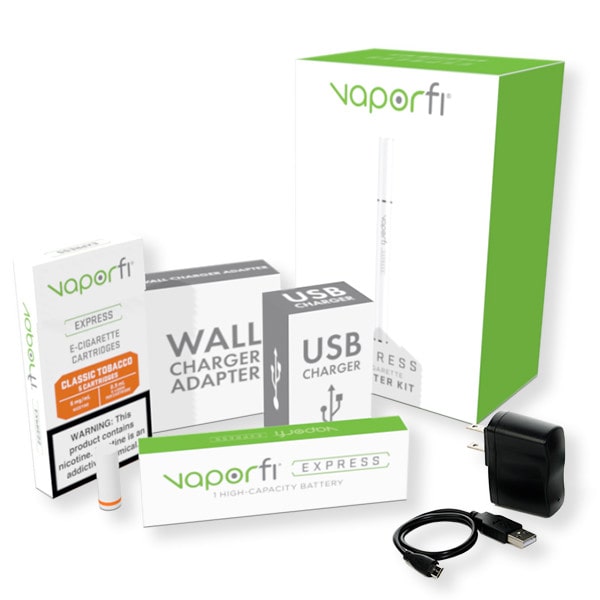 The VaporFi Express e-cigarette starter kit has one important feature over the MarkTen, namely that the former is still available for purchase and the latter is not.

The VaporFi Express e-cigarette has the same build and design as the MarkTen as it uses a battery and flavor cartridge. The battery is also rechargeable and a USB charger is included in the starter kit.

However, the VaporFi batteries have a larger capacity of 180mAh and 280mAh, respectively. The kit only includes a single flavor – Tobacco – but comes in four different nicotine strengths.

The Snaps Rev4 rechargeable e-cigarette from American e-cigarette manufacturer, ePuffer is an innovative product that is much more advanced than the MarkTen. Rather than using threading for the battery and cartridge section, the Snaps e-cigarette uses magnets so the two pieces stay securely in place.

Aside from that convenient design feature, the cartridges use airflow holes to create better vapor production. The battery is also larger in capacity than the MarkTen and VaporFi models, as it stands at 240mAh.

How long does a Mark 10 cartridge last?

A cartridge could usually last up to the industry standard of 200+ puffs. The device used a 90mAh battery, which meant it had short battery life.

But as the battery could be recharged, users could ensure that their flavor cartridges were fully depleted before tossing them.

How do you charge a MarkTen e cig?

Charging this e-cigarette requires the user to detach the battery from the flavor cartridge and then attach it to the USB charger included in every starter kit. Users could then plug it into any compatible USB port. Charging the battery took only half an hour or 40 minutes.

Where can I find MarkTen XL electronic cigarettes?

The MarkTen line was discontinued in 2018 and they are no longer available for sale anywhere. There may be some places on the internet where users could find an old version of the e-cigarette, but they would have to do a lot of searching.

Overall, it’s not really a disposable e-cig, hence the chargeable feature. But the price equates and even beats the disposable ones. And to top it off, it comes with a battery that can be reused and recharged, so this kit is not marked the lowest rate after all.

To conclude, the MarkTen brand serves as a convenient option for beginners, as well as intermediate users who are out of options and need a quick fix from the convenience store. Vaping with MarkTen’s e-cigs is the real deal in terms of style and discreetness; however, the flavor and vapor quality need improvement.

69 comments on “Markten E-Cigarette Review – What’s Special About This Cig-a-like?”