Users need to remove the parts from the pack, assemble the e-cig, and start puffing. The battery and cartridges are air-activated, but Mig Vapor also sells manual batteries. Users can choose from four different flavor options for the cartridges. The nicotine levels are also many, so vapers have different options to choose from.

The Mig Vapor Express Kit comes in a package together with two flavor cartridges, a battery, and the USB charger. The battery is the same type as other Mig Vapor product combinations, as it has a 510-thread up-top and a curved tip that lights up when a user takes a draw. 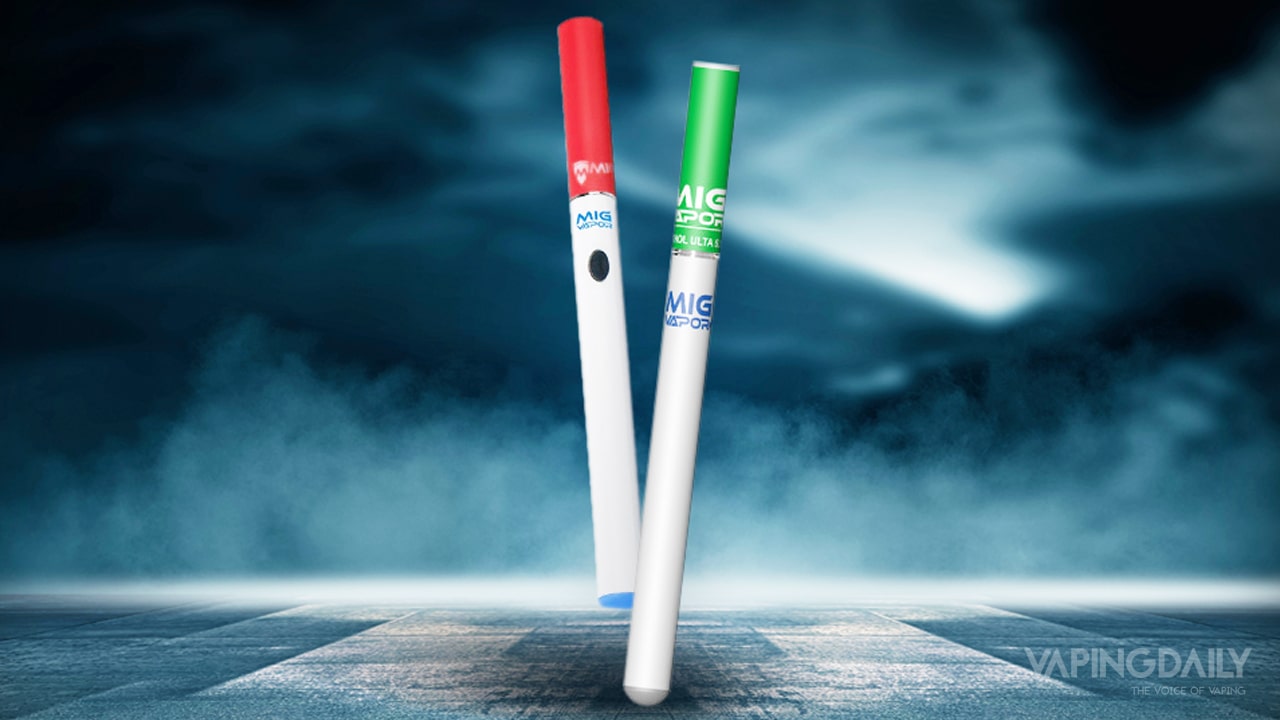 The Express will come with a flavor cartridge attached, and the other will be encased in two plastic covers to keep it free from dust or other contaminants. The batteries can come with or without buttons. Users can choose their preferred style – automatic or manual – when they buy the kit. When a user receives a new kit, they should first charge the battery until it is full.

If these batteries are like the other e-cig batteries in other Mig Vapor bundles, they should have a capacity of 280mAh. Their length is about 4” and change, as they are meant to be portable and somewhat inconspicuous. When the flavor cartridge attaches to the battery, the e cigarette is still compact and pocket-friendly. The cartridges hold about 1ml of e-juice, and there are four flavor options.

The e-juices come from Mig Vapor’s line of hand-crafted e-liquids that feature real tobacco flavor, as they all comprise different takes on tobacco flavor, including Menthol. Inside the cartridges is about 5.0mg of nicotine salt, but users can also buy e-liquids with less nicotine content as they wean themselves off such a high percentage.

What Comes with the Mig Cig Express Kit?

The Mig Vapor Express Kit comes in a simple, easy-to-open blister pack that contains all the e cig parts. Inside each kit, users will find the following:

Both the battery and flavor cartridge are built for daily use, so they hold up pretty well. The entire e cig is mostly plastic, but all the parts feel sturdy and durable. The threads on the battery are finely machined, and there are no problems attaching the cartridge to the battery.

How Long Does the Battery Last?

The battery has a 280mAh capacity, so it could last for about an entire day worth of vaping. The output of the battery is 4.2V, and it is a continuous output, so it does not charge. There is a chip inside the cell that regulates the power, so each draw is the same as the previous one. When the battery is low, users should disconnect the flavor cartridge, screw on the USB charger, and put it into a compatible port. The light on the charger will turn from red to green when it is finished, which is about an hour.

How Well Will My Mig Vapor Express Kit Work?

The Mig Vapor Express Kit promises to deliver a smoking-like experience without all the harmful chemicals of combustion cigarettes. The flavor cartridges contain a high amount of nicotine – 5.0% or 5.0mg of nicotine – that is formulated for smokers so they can gradually reduce their consumption level.

From the first pull, vapers will notice a distinctive throat hit, along with the strong influx of nicotine. The cartridges are good for about as long as there is liquid in the tank, which can be anywhere between 200 to 400 puffs. All the flavors available for the device are tobacco-based, with the four options being:

Getting the device started is easy. Users need first to open the package and remove the packing from each piece, like the rubber protectors around the flavor cartridges opening. Vapers should then unwrap the battery and charger to charge the cell fully. Once the cell is charged, users need to attach the cartridge to the battery, and if they have the automatic versions, they can take a puff, or press the button to vape, if they have manual batteries.

The Vape-Off: Express Kit vs. the Juul vs. the Blu Xpress Kit

The Juul is a portable, e-cigarette with pre-filled pods and a separate battery. The pods contain a patented nicotine salt that has about the same strength as the Express Kit cartridges, 5.0mg, or 5% nicotine. The Juul measures close to 9”, much like the assembled Express Kit e-cigarette. The Juul is air-activated and has no buttons. The Juul and Express also use USB charging.

At the same time, their battery capacities are also very similar – Juul (200mAh), Express (280mAh) – the Express cartridges hold a little more e-juice, as it can keep close to 1ml, while Juul pods only have about 0.7ml.

The Blu Xpress kit is very similar to the Mig Vapor Express kit in that they both feature the same parts – a flavor cartridge, a battery, and a charger – all in the same package. The main difference is that the Mig Vapor Express Kit comes with two pre-filled e-liquid cartridges instead of just one. The Blu Xpress comes only with one flavor cartridge but has a similar shape and functioning as the Mig e-cigs.

The Blu Xpress flavor cartridge has only 2.4% nicotine, so it is not as strong as the Mig cartridges. The Blu Xpress uses USB charging like the Mig Vapor e cigarette, and it can last for around 500 puffs.

The Mig Vapor Express Kit is a convenient, easy-to-use vape that functions well as a starter kit for new vapers. The e cig is easy to put together, it has no buttons, and it features an extra-strong nicotine e-juice that mimics the strength and taste of combustible tobacco.

The battery can last for up to a day, and the cartridges also have a long life, as they can last for anywhere between 200-400 puffs. There are only four available flavors and no refillable cartridge option.

Users can, however, order different strength cartridges, if the 5.0mg pod is too strong. The battery charges quickly, in about an hour, and the vapor production remains consistent throughout. 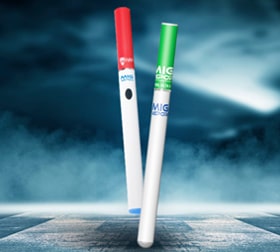