SourceVapes is a premium American vape company that makes one-of-a-kind portable atomizers for concentrates. The new Source 10Cig, as well as the Source 10Cig Pro, are a combination mod/atomizer unit for concentrates. Both pens are portable and feature all-metal exteriors. The Source wax pens support both quartz and ceramic coil/rod atomizers. The unit also supports a flat, all-ceramic disc heating element. The Source 10Cig has three temperature settings and uses one-button controls. 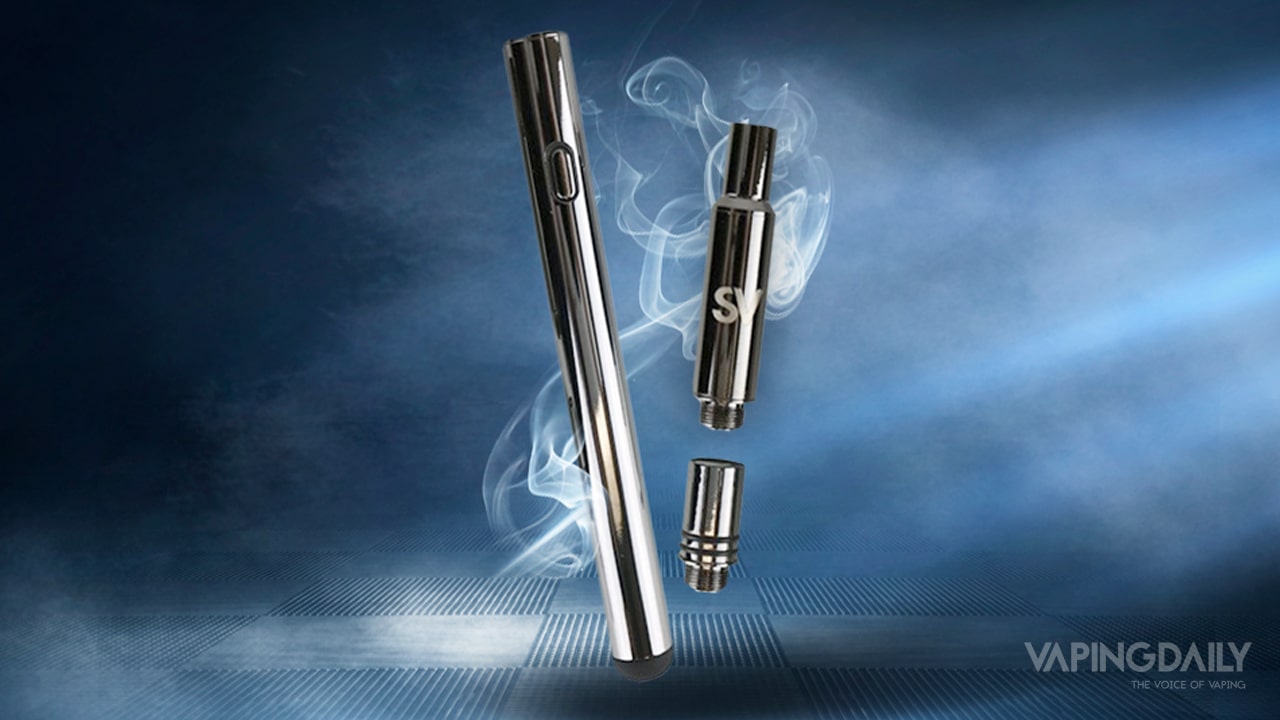 The Source 10Cig comes in a single, flip-open box with a front-facing viewing window. The main parts of the Source come in a fitted foam insert that users pull out from the box. Users need to assemble the device by attaching one of the two atomizers, then the carb cap, and then the mouthpiece. There is also the loading/packing tool, and the Source USB charger.

Getting to Know the Source 10Cig

The Source device has a glossy, all-metal exterior. It uses a special kind of stainless-steel to stay fingerprint-proof. The Source 10Cig comprises four separate pieces. There is the 280mAh Source battery, which is 510-threaded. There is the atomizer section, which is also 510-threaded and can have either quartz or ceramic coils.

This new version of the Source 10Cig also has an air carb cap that fits over the heating oven. This piece allows for more vapor build-up, which means a more natural draw, and more clouds. The final part of the pen is the removable 510 drip tip, also metallic. 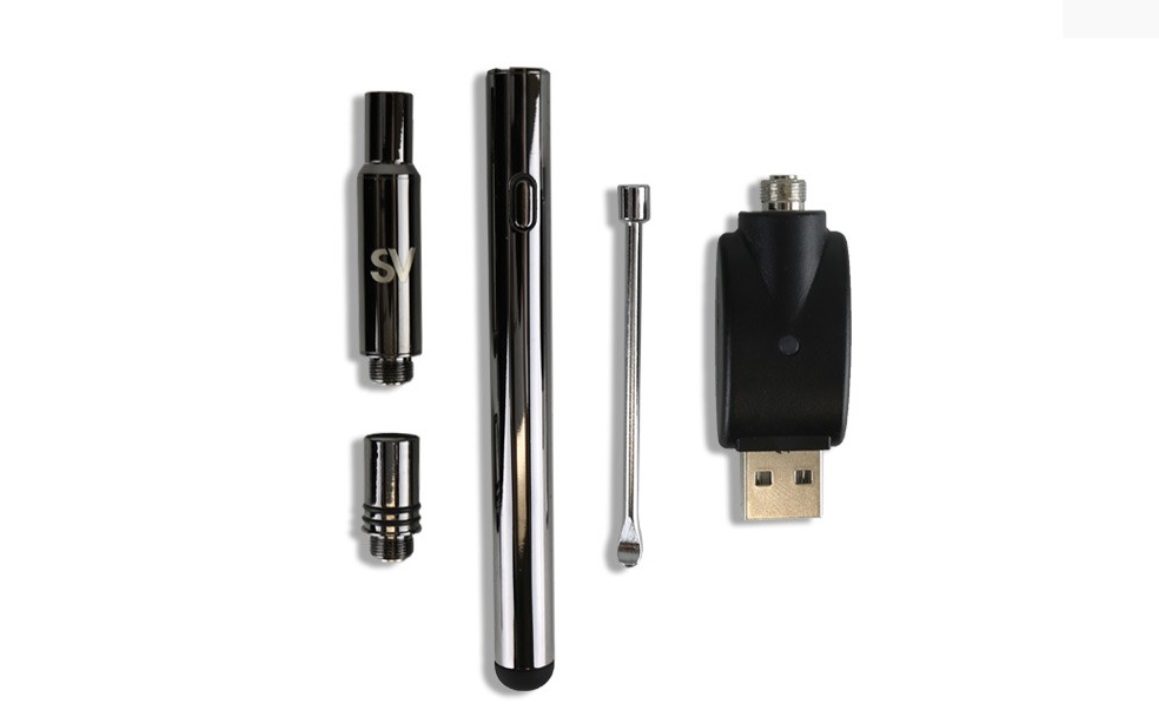 The Source mod has three separate temperature settings and a single operating button. At the very base, the pen has a rounded tip for use with a smartphone or tablet. To recharge the battery, users need to remove the atomizer, screw the battery into the USB charger and plug into a USB port.

There are no magnetic connections on the Source pen. Pieces like the metallic mouthpiece use o-rings to stay in place, as well as the carb cap that fits over the oven. The power/firing button sits flush with the surface of the pen. This button is different from the raised, rubber power switch on the older version of the Source pen.

There are four air inlet holes along the base of the atomizer. They are not adjustable, but they are evenly spaced and well-placed. There are additional two more air holes in the metal cap, so there is ample airflow into the chamber.

The Source 10Cig features straightforward functionality. Assembling the device is super-quick; a user can put the pen together in seconds. They need only attach the atomizer to the battery. Before using the device though, users should charge it with the USB adapter, which is the best way. Charging it to full capacity takes about forty-five minutes.

The carb cap and atomizer already come together. When mounted onto the cell, the carb cap comes off with a swift pull upward to reveal the chamber. The oven is tiny, capable of holding only a small dab of material.

The quartz piece encircles the central coil/rod assembly. The rod measures only 2mm (0.07inches) in length, which is minuscule, but it still takes up the entire oven. There is little space to put any material around the sides of the coil. So users have to place the material directly onto the titanium alloy coil.

Clicking the main switch fives times turns on the cell. Switching between the different power outputs take three clicks. Each setting has a unique color; red is the lowest setting at 3.4V, purple is the medium setting at between 3.4V and 3.7. Blue is the highest setting, at between 3.7V and 4.2V.

Taking the Source 10Cig for a Spin

Vapor production from loading the chamber to inhaling takes only a few seconds. Even on the highest setting, the vapor still takes a while. The coil does need a heat-up time of a few seconds to get hot. The titanium wire does not turn red-hot but when firing a user can feel the outside of the chamber warming up.

The pull of the device is excellent. Since the mouthpiece is right over the chamber, the airflow is loose. The carb cap both gives the vapor more time to travel, so it cools down, and allows it more room to collect, making for huge rips. Each session lasts for only ten or so seconds before the Source battery stops heating the coil. Still, ten seconds is plenty of time to get satisfying draws.

The later sessions at higher temperatures produce the best vapor. The first few pulls are light since the material is still melting. Once it has, and collected under the coil, the hits get bigger.

Depending on the amount of material in the chamber, though it does not take long to vape. And since the oven is so small, getting great hits does not require so much material. The different power settings are not so far apart to make a difference in the vapor quality.

The draw, flavor and cloud size are all more or less the same for each level. The highest setting does go through material quicker, but the rips are incredible. Vapers might not be so thrilled with the lowest setting, as it produces only a thin stream of vapor.

The medium setting does amp up the voltage and give off more cloud. The warm-up time between the settings is minimal. The unit does not struggle to go to higher power output. Changing from one to another is easy, as it only takes three clicks of the switch.

One load of material can last one session, maybe two depending on how much a vaper inhales. Refilling the chamber is easy as easy as filling it, as one needs only take off the carb cap, and load as needed. They need to place the lid back, turn on the Source device, choose a temperature level and start vaping.

The regular Source 10Cig uses a titanium alloy. This alloy is not the same as the all-titanium coil in the Pro atomizers. The rod for all the atomizers is similar. They all feature either ceramic or quartz. 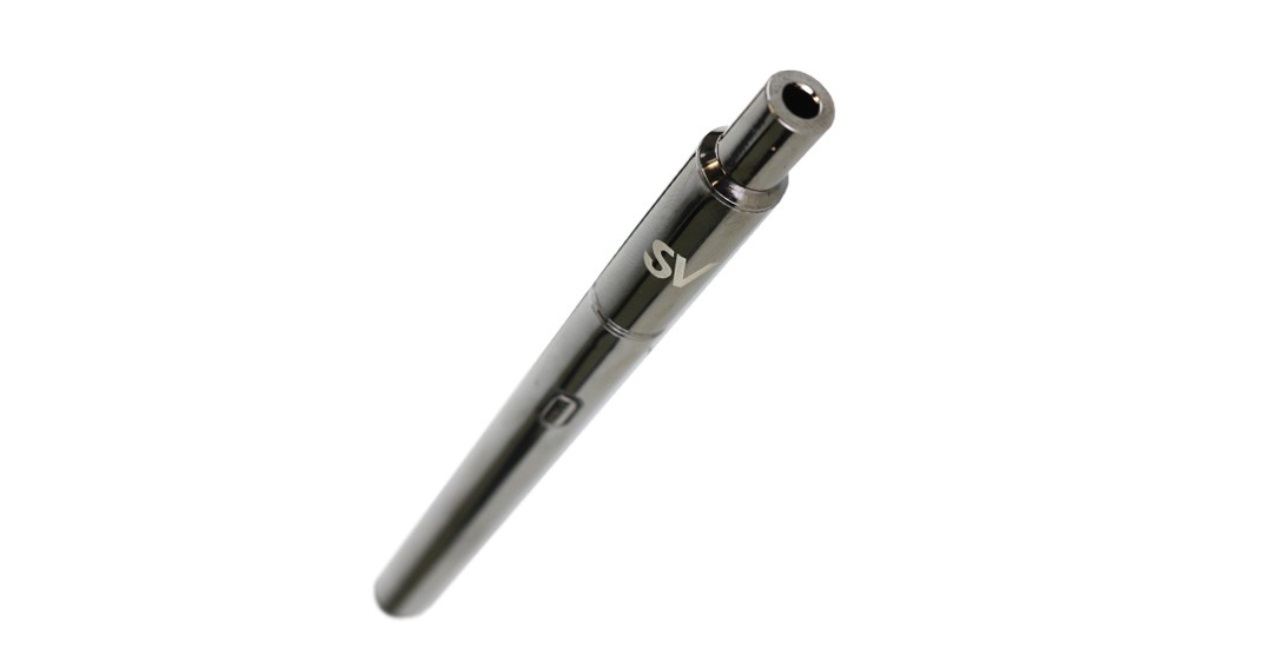 The fourth option does not have a coil/rod assembly at all. The Terra coil has a flat, disc-shaped ceramic base that heats materials. Some believe this style is much cleaner and offers a better vape than the coil/rod style. The solid concentrate does not come in contact with any metal, like with the coil/rod apparatus.

Only the high-grade titanium in both the Source 10Cig and the Pro do not contaminate the flavor profile of the vape. They do come in direct contact with the material, but even still the purity and taste in the concentrate do not change.

Despite their respective names, there is not much difference between the Pro and the original Source 10Cig. As stated above, the quality of the titanium with the Pro is higher, compared to the titanium alloy (meaning it is mixed with other metals) in the v6, the new version of the Source 10Cig.

Apart from that, the functioning and performance of both pens are almost the same. They use the same 510-threaded battery. They both have three preset temperature settings with one-button operation. They both feature the same build materials and are compact. The cells are the same; the only difference is the coil type.

Does it lead to a better vape? The titanium in the Pro atomizers is the same type that SourceVapes uses in their higher-end atomizers. So it offers that kind of vape, in a smaller version. With that said, the regular coil heads also produce quality vapor, and of still great value. Which coil material makes the best vapor is up to vapers to decide.

The SourceVapes Source 10Cig bills itself as an inexpensive way to vape concentrates. The inexpensive part is real. Whether the pen delivers a satisfying vaping experience is another matter.

The Source pen looks great. The all-metal exterior gives off a beautiful, clean aesthetic. The pen assembles very quickly, and it is super-easy to operate. The vape does not come with an instruction manual. There are instructions on the SourceVapes if someone needs to find out how to change the temperatures.

Changing the Source coils is hassle-free, and the addition of an extra coil in the kit is a definite plus. The unit comes ready-to-vape, as the charging time is quick, vapers can start using the pen almost right away.

And as more and more people start vaping not only concentrates but herbs, since studies show it is a little safer than smoking, a pen like the Source10Cig is going to be a common sight.