This job is full of surprises. Just when I thought I’d seen it all, along comes a device like the Dark Knight Spirit from Jomotech that redefines what a wax vaporizer can achieve, in terms of design and power.

The Dark Knight Spirit is truly a unique device that features a battery/glass chamber combination that, while not ideal for on-the-go vaping, would be best suited as a home device (at least, in my opinion). The Spirit features a robust 1800 mAh battery with a round ceramic disc heating system as its atomizer.

The battery and glass piece come separately, with a nozzle attached at the top for easier vape pulling. Yes, the Dark Knight Spirit does look like a bong on steroids, and it even makes use of water as a cooling system for the vapor, so you hear that distinct water bubbling familiar to so many every time you vape.

This Is The Kit 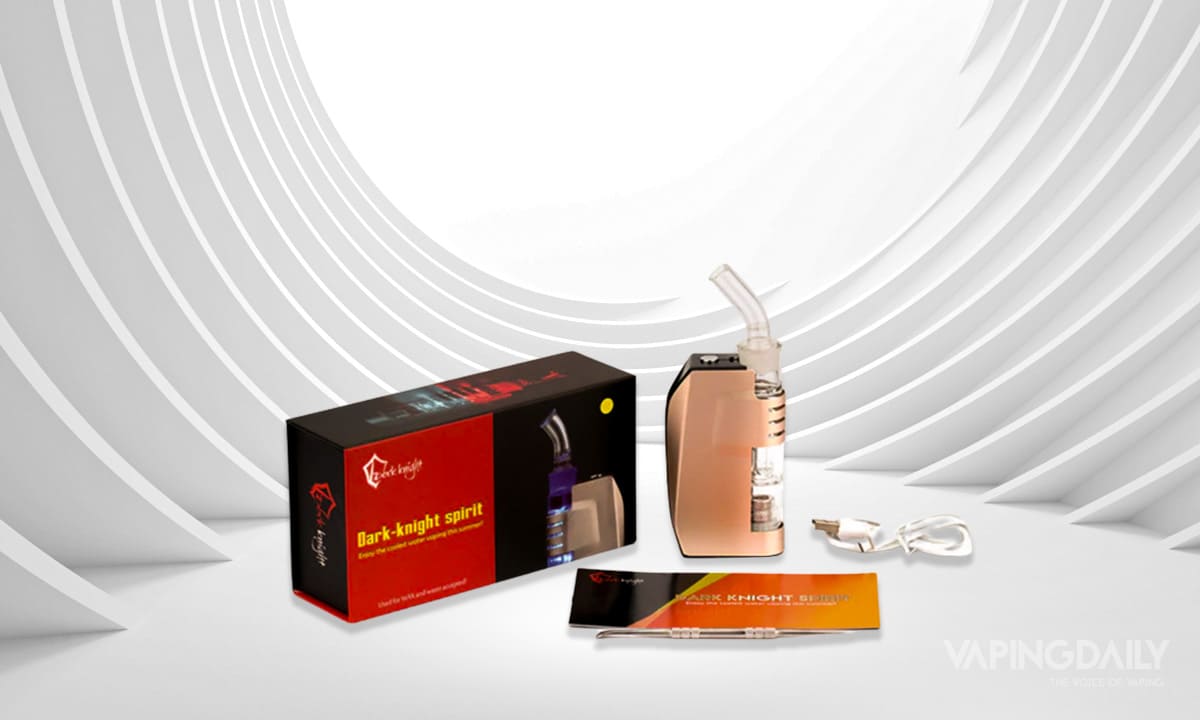 The Dark Knight Spirit comes in packaging that incites very little fanfare. It might as well be a hairdryer. What you get inside includes:

The battery and the glass attachment come already together, but they separate easily, as does the top glass nozzle.

The Dark Knight Spirit is a strange-looking device, yet exciting at the same time. It obviously recalls your favorite bong or another water pipe, and I think that’s what the designers were aiming for so that there was something familiar about the device.

The glass attachment, which is sturdy enough but not entirely indestructible, comes out simply by pulling it up and out of its holder. The atomizer is at the base of the glass tube but attaches separately. 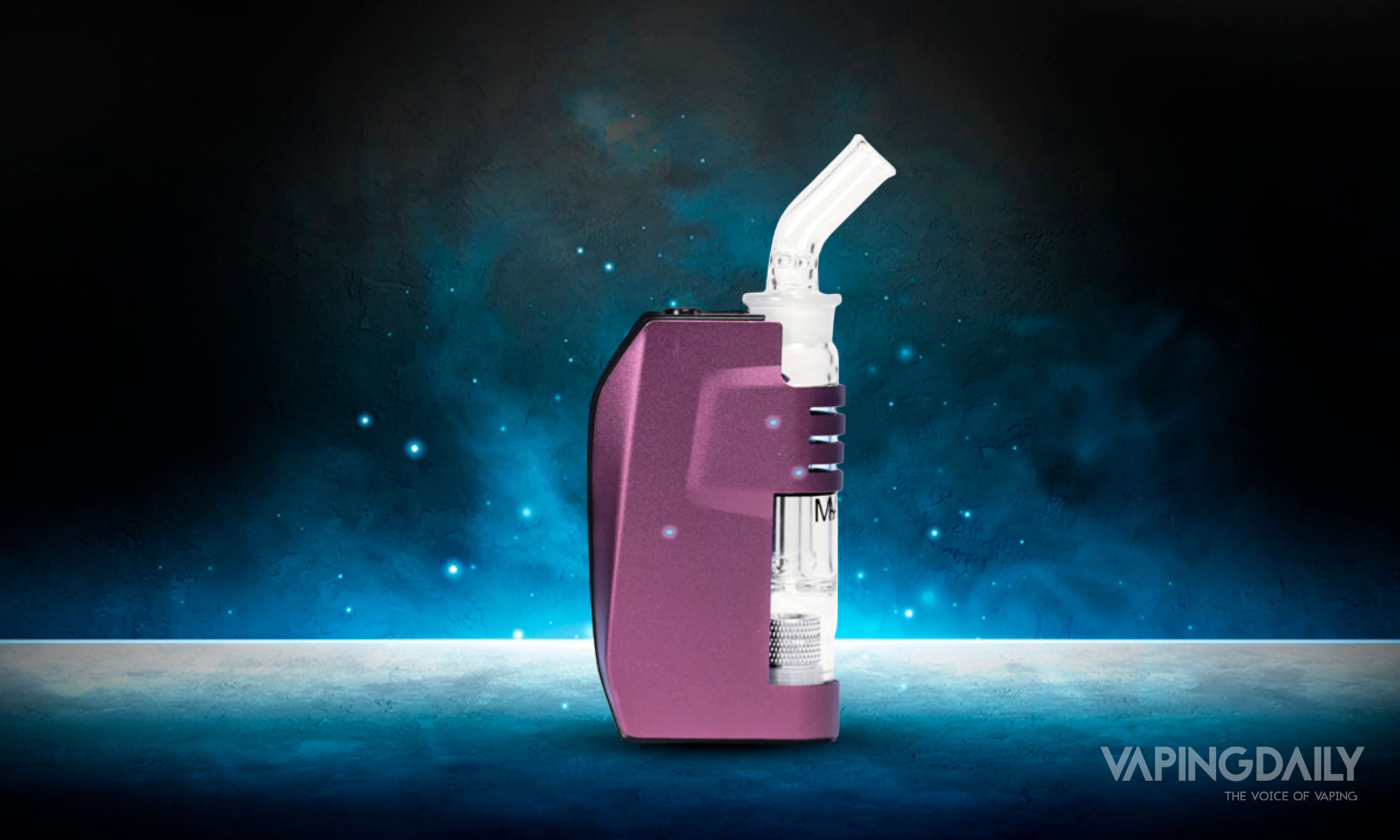 The coils are sub ohm and range in resistance from 0.4 ohms to 1.5 ohms so there are few different kind of hits you can get from the Spirit. The glass tube needs to be filled with water so that it can act as a cooling component to make the vapor more palatable.

This is a one-button device that features no other controllable or adjustable features. And like I said, given its ungainly appearance and shape, the unit does not necessarily lend itself to portability or discreteness, so it’s best used in a group setting, preferably at someone’s home.

How the Dark Knight Spirit Works

The Dark Knight Spirit is a wax vaporizer that can perform at both sub ohm and above ohms levels. When you have the battery already charged, remove the glass nozzle from the top part of the glass tube and fill the tube with water to its max capacity.

When filling the atomizer tank, be sure not to overload the tank, since it might bubble over, due to the round, evenly-heating ceramic coil. Use the scooping tool if necessary to spread about a grain-sized amount of dab into the ceramic chamber.

Reattach the atomizer, slip the tube filled with water back into the port and turn the device on with five clicks of the trigger mechanism located at the top of the battery. The tube sits in front of five LED indicator lights that flash on and off to show when the device is ready to be used.

There’s not much control on the Dark Knight Spirit, neither an adjustable temperature or wattage control. The lack of temperature settings don’t matter much since the donut ceramic disc heating element ensures a proper and even burn of your concentrate.

The cloud production was mediocre on the Dark Knight Spirit, and the vapor itself was noticeably cool, compared to the lip burning heat that most wax vaporizers feature in their mods. I liked hearing the water bubble as I took some lengthy draws.

The direct lung hit was substantial, and the flavor was not diminished, although I didn’t feel as many different notes as I expected I would. All in all, the pull was almost effortless, but the cloud production was not as great as I would have liked it to be with a sub ohm device.

The flavor clouds, however, were another story. There was a consistent burn, and I felt like the dab I put in was roasted completely.

How The Vape Compares

When stacked to another water bubbler device that also vapes waxes, like the Source Nail Vaporizer. But I realized that this was practically no contest. The Source Nail vaporizer is a top-of-the-line device with a myriad of attachments and a more consistent flavor delivery system. It is also adaptable to other sorts of material, so it wins there too.

The Dark Knight Spirit, despite its interesting design interface, doesn’t offer much more in terms of a standard wax vape. There are no temperature or airflow adjustments that can be made. And so despite the Spirit’s promise of being chock-full of interesting gadgets and toys (like that other Dark Knight) it actually kind of stays within the lines.

The water bubbler/slash glass vapor chamber comes already inside the port, so all you have to do is take it out, fill it with water, fill up the tank and set it back in place and you are ready to go.

The wax melted nicely and evenly in the chamber and thanks to the round donut ceramic coil, all the flavor trapped inside my dab was released, happily into my mouth. And since it was an even, all-around vape, I captured all the right essences and notes.

The ceramic coil heated up as soon as I fired the device, which was probably due to the 1500mAh battery and the sustained 18 and 30-watt range of power output. But with one touch, my dab started to bubble up like a witches’ brew.

The device didn’t feature any added control features, which was a disappointment given the power of the device and room on the battery itself for extra buttons and features.

Not to be a classist or anything, but the Dark Knight Spirit, while certainly carrying an evocative name, does not reflect any style elements from either the eponymous comic book hero or his storied world. The mod looks cheap, and it only comes in two colors, gold, and wine.

The mod itself had plenty of room and space to add some pleasing aesthetic features, but Jomotech failed to do anything with that added button room.

The Dark Knight Spirit didn’t do anything for me. I was unimpressed by almost every aspect of the mod, from its lackluster design to its underwhelming performance in the cloud-making department.

There are a lot of better, more interesting looking devices out there right now, especially for wax and concentrates. So, while the Dark Knight Spirit does feature that donut-shaped ceramic coil that everyone is crazy about right now, I still don’t think it is much of a value, given its retail price of over $90.