Although it bills itself as a “down-low” vape pen, the Clout DL1 still has a lot of features that make it stand out. The stainless steel components (mainly the mouthpiece, firing mechanism and the tip of the battery) are hard not to notice, but that doesn’t detract from the device whatsoever. I think those stainless steel components (more like chrome fittings) make for an interesting design feature, for me, anyway. 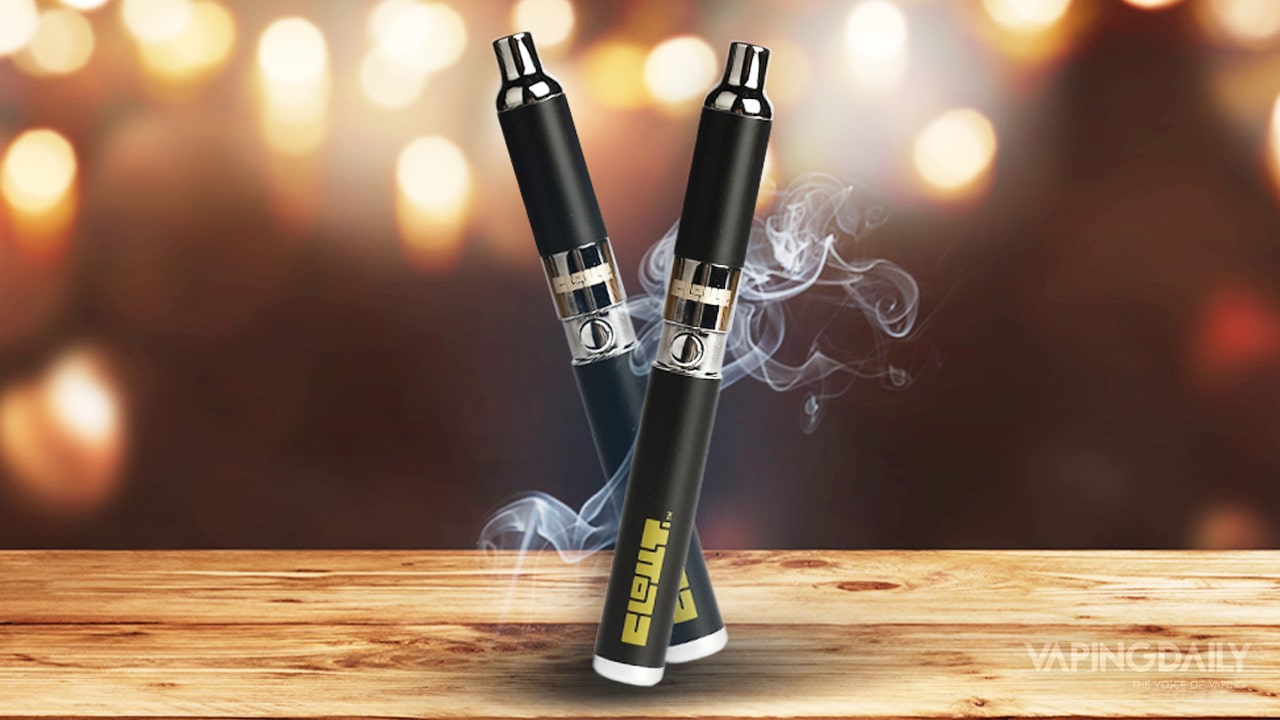 With that said, the DL1 does hide some complication behind its facade of a “simple” device. There are over five different parts to the DL1, among them are:

The DL1 functions primarily as a wax or concentrate pen, with a dual quartz coil atomizer that sits atop a lithium-ion battery that has a capacity of 650mAh. The DL1 can be completely disassembled, which is great not only for cleaning and maintenance but lets you see how the device works.

What Comes With Clout DL1

The Down Low (I prefer calling it that to the DL1) comes ready to use but in separate pieces. What you’ll find in the box:

Recently, I’ve been reviewing a lot of starter kits and AIO’s that don’t require a lot of assembly or vaporizer knowledge, so it was refreshing to see a device that you had to assemble and discover how to use (even though there is a digital instruction manual on the Clout website).

Out of the Box

Even though I made a point of how delighted I was to see a vape pen that you had to take apart and assemble, the Down Low (or DL1) did come already assembled (nervous giggle). The battery and atomizer come attached, and only the extra coil and charger come separately.

The battery itself is all black, and the rest of the device has these semi chrome fittings that I thought made a very bold statement. Put all together, the Down Low is not too intimidating in size, but it is not a slip-it-in-your-pocket device.

I felt it was still a little on the heavy-and-noticeable size. But luckily, the battery comes with standard 510 threading at its mouth so you could slap on something bigger or smaller concerning a tank or atomizer, given your tastes.

There is a single button to fire and heat the device. And the coil components are the most exciting part of the Down Low.

The coils are made of quartz, and the cup component is ceramic. Both of these materials are great at capturing heat, so it was a good choice to use these materials.

The battery took just over two hours to charge. And only from charging the Down Low, I arrive at my first con of the Down Low. The unfortunate part about the Down Low was the charging aspect.

Charging required taking off the atomizer from the battery and attaching the USB cable to the same port and charging it that way. There is no separate USB port like with most other devices, so there is no pass-thru vaping on the Down Low One.

But, moving on from the charging aspect, I took the handy dab tool included in the Down Low package and filled up the atomizer with a little less than a quarter of the full tank capacity (be careful not to shiv the coils though).

I was glad I didn’t fill up the tank to capacity because with the small amount of wax I put inside, I got huge clouds and a mouthful of vapor. I was caught off guard, a little.

There are no temperature or wattage controls, so there’s not much to change or modify. Everything is up to you basically, in terms of how deep and how hard you pull.

I found that holding the trigger for a few seconds allowed for enough vapor to build up that I didn’t need to pull extra hard to get some good cloud. The airflow of the device was extremely good and there wasn’t much need to pull so much.

When it comes to the waxes and concentrates, I’ve found that I much prefer the sleeker models, than some of the glass globe wax or dab pens out there (like Clout’s Oozi model). Mig Vapor also features a wax pen of comparable size, power, and price the Keymaker.

Except the Keymaker has a lot more features, different coil options and is much smaller in size than the DL1. The Keymaker also has a temperature control feature that can help you control how much or how little you want to vape.

Even though I liked the name “Down Low One” I wasn’t too convinced that it was so discrete. But again, I wasn’t disappointed; I liked the way the DL1 looked, thanks in part to the steel fittings that also resembled the chrome finishings on a Harley Davidson.

The black body and chrome inlay were especially attractive. I also liked the Clout logo with its block/bubble lettering, written on the bottom of the battery.

The ceramic cup and quartz coils are great to vaporize your wax, but they also make the device a little too hot to hold sometimes. I don’t think the Down Low One has a cut-off time either, so forgetting to turn off the device means real trouble.

The Down Low One is a powerful device. The 650mAh battery pairs nicely with the atomizer components (quartz coil, ceramic chamber) that heat up quickly and effectively to dissolve the wax and put out some full-bodied vapor.

As mentioned above, I was a little disappointed with the assembly and disassembly required to charge the DL1. It wasn’t something I’m used to, but then again, it wasn’t a complete deal-killer.

For $50, the Down Low One is not a bad choice for a wax vaporizer. Its features are few, but the reliability and power behind the device ensure consistency and quality, so I was happy to shell over $50 for a device that I can trust.

Sure, it was great to get back to a vape pen that had a lot of pieces that required assembly. But, taking apart the Down Low One to clean it (the coil cap needed some clean-up after a few days) reminded how annoying it is to have pieces escape on you, which did happen with the DL1.

I think the DL1 skirts the line between power, stealth, and ease of use. It’s not the most complicated wax mod out there, and that was to its advantage. The DL1 delivers in the power department, that’s for sure.

The device has a simple interface, but Clout has recently introduced a DL1 + that features a variable voltage battery, but, if you ask me, it’s not really worth the extra money. The DL1 powers up nicely to deliver great, thick clouds of vapor.