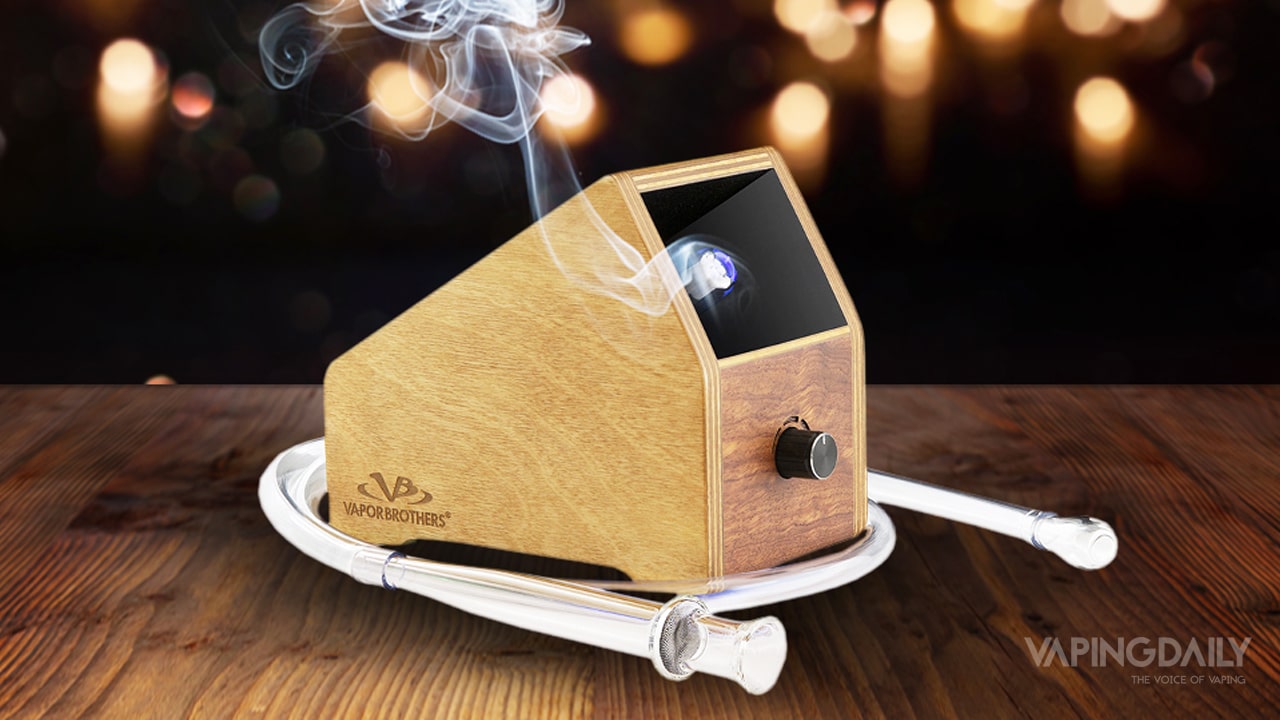 The Vapor Brothers Vaporizer is a simple device. The body is made of wood and is shaped like one of those knife holders for the kitchen. It has a knob at the front that acts both as the on/off switch and temperature control (like in the temperature control mods). An opening above the knob is where the whip is installed, and the colors available include natural, coffee, and green. There’s not much to be said about the design save that it is simple yet functional.

Every purchase of the Vapor Brothers Vaporizer will also include one EX change whip and tubing, one hand piece, one mouthpiece, one Vapor Brother organic blend sample, one bamboo pick, one new clear AromaBulb, and one essential oil sample. 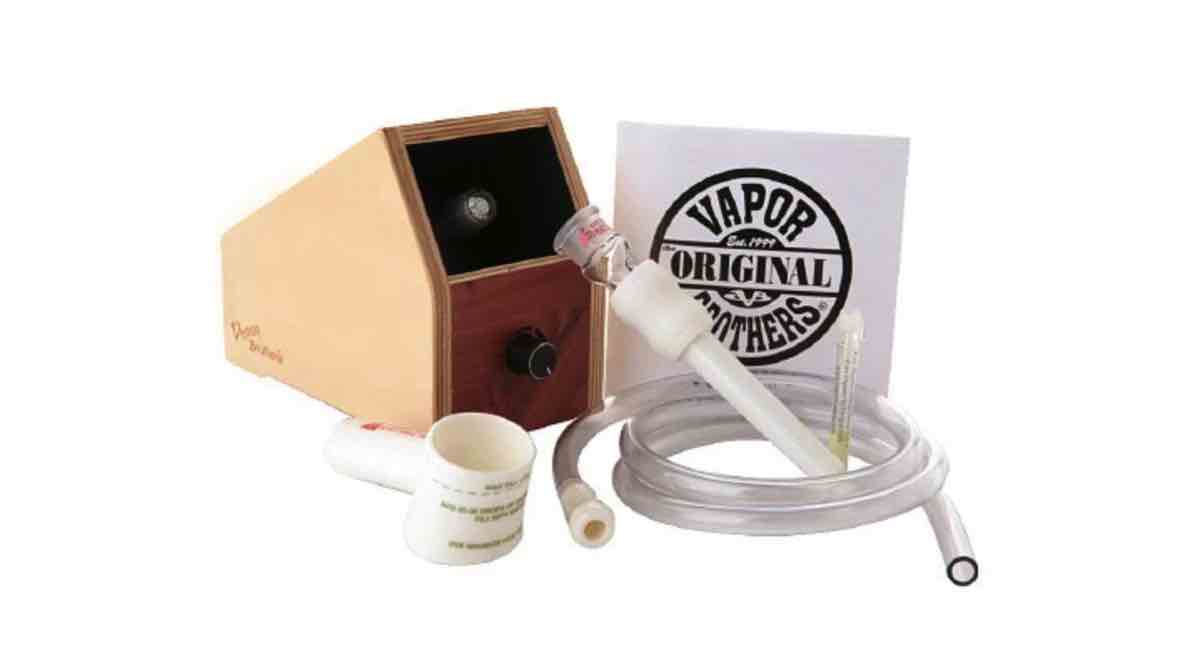 Operating the device is very easy and intuitive. To turn the unit on, users just turn the knob to the 12:00 position and wait for about five minutes. While waiting, one can prepare their herbs by grinding (using one of our best grinders) them finely then loading them into the filling chamber. Be sure to fill the chamber about ⅓ or ¼ full to let air circulate within. Users then fit the filling chamber into the heating coil, taking care to not let anything fall into the coil directly. 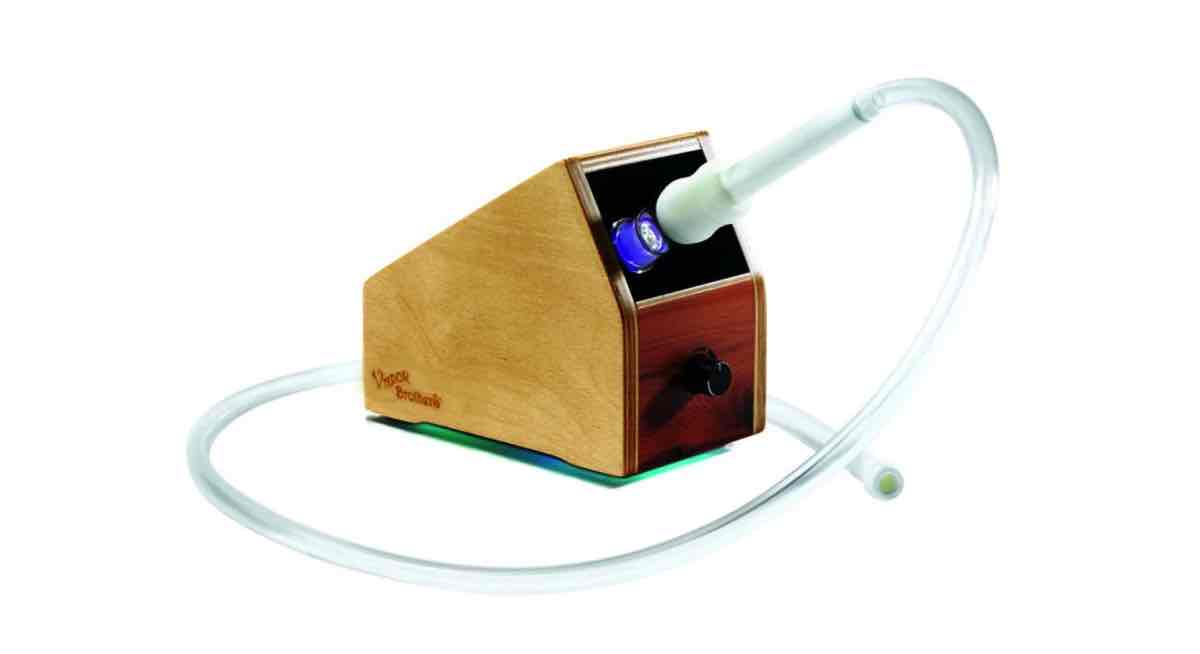 Once set, users can start vaping. Turning the dial adjusts the heat, though many users suggest leaving it at the 12:00 or 1:00 position. Each filling will usually give about five to seven inhales, depending how long one takes a puff. Once finished, make sure to unplug the device to avoid overheating.

Despite its simplicity in design and use, the Vapor Brothers Vaporizer produces vapor like a champ. Using its trademarked Natural Mineral Heater, which is made from porcelanite – a dense glassy ceramic – the device can create clean and tasty vapor. The glass and food-grade tubing of the whip and mouthpiece do not taint the taste in any way as well.

The unit is also very silent since it does not have a fan to force air into the mouthpiece. This also means users have to inhale to draw vapor, however. The whip itself is about four feet long, giving users ample length to pass the mouthpiece around when used in large groups without pulling on the device. Cleaning the unit is also straightforward, adding to its overall value. 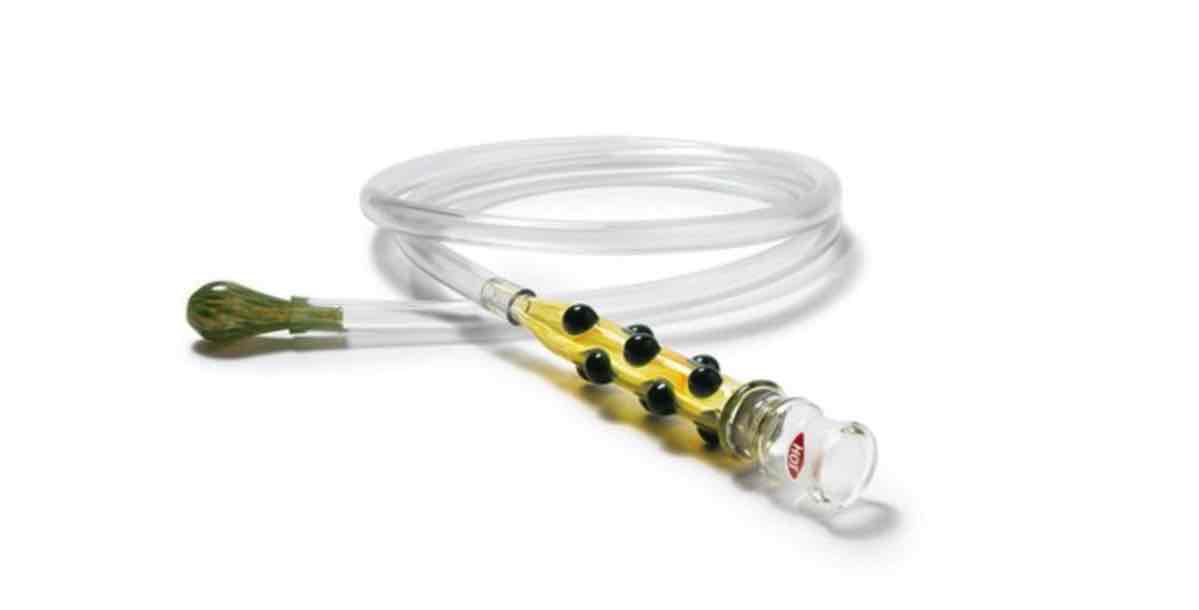 Overall, the device performs as well as other, higher priced vaporizers on the market. However, one loses the ability to fine-tune temperature settings and adjust fan speed since the Vapor Brothers Vaporizer is a no-frills unit. At its price point, this is not an issue in any way.

Designed primarily for home use, the Vapor Brothers Vaporizer is a plug-in device and users do not have to worry about battery life for extended vape sessions. 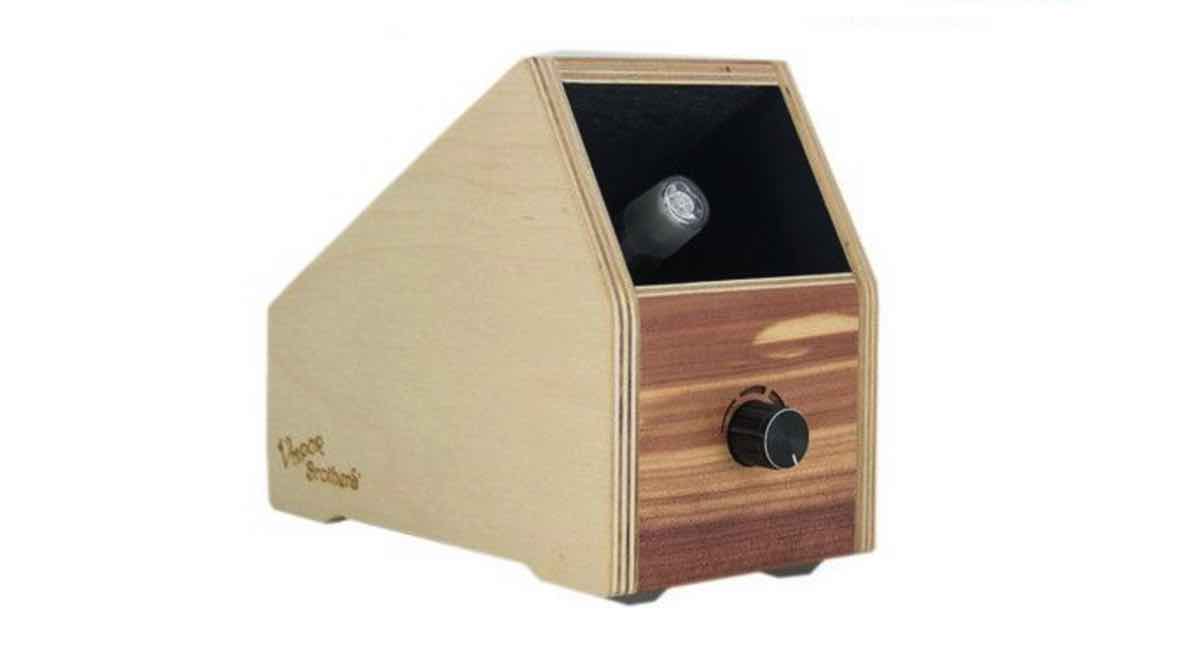 The heating element consists of a ceramic heating coil that is encased in glass. This is a nice touch, making the device easier to clean since the coil rarely gets dirty, if at all. The knob on the front controls the coil’s temperature though there is no screen to indicate the exact temperature. One downside of the heating coil is that it takes about five minutes to heat up. Other devices average about three minutes, with some capable of heating up in less than one. However, for less than $200, this is a small price to pay to enjoy high-quality vapor on par with more expensive vaporizers.

The device is made of wood, and it is crafted well. Inside, a ceramic heating coil is encased in glass. While the body itself is solid, because of the glass parts, care should be taken when using the device. The whip is composed of two glass pieces and food grade tubing to ensure clean tasting vapor. The glass mouthpiece has a small hole to draw from while the other end is the filling chamber that is fitted into the ceramic coil. While the device will not do well with rough transport and handling, it is built well and will last users a long time if proper care is given.

It is far from perfect, but the Vapor Brothers Vaporizer has enough to make it one of the best vaporizers in its price range. The easy to use interface makes it perfect for beginners, while the excellent performance will attract many advanced vapers.

It takes a while to heat up, and the device can be a bit fragile due to the glass parts. But users will not mind any of these when they consider how well it performs for the price. Vaporizers that can give vapor that’s as clean, pure, and tasty as this one can only be found at a higher price point.

Users who are looking for a high-performance vaporizer that won’t break the bank should check out the Vapor Brothers Vaporizer. It does not look much, but with the way it performs, one would not care.

While it is not the best-looking device on the market, the Vapor Brothers Vaporizer is still a solid performer and is one of the best bang-for-buck units out there. Though it is not as portable as most box mods, still it produces excellent vapor, is simple to use, and can be a great first device for beginners.