The Vapir Rise is a forced-air desktop vaporizer that uses a built-in fan to blow out vapor. The device can vape dry herbs and comes with a special wax container to vape concentrates. The unit has a unique, funnel-shaped, top-fill material chamber, and can be used in the “whip-style” – with a silicon tube attached to the chamber – to inhale the vapor. It also comes with an inflatable balloon that can be placed over the chamber to capture vapor. 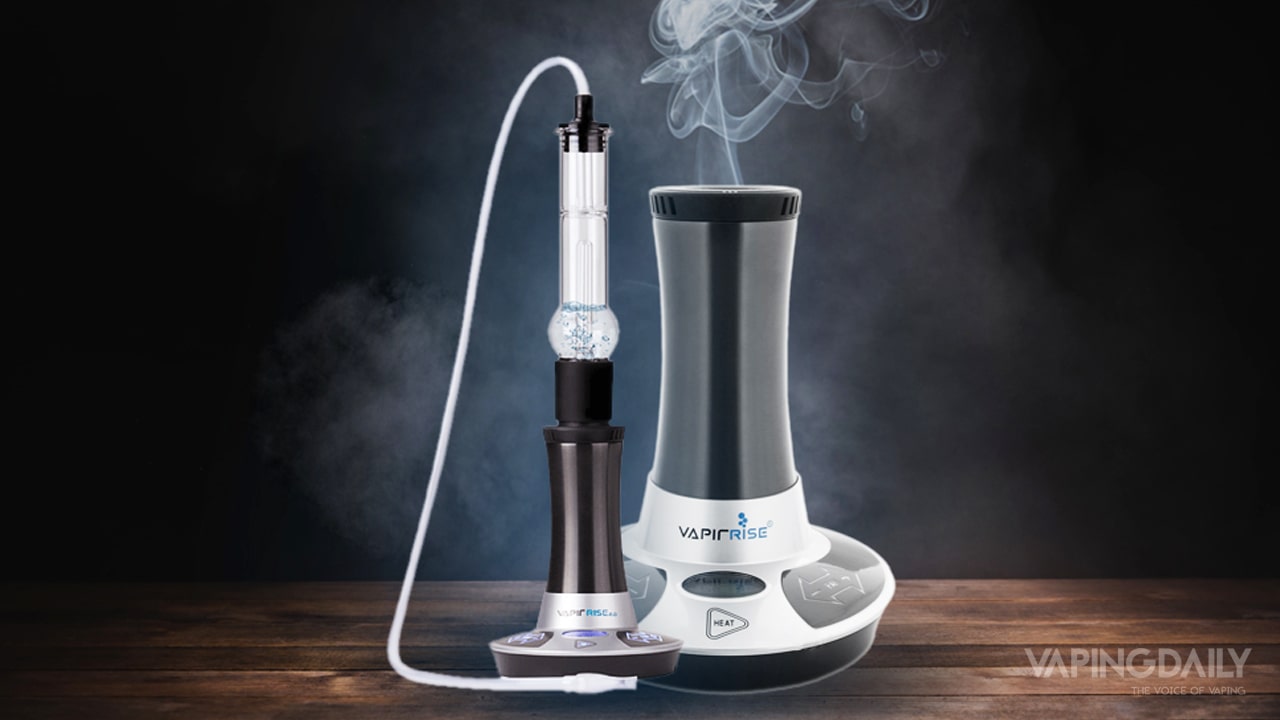 The Vapir Rise is a very straightforward device, even though it looks complicated. A medium-height, cylindrical, tube rises from the flat base of the device, where the operating interface, as well as the internal fan, is located.

The tube is top-loaded, so each stainless steel heating canister for either dry herbs and waxes gets merely inserted into its tube’s opening. The user interface is likewise intuitively simple, with oversized controls to control the fan’s speed, as well as the temperature.

There is no battery to work with or charge, as it is a desktop vaporizer, but there is removable power cord directly behind the device’s base. The Rise employs a HEPA filter that can be removed from the bottom of the device.

The only confusing thing about using the Rise might be figuring out what all the attachments are used for and what they do. Here is a list of everything that comes included in the kit:

A quick read of the user manual might be in order before using the device. Once everything is clear, using the device becomes remarkably simple. There is an oversized power switch on the side of the base.[/vc_column_text]

Turn the device on, and set the preferred temperature using the also-oversized, and visible touchpad, up/down arrow. After setting the temperature, press the centrally-placed “Heat” button to begin the heating process.

The heat-up time takes up to one minute. While the device is heating, take the time to fill either the loose-leaf or wax canister with material.

When the device is ready, attach either the single-user, whip adapter or the inflation balloon attachment on top of the canister and place into the chimney opening.

Set the fan speed (the fan must be on for the heating element to continue working). With the fan on, vapor will continually be propulsed out of the chimney.

Vaping with the Vapir Rise

It is not exaggerating to call the Vapir Rise a vaping machine; it quite literally is, a vaping machine. With that said, all the tech and moving parts involved in its functioning make it an excellent vaping device.

The fan pushes out every particle of vapor out through the silicon tube or into the inflatable balloon. There is no effort needed on the part of the user. One minor design flaw is the interconnectedness of the fan and the heating element.
[/vc_column_text]

When not being inhaled, vapor continues pouring out of either the tube or into the balloon. Turning off the fan to prevent the loss of this sidestream vapor also turns off the heating element, which then means it has to be turned on again to begin producing vapor.

This slight inconvenience in no way overshadows the Vapir Rise’s exceptional performance; as stated, it is only a minor design flaw.

Being a desktop vaporizer, the machine is always plugged in, so the power flow is never-ending. The Rise employs a ceramic heating element, which pushed out only the purest possible vapor clouds.

The Vapir Rise vs. the AeroMed Vaporizer vs. the Herbalizer

The AeroMed vaporizer may not look like much, but it is by far, one of the most high-quality, dry-herb vaporizers out on the market right now.

The AeroMed does not have any fans and has a total of three buttons, (a power button, and two up/down buttons). For a simple device, the AeroMed is incredibly expensive for the entire kit.

Specifications of the Vapir Rise Vaporizer

For a fan-powered, desktop vaporizer, the Vapir Rise is an excellent investment. Even with the fan in constant operation, the device is whisper-quiet.

The countless number of accessories and attachments make it a very versatile vaporizer that can be vaped by a single user or even hookah-style, with over four separate tubes.

There is even a plastic “grabber” to help change the canisters in between sessions, whenever the cartridge gets too hot. Everything needed to get vaping comes included in the kit. The user interface is big and backlit, making for spectacularly easy functioning.