The Four Vaporizer Review: Give Me a High-Four

The Four is a brand new dry herb vaporizer from Mig Vapor. It features one-button control and five distinct preset temperatures. The Four has an all-aluminum exterior that hides a powerful 2500mAh internal battery. The battery sits beneath the wide, 14mm (0.5”) ceramic heating chamber. 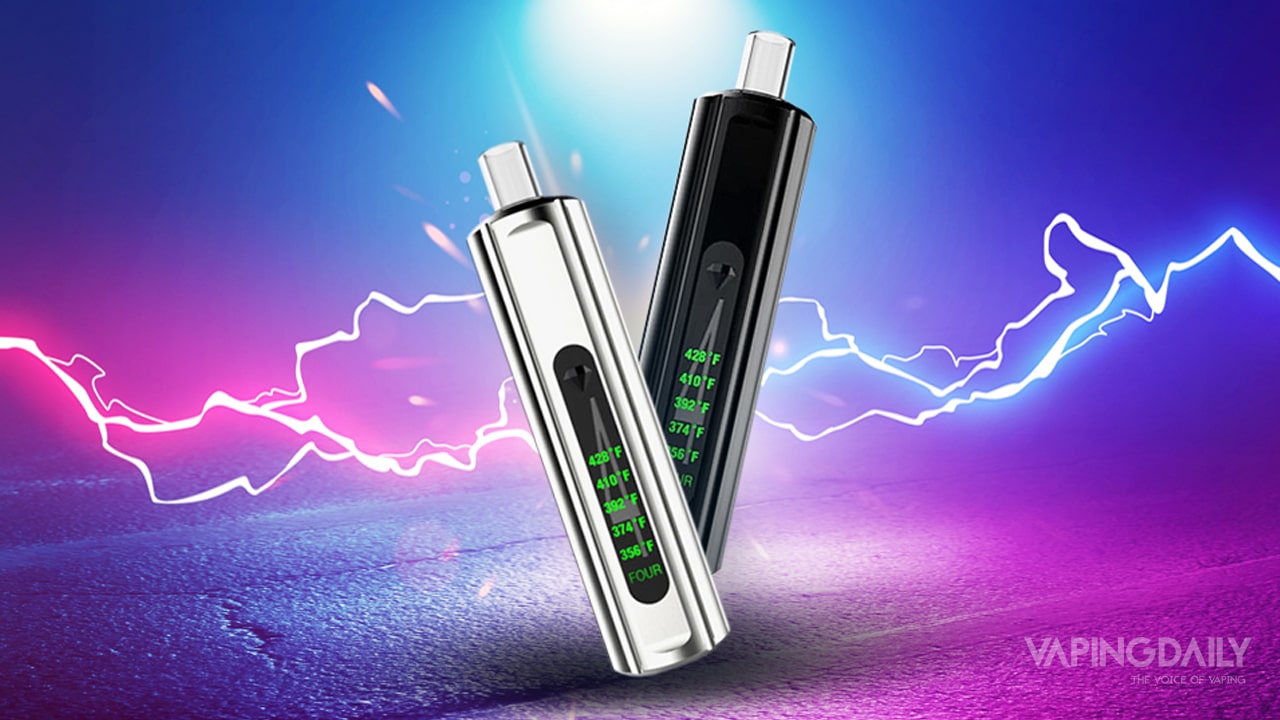 Users can load their material into the chamber via a top-fill method. The chamber is all-ceramic and uses a glass mouthpiece to create a pure vapor path. The vapor path does not run through any electronics, so the vapor is 100% clean. Along the front of the device are five LED readouts for users to select their ideal temperature.

A Closer Look at the Four Vaporizer

The Mig Vapor Four vaporizer has a long, cylindrical shape with a short glass spout at the top. The glass spout is the mouthpiece through which vapor travels out from the chamber. Users can remove the top cap and mouthpiece to reveal the chamber underneath so they can load their material. 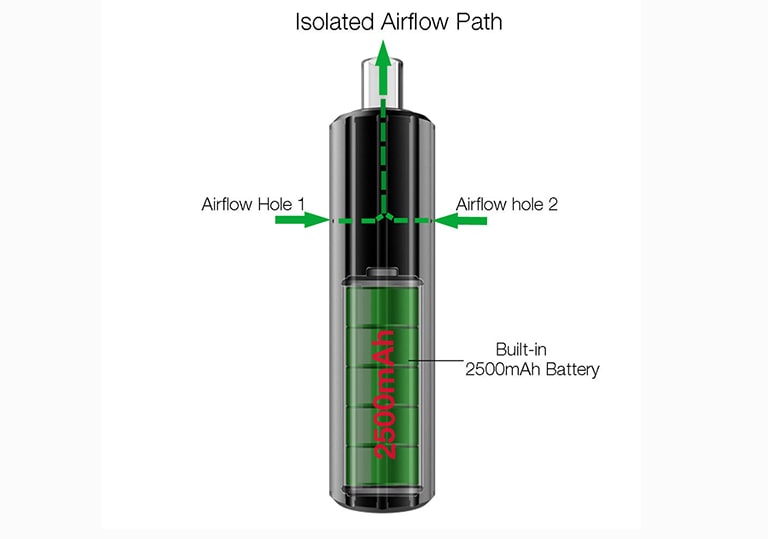 The Four has several ridges that run along the length of the device to allow for a better grip. There is a central panel that displays the five temperature settings for the device.

At the very top of this panel is the device’s single power/firing button. At two points on the panel, there is a numerical “4” imprinted on the back panel with another “four” spelled out at the very bottom of the panel. The exterior of the device is “aircraft aluminum” giving the Four a lightweight but durable outer shell.

There are two air intake holes on either side of the chamber exterior. These are the only two air holes on the device’s chassis. On the very bottom of the unit, users will find the micro USB port. Users can charge the Four’s internal 2500mAh polymer battery using the port, with charging time taking between one and one and a half hours.

The Mig Vapor Four comes with the standard tools included in all dry herb vaporizer kits. Vapers will find everything they need to clean and maintain the Four, as well as a USB charging cable to charge the battery. 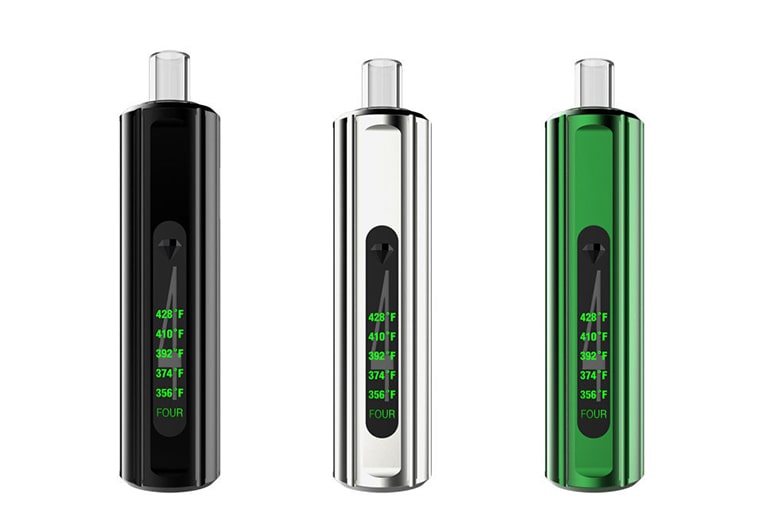 Here is what else they will find:

Up Close with the Mig Vapor Four

The Mig Vapor Four comes in three color options (agate black, brit green, silver), each of them well-suited to the device’s exterior design. The Mig Vapor Four has a simple, straightforward design that users will find easy to handle. The all-aluminum hard-body of the exterior has an excellent feel to it, neither too hard but light enough to be portable and durable. 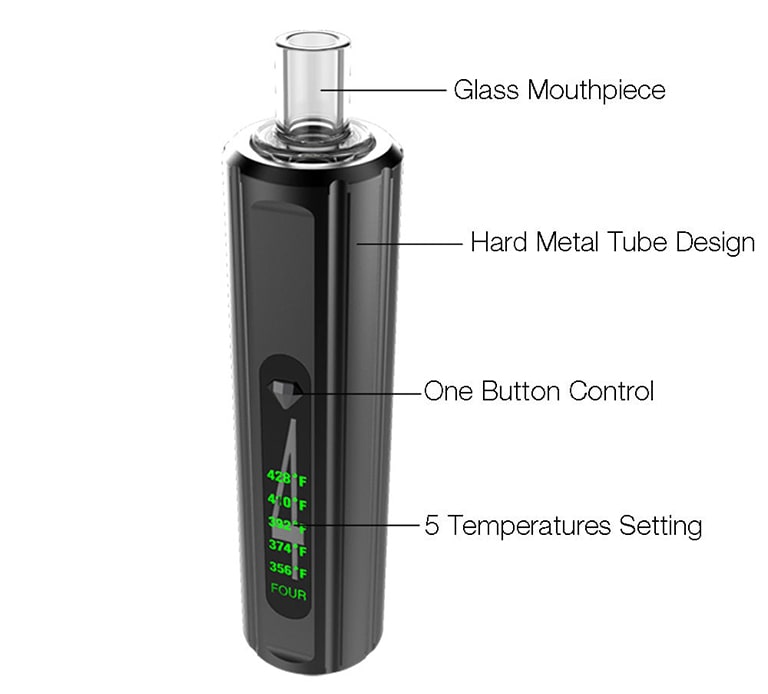 The top cap pops off easily to reveal the deep ceramic chamber that uses convection heating to heat its materials. There is a single, diamond-shaped firing button that also controls the heating levels. And the USB charging port is easy to find so that vapers can recharge the battery.

The Mig Vapor Four has an internal 2500mAh polymer battery that can provide close to two hours of continuous use.

The battery life, however, also depends on the heating levels. Users who vape at the higher temperatures could expect to have a lower vaping time, even though vapor quality might be better. 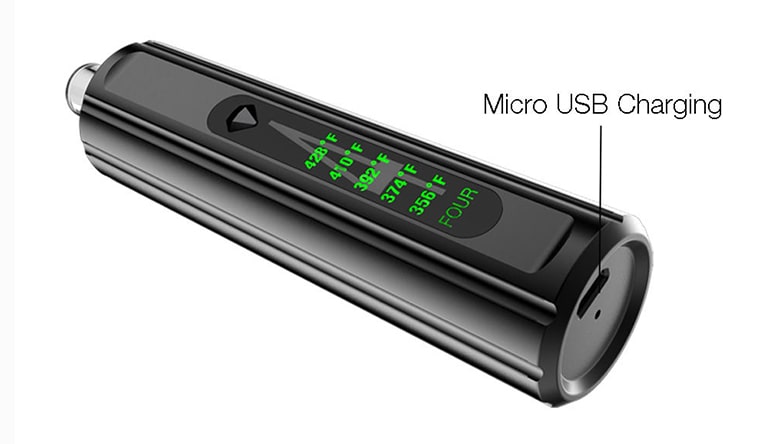 Users who vape at the lower or mid-range temperatures could perhaps get longer battery life, although the vapor quality might be affected. The internal battery might also be a put-off for some vapers who prefer to have removable batteries, which then extends the operating life of the vape.

Removable batteries on dry herb vaporizers are rare, with a few notable exceptions, like the Magic Box or the DaVinci IQ.

Getting Material Into the Chamber

The Mig Vapor Four has a broad and deep material chamber. The depth of the crucible is evident to the naked eye; looking down, it is like looking down a deep well. According to Mig Vapor, the oven can hold about one gram of material, which is a lot. Smart vapers will know that grinding and filling a single chamber with an entire gram of dry herb is a bit of overkill. 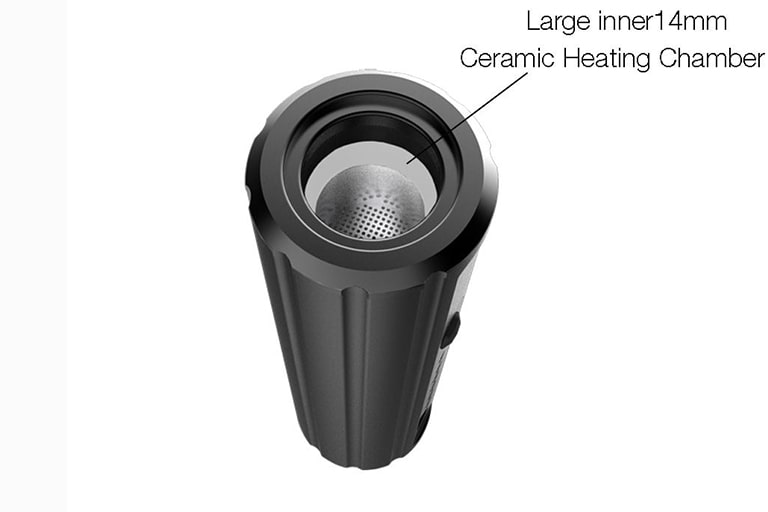 Getting the Mig Vapor Four is very straightforward. Users need only press the power button a few times (5) to activate the device.

Once the battery is enabled, users can again use the button to select their preferred heating level. The levels light up when they are chosen, displaying to users their selected temperature.

Users can fill the chamber half-way or leave at least a few millimeters of space between the material and the top cap for optimal vapor production.

The heat-up time for the Mig Vapor Four is on par with industry standards, which are anywhere between twenty to forty seconds. After the device reaches its selected temperature, users can begin taking draws.

The glass mouthpiece remains cool to the touch, even at the highest temperature. It also provides a nice air path for the vapor, which only adds to the vapor’s quality. As noted before, the two air intake holes offer a steady stream of air to pass through the chamber. The various temperature levels also provide a welcome touch of versatility.

The Mig Vapor Khan is a hand-held, portable vaporizer with precision temperature control. Unlike the Mig Vapor Four, the Khan has a small LED screen for users to dial-in their preferred temperature. The temperature range on the Khan goes from 302F to 464F, which is a little higher than the Four’s range of 356F to 428F. The Khan also uses a 2500mAh battery and an all-ceramic heating chamber. It also features an all-aluminum exterior similar to the Four. The Khan, however, has a small LED that allows users to set their temperature. It also vibrates when the device is ready to vape. The Four and Khan both have glass mouthpieces and a clear vapor path. 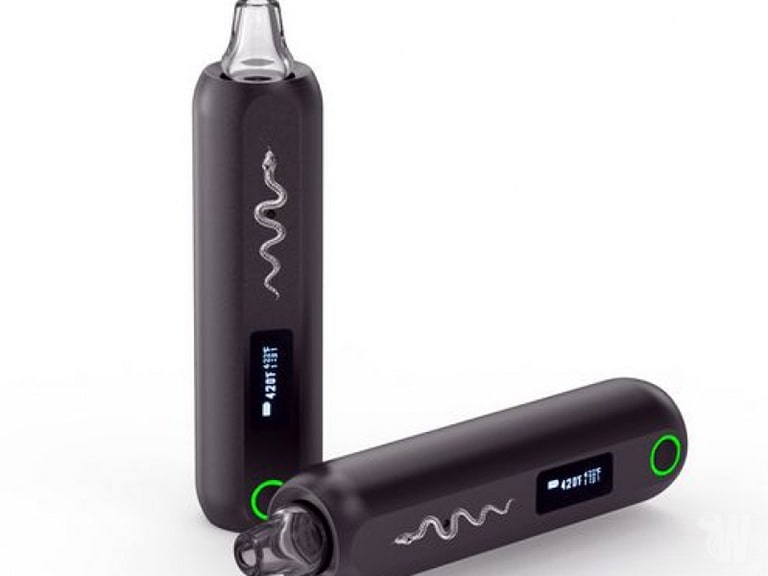 The Pax 3 is a dual-use (herbs and concentrates), portable vaporizer that uses a bottom-loading, all-ceramic heating chamber. The Pax 3 also uses an all-aluminum exterior and has a clean, sleek design, with only the center button as the unit’s primary power button. The Pax 3 uses conduction heating, and it comes pre-loaded with four heating levels, much like the Four’s five, preset heat settings. Unlike the Four, the Pax 3 is Bluetooth compatible, and users can connect it to their smartphone to unlock added features like precision temperature control, even games that users can play. The Pax 3 has a powerful 3000mAh battery, which is only slightly larger than the Mig Vapor Four. 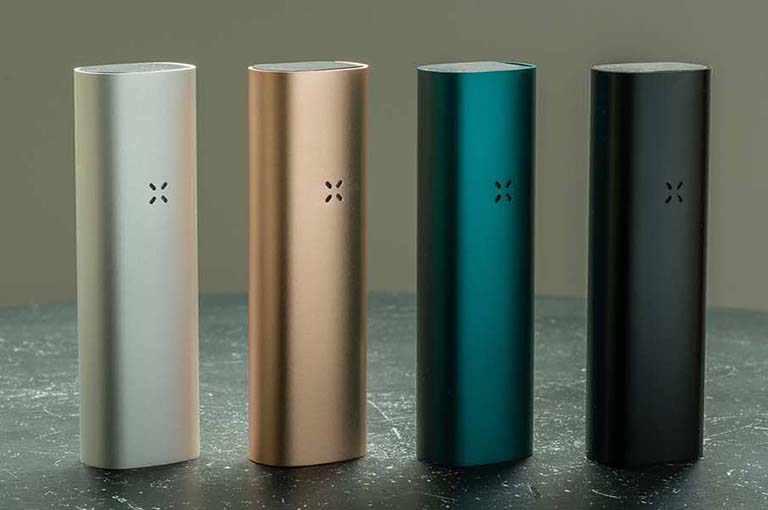 Have you used any of the competitor products? Are you a fan of Mig Vapor vaporizers, in general? How do you think they fare against other brands? Let us know what you think in the comments section below.

The Mig Vapor Four has a simple, straightforward design. Its wide-bore chamber opening allows for easy filling and refilling, while the glass mouthpiece delivers smooth, great-tasting, contaminant-free vapor every time. The battery lasts a good long while, and vapor production is on par with even the greats.