The longer travel time from the oven to the mouthpiece can be a detriment on some devices, but direct oven to mouthpiece vapes can also get somewhat hot when set on the highest temperatures, so we will see how the Loki Touch works or does not work on that level.

The LED touchscreen that runs down the center of the majority is responsible for precise temperature control between the range of 90C and 220C. There’s a thirty-second warm-up time on the Loki Touch that promises to get your herbs cooking in the blink of an eye.

Along with indicating the battery level, and letting you control the temperature through individual increments, the touch-screen doesn’t have much else to offer, other than some funky read-out numerals.

We all know that in the world of Norse mythology, Loki was the god of mischief and a trickster. There’s nothing tricky, however, about the Loki Touch, a new entry to the dry herb vaporizer game from the company, Loki Vapes.

It is a rather simple device, however, not easy to use. There are a lot of hidden features and things you need to discover about the Loki Touch, so it is not as simple as loading and vaping. The loading chamber, for instance, is located at the bottom of the mod and works on oven-to-mouth vaping. 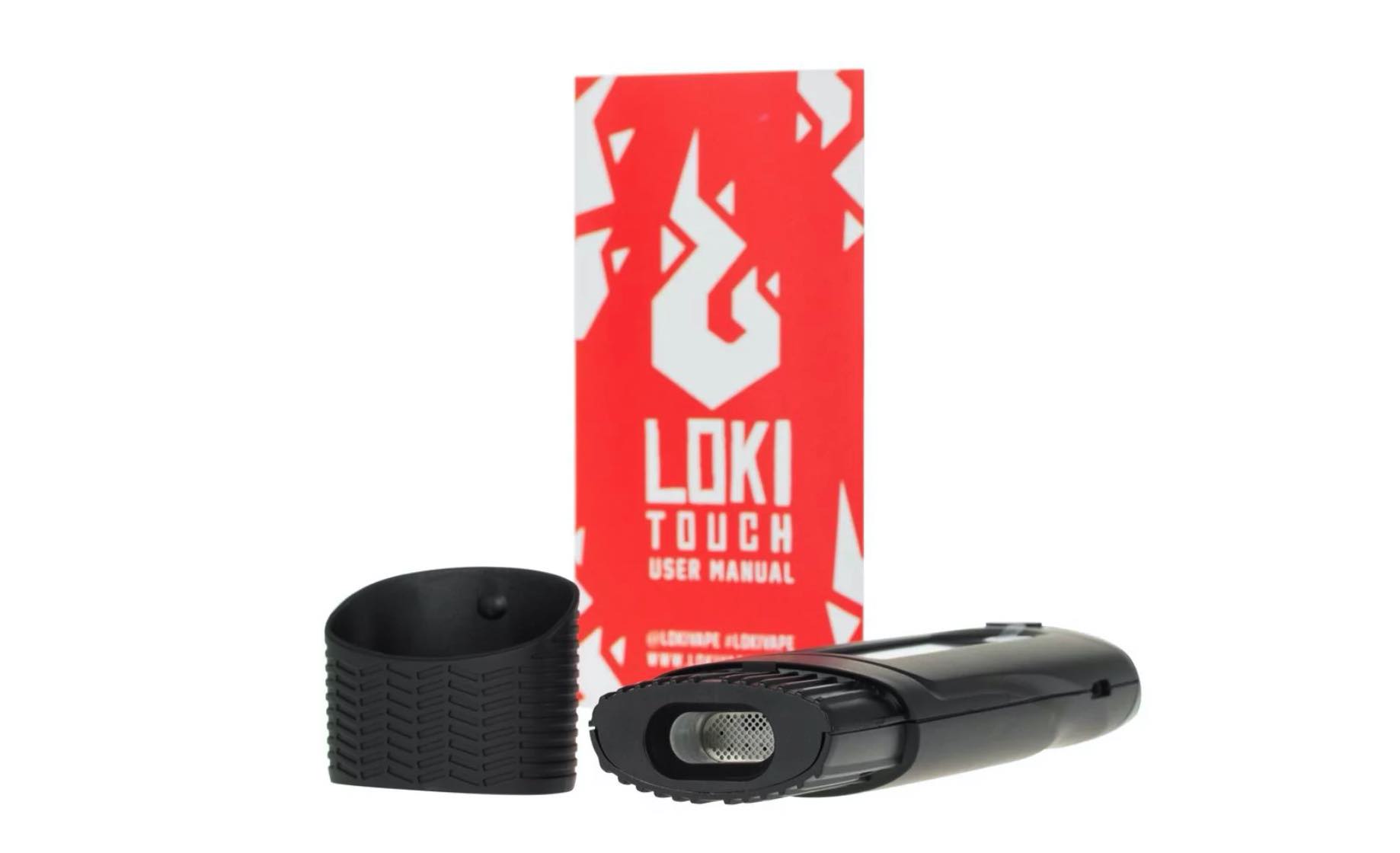 The Loki Touch is a big boy. It looks that way at least, but once you have the device in your hands, you feel and notice a few things. While the unit certainly has some heft to it, it still lends itself to easy portability for being only about five inches tall and one and a half inches wide. So while it doesn’t disappear into your hand, it can still be carried around without much hassle.

The Loki Touch features a silicone-based cover for the bottom loading chamber that can also fit snugly in your hand. The cover is also to prevent from feeling the immense heat off of the device, which can reach internal temperatures of close to 220C.

I was intrigued by the bottom, removable chamber that is usually found underneath the mouthpiece on most dry herb vapes. It’ll be interesting to see how the tank placement affects vapor production and quality. In my mind, the Loki Touch kind of looks and feel like a remote control.

There’s only one activation button on the Loki Touch, and the rest of the device’s features get controlled by the touch-screen, which in itself, is not such a dazzling feat of engineering as it once used to be. Slapping a big, touch-screen on your device doesn’t always ensure the highest quality vaping experience, but we will soon see how the Loki Touch performs.

The bottom-located chamber slips off rather easily to reveal the ceramic heating chamber inside. At the bottom of the chamber, you’ll find a metallic screen meant for your dry herbs, but the Loki Touch comes with “herb chamber” screens that look like little steel wool pads, so I wasn’t too convinced of the usefulness of these industrial-looking filters. 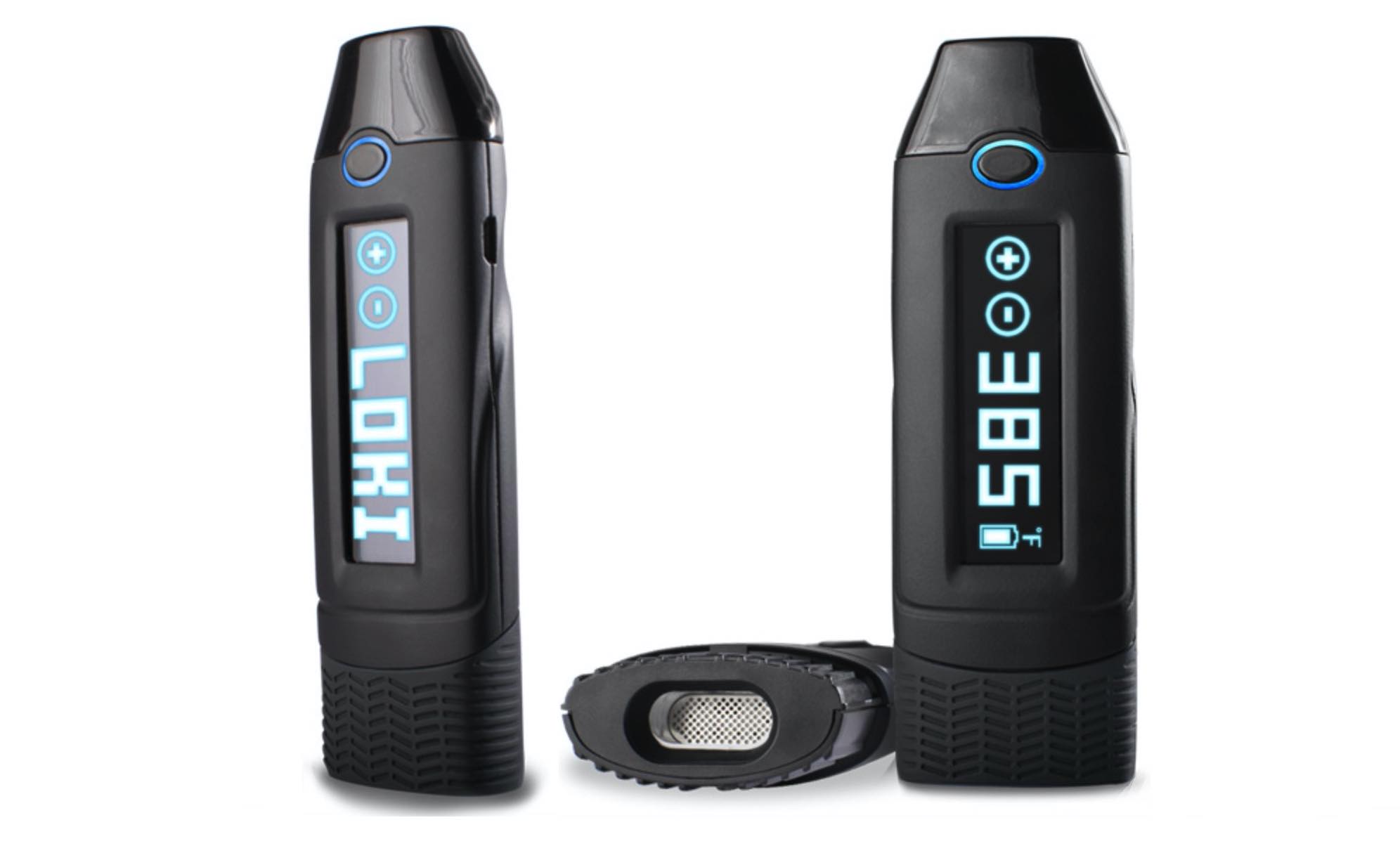 Once you have filled the chamber, you just snap the bottom back onto the device, and you are ready to vape. The Loki Touch comes with a silicone cap to cover the chamber area when attached, and it would be best to use the cap while vaping since the entire device does get noticeably hotter when in use.

There is only one real button on the Loki Touch screen, the power button. You click that button five times to turn the device on; you’ll see the touch-screen activate, display the last set temperature and begin heating the device based on that previous setting.

And besides letting you precisely control the temperature, there’s not much else that the touch-screen lets you do to the Loki. There are safety features, like the five-second cut-off time and the ability to toggle between Fahrenheit and Celsius, but other than that, it was a shame to see the Loki Touch taken up by such an outdated piece of hardware like a touch-screen.

But, anyway, with the device loaded, you can begin adjusting your temperature to the degree that you enjoy the most. Hitting the material inside with a heat wave right at the outset might give you great cloud production, but a slower, incremental burn is best for getting savory hits and eventual room foggers.

I started at a lower than expected 175C and then made my way up top. I found that just after the 200C was when I was starting to get a perfect balance of flavor and cloud production.

But I also started to feel the heat coming off of the Loki Touch, and if it weren’t for the silicone chamber attachment for heat protection, I fear that the Loki Touch would, literally be too hot to handle; literally. 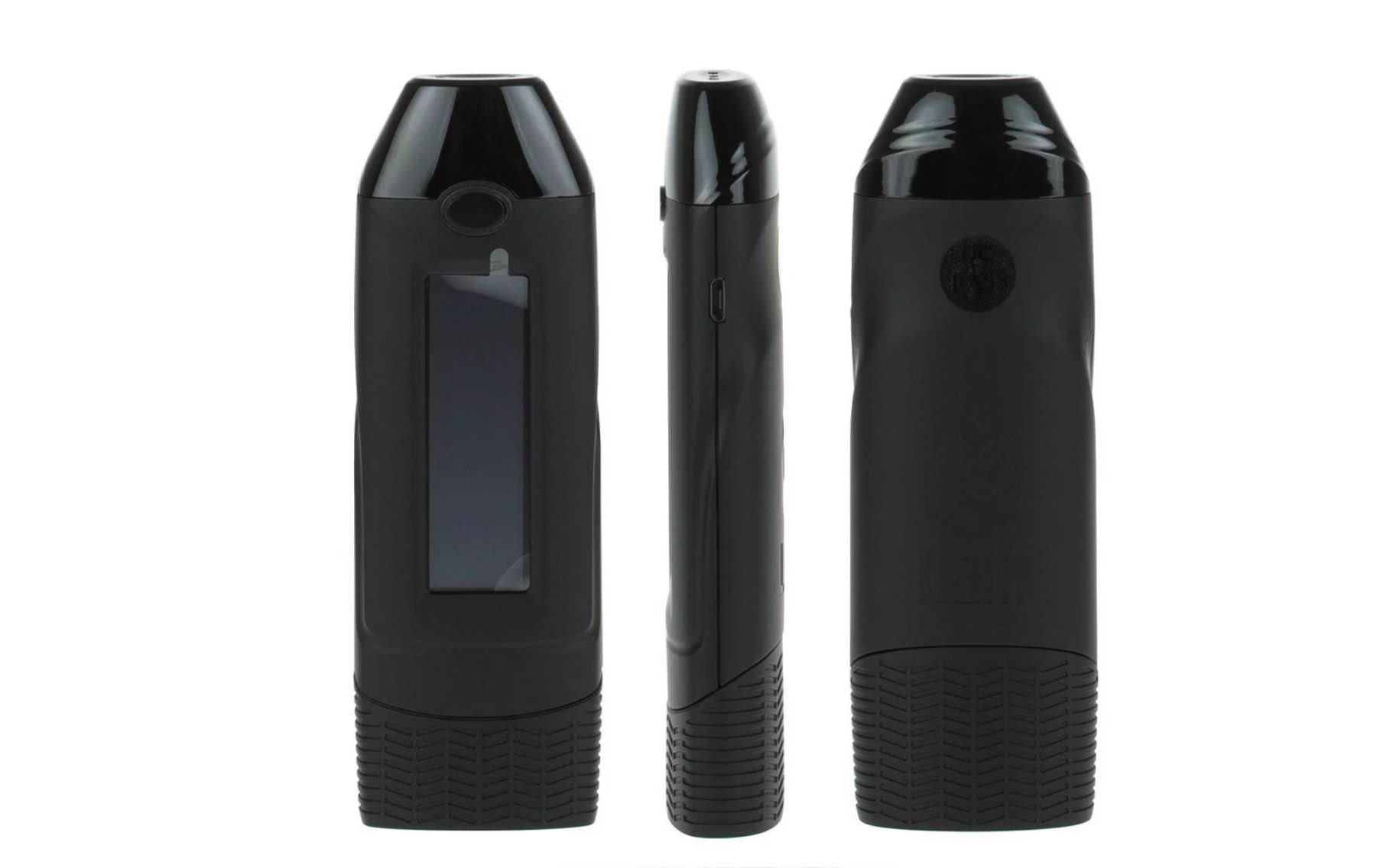 Again, I was momentarily surprised by such novelties as the ability to swipe up or down the individual digits of the temperature read-out, but you get over things like that. So, one more time, the touch-screen on the Loki “Touch” didn’t add to the overall vaping experience.

Vaping With the Loki Touch

I was initially troubled by the bottom-placed materials chamber on the Loki Touch. I’m usually a fan of having the mouthpiece directly over the chamber that always delivers, great (sometimes harsh) direct throat hits. Overheating can also be a problem for those types of mods.

But I was impressed with something like the Linx Ares that worked in much the same way with concentrates since it had no dedicated loading tank, but sucked up vapor like a straw and still delivered in the flavor department. The Loki Touch, I’m sad to say, did not deliver as well as the Linx Ares.

The long vapor path must have mixed given the stream a chance to mix in with impurities and the taste of other unwelcome components. I initially felt a great deal of flavor as the device slowly began to warm up, but with each successive increase in temperature, I noticed the flavor diminishing, which is something you don’t want.

And on top of that, the device became hotter and hotter with each temperature increase. A disastrous combination, to be sure. A device that delivers poor-tasting and uneven cloud that also gets too hot to hold? You cut me deep, Loki Vapes.

I mentioned the Ares from Linx before, but that was a comparison made to illustrate how a long vapor path could still deliver on flavor and texture. But for a point-to-point comparison, I found myself recalling something like the Utillian 651, which was yet another sturdy, well-built dry herb device.

The Utillian 651, however, is much sturdier and doesn’t feature an all-plastic outer casing, like the Loki Touch unfortunately does. The touch-screen was a poor attempt to improve the otherwise cheap appearance and feel of the Loki Touch. The Utillian 651 was a much better-looking, and better-designed vape mod. And its mouthpiece directly over the chamber ensured high quality vaping.

The bottom located chamber did allow Loki Vapes to increase its capacity a little, letting you pack more product into your tank and making it easier to fill as well.

You know things are bad when I start to praise the font, but in all honesty, I thought the choice of letter style for the touch-screen was interesting. The digits are hard to miss, and they reflect a spacey, wacky side to the Loki Touch.

If you are going to be able to control the temperature settings on your mod, I think it’s always better to do it at the individual incremental level rather than cycling three of five pre-set temperature settings. The Loki Touch, fortunately, lets you do the former, so that’s always a plus.

This is always a game-killer for me. I know it’s always a balancing act to provide enough heat to deliver decent flavor and cloud production, as well as keeping a device safe and comfortable to hold. Some mods get this balance right. Others, like the Loki Touch, do not.

I didn’t like the long passageway through all the unit’s electrical components, to finally arrive at the mouthpiece. In my mind, it negatively impacted the vapor flavor and size, and it was not to my liking.

If I’m shelling out $150 for a dry herb vaporizer, I better get some quality design and parts. The cheap plastic feel of the Loki Touch brought it down a few levels, even despite the hi-tech addition of a touch-screen.

Two things that a device always has to deliver, in my mind, are decent flavor and vapor production and to not overheat. That’s it. Lose those two, and you’ve lost me. Maybe, like his cinematic counterpart, the Loki Touch will make another appearance in another form, somewhere in the future, but for now, I would leave him where he is and get something else.