In eternal words of the hilarious Martin Lawrence, “Damn, Gina!” Or should I say, “Dayyyyyyyymmmmmnnnn”. KandyPens just keeps on keeping.

The last few KandyPens devices I reviewed worked incredibly well and outperformed a lot of the competition regarding technology and cloud production. But a few of them (save the KandyPens Ice Cream Man) left out the part about being a gorgeous, top-of-the-line KandyPens vaporizer. 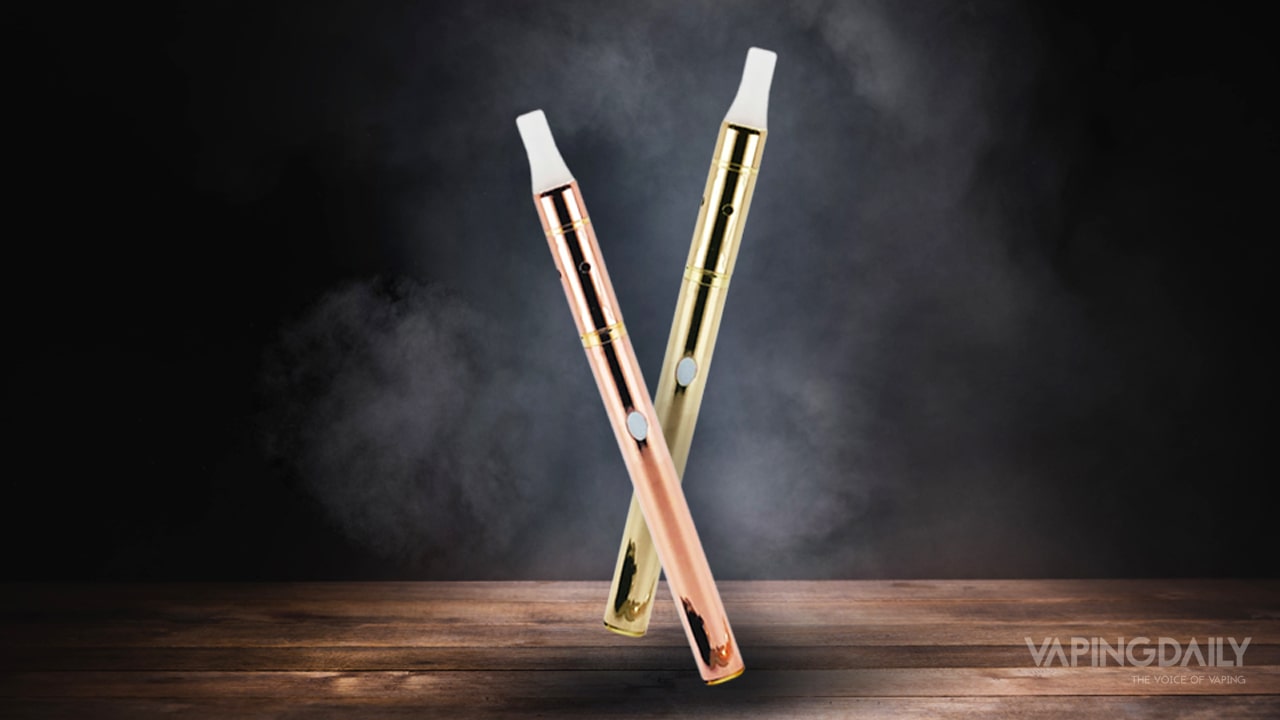 The KandyPens design team must have heard about my whining and they came up with the flatly titled KandyPens K-Stick and the K-Stick Supreme (boring names, though). And like the Prism and Prism+, the K-Sticks are two separate vaporizers with one being the standard model and the other featuring a few upgrades – I’ll let you guess which is which.

The K-Stick, version one and two, is a slimmed down (slim-like-a-stiletto-heel-slim) take on the wax vaporizer. Both models feature a 280mAh built-in battery, and each of them has three separate color combinations that range from black/gold, blue/gold, white/red for the K-Stick.

Where the K-Stick Supreme differs is in its build, which is stainless steel compared to the regular K-Stick’s rubber satin finish. The K-Stick Supreme also has three color combinations of gunmetal/gold, rose gold/gold/, gold/rose gold.

Here’s what you’ll find in your KandyPens K-Stick and K-Stick Supreme box:

It’s just beautiful. The gold accents in the center and the mouthpiece are the icings on the vaping cake for me. But lest I be accused of vanity, the K-Stick Supreme also has some internal features that do make it the more attractive choice of the two.

The K-Stick and the Supreme do have a lot in common though. Specifically, the 510 threads on each of the batteries so the atomizer can be switched out for a different oil canister. Although, both models do have less than spectacular power output with a 280mAh battery.

As I mentioned above, one significant difference between the K-Stick and the Supreme is their construction material. The former has that famous KandyPens rubber satin finish, which I am a huge fan of; I like the softness and how easy it is to grip.

The stainless steel construction of the Supreme makes it vulnerable to overheating, but with such a small battery I don’t think that’ll be a problem. Internally, the two pens are also similar. They both, unfortunately, have only one quartz rod wrapped with titanium wire.

The two models differ at the tops and bottoms as well. The K-Stick has a flat, small bore mouthpiece made from a pretty cheap plastic foam. The K-Stick does not have any LED lights at the bottom like the Supreme has to indicate which voltage at which it is vaping.

There’s not much assembly needed or expertise in vaping to use either the K-Stick or the Supreme. You remove the mouthpiece to reveal the ceramic chamber inside. The chamber itself is funnel-shaped, so all the melted wax concentrates nicely at the bottom and doesn’t leak out.

If you ever want to clean the chamber, just leave the mouthpiece part off, turn the device on, and press the firing button to heat the coils. Turn the device upside down, underneath a container and let the excess wax or oil drip down.

I did as I instructed and I placed a small amount of wax that I finally picked up after much procrastination. And as expected, the clouds did not exactly billow; repeat: no billowing. There’s only one coil in both the K-Stick and the Supreme.

There was nothing I could do about the low-cloud production on the K-Stick since there were no adjustable settings (I even tried drawing a little harder, but it was to no avail). I went to the highest setting on the Supreme (there are three: green light (low), red light (medium), blue light (high)) and found it did get a little hot, even uncomfortably so.

But with only a 280mAh battery there was not much it could do to vaporize my dab well. Sigh.

Stacking Up the KandyPens K-Stick

I went way back to find a comparable vape pen to stack up against the KandyPens K-Stick. The Omicron was a dab pen that came with two batteries but only needed one to operate so you could keep one charged while using the other one.

I decided to stack up the K-Stick (both versions) against the Omicron for all the wrong reasons however; neither of them left much of an impression. They both worked; that part is obvious. But neither of them worked very well.

The K-Stick, even for a device from KandyPens, under-performed. After trotting out so many dual rod heating chambers, I don’t know why KandyPens decided to go back to only one coil. The Omicron was equally lackluster, it took a little long to heat up for a wax vaporizer and the cloud production was minimal.

So, based solely on looks, which the K-Stick and the Supreme have in spades, I give it to them over the awkward-looking Omicron.

This one was a given. I was immediately taken by the style and beauty of the K-Stick, but the Supreme even more so, with its rose, gunmetal finish which just hit the right spot in terms of attractiveness.

KandyPens, the one heating rod was a mistake. Sure, this is not a top-shelf device but that doesn’t mean it is not deserving of that KandyPens magic. If not a second rod, then at least a donut-heating element.

Saying a wax vaporizer is easy to use is not saying much about it. But that was the case with the KandyPens K-Stick and Supreme.

280mAh? Really, KandyPens? A 280mAh battery couldn’t even power the frown that I’m wearing right now because of the fact that you decided to stick such a spectacular looking device with such a puny battery.

It was only the K-Stick Supreme that had variable voltage settings, and that was much appreciated especially with the presence of only one heating rod.

I never thought this would happen, but I wasn’t impressed with a KandyPens device. A KANDYPENS DEVICE! But, granted, a red flag immediately went up when I saw that the K-Stick was also being sold in a package of three, which should set off anyone’s crap alarm right away.

The Supreme made a noble effort to live up to its namesake, but the effort was mediocre at best. Even with variable voltage settings, there was little that a 280mAh battery could do with only one heating rod.

The K-Stick is the bottom-of-the-barrel for a great company like KandyPens, but I didn’t understand why they would waste their time with such mediocrity. You really sullied yourself with this one, KandyPens.