It’s nice, you know, after controlling so many vaporizers that I finally get one that tells me what to do. Get it? “Tells me what to do”? No? Nothing? Well, I bet after you finish using the Herbstick Relax and reread this review you’ll be wetting yourself with laughter.

The Herbstick Relax is a dry herb vaporizer (for aromatherapy purposes only, wink, wink) that offers a good piece of advice and gives you an easy-to-use, good-looking device that features a 2220 mAh battery and adjustable temperature control through its side LED screen.

The outer casing of the Herbstick Relax is a hard-cast aluminum alloy, so it’s a knock-around vaporizer you can take with you anywhere. The Relax has a top opening mouthpiece and a top loading internal chamber made out of stainless steel.

With the plastic mouthpiece folded out (the mouthpiece fits flush into the top of the battery to make the Herbstick look just like an herbstick or a remote control) The temperature range on the Relax is 248F to 437F, so it’s highest temperature rivals some of the other portable vaporizers out there like the Flash.

Taking a Look Inside

The first thing you’ll see when you open up the Herbstick Relax box is: 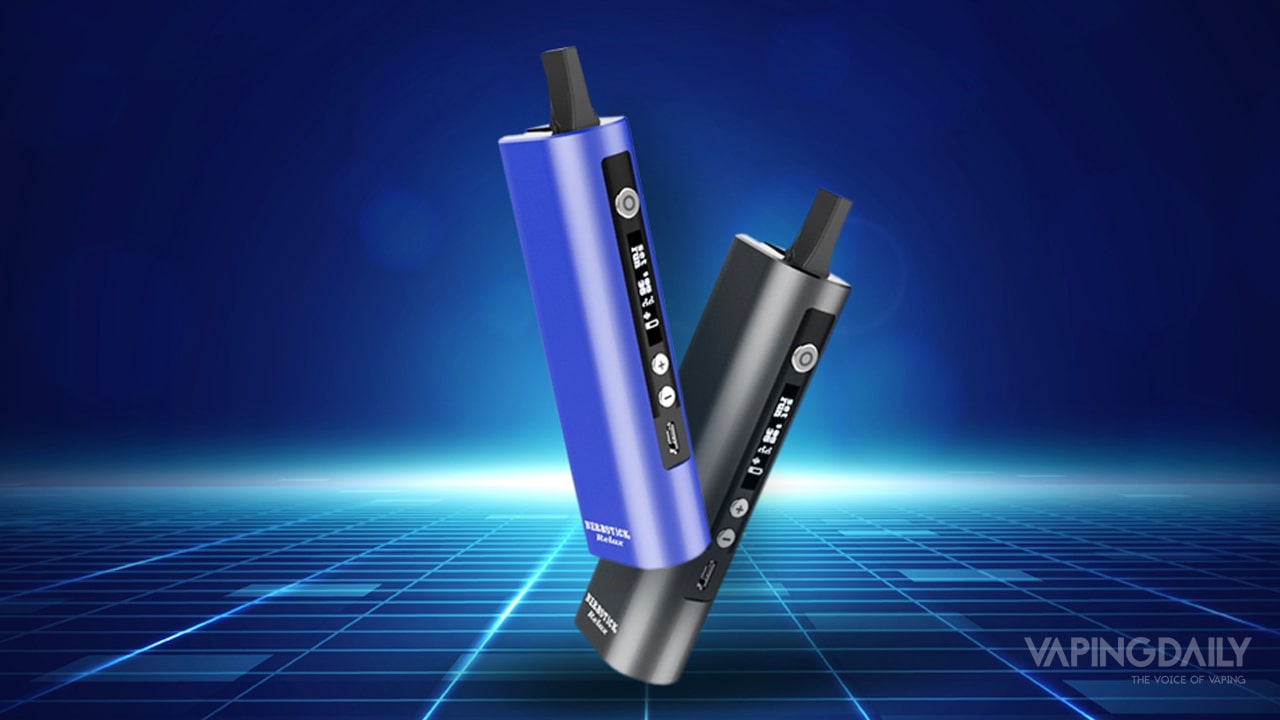 I got the Relax all-black model (there are blue and pink options as well), and when I opened the box the Relax was practically invisible; the coloring on the device was so intense the battery just seeped into the mold it was encased in. Only spotting the Herbstick logo on the bottom of the device made me realize it was there.

The Relax is sexy little vaporizer. It felt great in my hand thanks to the aluminum alloy finish and all the controls to the device were placed just right, close to where my fingers were, which made it easy to use. The LED display reads out the temperature levels and the battery life.

There’s a large power button right next to the screen and two selector bottoms on the other side. Going down a little further is the USB charging port; everything you need to use it right up front.

The top cover and the mouthpiece pop off to reveal the ceramic chamber underneath. It seemed wide enough to pack a sizable amount, a half a gram I would say. The specs say that the Relax can go from 248F to 437F so since it was well below what most other vaporizers max out at, I didn’t expect to be getting dry hits feeling the unit overheat.

I didn’t find the Relax that difficult to operate. You do the standard five-clicks-on to start the device heating up. You set your preferred temperature and let the device reach that temperature. I counted at least forty seconds before the unit started vibrating to alert me to its readiness.

The mouthpiece came off easily even though it was held in place by magnets. You just pressed one side to make the other side pop out. The chamber has a lid on this device that was also a filter. I was a little worried about this – having a piece of plastic in between me, and my vapor is never a good thing.

I scooped in my herbs and packed it in moderately. I put on the lid to the chamber and set the mouthpiece back on top, just that easy.

I clicked on my device and waited for it to heat up. The Relax also vibrates when it’s ready to vape. I started on a modest 300F to see how many variants there were between the temperature, in terms of the vapor flavor and cloud production.

The cloud was good, the flavor strong and there was no heat register. So I started to let the Relax get loose and started pushing the temperature up by at least five increments; you can’t go up by individual increments.

And it was all consistent. It consistently got better. Everything did: the cloud production, the flavor, it was all on point. Once it did start getting close to max temperature I did notice a little heat coming off of it, but nothing so significant that I would have to put the device down.

I think the most comparable unit to the Relax would be something suave like the Atmos Aegis, which also had a collapsible mouthpiece that fit flush into the top cover.

The Aegis was a strong performer in terms of its vapor production and flavor profile. It had a little overheating problem, I think, and the mouthpiece felt a bit awkward to me. But you could change the temperature by individual increments on the Aegis, and you can’t on the Relax.

Overall, however, I think the Relax would take it because of its sleek design and ease of use and great vapor production.

The Herbstick Relax is a great, little machine for herb vaping. It has a superb look to it; the collapsible mouthpiece made the device stand out for me since it gave it a different appearance. And the Relax performed better than expected.

There wasn’t any diminishment in the flavor or cloud with the higher temperatures, except I was a little disappointed with the heat register.