The brand is known for making some of the best bang-for-your-buck herb vaporizers. The Flowermate V5 0S Mini is their most portable vaporizer to date, and it has a lot of positive qualities.

It is a budget herb vaporizer with variable temperature control. It has three different temperature settings to choose from.

It is a rather ambitious herb vaporizer. It doesn’t have a ton of features compared to more expensive vaporizers. For instance, it has an aluminum body that makes it feel very premium in the hand. Plus, aluminum is a very light metal, so it won’t be too noticeable when it’s pocketed. It has a pretty nice matte finish that actually tends to hold up pretty well over a lot of time and use.

The Flowermate V5.0s Mini vaporizer features rapid charging. It can completely charge in around 2-3 hours. Sure, that isn’t the fastest charging time. Maybe calling it “rapid” is a bit of an exaggeration on its part. However, a lot of vaporizers take far longer. For the price, it’s pretty rapid. 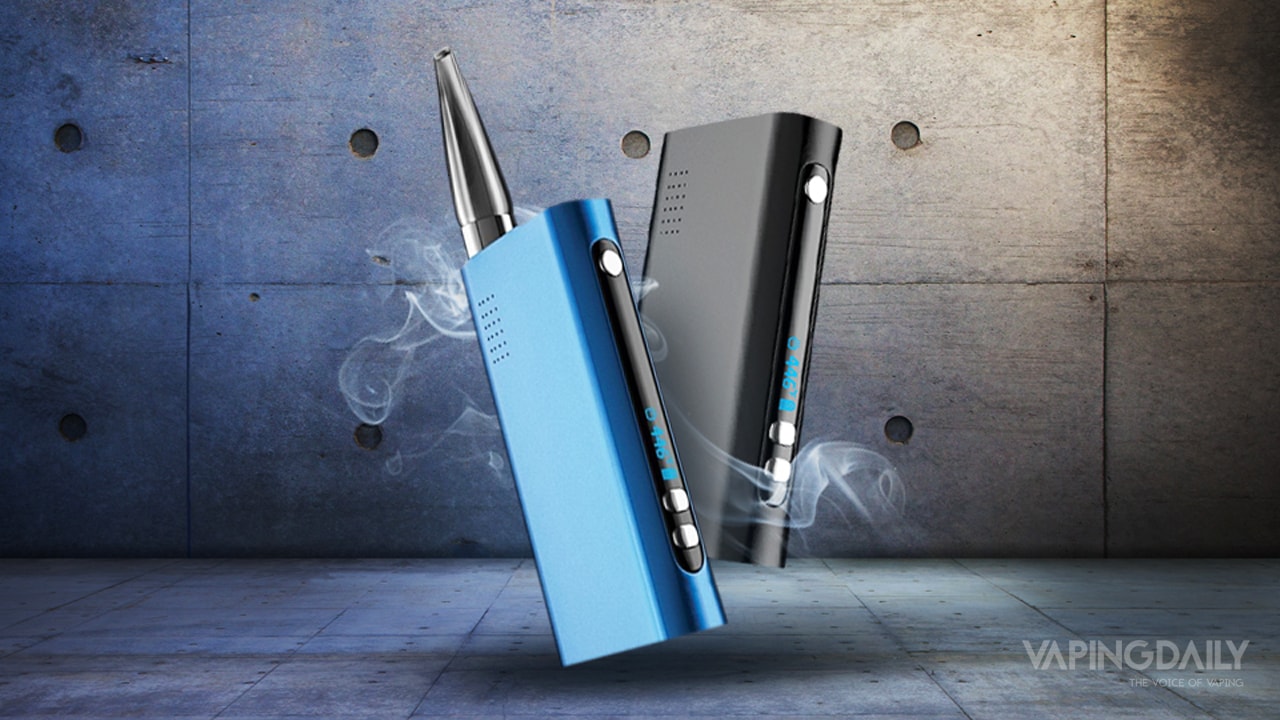 The vaporizer offers superb flavor. This is made possible by the high-quality materials used in its design. It features a ceramic herb chamber and a glass mouthpiece. Ceramic materials don’t affect the vapor’s flavor, and neither does glass.

The result is a very flavorful vape session. The vapor that the Flowermate V5 0S Mini produces is very pure-tasting. The flavor of the vapor will be a lot like the smell of the dry herb being used.

The Flowermate V5 0S Mini can vaporize dry herb as well as concentrates. It comes with a dry herb pod as well as a concentrate pod. Installing these pods is a simple as choosing one and dropping it into the heating chamber.

The concentrate pod was a thoughtful inclusion, but those that want a vaporizer primarily for concentrates might want to look elsewhere. The vaporizer works with dry herb very well, but its concentrate vaporization is lackluster. 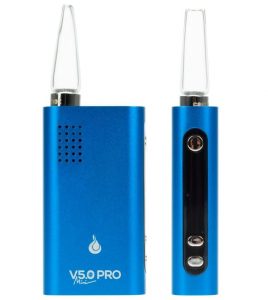 This is mainly because its highest temperature is 415°F. That’s enough to satisfy most dry herb vapers, but with concentrates, it results in pretty weak vapor production.

The Flowermate V5 0S Mini has variable temperature control that gives the user three temperature options to choose from. Each temperature is indicated by a different LED color.

To alternate between temperatures, just hold down the power button.

The device comes with a variety of useful accessories that most vapers will appreciate. It comes with the unit itself, obviously, as well as the detachable glass borosilicate mouthpiece. 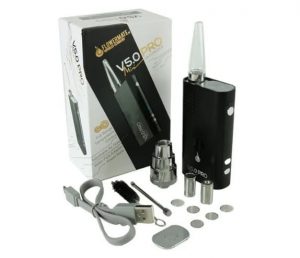 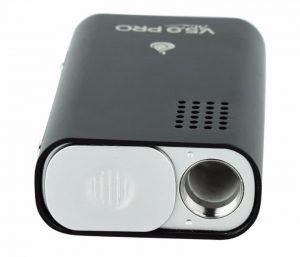 The dry herb pod has small holes for better airflow, while the oil pod does not. Oil could potentially leak from a pod with holes, so everyone should be extra careful and use the correct pod.

The battery is about half the size of the one found in the V5.0s. That’s how they were able to make it so small.

It does, however, compensate for the smaller battery with rapid charging. Charging typically only takes 2-3 hours, and a full charge provides 2 hours of use on average. 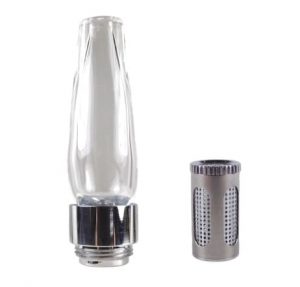 Stainless steel won’t affect the vapor’s flavor too much, and the difference doesn’t really come across that much during a vape session. Still, it would’ve been better if the pods had been made from, or at least lined with, ceramic or quartz.

The included borosilicate glass mouthpiece is awesome for flavor. Plus, it rarely becomes too hot for comfort. If it gets too hot too often, there’s also a silicone mouthpiece that’s sold separately.

There are several different bubbler adapters. Most of them only fit one bubbler size, but the most popular and versatile water pipe attachment supports 10mm, 14mm, and 18mm connections.

Using the Flowermate V5 0S Mini is extremely simple thanks to its intuitive interface. Simply press the power button five times to turn it on, and hold the same button down to cycle through the preset temperatures. 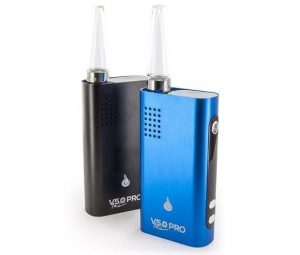 Packing the device with your favorite material is made pretty easy as well thanks to the pod system it uses. The user can actually remove their pod and pack it outside.

One might assume that the Mini Pro is more expensive than its predecessors, but it’s actually very close to the V5 0S Mini in terms of its price thanks to a recent price drop.

Why is it better? Well, it has a digital display and full temperature control, which allow the user to adjust their temperature setting degree by degree. 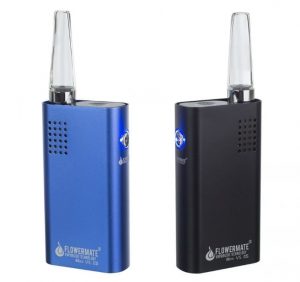 The Flowermate Mini Pro’s full temperature control allows for a wider range of experimentation and customization.

The Mini Pro goes all the way up to 446°F/230°C, which is significantly higher than the maximum temperature offered by the V5 0S Mini vaporizer. Additionally, it’ll yield much better vapor production with dry herb and especially with concentrates.

If that wasn’t enough, the Mini Pro comes with a water adapter. While the V5 0S Mini works with the same water adapter, it needs to be purchased separately.

The Mini Pro even works as a power bank that can be used to charge a smartphone, a tablet, or even another vaporizer.

It isn’t even a competition. The Mini Pro is the superior vaporizer, and with practically no difference in price, there’s no reason to buy the V5 0S Mini over the Mini Pro. 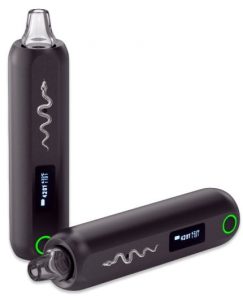 Pax vaporizers can get pretty expensive, but when they release a new model, their previous model usually sees a big price drop. That’s why a lot of people give the $150 Pax 2 a great deal of consideration when looking for a budget vaporizer.

The Pax 2 has four temperature options as opposed to the Mini’s three options. However, it only goes up to 420°F/215°C, which is so close to the Flowermate’s 415°F that no one will really notice a difference. 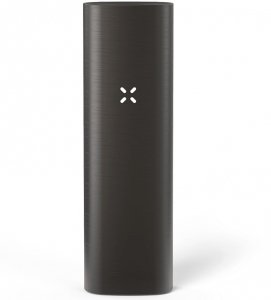 The Pax 2 is significantly smaller, so it’s recommended most to those that prioritize portability.

Aesthetic appeal is subjective, but most people will still say that the Pax 2 looks a lot better. It’s also recommended to those that want the prettiest vape.

The Flowermate Mini was made for vapers on a budget. It’s also great for vapers that prioritize portability and discreetness. It’ll slide into a pocket with ease, and the user usually won’t notice it there.

However, the vaporizer isn’t for everyone. It won’t cut it for those that want the most features and the most power. It just doesn’t have those things. It does, however, have a price tag that’s very hard to beat.

A borosilicate glass mouthpiece and a ceramic heating chamber are great for flavor. It has three different temperature settings, maxing out at 415°F/230°C.

For extra portability, there is a storage chamber located near the bottom of the device that’s intended for this device’s mouthpiece.