The Flowermate Swift Pro is a compact, convection vaporizer for dry herbs that has full temperature control. The vape has a slim, portable form factor that can fit into any pocket for on-the-go vaping. The Pro features a small LED panel with two adjustment buttons for precise temperature control.

It also makes use of an isolated air-path that sends heated air through the material to create more flavorful vapor. The unit’s internal chamber is borosilicate, but the kit includes heat retention rings made from different materials. These rings provide another heat source, while also tingeing the vapor with varying taste signatures.

The Flowermate Swift Pro: Up Close

This vape stands at around 4 inches tall and about 2 inches across, so it is quite compact. The Pro, because of its size, has an ergonomic grip and a vaper could easily take it with him/her anywhere. The top section of the Pro features the mouthpiece that sits flush within the device but swivels out when in use.

The top section is more than the mouthpiece, though. It is an entire unit that is removable as it sits above the borosilicate heating chamber. The metal chamber that sits above the oven features removable screens and parts that provide extra filtration for the emerging vapor. They all can be taken apart for cleaning, which they will need. 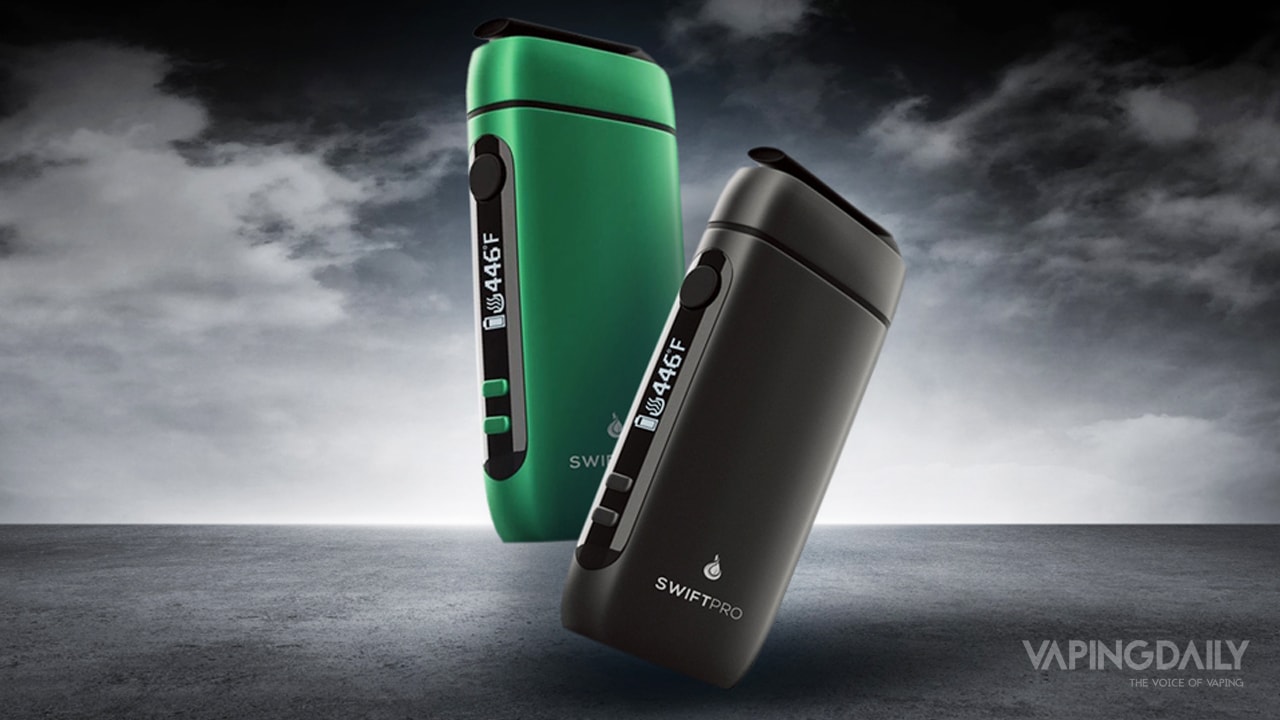 The chamber on the Swift Pro is also removable. Flowermate includes a unique tool to remove the oven, again, for cleaning purposes. One unique thing about the chamber on the device is the “heat retention” rings (three come in the kit) that ring the oven and serve many functions. One, of course, is that they, as their name suggests, retain heat.

So, even though the Swift Pro is full convection, with the rings installed, there is an aspect of conduction as they heat up to vape the herbs evenly. As mentioned, the oven for the Swift Pro is removable, which is rare for most convection dry herb vaporizers. 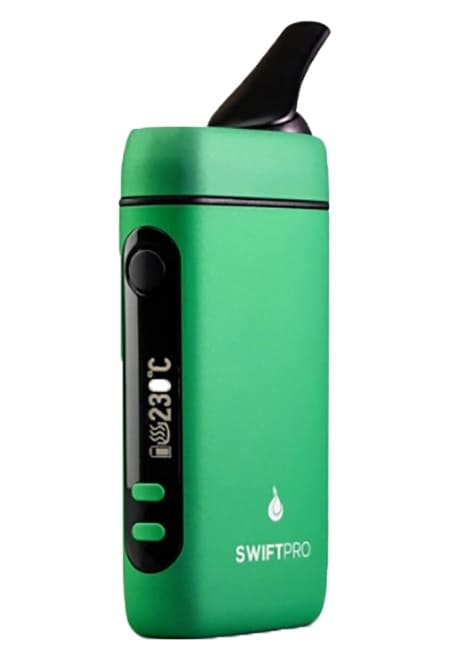 Underneath the chamber is the isolated airflow that runs from the base of the unit to the oven. The airflow does not pass through any electronic parts, so there is no metallic or unpleasant taste to the vapor. Also, on the base of the unit is the USB charging port, which is in an awkward position.

On the side of the vape is the LED panel with the power and adjustment buttons. This aspect of the device is very no-nonsense, as the LED shows only the temperature and an icon to show the device has reached the set temperature, nothing more.

Dry herb vaporizers are famous for containing all the necessary things a unit needs, plus a few things more if they are feeling generous. This device falls into the latter category as it comes with a plethora of extras, both useful and handy. 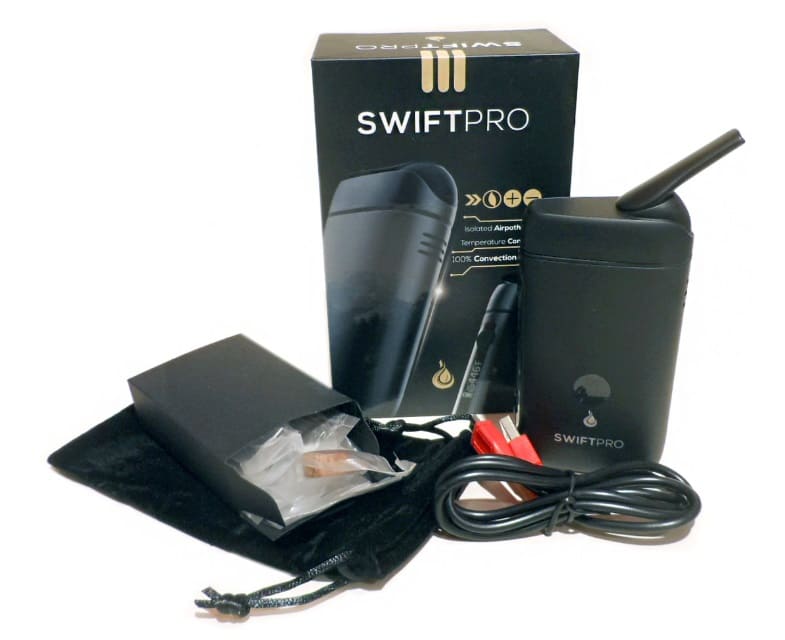 Among the many tools and accessories included in the Flowermate Swift Pro kit, there is one that makes using the unit much more comfortable. It is not the cleaning brush or dab tool. Neither is it the charging cable or the retention rings (although, of course, all these tools are useful as well). The tool most useful, at least according to this review, when vaping the device is the loading tool.

This little plastic attachment is a godsend, as it makes loading material into the chamber so easy. It drops into place, fits snug into the opening, and no matter the coarseness of your grind, all of it will end up where it should — in the chamber. There is little to no spillover, and when the oven is full, it comes out as quickly as it enters.

The other tools worth mentioning when using the vape are the retention rings, as they also stand out for their simplicity and originality. To install the rings (all four come in the kit), which are made from either:

A user must first remove the top ring of the chamber, install the ring, and then screw the chamber down to hold the ring. Of course, the rings are optional, as the borosilicate oven functions as a pre-installed ring. The novelty to using the rings is one draw, as well as the subtle flavor differences between them.

Apart from the internals of the device, using the device is very straightforward. It takes five clicks of the power button to activate. The device starts heating up right away to the last programmed temperature, but the user can also input a preferred temperature and wait for the device to reach that setting.

As this is a convection device, the heat-up time is longer than with conduction units, although it is worth the wait. The Swift Pro takes about thirty seconds to reach its set temperature. A heat wave icon will appear on the LED when it is ready to vape.

Experienced dry herb vapers know the differences between conduction and convection units. They are two different heating styles that lead to distinct experiences. Conduction is fast and produces huge clouds, whereas convection takes a little time but delivers a unique flavor and sensation.
Mention was made of the heat retention rings added a bit of conduction, as they would heat up to add a bit more heat to the material. After using the device, though, the rings do their job to keep heat within the material, rather than adding to it. 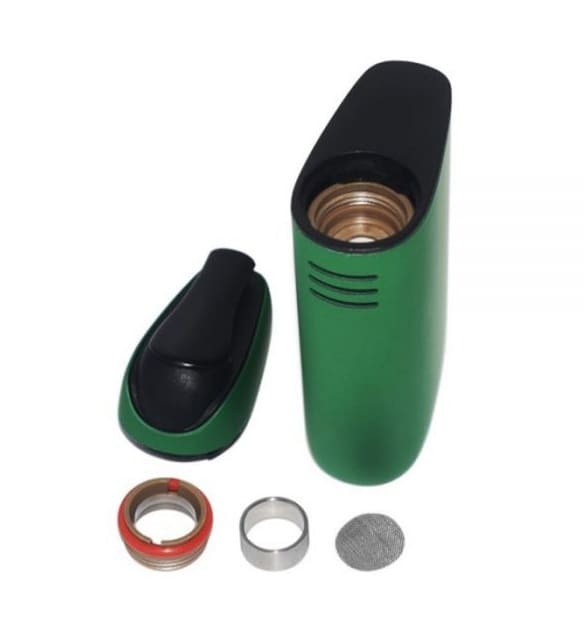 The ring(s) did not get extremely hot (warning: do not touch the inside of the oven after vaping). After a single session, they were warm, but as they were designed to conduct heat rather than become hot, they were easily removable. The various build materials of the rings, from bamboo to rosewood, gave off several different flavor notes that were unique, without being too distracting.

The loading tool helped a lot in using the Swift Pro. It helped to load as well as unload the material. Other than loading, turning it on, and setting the desired temperature, there’s not much else to the Swift Pro, which is a good thing. Its simplicity and performance are a welcome change to all the more complicated devices out there.

The heat-up time may be a sticking point for some people, but thirty seconds is a small amount of time to wait for great-tasting vapor. The temperature range is also vast, as the base temperature is 140F to 446F. And ultimately, the vape delivers on that one factor that distinguishes convection from conduction, which is the flavor.

The Boundless CFX is a hybrid convection/conduction dry herb vaporizer with an 80W power output. It has a wide temperature range starting at 100F and going all the way to 430F. The Boundless also features full temperature control via the 1.7 TFT screen at its base that lets users input their preferred setting. 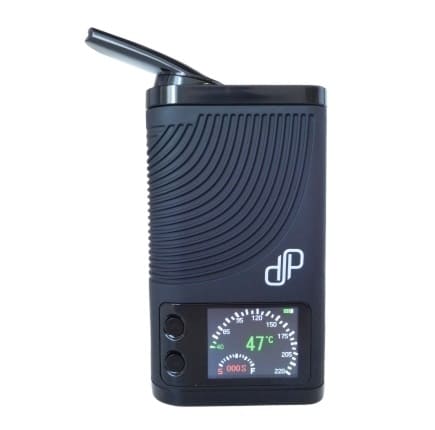 The CFX also features an internal battery with a 2500mAh capacity so the device can heat-up within only twenty seconds. The Boundless uses an all-ceramic heating chamber and works with both herbs as well as solid concentrates.

The Arizer Solo 2 is also a hybrid convection/conduction dry herb vaporizer with full temperature control, and a clear, isolated vapor path. The Arizer Solo 2 has a front-facing LED for customizing not only the temperature but the brightness of the screen, and the volume of the notification pings. 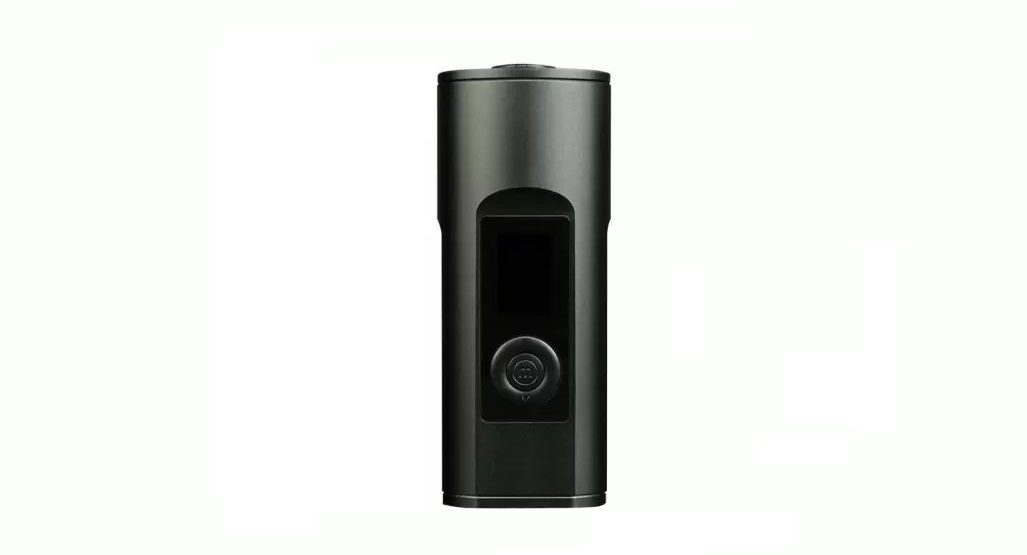 The Solo 2 uses glass tubes as both the chamber and the mouthpiece, as users load the bottom of the tube, and then inhale from the top part. The unit has a heating range of between 122F and 428F.

The full convection heating-style of the device makes it ideal for flavor connoisseurs. The small size and easy controls also make it the right choice to satisfy people who want a discreet and portable vape. The Flowermate Swift Pro does borrow some elements from a device like the Boundless CFX. It has a similar shape and size, as well as the swivel-out mouthpiece, but its performance and functioning are all it’s own.

The simplicity of the Swift Pro is what attracts the most. All the tools and accessories that come with the device are also what make the Flowermate Swift Pro a delight to use, specifically the heat retention rings and the loading cap. Some of these accessories come at an extra cost for certain other models, like the Boundless, but they come free with the Swift Pro. The tools are also not just gifts. They add a particular twist to the device that makes it stand out from the rest.