So it turns out that I’m a vaping innovator. I was a vaping innovator way back in high school, and I didn’t even know it. I had to review my first La Queef 510 E-nail to realize that I was vaping with the best of them back when I was doing hot knives.

Now, in the interest of not alerting the authorities to my wayward past, “hot knives” was the last resort for those, uh, aromatherapy enthusiasts who lacked the implements to properly aromatize their luscious flowers. 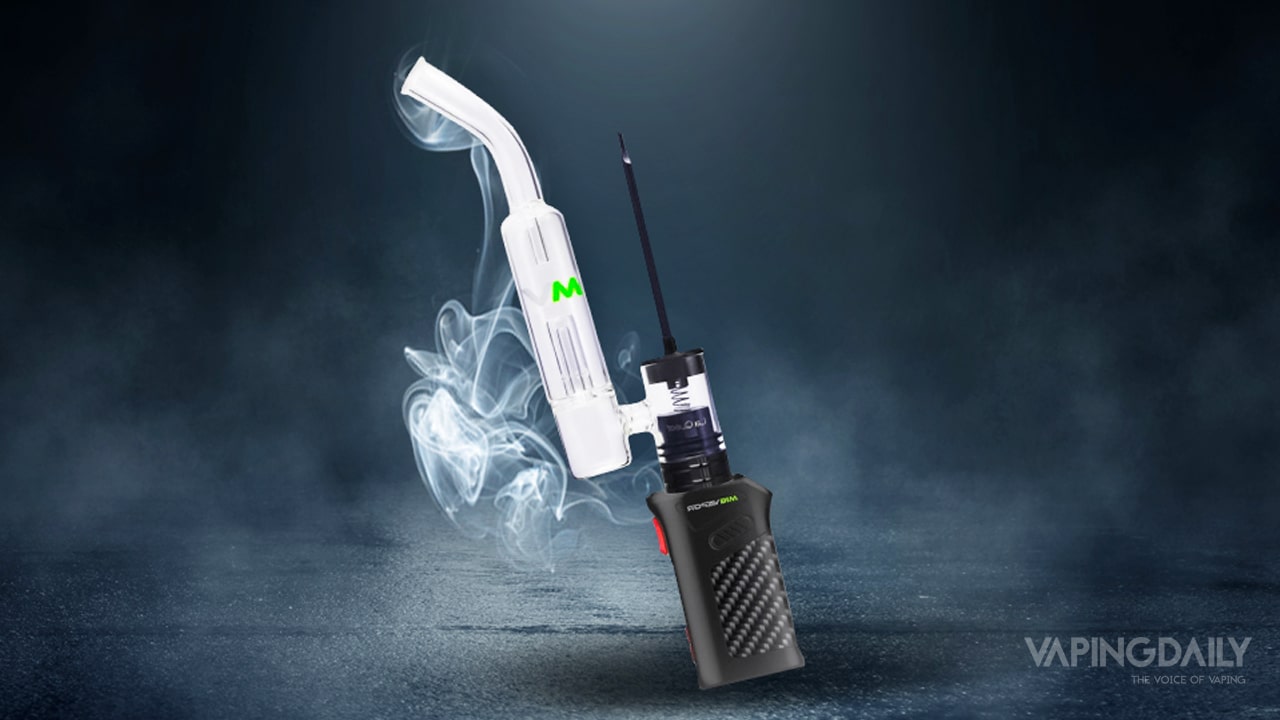 It was a primitive, but rather effective fix. You held a steak knife (I found the wider surface of a butter knife was always better) over a hot stove element until it was red-hot, and then you pressed that hot knife against your potpourri, which was also on a hot knife, to atomize it, which then resulted in copious amounts of vapor.

And all this was before the age of vaporizers, and now, E-rigs and E-nails, where all that prep work is replaced by coils and mods that do all that heating for you. This is the first time I’ve reviewed an E-nail, so I’m pretty excited.

And I’ll try not to let my immaturity get the better of me, by writing the name of this particular E-nail combo, the La Queef 510 E-nail from Mig Vapor. The kit comes with two separate coil systems, one for dry herbs and one for dabs.

There is no separate mod that comes with the kit, but it does have 510 connectors so you could screw it into any compatible device.

The Insides of the Kit

The box is somewhat large given the size and amount of parts that come inside. Here’s what you’ll get:

What About the Design

Well, there is not much to comment on, like I would with a box mod or a dry herb vaporizer. The entire kit is made of different components, so all the pieces have to be put together to review the performance of the e-rig, hence the title “e-rig.”

So if you do not want to spend a lot of money on a whole mod or vaporizer, the La Queef and a lot of other dry herb tanks, or concentrate tanks are the options for you. But to use the device you would need to purchase or have at least a box mod.

The two coil options have different setups. The dry herb coil resembles a ceramic heating chamber similar to those found on most dry herb vaporizers. The dab coil has a small little “B-Box” inside the coil where you can easily drop in your concentrates.

Since there’s not much to talk about regarding the build, feel, circuit boards, tank build, screen interface, or any of that other fun stuff that you have to incorporate into box mod reviews, let’s just vape some herbs.

Dabbing With the La Queef 510 E-Nail

Again, nothing too complicated is setting up your rig. Any box mod that can vape above 15W does the trick, and that’s mostly every box mod out there. The smaller ones would be best, like a mini or nano mod, and since I’ve always liked using Vaporesso products, I went with their Target Mini-mod, which Mig Vapor also carries.

I started off with the dry herb coil, which can vape at around 0.5ohms (the concentrate coil goes down to about 0.7ohms) and the dry herb coil has a stainless steel choker attachment that you can use to press down your herb into the bowl.

The chokers, each coil has one distinct choker, were a nice addition, and the magnetic attachment on the back worked great with the magnetic end of the dab pick, which snapped together perfectly, so it made for quick and easy placement and removal.

The dab pick was a better accessory since it’s essential to get your concentrates right where you want them. I filled the bubbler tube with water, which didn’t need a lot, and I slipped the tube attachment onto the coil head.

The bubbler tube can be swung out, so it doesn’t interfere with the mod itself, and makes the whole rig more comfortable to hold. And that was it concerning setting up the device.

After getting my E-rig ready, putting my Vaporesso Target Mini at 20W, I pressed the firing button. I had my choker in place, and I would say in less than five seconds, the tube was already full up with white, milky goodness.

After taking my first haul, I was reminded of what my friend Cam used to say, “if you don’t cough, you don’t get off.” So expect some major lung exertion on this rig.

The herb heated up super-fast and the ease with which the choker and tube concentrated the flavor and cloud made for a cloudy day inside my office. I vaped a full bowl – there are no exact specs on the bowl capacity, but I got in less than a third of a gram – and the rig performed swimmingly for the entire bowl.

20W was the perfect power output since anything higher would just burn the herb, and then you’d only be smoking it. Using the dab coil had more or less the same effects. It warmed up nice and even, thanks to the ceramic chamber inside, and the cloud production was superb.

The flavor was so robust and full; the dab surpassed even some great-tasting e-juices that I’ve used, just for the natural, earthy stink that it had, which is what I would prefer a million times more than e-juice.

The coils/cups/bowls/chamber could have been a tad bigger, but again, a small chamber size like with these coils still guarantees an efficient use of your herbs, since you don’t have to pack the chamber full. Putting in just a smattering of either herb or concentrates still resulted in potent, great-tasting clouds.

The La Queef is such a simple setup that there’s not anything I didn’t like about it. The bowl size could have been a bit bigger, but again, there’s a tradeoff in that you use more material than you need to. So a smallish chamber capacity has its advantages.

For those quick releases when you inhale, these chokers worked perfectly. And the added dab tool/handle for the chokers was a great design feature.

The tube was a good size, fit easily, but snugly onto my mod and didn’t need a tremendous amount of water to cool the vapor. The mouthpiece felt comfortable and sturdy, and it moved easily for greater ease-of-use.

I couldn’t compare the La Queef 510 E-nail to anything else since this is my first time reviewing this type of apparatus, but after using the La Queef, I’m definitely down for reviewing more like this. The setup was easy; all the parts performed their roles beautifully, and I was happy with the efficient use of my materials.