With all the technical and design prowess that Vaporesso infuses into all their devices, I’m anxious and excited to see what the outcome is when they direct their expertise into one single element, namely a sub-ohm tank. But because this is Vaporesso, it’s not just any sub-ohm tank.

The Vaporesso Cascade sub-ohm tank stands head and shoulders above most pretenders to the sub-ohm, high-wattage throne (I’m looking at you SMOK). The amount of new and innovative features found in the Cascade is staggering.

It’s e-juice capacity tops out at 7ml, one milliliter more than the Cloud Beast King’s 6 ml capacity. But that’s not all. The e-juice reservoir inside the Cascade is kept separate from the atomizer, which sits in the bottom section of the tank, and has e-juice dripped onto it from the above reservoir.

And this two-tiered design on a tank that still only measures about 60 mm in height and 25mm in diameter. Apart from the introduction of the two-chamber design, the Cascade comes accompanied by the brand new GTM coil, which is every high-wattage vaper’s dream come to life.

The GTM coil can vape (supposedly) at a 200W, which puts it in the same company as the V12-T12 coil from SMOK. But should you feel unwilling or unprepared to take your vaping experience to such heights, the Cascade kit comes with a coil adapter explicitly made for Vaporesso’s GT coils.

The Box, The Box!

With your purchase of the Vaporesso Cascade sub-ohm tank you will also receive the following: 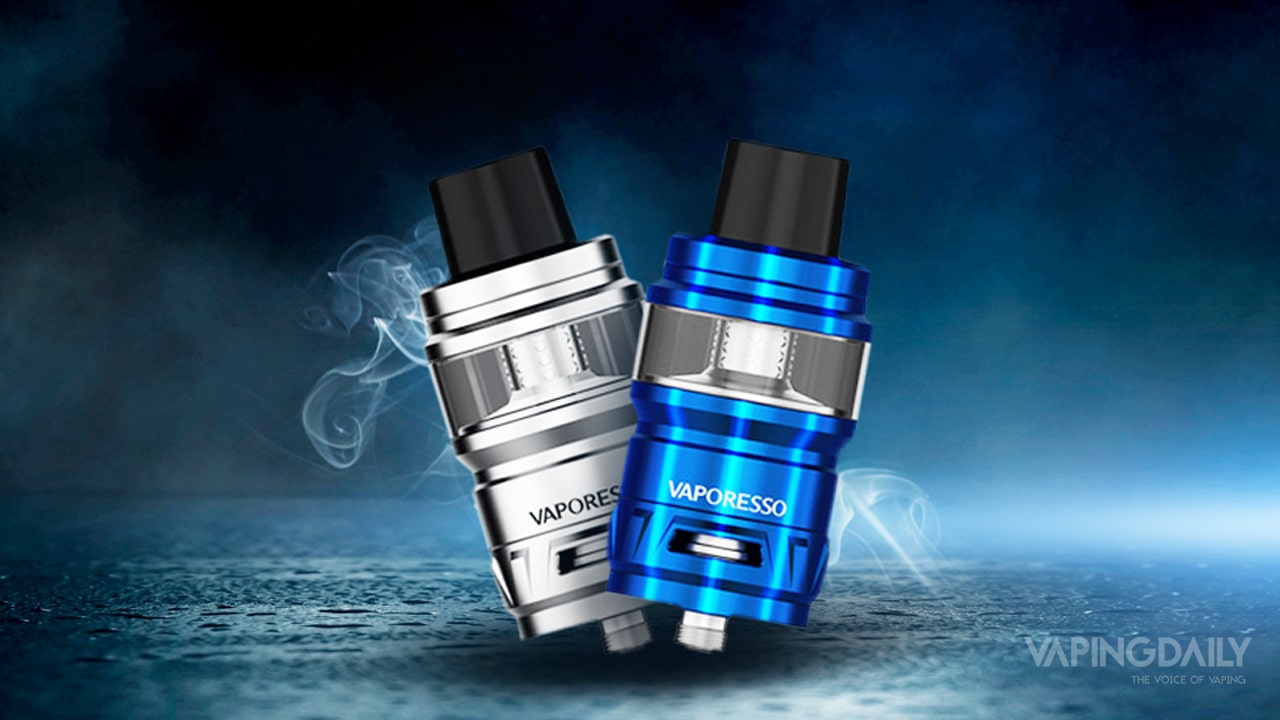 The Vaporesso Cascade is a meaty sucker. It has a pumped-up, beefy look with its sharp metal accents (the tank is made primarily of stainless steel and Pyrex glass). The number of curves and indents on the tank make it a beautiful tank as well.

There are four color options the tank can come in, matte black, sapphire blue, rainbow, and stainless steel. And while a standard version of the Cascade will come with a conventional colorless glass tube and black Delrin drip tip, Vaporesso also sells colored glass tubes and some fantastic, colorful resin drip tips that just knock it out the park regarding attractiveness.

The Cascade is a hefty little guy, but at 80g in weight, it still weighs less than its closest competitor, the Cloud Beast King, which weighed in at 90g. The entire tank is made up of close to six different components, seven if you include the GT coil adapter.

But everything about the tank lends itself to easy disassembly, and I found myself being surprised by how many hidden features the tank contains, such as the top cap being reverse threaded so that you can replace the rubber fill port should it ever become damaged (a spare one is included in your kit).

The most interesting innovation present in the Cascade has to be the two separate chambers. Now, it might not look like it, but the Cascade does hold 7 ml of e-liquid in its e-juice chamber. But instead of dunking the entire coil in e-juice, the liquid gets diverted to the coil through a few juice holes at the bottom of the compartment.

This kind of design is supposed to prolong the life of your coils, and ensure that the coil is only saturated by as much juice as it needs to vape, so all of your inhales are consistently flavorful. The innovation continues with the triangle-based airflow vents that have blocking points making it easier to unscrew the base of the atomizer.

The GTM coils are not threaded, which is something we’ve seen on iJoy coils as well, and they are simply pulled out and press-fitted into place from the bottom of the tank. The GTM coils do recall their SMOK cousins, the V12-Q4, and the V12-X4, although the SMOK V12-T12 coil has no equal, even though the GTM-8 does have an octuple coil build and can reach a maximum of 200W.

Putting the Vaporesso Cascade Tank to the Test

It made sense to test out the Vaporesso Cascade with a Vaporesso mod, so I pulled out my Vaporesso Revenger mod, which is Vaporesso’s only 200W device and attached the Cascade to the top. The fit was perfect by the way.

I started out with the pre-installed GTM-8 0.15ohm coil but kept it reasonable at 80W, to begin with. I had enjoyed great tasting clouds with sweet, luscious flavors with other tanks, so I decided to satisfy my sweet tooth, and I loaded up the tank with some Caramel Cheesecake from White Label E-Juice, which had a 70/30 VG/PG content.

The vapor was truly sublime. It was dense, sweet and full-bodied. Upon exhaling, the vapor was extraordinarily thick and fog-like, so everything that I expected to get from the Cascade I got. I kicked up the wattage to 100W, and everything stayed more or less the same.

The vapor was very rich and full, the flavor was nuanced, with strong notes of caramel, and more subtle notes of chocolate. I did eventually make it all the way up to 200W and noticed the vapor getting a little too hot to handle, which was to be expected. The flavor profile, however, did not suffer and I was still able to detect all those subtly sweet flavors.

How the Vaporesso Cascade Measures Up

There weren’t many other options that could match the Vaporesso Cascade’s abilities and features besides its main vaping rival, the Cloud Beast King. I switched out the Cascade from the Vaporesso Revenger and attached the CBK outfitted not with the V12-T12 coil, but with a fresh lower-wattage-vaping V12-T6 coil head.

The T6 has a wattage range from 90-320W, which is mind-boggling, although the recommended range is between 130W and 200W so that it could compete with the GTM-8. I stuck with the same Caramel Cheesecake flavored e-juice and went to town.

And, it was hard to tell which tank and coil performed best, since they both performed incredibly well. I got the same amount of great-tasting clouds that I got from the Cascade and the GTM-8. The two tanks even share similar airflow vents with a triangular design, so even messing with the airflow only brought minimal changes in vapor production.

But, where the two tanks differ is in the special, Vaporesso-only touches that the Cascade features and which the Cloud Beast King does not. Vaporesso always does this, and this is why they are the premier vape company.

Knowing that a product needs to do more than just perform well, Vaporesso includes all these little touches that push their products first across the finish line. In the case of the Cascade, it is the GT coil adapter included with the Cascade kit, as well as the customizability of otherwise superfluous factors like the glass tube and Delrin drip tip.

Sure, you could use any number of coils with the Cloud Beast King, but you don’t have those little personalizable touches that you have with the Cascade. And with these two cloud behemoths performing more or less on the same level, it is ultimately presentation that gives the Cascade the win in this contest.

Vaporesso has finished 2017 on a strong note. They have been consistently spectacular throughout 2017, however, with the release of great products like the Revenger, Nebula, and Tarot Nano, all of which received high marks from me.

The Cascade is the icing on the cake. It is a great-looking, powerful, yet restrained tank that produces amazing vapor, both regarding flavor and cloud quality. All the parts of the tank are well-machined and feel incredibly sturdy and durable.

The GTM-8 coil can now stand as the only serious contender to the SMOK V12-T12 coil regarding power output. Although I see the end of high-wattage vaping coming soon, for the moment, the Cascade is a great entry into this competitive and cutting-edge market.