The GeekVape Zeus Dual RTA features stainless steel, and glass construction around a postless, four-terminal build deck. The Zeus has a 4ml e-juice capacity, with a space glass piece in the kit.

The RTA uses top airflow with two vents on either side that are adjustable, but also use a stopper. The kit includes two Delrin drip tips that are wide-bore. Users can switch between an 810 and a 510. There is a 510 adapter piece also in the kit. The Zeus Dual RTA kit also includes several o-rings, an Allen key and two, pre-wrapped Clapton coils.

The GeekVape Zeus Dual RTA: Inside the Kit

The GeekVape Zeus Dual RTA comes in a hard, clear plastic case, with the atomizer lying in a foam insert. 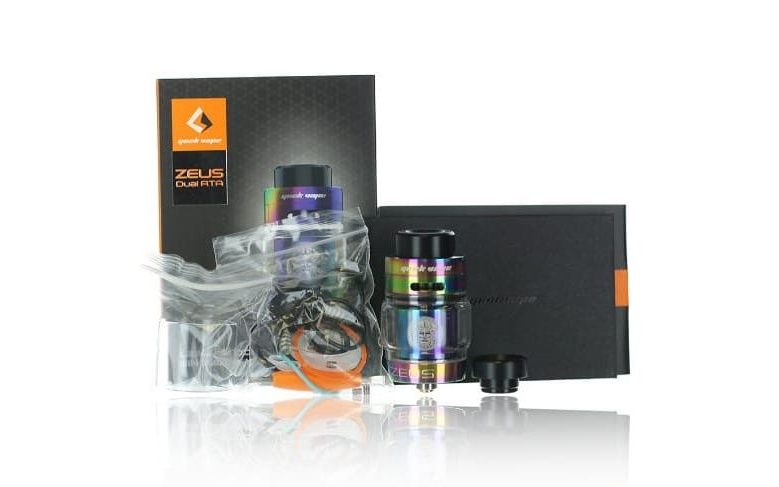 The Zeus Dual RTA is one fine-looking tank atomizer. It is all stainless steel, except for the glass tank section and Delrin drip tip, but stainless steel is also a color option. There are eight color options in total, and they all capture the smooth, classically-cut lines of the exterior.

The unit comprises five elements: the build deck, the chamber, the airflow control ring, the top cap, and the drip tip. Six, if you count the 4ml glass section (GeekVape sells a 5.5ml glass extender piece for the Zeus). There is a subdued Zeus logo etched onto the base, and an engraving of Zeus on the inner chamber.

Those simple design accents are enough to give the RTA a museum-piece quality. The finish on the outer edges is not glossy, and it also adds to the clean, minimalist aesthetic. The Zeus has a gold-plated 510 connection on the base of the deck, where there are also a few GeekVape logos.

The build deck unscrews from the bottom. The platform is postless, and it has four lead entries that dot the base. Two posts stand behind the lead terminals, which is where the air from the top airflow vents enter. The entryways are ramped, so the air comes from above and gets funneled upward as well, toward the atomizer heads.

The other two sides of the build deck are where wick leads should go, as there is a little juice well under the deck. The chamber is extensive and makes up most of the device’s bulky middle. There are plenty of thick o-rings to keep everything in place.

The airflow control ring sits above the glass and moves in either direction but has a stopper to keep it from doing a 360. The pre-installed 810 Delrin drip tip is removable, and the mouth of the top cap can take other 810s or with the 510-adapter, the 510-mouthpiece in the Zeus Dual RTA kit.

The Internals of the Zeus Dual RTA

The build deck on the Zeus Dual RTA features a no-post design, so vapers have to drop their leads into the terminals. They are then side-secured with two flat-head screws on either side, four in total. The Zeus deck can support single and dual coil builds.

All the internal parts, as well as the external, are well-machined and impressive. Two posts on either side of the terminals support the chamber but are also useful for airflow. GeekVape calls it 3D airflow, as air comes in through the top air vents, passes over the coils, goes down, and then gets redirected up. 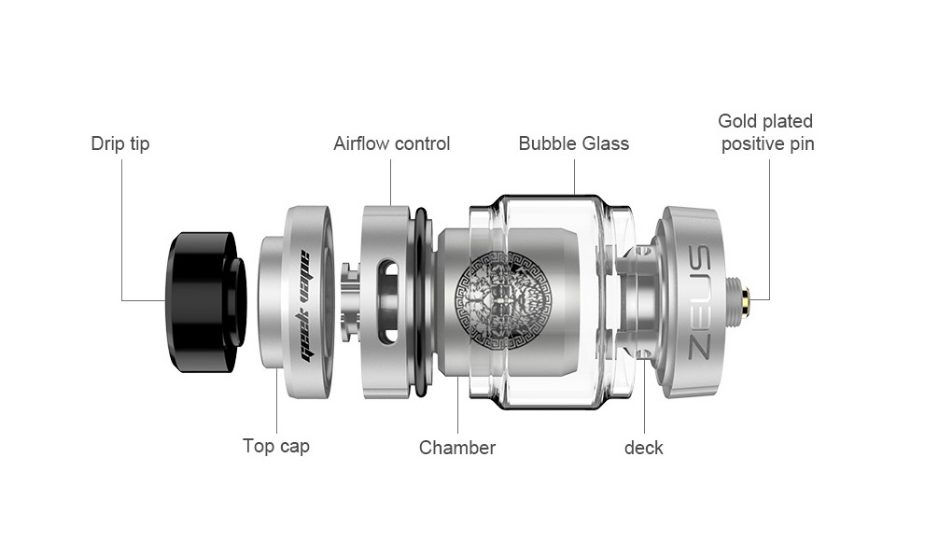 There is a small juice well under the deck, or on either side, and it is the ideal place to put wick ends. All in all, the Zeus deck has a simple build-process, no matter if it is a single or double coil configuration.

The side-screws are a little small, which can make it a hassle to secure the leads, but other than that the rest of RTA holds-up nice. Using the pre-wrapped Clapton coils included in the kit would make mounting even more comfortable, but also using your coils would not be a problem.

Coils with a diameter larger than 3mm (0.11 inches) would be pushing it, regarding whether they can fit in the chamber. The pre-wrapped Claptons in the kit measures about 2.5mm (0.09 inches) in diameter and are a good fit for this deck configuration.

With the post-free deck, mounting a pair of atomizer heads or just a single coil is quick. Any vaper should make sure they don’t have any hot spots on their loops, and when wicking, some vapers may want to leave long leads thinking that they need to reach down into the well.

They do not. Instead, if they stretch down, they will end up blocking the airflow. It is best to leave the leads hanging off the side, saturate the wicks and then let them hang down where they will find their way into the juice.

When the build is done, screw the internal chamber back onto the deck, and then fill the tank. The Zeus Dual RTA has two top-fill ports and a threaded top cap, so users have to unscrew it to fill the tank.

Once the tank is full, screw the atomizer onto any 510-threaded mod or hybrid mech mod, as the Zeus has a gold-plated, protruding 510-pin. With a single coil in the tank, the vapor production was still good. There was more flavor than clouds, and the high PG e-juice was also responsible for that.

Using both Clapton coils in the kit, as a dual coil build, gave off the best results, although most vapers would prefer to wrap and mount their coils.

The twin coils gave off both big and great-tasting flavor. Vaping just under 100W, at around 85-90W, was a right mix of power and performance and the coils fired at around 0.14ohms.

The Augvape Intake RTA tank features a dual-post build-deck made only for single coil builds. The tank has a 24mm diameter (0.94 inches) and measures 50.5mm tall (2 inches tall). The Intake has a 2.5ml e-juice capacity and comes with a 4.2ml glass extender piece in the kit. 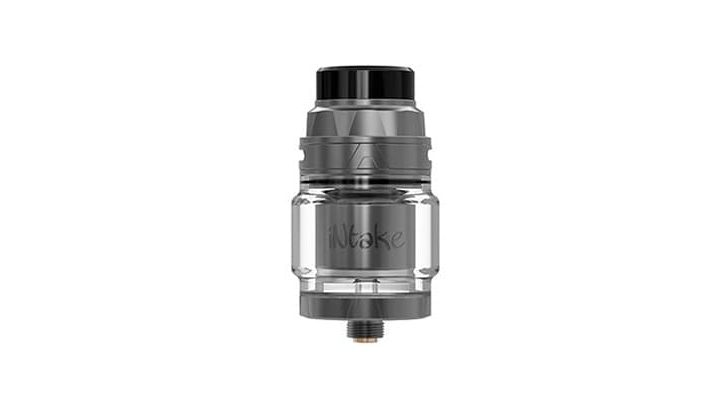 Each terminal opening measures 3mm (0.11 inches). The tank has two top airflow slots, measuring 10mm by 3mm (or 0.4 inches by 0.1 inches) that can be completely opened or closed. Up top, the Intake uses an 8mm (0.31 inches) 810 Delrin drip tip. The tank features a stainless steel and glass construction.

The Wotofo Bravo RTA supports single, and dual-coil builds on its two-post clamp-style deck inside the stainless steel construction of the exterior. The glass section can hold up to 4.5ml or with a glass extender piece 6ml. 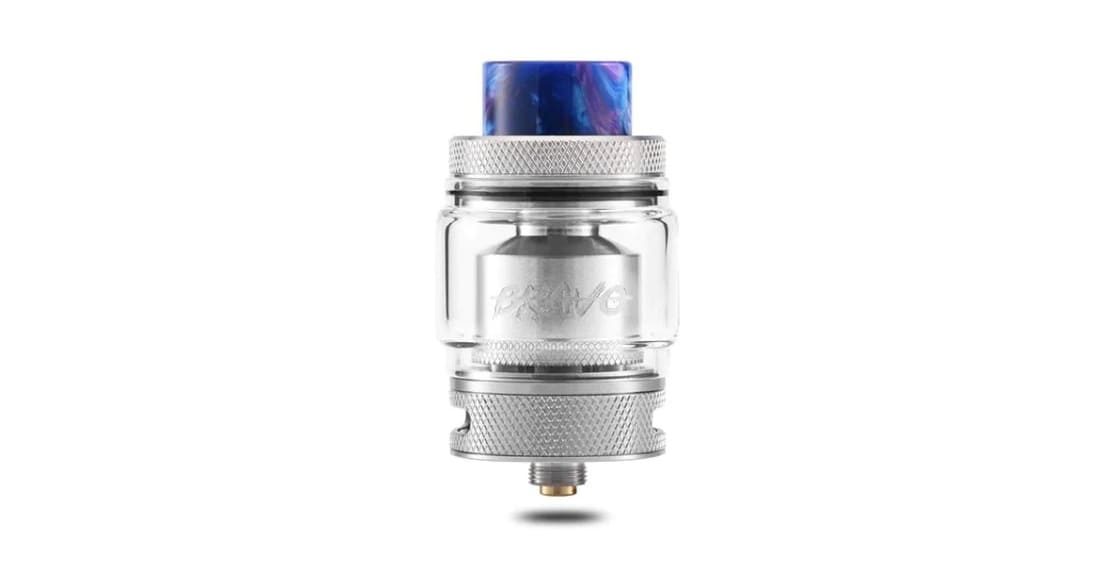 The unit measures 25mm in diameter (0.98 inches) and stands about 48.9mm in height (1.9 inches). The Bravo has a clamp-style deck, with two posts that secure leads with two top flat-head screws. The terminals measure 3mm in diameter.

The GeekVape Zeus Dual RTA is a definite improvement on the older Zeus. It has a much more spacious build-deck making it easier to mount leads. The configuration of the chamber and the wick holes does make it tricky to replace the top when the wicks are wet, as the cotton expands and then prevents the cap from being threaded.

Vapers can try filling the tank, without priming the coils first, but that might lead to a dry hit. It would be best to try and skim away some of the wet threads of the coil, before replacing the top cap. But besides that minor, nit-picky point, the rest of the functioning, build, and performance of the Zeus is excellent.

It has a solid look and feel to it. It would have been better if GeekVape included the extender, 5.5ml glass piece instead of an extra 4ml part, but it’s okay. The Zeus logo is a great design accent that gives it both seriousness and authority. The threading, the smooth edges, and the design color of the exterior are all winners as well.