Wotofo has always been synonymous with flavor chasing atomizers. In fact, it has been dominating in that part of the vaping marketplace ever since the company came up with the Serpent Mini. It set the high standards that other RTAs had to follow to get the consideration of flavor chasers. This year, Wotofo seemed to have outdone itself with its newest addition, the Wotofo Troll RTA.

The first time Wotofo used the Troll branding was for two highly-successful RDAs; the Troll V1 and the V2. It was quite ironic because Wotofo used the troll-face meme. This connotes when a person just pranked (or trolled) another. However, the company did not really troll its customers by giving an awful atomizer. Instead, Wotofo released quality RDAs. Or, maybe the guys who run Wotofo are not familiar with the Western meme, or whatever. Regardless of Wotofo’s intent, the previous Troll RDAs were huge successes. As a result, they gained praises from critics and customers alike. Now, the company is steering the brand into a new direction, this time giving the Troll the RTA treatment.

The Wotofo Troll RTA is a 24mm tank atomizer. Technically speaking, it is a GTA (Genesis-style tank atomizer). This is because the build deck is floating in the middle of the tank and the wicks are peeking underneath it. There are a couple great thing about the Troll RTA. First, it is that it has the convenience of a regular RTA meaning the coils are continuously wicking. Second, it has the flavor production of an RDTA meaning the coils are closer to your mouth and the chimney section is narrow to concentrate flavor. With these features alone, the Troll RTA is starting to look like a viable contender for the best RTA of the year.

The Wotofo Troll RTA measures 24mm in diameter, and just 41mm tall from the base to the top of the drip tip. As a result, it makes it one of the smallest RTAs currently available. The Troll RTA is primarily made of stainless steel with a Pyrex glass tank and Peek insulators. The surprising thing about this atomizer is that although it is short. It can hold 5ml of e-juice; other taller RTAs can only hold up to 3ml. The Troll managed to keep itself small because the top fill ports. Also, the chimney section are press-fitted together, thus saving a lot of space.

Wotofo’s products are all high quality, which is quite surprising because they are also quite affordable. In fact, the Troll RTA is not an exception. All the threads are smooth. They went the extra mile to install stainless steel threading inside the Delrin top cap to make sure that it will last for a long time. Other manufacturers just machined the threads onto the Delrin. At the same time, they usually strip off when screwed improperly. In my opinion, the Troll RTA is one of the most beautifully designed RTAs I have come across. I can say I have seen quite a lot of atomizers.

For such a small RTA, the Troll has an immense amount of airflow. The dual bottom adjustable airflow, when fully opened, provides a wide-open lung hit. It comes with a bit of restrictiveness because of the small chimney. However, despite its size, the Troll can chuck a decent amount of clouds when you fully open the bottom airflow holes. If you want a more mouth-to-lung draw, you can close off the airflow ¾ of the way.

The Build Deck of the Troll RTA

To say that the build deck of the Wotofo Troll RTA is innovative is an understatement. Unlike the usual build decks that you can see in most RTAs and RDAs that have two postholes. Conversely, the Troll just has one build post situated in the center of the build deck. 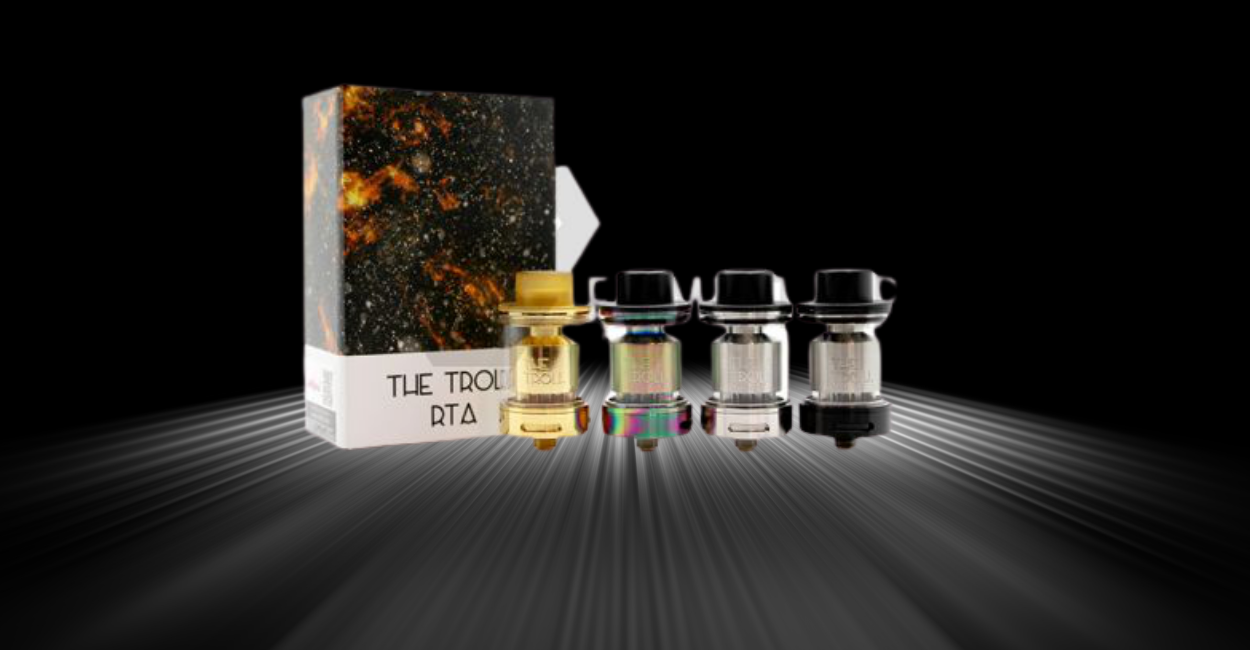 Looking closely at the build post, you will see that they made it from two blocks. The negative block is at the bottom and the positive block sits on top of it. Also, between them is a thick piece of PEEK insulation to prevent short circuits. Although the build deck of the Troll is quite weird, it is just like a Velocity build deck. One of your coil’s leads go into the top left hole and the other goes into the bottom right hole.

As mentioned earlier, the build post of the Wotofo Troll RTA is massive. In fact, it consumes most of the room in the build deck. Furthermore, Wotofo made it that way so it will further reduce the size of the chimney section. This reduced chamber and the conical design of the chimney concentrates the flavor of the vapors. As a result, this makes the Troll quite a formidable flavor-chasing atomizer. It is actually better at flavor-chasing than most of the RDAs I have used before.

The build deck on the Wotofo Troll RTA may look unusual. It just a Velocity-style build deck so I had no real problem building on it. However, just like the Velocity build deck, I had trouble with the side-mounted screws twisting wide coils. And other than that, installing coils on the Troll RTA is quite easy. I highly recommend the Troll for beginners at coil building because it is just that easy to use.

The Troll RTA only has four main parts. They are the top cap, the fill port and chimney section, the glass tank, and the base and build deck section. This means that the Troll RTA is easy to clean and maintain and you don’t have to keep a close eye on any small parts. The only gripe that I have with the Troll, and this is just a nitpicky thing. It is that when you remove the base section the glass tank stays in place with the help of a single O-ring. I haven’t experienced having the tank jiggle loose on me, but it is a definite possibility.

I have nothing but praise for the Troll RTA. The airflow is nice and smooth; no turbulence or any weird whistling sounds from the bottom airflow whatsoever. I also did not experience any leaking whatsoever. It is kind of a given with GTA atomizers because the wick ports are underneath the build deck. Therefore, the cotton will only wick the right amount of juice all the time. The biggest surprise of all about using the Troll RTA is the insane amounts of flavor that I get in my vape. It is the ultimate in flavor-chasing if you are asking for my opinion.

Once the build of the Wotofo Troll RTA is installed, you won’t have to worry about centering it. It’s easy to move it as far as you want. The deck has four post holes, however, the German peek insulator separates the coils, letting air reach both the coils readily. The chamber itself is small, which means you have dual coil option only.

The cotton should only be fluffed till the edge of the build deck, just above the airflow control holes. Make sure you don’t overstuff the channels. The cotton should only come out of the wicking channels after the reassembling of the tank. Once the wicks are embedded, you simply have to refill the atomizer, and it’s ready to use. The best part is that you won’t have to worry about dry hits, even if you are you vaped continuously at 80W.

You must first unscrew the drip tip assembly. You will see two kidney-shaped holes on both sides of the chimney. They are big enough to adjust a generous volume of juice, and they allow air to escape from the other side too.

If the only bad things you can say about an atomizer is the post screws and the drip tip choices then you can safely assume that it is an excellent device. Wotofo really outdid itself with the Troll RTA. First, it is user-friendly. Second, it has a nice low-profile design. Third, it holds a ton of juice. Fourth, it chucks clouds. Lastly, it delivers intense flavors. So far, the Wotofo Troll RTA is the best RTA that I have ever reviewed. Therefore, I highly recommend it to beginner and experienced vapers alike.

Are you interested in buying your own Wotofo Troll RTA? Then, I suggest that you do, we have provided a couple of links where you can get the best deals.