The OBS Engine RTA Review – Does it Purr or Does it Roar?

The mastermind behind this new engine is OBS technological company. The design and the quality of OBS Engine RTA are top-end, and it is also reasonably priced, retailing at about $29.99 per unit. If we were to say just one thing about this Atomizer, “OBS Technological Company designed it to minimize the risk of leaking by taking the conjoint airflow system out of the equation and replacing it with an ingenious top airflow system.” 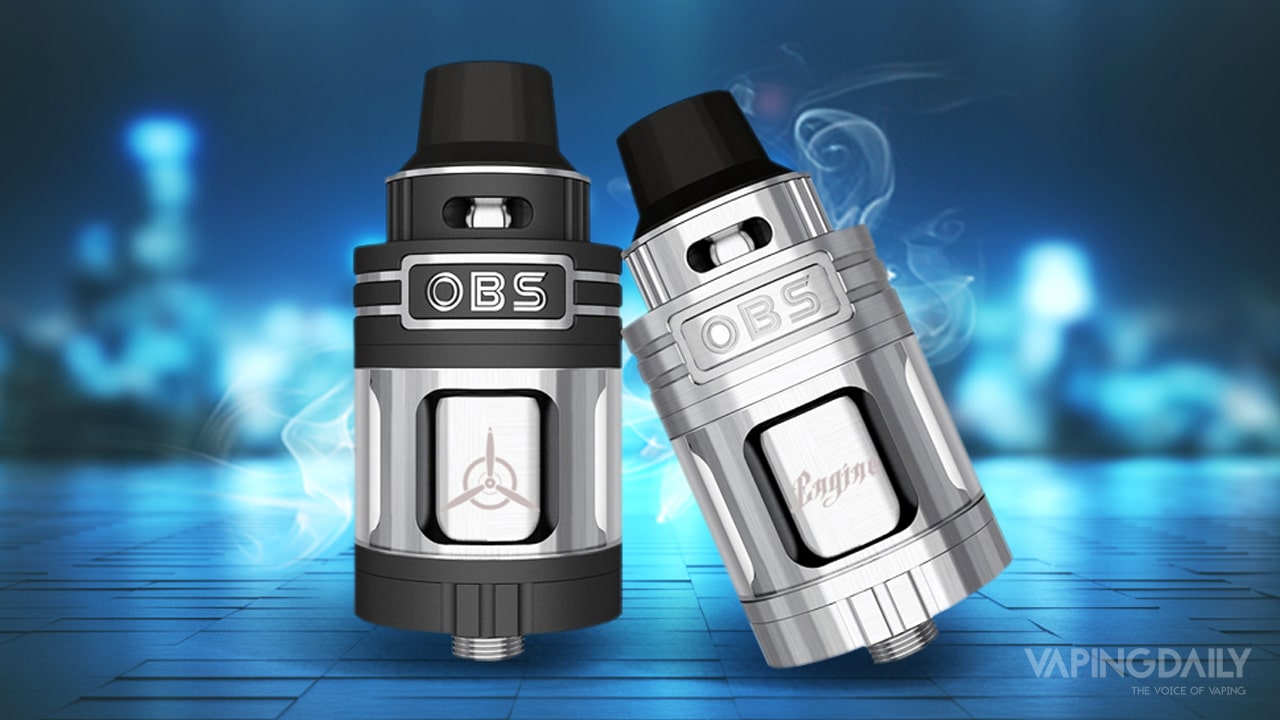 Another add-on includes an e-liquid engine capacity of 5.2ml that gives vapers more puffs compared to other tank atomizers within its price range and size. The OBS engine RTA is worth opening your pocket at $29.99, considering the immense benefits. All this sounds very appealing, but nothing is ever without some demerits. So, let’s highlight some of its pros and cons.

What is in the Kit?

Under the Hood of the OBS Engine RTA

Compared to the other 25mm RTAs from other companies, the OBS Engine actually has a lower profile. The diameter at the base of the Engine is 25mm, and it is just 50.8mm tall from the top of the atomizer to the base. This is including the Delrin drip tip. Although the Engine RTA is not as tall as the other currently available RTAs , it still has a respectable 5.2ml juice capacity. As a result, it means you will only be refilling your tank a couple of times for a day of normal vaping. 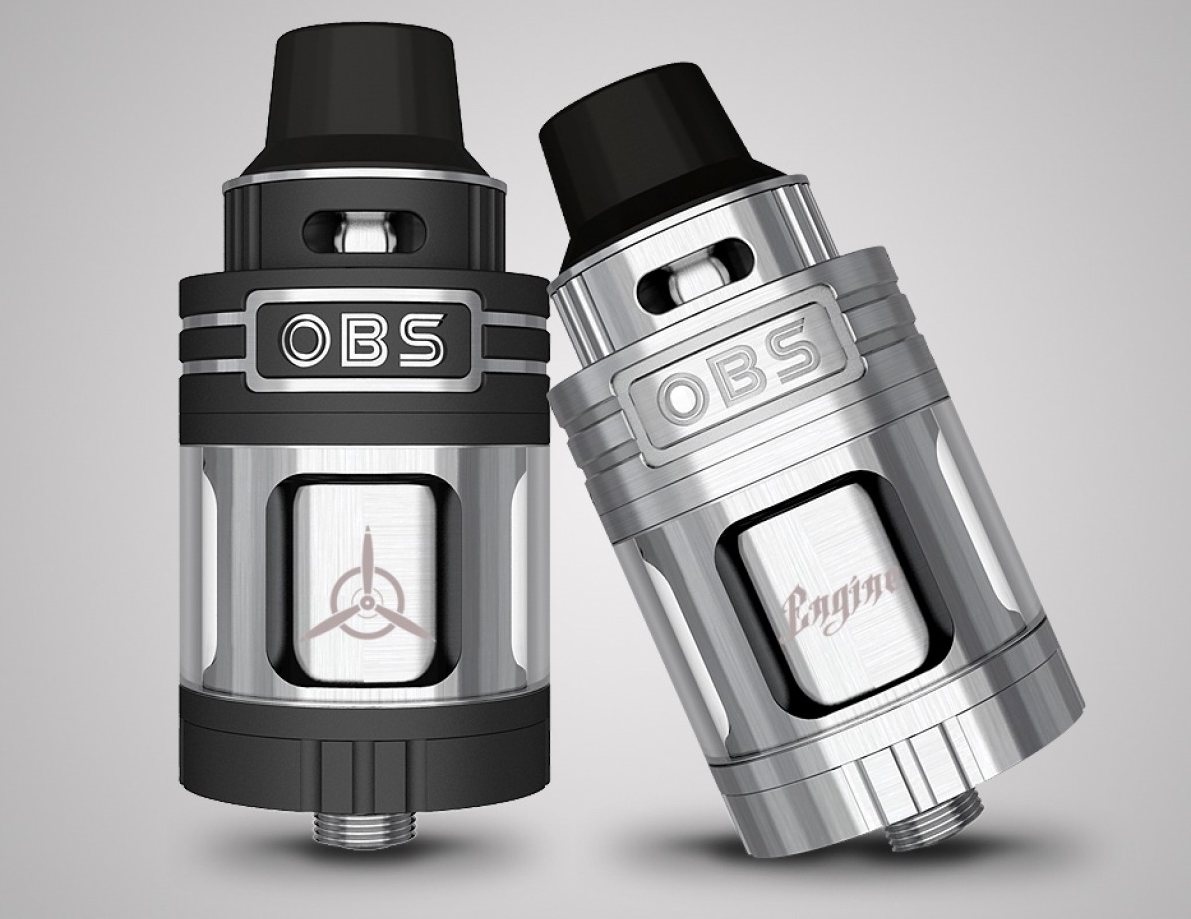 Because the Engine RTA is 25mm wide at the base, it might not sit flush on many single 18650 devices. For instance, if you use it on the eVic mini, there will be a slight overhang around the edges. However, if you have a dual 18650 mod like the Releaux RX2/3, the OBS Engine will fit perfectly flush on the device.

Sometimes, you will need to clean the tank or replace the glass tube. In this case, you only need to grab the Engine RTA by the base and at the top, and give it a bit of a twist. This will unscrew the metal “cage” that holds all of the parts together. The RTA disassembles into five separate parts. They are the base and the build deck, the glass tube, the metal cage, the top cap and chimney assembly, and the Delrin drip tip. One should not that you cannot disassemble the chimney assembly any further.

Unlike their previous RTA, the Crius, which has bottom airflow, the Engine RTA has top airflow. Just below the drip tip is the top airflow control ring with three slots. Air goes through the top, travels down along two chambers inside the chimney, and then goes out through two openings.

They are pointing directly to the top of your coils. Having the airflow entrance at the top also provides the additional benefit of keeping the drip tip cool. This is even when you are chain vaping.

At the bottom of the device is a gold plated 510 pin lead surrounded by a thick insulator to prevent short circuits. You may not use the OBS Engine RTA on a hybrid mechanical mod as the 510 pin does not protrude enough to make a safe connection. However, you should only use this atomizer on mods that have a standard 510 connection.

Diving down onto the build deck itself, the Engine RTA makes use of Velocity-style posts. This makes building on it extremely easy. As a result, even beginners can install their own coils on this RTA. The postholes are around 1.7mm in diameter, so you can actually use crazy thick wires like fused aliens or Claptons.

The build deck measures around 17mm wide, which is large enough to accommodate large diameter coils. Therefore, you might be able to fit 3mm coils in there, maybe even 3.5mm if you install it right at the center. However, the wicking holes for your cotton are set quite close together so they will limit the size of the coil you can use. I found that 5 to 6 loops using a standard Clapton wire fits perfectly.

When you look closely at the build deck, you will see two small notches along the edge. These notches are for catching the two small protrusions that are on the bottom edge of the chimney. This ingenious design is so the top airflow will always be perfectly aligned with the top of your coils.

Taking the Engine RTA for a Spin 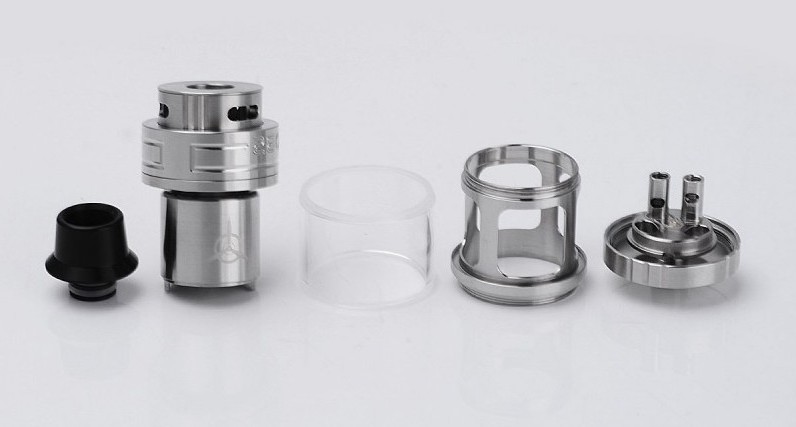 The OBS Engine RTA is probably one of the most user-friendly tank atomizers currently available. The Velocity-style posts on the build deck make coil installation simple and hassle free. This way, you don’t even have to bend the legs of the coils to center them on the deck. The juice flow holes are also quite wide so you will have no trouble stuffing your cotton wicks down them. In fact, I installed new coils and cotton wicks in less than five minutes.

In my opinion, one of the best features of the OBS Crius RTA was the top side fill port. It was easy to access, and it was not as messy as the filling methods used by other RTAs. Therefore, I was quite glad when I found that the Engine RTA used the same fill method. To fill up the tank with juice, you just need to look for the small teardrop-shaped symbol on the top cap. This is where you will find the fill hole. To access the fill hole, you just need to pull the top cap up.

The Engine RTA comes with a wide bore delrin drip tip, which is wider at the bottom and tapers towards the top. I actually liked the included drip tip. I also found it quite comfortable to use and it did not heat up even when I was chain vaping. However, you can use your own 510 compatible drip tips if you want to.

Another great feature of the Engine RTA is you can access the build deck without the need to disassemble the rest of the tank. This is great for when you need to change the cotton or the coils. In this case, you can do so without dumping out all of the remaining liquid in the tank. To do this, you just need to hold on to the base of the RTA and give it a twist.

In most cases, the flavor intensity of your vape will depend mostly on the build you use. However, the conical-shaped shroud and short chimney of the OBS Engine RTA does help concentrate the flavor even further. In fact, when I used the same build that I used on one of my RDAs, I got almost the same kind of flavor from the Engine RTA.

Regarding cloud production, the Engine RTA might not win cloud-chasing competitions. However, the amount of vapor that the Engine pumps out is nothing to scoff at. In fact, it can still chuck a respectable amount of dense clouds. 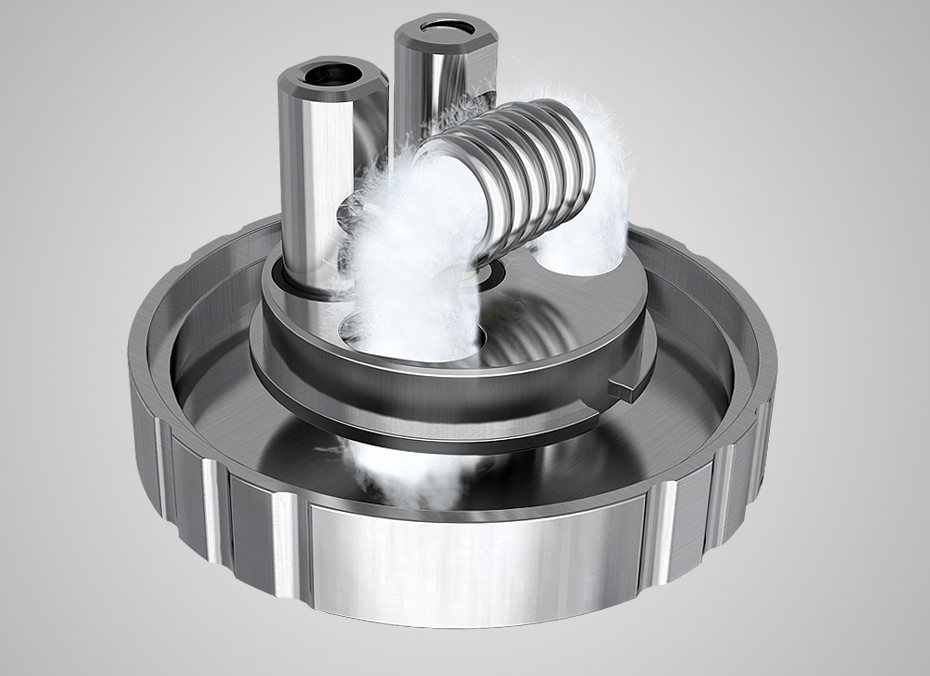 Pros and Cons of the OBS Engine RTA

The OBS Engine RTA has all the features and benefits that vapers are looking for in a tank atomizer. It’s almost the perfect RDA in my opinion. Firstly, it can hold a good amount of liquid. Second, it is easy to clean and maintain. Third, the build deck is simple, yet effective. Finally, it produces flavorful clouds.

As you can see, I really cannot find even a single thing that is wrong with this RTA. Therefore, I would gladly recommend that you try it out yourself. I guarantee that you will never regret buying this RTA.