Mini Ecig Insideout RTA by Chels68100
Disclosure: All the RTAs which we review on this website are tested by our trained, paid staff. As part of the review, VapingDaily.com links directly to the product or brands so that you may purchase directly from the provider. We receive commissions from these providers, however, this does not affect the price you pay, and the commissions we earn help us pay for the costs of running this website. Click here to learn more. Thank you.

Who is Chels? What are Mini ecigs?

During the early years of sub-ohm vaping, only a couple of companies made proper atomizers. One of them is a European company called Mini Ecigs. Between 2013 and 2015, Mini Ecigs had a bit of success from their line of mods and atomizers. For example, they had the Merkava and the Mini drip. In 2016, they tapped their most well-known modder, Chels, to come up with an atomizer that nobody has ever seen before. And that he did. As a result, now, we have the Mini Ecig InsideOut RTA.

Chels is a machinist by trade, but he is quite skilled at milling out stainless steel into different configurations. In addition, he is also famous for coming up with crazy atomizer designs. In 2016, Chels released the Insideout RTA, which is quite a weird RTA, and that is putting it bluntly.

Unlike other RTAs, the vapor travels between the sides of the tank (which he calls a juice capsule) and the actual body of the atomizer. This is before it goes out of the drip tip. According to Chels, this design gives a cold vape that “everyone loves”. This is kind of a misconception on his part, but to each his own, I guess. Now, is the InsideOut RTA a good atomizer to add to your collection? I seriously doubt it. Read on to find out why.

When you get the Mini Ecig InsideOut RTA that is all you will get. There are no spare O-rings. This is mainly because there is only one O-ring in total. You also don’t get extra post screws, and you don’t even get a drip tip. Don’t worry though because the InsideOut is 510 drip tip compatible.

The Look and Feel of the MiniEcig Insideout RTA by Chels 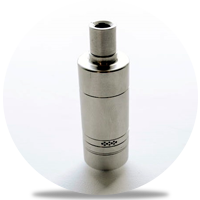 Looking at the InsideOut, it is definitely a nice-looking RTA. The machining on all the stainless steel components is immaculate. As a result, all the parts fit together perfectly. However, they hid the tank (juice capsule) inside the body of the atomizer. This means you cannot tell if you already need a refill.

As I mentioned earlier, the build quality of the Mini Ecig Insideout RTA is excellent. Chels really knows how to work his CNC machine. This is because all of the threads are smooth and all of the parts interlock perfectly. What’s surprising is that even though the only O-ring on the InsideOut is on the cap of the juice capsule. As a result, you will not experience any juice leaking ever.

This is a bit of a disappointment because the airflow holes are so small that you cannot get a wide open lung hit. However, they are also not so small that you can get a proper MTL draw as well. For what it’s worth, you can get a decent, restricted lung hit. One other thing that you need to know is that you have to disassemble the tank if you want to adjust the airflow. That means no airflow adjustment on the fly with this one.

The Build Deck of the Insideout RTA by Chels

Alright, this is where things get real messy. Considering that the Mini Ecig Insideout RTA came out in 2016, it still used an archaic build deck design. When you take the build deck out of the InsideOut, you will not see any build posts or clamps. In fact, the only things that you will see are four relatively large Philips head screws. Therefore, these are what you will be using to capture your leads.

By the time the Insideout came into the market, Velocity-style build decks were already gaining popularity. Also, there were also many popular atomizers that used at least a three-post design. I am still wondering why Chels still chose to use the old-school style of build decks. There are so many more convenient ones. This is definitely an atomizer for the more seasoned coil builders.

My Vaping Experience with the MiniEcig Insideout RTA by Chels

It takes a bit of skill and a lot of patience to build on the Mini Ecig InsideOut RTA. First, I had to bend my leads outward so they can reach the screws all while being careful not to mess up my coils. Secondly, you have to bend the ends of the leads around the screws to make them easier to capture. Finally, I could only build small, micro coils. The max is 2.5mm inner diameter and a maximum of five wraps of 24 gauge round wire. As a result, you cannot fit large coils in this atomizer. I have been building and installing coils for more than a year now. And the Insideout still poses quite a challenge.

You need to be careful when talking apart and cleaning the Insideout. It’s because it has eight different parts. Taking apart the atomizer is actually the easy part. However, when it comes time to reassemble it again that’s the hard part. You have to reassemble the tank in a specific order, which can get a little tedious at times.

Chel made the Mini Ecig Insideout RTA for a cool, flavorful vape. Conversely, that is not actually what many vapers want. It’s warm, but not burning hot. On another note, because the vapor is cool, the flavor of the vape was greatly muted, which is not satisfying at all.

Pros and Cons of the MiniEcig Insideout RTA by Chels

Final Thoughts on the Mini Ecig Insideout RTA by Chels

I really wanted to love the Mini Ecig InsideOut RTA by Chels. However, it is clearly not something that modern vapers would like. It would have been alright if they released it in 2013 or 2014, but it went into the market in the middle of 2016. By the time the Insideout became available, vapers were already using more advanced tanks. You have ones like the Griffin 25, Serpent Mini, Moonshot, and other more efficient atomizers. The Insideout looks and feels like an ancient relic. This is when you compared to the atomizers that came out last year. It also doesn’t help that it is quite expensive.

I do not recommend the Insideout for beginner vapers. It is because they geared it towards more experienced coil builders. On the other hand, I also don’t think most of them won’t even like using it. For that reason, it is just too fiddly and does not perform nearly as well as its contemporaries.

However, you might still want to give the Mini Ecig InsideOut RTA. Maybe it’s because for nostalgia’s sake or if you’re a fan of Chels. Then, we have provided a couple of links where you can get the best deals for them.

*be sure to turn on the subtitles for an English translation

May 25, 2017
The Smoant Mobula RTA is not your ordinary looking RTA. In this case, it is good. However, will its quirky appearance equate to a good vape? Let’s find out.

May 24, 2017
The IndeReserve RDTA is yet another collaboration between Wismec and Matt from Suck My Mod. Is this RDTA one for the best of the year? Let’s find out.