We’re kicking off the New Year here at vapingdaily.com with a new addition to the multi-battery box mod market, the Eleaf iStick Tria 300W mod accompanied by the Ello sub-ohm tank. 2017 saw the explosion of three-digit wattage devices that sought to go where few other devices have been, pushing wattages and power outputs to levels previously unseen.

And although the other Eleaf devices, like the BASAL and the Kiya, that I’ve reviewed lately were prominently scaled-down (to their advantage), more easier-to-use, and similar to starter kits for their performance and capabilities.

They’ve decided to stick with the always-reliable 18650 style of battery, three of them, and all of them removable rather than opting for the more powerful 21700 or 20700 variations.

Apart from being Eleaf’s first 300W device, there’s nothing else that distinguishes the Tria from the multiple other high-wattage devices out there. It comes paired with the Ello tank, which has also been a mainstay for Eleaf with a lot of their devices, most notably the previously most potent box mod from Eleaf the iKonn 220W.

When you receive your new Eleaf iStick Tria 300W kit, here’s what you’ll find inside:

The BASAL was a gorgeous, sophisticated portable mod; the Kiya was a tiny device also, but it had a wonderfully bright and playful user screen that made it a joy to vape with. On the other side of that coin, however, we have the iKuu and the iKonn, which were two similarly-looking devices that fell flat in many ways, like performance, functionality, and looks.

I think the Eleaf iStick Tria fits into the latter category. Because it takes three removable 18650 batteries, there’s a lot of girth to the box mod’s body that recalls a device like the Wismec Reuleaux Gen3.

Except, unlike the Reuleaux, the Tria has a more awkwardly organized interface. It is not three-sided but cubed in shape. The firing button is oddly placed and has no prominence whatsoever.

The whole operating interface on the Tria is spread out between two sides of the mod, and that was a poor choice on Eleaf’s part since it makes for an asymmetrical nightmare both function-wise and aesthetically speaking. I don’t know what it was that made the designers think that this was a good idea, but it does not work, at least for me.

The 0.91inch LED screen goes back to that dull, digital monochrome that the Kiya thankfully eschewed. The screen also displays all its information sideways, rather than top-down. Underneath the screen are two selector buttons, which are just above a USB charging/upgrade port.

The base of the mod is where you load your three 18650 batteries. There are a few battery ventilation holes drilled into the battery door, and the inside of the door features instructional markings like “+” and “-” signs. The top of the device features plenty of room to fit larger tanks, but nothing bigger than 25mm in diameter.

Given its tiny screen, there’s not much information that the startup screen on the Tria displays. Once you turn on the devices with five clicks of the firing button, the screen will neatly show you your wattage, coil resistance, amperage and three separate battery level indicators.

Three clicks of the firing button will bring you into the vaping outputs menu that offers the standard variable wattage, temperature control, and three TCR settings. With different button combinations, you can put the device into stealth mode and lock the keys.

You can access the secondary menu when you turn the device off and hold the power button and the “up” button. These menu options run the gamut from letting you set a preheat setting that powers up your coil before you start vaping and also allows you to switch the device to a reverse charging power bank.

You do, however, have to purchase a separate accessory to turn the Tria into a power bank. It looks like Eleaf decided to go back to the monotonous ten and twenty clicks to read the most superfluous variables like your board temperature and the version of your software.

Two sub-ohm coil options come with the Eleaf iStick Tria 300W, the brand new HW3, and HW4. The coils feature respectively, triple and quadruple coils, which have a lot of e-juice holes. The cylinders on the coils are also quite broad, so they are specially made for cloud chucking.

I’ve used the Ello tank before with the iKonn and the iKuu, and it was probably one of the only things I liked about either of those kits. The Ello tank has a simple, snap-back top fill system that is one of the most straightforward setups to use. The 510 drip tip is not interchangeable, unfortunately, and you can only use the drip tip provided.

I don’t remember if this option was available on the iKonn or the iKuu, but this version of the Ello comes with a spare glass tube and a chimney extension that can up your e-juice capacity from 2ml to 4ml.

I installed the tank extender before I started vaping with the device, and I left the HW3 coil inside the tank. The HW3 is vaped best between 50-130W, but I would imagine that the ideal range is somewhere between 70-90W so I started at that minimum, 70W and filled up my tank.

The taste quality was excellent at that power, and there was obviously a whole lot of cloud. The Tria was specially built to make clouds, and that capability was evident with every hit. To test out the mod’s power output, I swapped out the Ello tank for the Vaporesso Cascade tank that I reviewed a few days ago.

The GTM-8 coil was able to match the high-wattage output of the Tria, although they did not go all the way to 300W. I went to the 200W maximum on the GTM-8 coil, and I took a couple of very warm vapes that certainly did fog up the room, although flavor quality did take a hit.

I think one of the last high-wattage devices that I reviewed was the iJoy Captain X3 that also took three batteries and outputted a misleading 324W, compared to the Tria’s paltry 300W output. “Misleading” because you could note that it was not quite at 300W since the vapor quality didn’t quite reflect that high of a power output.

But, I think there are a lot more reasons why I prefer the iJoy Captain X3 over the iStick Tria. One of the many things I liked about the iJoy Captain X3 was its colorful and easily manageable user interface that had a big, bright, colorful front-facing and top-down OLED screen.

There was also a whole mess of add-ons and goodies that were included in the kit, like two coil options, a glass tube extender, 18650 battery adapters and most important of all, three 21700 batteries. And, regarding the internals of both devices, they are both similar up to the point where the iJoy Captain X3 had a custom curve option for its power output, which is something the iStick Tria 300W does not have.

So, for that customizable option, and for all the other reason I mentioned, I think the iJoy Captain X3 is the device to go with if you are looking for an extra-strength vaping experience.

The Ello tank may not look as sexy or alluring as the Vaporesso Cascade tank, but it is easily fillable, and the addition of the glass extender was a smart move for such a powerful, juice-killing mod.

These newly-designed sub-ohm coils were out for their first run, and they did not disappoint. The coils may not last you so long if you are vaping at extreme wattage levels, but they did last at least a week when vaping at two-digit levels. The coils were not taste-makers, per se, but they did output a noticeable flavor and texture.

The Tria is a solid, cloud-chasing device and if that’s what it was built for, then it accomplishes its task.

As of this writing, the Tria is available in six different colors, although none of them even come close to making the Tria attractive. The screen and buttons ungainly spread out to two sides accomplishes nothing looks-wise, although the Tria has no problems with grip or holding it.

The screen was uninspired and dull. It was extraordinarily tiny and did not reflect whatsoever the mod’s capabilities, which is strange since one of the best displays I’ve seen of late came from the iStick Kiya and that device only outputted 50W.

It’s troubling to see a vape company make some significant advancements and then fall back into monotony and mediocrity and with such a powerful device. The Eleaf iStick Tria is a clumsy attempt to compete with the other big boys in the high-wattage game.

And, if I can editorialize for a moment, where is the demand for high-wattage devices that vape companies are blindly acceding to? I don’t want a high-wattage device that can output 300W. Do you know how hot vapor gets when it is powered by 200W of power? Physically, it’s just uncomfortable.

But I suppose that there’s no other place to go but “up” since vape companies are having a hard time finding out how to distinguish their devices. Only, a higher-wattage device is not the answer.

I would not get the Eleaf iStick Tria mostly because I don’t vape anywhere near 200W, let alone 300W. The iStick Tria doesn’t have anything else going for it. It’s a weighty, very un-portable device that outputs as much vapor as those smoke stacks from the hydroelectric plant near my house.

And that’s not a good thing. 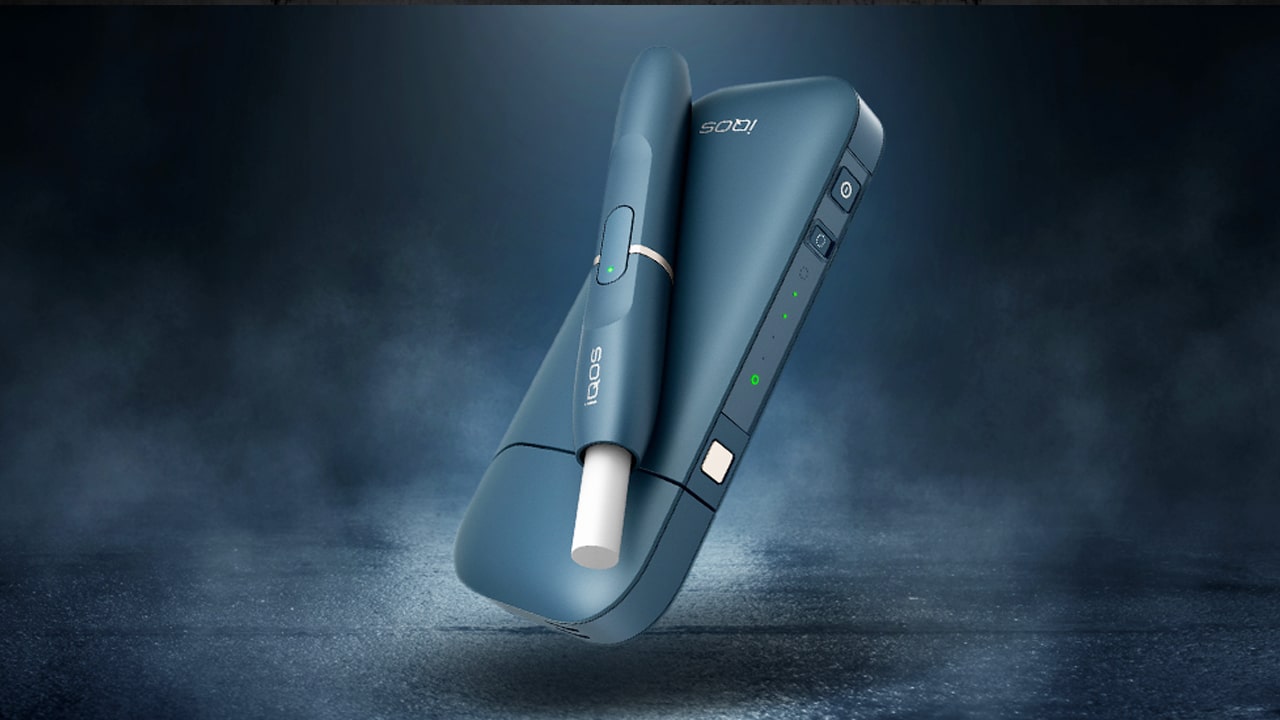 January 8, 2018
The IQOS from Philip Morris is the first tobacco heating system that uses leaf tobacco but heats instead of burning it to produce vapor. Read our review here

December 7, 2017
The Kimsun Smart 4R vape starter kit packs an 1100 mAh battery, and a 4ml tank in a device twice as small as other devices like it. Read our review here.