One of the factors that differentiates how tobacco smoke affects the body is gender. In addition to the effects of tobacco smoke that all people suffer from, women face additional female-specific complications, including problems with pregnancy, gynecological cancers, sexual dysfunction, heart and lung diseases, and even infertility.

Some recent world statistics on tobacco and female health:

The Surgeon General reported that more than two hundred thousand women die from smoking-related causes in the United States each year. While around 14% of the total female population smokes, this rate is higher in younger women, with approximately 19.2% of women ages 20 to 34 in Canada reporting that they smoke. Some experts believe that smoking is more prevalent in younger women due to exposure to external pressures such as marketing and social smoking.

The mortality rate associated with smoking has tripled in 50 years, and experts cite smoking as being responsible for a large proportion of deaths by cancer and heart disease.

One in four women die of heart disease in the United States, and some experts believe that smoking is a major contributor to these deaths. This theory becomes far more likely when considering the fact that many women receive regular exposure to secondhand smoke from partners, family, and friends. 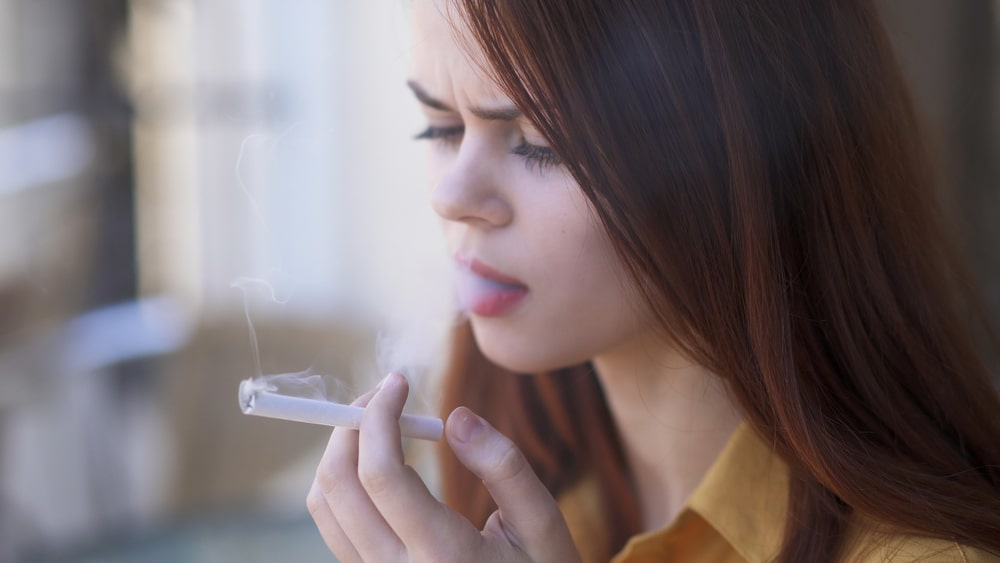 According to a 2016 Global Burden of Diseases report, more than twenty million women smoke in the United States alone. These women are disproportionately younger. They may also be differentially impacted by the effects of smoking when compared with men because of differences in anatomy and physiology between the sexes.

There are several disorders of the menstrual cycle and reproduction that are more common among smokers than non-smokers.

One of these is dysmenorrhea, which is painful menstruation. Some women may already experience pain or cramping with their menstrual cycle. However, it may become worse or more prolonged if they begin to smoke.

Even women who do not have menstrual pain may develop dysmenorrhea if they take up a smoking habit.

Another condition of the reproductive system that is far more common in female smokers is cervical dysplasia. This refers to the growth of abnormal precancerous cells on the cervix. Without prompt medical treatment, these cells can become cancerous. Though regular cervical screening can catch the growth of these cells, it is best to prevent them from occurring in the first place.

Women who struggle with infertility often receive counsel from doctors indicating that smoking may be an underlying culprit. As a 2017 study indicates, women who smoke are more likely to be infertile than those who do not smoke. For this reason, doctors often advise couples to quit smoking before trying to conceive. Smoking can affect both the viability of eggs and the motility of sperm.

There are various sexual dysfunctions that medical experts associate with people who smoke. One of these is delayed orgasm in women. This is when a woman who smokes is not able to orgasm within her usual time frame. It may also refer to the inability to orgasm at all. Both situations are often very frustrating for those who experience them.

A study conducted by the Harran University School of Medicine in Turkey found that one reason female smokers experience sexual dysfunction is the negative effect of nicotine on the vascular system:

Smoking results in a strong constriction in the endothelial tissue of the blood vessels. This is why smoking causes high blood pressure. It also results in decreased blood flow to the sexual organs and has a strong negative impact of the levels of sex hormones circulating in the blood.

Whether male or female, smoking has a detrimental effect on a person’s heart. However, the World Health Organization notes that the incidence of coronary heart disease is higher in women who smoke than those who do not. This includes angina as well as myocardial infarction, more commonly known as a heart attack. Smoking increases blood pressure and the amount of plaque that accumulates in the blood vessels. Vaping may cause this too if the e-liquid used contains nicotine.

Women who smoke are also at greater risk of having an ischemic stroke than are women who do not smoke. This occurs when a blood clot lodges in a blood vessel in the brain, causing brain cells to lose access to oxygen. It occurs more often in smokers because smoking increases blood pressure. This, in turn, increases the risk of clot formation.

COPD is one of the respiratory conditions most strongly associated with smoking. The term refers to both chronic bronchitis and emphysema. Chronic bronchitis is a persistent irritation of the bronchi, the tubes that connect the lungs to the mouth. The bronchi become red and inflamed. This can result in a chronic productive cough and increased mucus production.

Emphysema is a condition where the air sacs in the lungs slowly become destroyed. In emphysema, air is not able to flow in and out of the lungs effectively. This makes it difficult to breathe and makes a person feel short of breath even at rest. It can result in oxygen dependence. 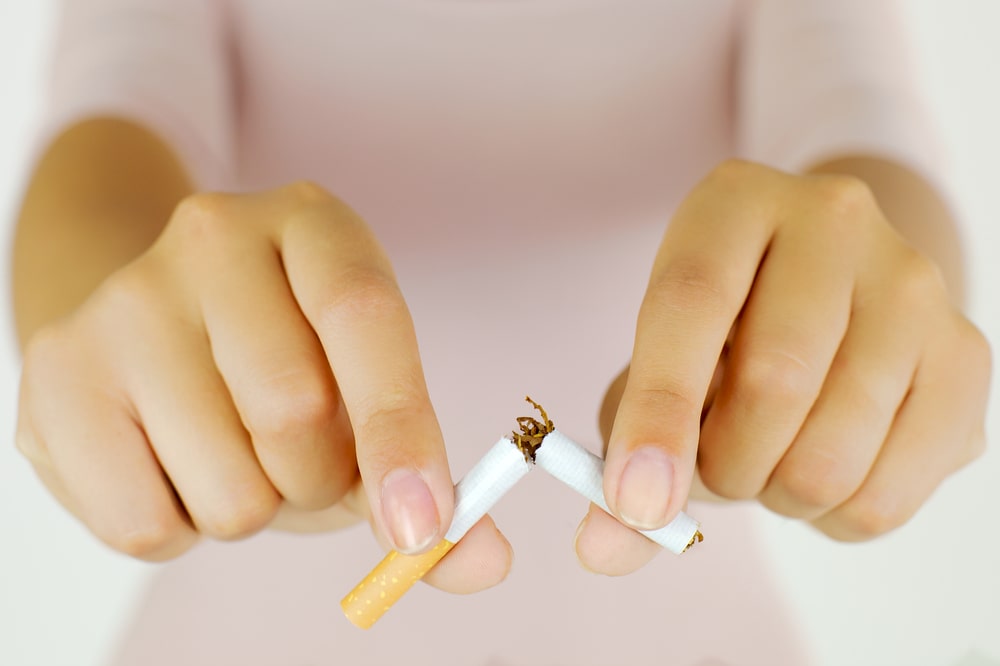 The World Health Organization observed that the effects of smoking are especially deleterious on the bones and skeleton in women. Women already have increased rates of low bone density and higher fracture risk. These risks are even greater in women who smoke. Women who smoke are especially vulnerable to hip fractures, though there is an increased risk of other fracture sites as well.

The cancer risk associated with smoking is well-known. Lung cancer is far more common in female smokers than non-smokers. Lung cancer in smokers is the result of breathing carcinogens directly into the lung tissue.

According to the Centers for Disease Control and Prevention (CDC), 80-90% of lung cancer deaths may correlate directly to smoking.

Smoking causes other cancers as well. There is increasing evidence that many cases of breast cancer occur due to smoking. This is especially true of breast cancers that occur before menopause. Breast cancer is among the most common cancers in women, and there are higher breast cancer rates found in places where people smoke more.

According to the CDC, both smoking and vaping during a pregnancy can cause harm to the health of the mother and the development of the growing fetus. The risk of miscarriage is greater in women who smoke than in women who do not smoke. Furthermore, women who smoke have a more difficult time getting pregnant in the first place and may have difficulty conceiving after a miscarriage.

Smoking shows some association to difficulties with breastfeeding as well. Many women have shown concern about exposing their infant to nicotine through breast milk. Babies who breastfeed from a smoking mother have shorter sleep durations. These altered sleep patterns can also have a negative impact on mother-baby bonding in some cases. 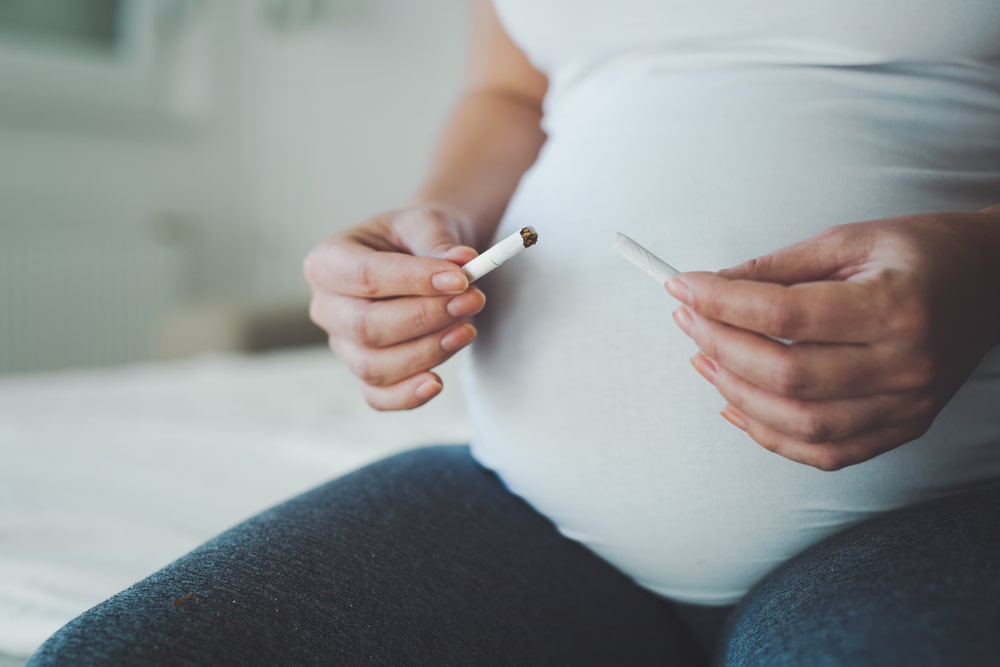 Exposure to smoke from tobacco products impacts all aspects of fetal development. The carcinogens in tobacco smoke can negatively impact cell growth and division. From impaired cell division in brain development to problems with the heart and lungs, there are many ways in which babies born to smoking mothers are put at a disadvantage.

Babies born to mothers who smoke have a lower birth weight than other babies. Oftentimes, babies born prematurely or underweight cannot breathe without assistance and require a stay in an intensive care unit where they can receive mechanical ventilation. These babies are also more likely to have breathing problems, such as asthma, as adults.

The fetus of a smoking mother is smaller and lighter than the fetus of a non-smoking mother. This is partially because blood flow becomes restricted from the placenta, which causes the fetus to receive less of the nutrients and oxygen that facilitate healthy growth.

Other birth defects attributed to tobacco use

Sudden infant death syndrome (SIDS) refers to the sudden and unexplained death of an infant while sleeping. A great deal of research has associated SIDS with smoking. The more exposure the infant receives to smoking in utero, the greater the risk of SIDS. Experts think that more than a third of SIDS cases were preventable through smoking cessation.

How to quit tobacco for women

There are many tips that can help women quit using tobacco for good. The first and most important thing is to find a supportive social network of non-smokers or former smokers who can support the smoker in their quest to stop smoking. It is especially helpful to have someone to talk to when having cravings.

There are also medications to help control cravings. Nicotine replacement patches, lozenges, and gums can help with this. Smokers who think they would like to stop smoking should talk to their doctor about medications that can help them.

Using healthy methods for coping with stress is another important skill to develop while trying to quit smoking. This may include talking with a friend, doing yoga or meditation, or working with a counselor to develop healthy coping skills.

Weight management can also help improve overall health and help channel energies as smokers learn how to overcome their addiction. Women who are at a healthy weight and do not smoke have the highest positive health outcomes. 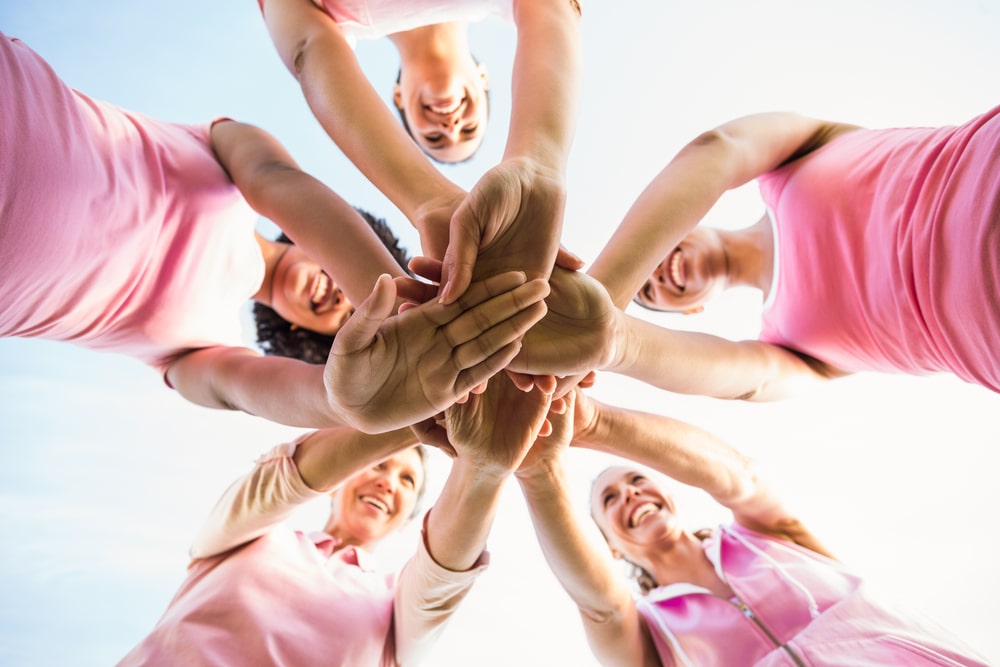 Enjoy the benefits of quitting

Quitting smoking confers a wide range of physical, mental, and social benefits to women who can stop smoking for good. After quitting individuals benefit from being less likely to get cancer, become affected by COPD, have a heart attack, or suffer a stroke. When a woman wants to become pregnant, her baby should be healthier and less likely to suffer from debilitating health issues if she stops smoking. Quitting the habit also lets her live a longer, healthier life surrounded by the people she loves.