A Reach Like No Other: Racial Minorities and Smoking

Tobacco companies embraced racial and ethnic minorities as potential customers before anyone else. Other industries shunned marketing to African-American, Latino and indigenous peoples. Only, this recognition from Big Tobacco was not benevolent. The consequences of tobacco companies advertising to minorities had, and continues to have, serious and far-reaching consequences; many of which are still felt today.

Tobacco companies used targeted ads, sponsored major cultural events, and spent huge amounts of money advertising to minority groups to create loyal customers among them. One example of targeted advertising is the way menthol-brand cigarettes were marketed to African-Americans more than whites.

88.5% of African-American smokers smoke menthol cigarettes as a result of targeted marketing. Experts have noted that menthol cigarettes are more addictive than regular cigarettes. They make cigarette smoke smoother to inhale, which means lung cancer deaths have gone up among black males while remaining the same for white men.

This kind of race-based marketing is one of the tactics Big Tobacco employs to maintain a customer base in black, Latino, and working-class communities all across the United States. Native and Asian Americans have also fallen prey to Big Tobacco public relations strategies.

This article will explore all the ways cigarette makers found to target vulnerable communities, which differed from the ways they advertised to white smokers. And how when people wanted to quit smoking they found it difficult due to a lack of support and resources.

Companies like Lorillard found that the best way for cigarette ads to reach African-Americans was through buying space in magazine spreads. The ads were placed in black-centered publications like Ebony and Negro’s Digest. Different ads for white audiences were featured in mainstream magazines like Vogue and Vanity Fair.

Advertising in these black-majority magazines was important. The tobacco companies could directly target black audiences without offending their white customers. Their ads could also feature black models making them more effective and appealing.

With the emergence of the Civil Rights’ Movement in the 60s and 70s, tobacco companies evolved their ads to reflect the times. Not only that, but companies like Philip Morris, and Brown and Williamson, started to exploit black pride and nationalism.

In this era, ads featured symbols of those movements: dark-skinned models, Afros, and “soul style.” Beyond targeted marketing, Big Tobacco also began cultivating cultural ties to the African-American community starting in the 1960s.

Internal memos from 1995 reveal how tobacco companies made donations to such organizations as the NAACP (National Association for the Advancement of Colored Peoples), the King Center, and the Cuban American National Council, which were not considered charitable donations but necessary expenditures for “Minority Advertising.” 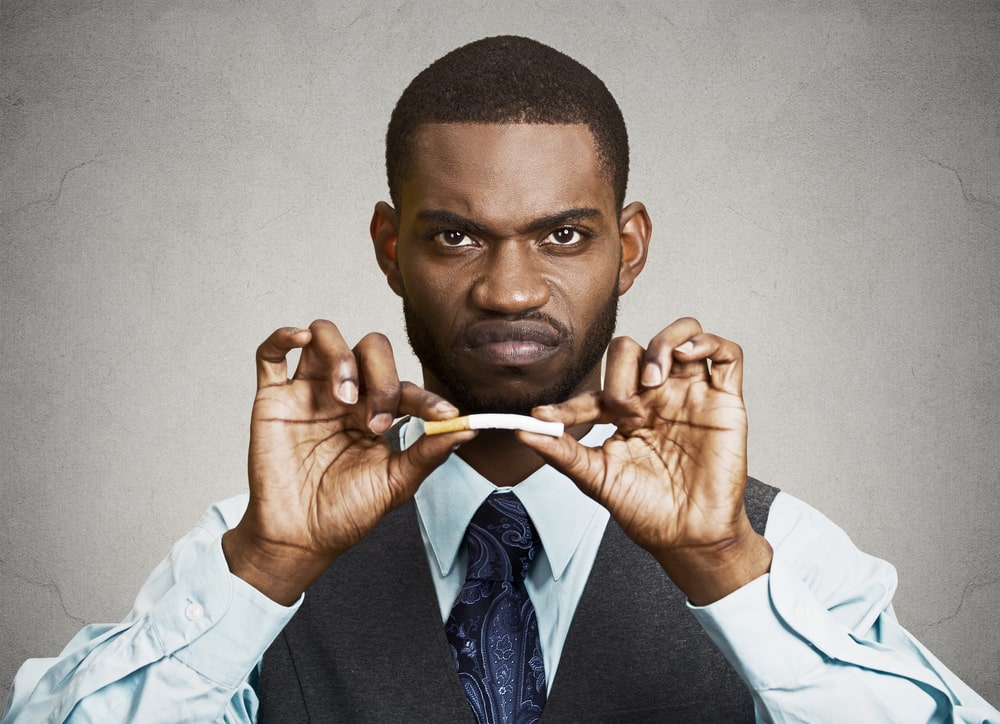 In this era, ads featured symbols of those movements: dark-skinned models, Afros, and “soul style.” Beyond targeted marketing, Big Tobacco also began cultivating cultural ties to the African-American community starting in the 1960s.

Internal memos from 1995 reveal how tobacco companies made donations to such organizations as the NAACP (National Association for the Advancement of Colored Peoples), the King Center, and the Cuban American National Council, which were not considered charitable donations but necessary expenditures for “Minority Advertising.”

The Consequences of “Minority Advertising”

Spending on “minority advertising” has paid off for cigarette companies. Lorillard and British American Tobacco both increased their advertising budgets for their respective brands of menthol cigarettes in the late 1960s. They also both targeted African Americans.

African Americans make up the majority of menthol-cigarette smokers, more so than white Americans.

Big Tobacco advertising has had real, and dire consequences for the affected minorities though:

Despite differences among races and cultures, tobacco company executives repeated the same strategies they used on African Americans on other ethnic groups, as will be seen in the following sections.

Tobacco companies identified the Latino market as an important one all the way back in the 1980s. They employed similar tactics (magazine print ads) as they did with the African American demographic with a few slight changes.

When a traditional, adult-oriented R.J. Reynolds (RJR) campaign failed to gain traction, RJR switched gears and aimed for a younger, more dynamic market with their “Kool Be True” campaign.

They sponsored concerts and created ads with young, attractive, racially-mixed models. Borrowing a page from previous interactions with the African American community, tobacco companies like Philip Morris and RJR started throwing money around in other ways as well. 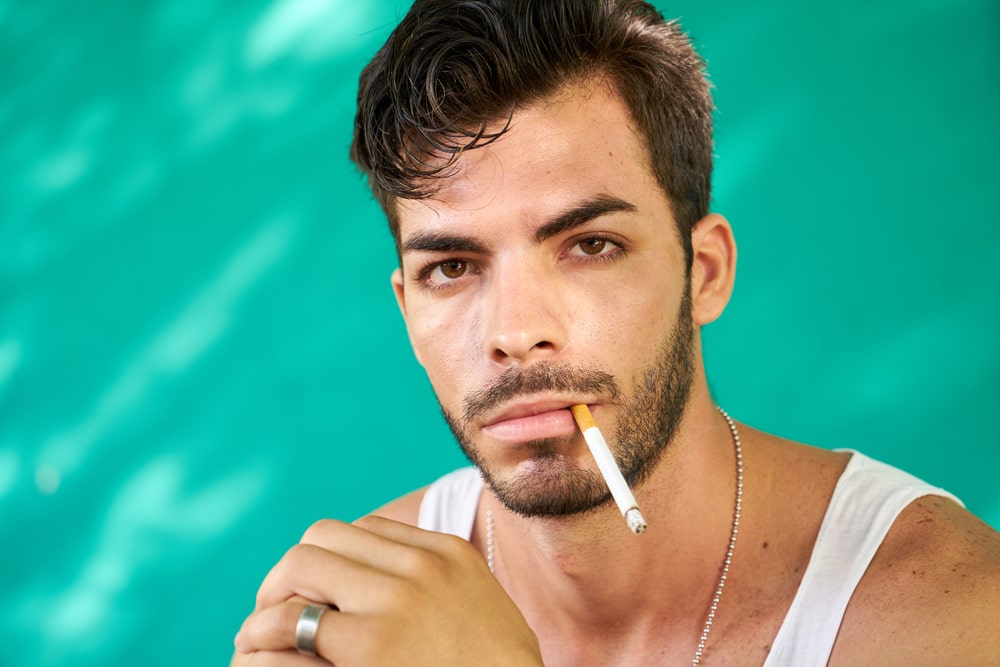 Unlike with the African American community, the tobacco companies did not only seek to soften and improve their image among Latinos through generous cash donations. Their contributions proved beneficial for other reasons as well.

The Hispanic market did present problems for tobacco advertisers because of the diversity inherent within the community. Hispanics are not a monolithic ethnicity. There are significant national, cultural and regional differences among them.

A NIHS survey broke down smoking rates among Hispanics by nationality to find which group smokes the most:

There were even more disparities between US-born Hispanics, and non-US born Hispanics, with the former smoking less than the latter. Tobacco advertisers realized these nuances between different nationalities and changed their strategy accordingly.

A memo from the Leo Burnett Agency, the PR firm working for Philip Morris said as much:

As a result of these differences, regional marketing activities, based upon both the Spanish cultural heritage and the local environment, may be more effective in reaching Hispanic smokers than a national program.

The advertisers also determined that a Hispanic immigrants’ time living in the US, or being “assimilated” to American culture, decided their brand preference. With these findings, Big Tobacco targeted non-assimilated communities with a specific type of ad.

One example is R.J. Reynolds’ “Nuestra Gente” campaign, which emphasized:

In areas with high concentrations of assimilated migrants ads like the “Un Tipo Suave” and “Kool Be True” campaigns proved more effective than in regions with non-assimilated migrants. These ads reflected more youth-oriented values like the importance of image, fitting in, and achieving status. 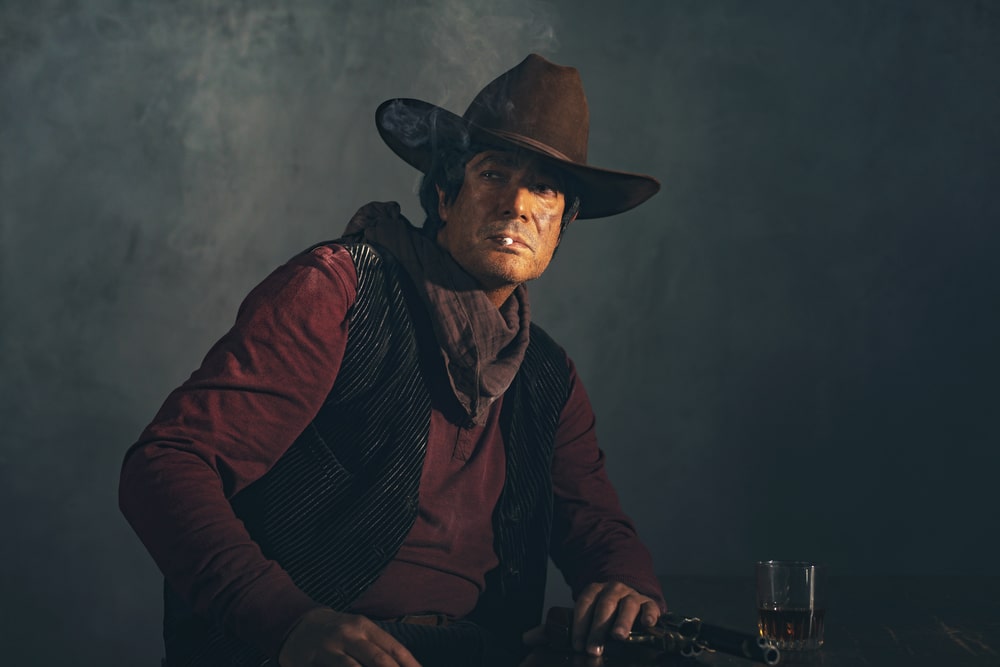 Hispanic immigrant groups, long-term and the newly arrived, also viewed smoking as a very “American” thing to do, which is something that ultimately helped the tobacco companies. In interviews done with researchers from the John Hopkins Bloomberg School of Public Health, many young migrants said that:

Consequences of Being Valuable

Tobacco companies sought to learn everything they could about Hispanic buying patterns because marketing research has shown that Hispanic consumers are:

Hispanics also have a lower socioeconomic status than other racial groups in the US. They have less access to quality healthcare and do not have the same resources to quit smoking as whites.

For example, only 50% of Hispanics received smoking cessation advice from their physician, compared to 72% of whites who received the same information. It is no wonder then that:

Asian Americans went little noticed, as the tobacco companies were finding out everything they could about the African American and Latino market in the US. Recently, more has become known about the marketing practices of Big Tobacco in the Asian American market.

Like with other racial and ethnic groups, Big Tobacco saw potential in the Asian American market. Big Tobacco’s market research into the beliefs and values of Asian American households revealed similar themes as with Latinos, which were a firm belief in:

Acculturation and “fitting in” with mainstream white American culture were also important influences on Asian American smoking behavior. There were barriers to reaching the Asian American market, which was also revealed in early research.

Cultural and language diversity were considered significant obstacles. Asian Americans comprise over thirty different ethnic and cultural groups, not all of them sharing the same language and customs. To build rapport with the Asian market, the tobacco companies took a more business-oriented approach. 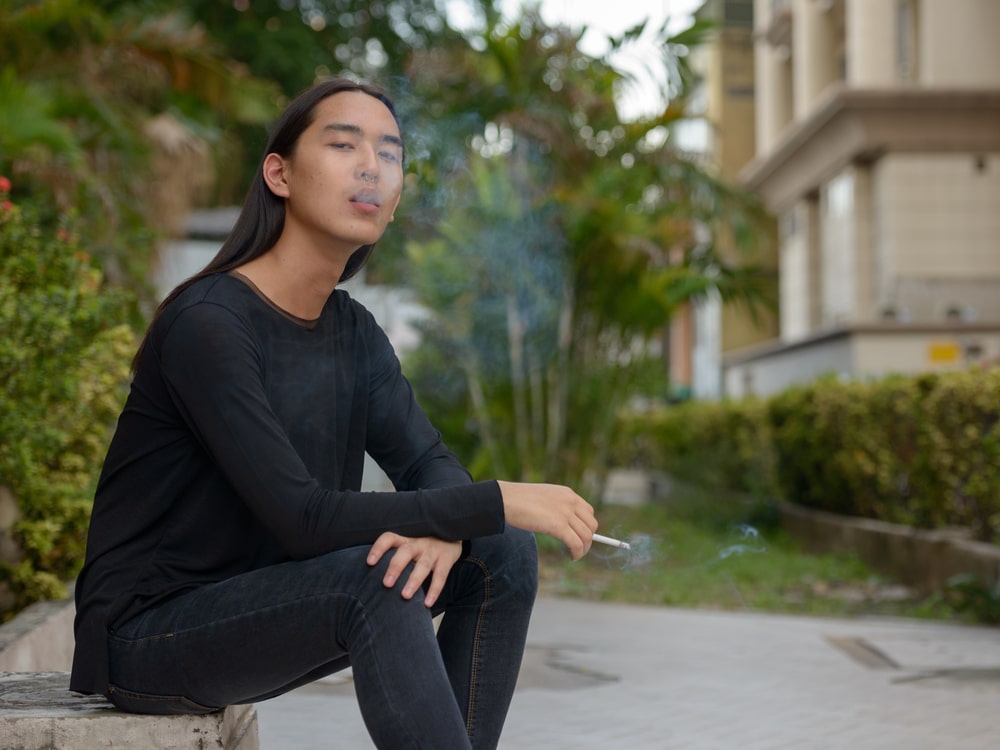 They sought to build ties with the Asian small business community to make headway with Asian American consumers. Philip Morris offered free lighters and ashtrays with the purchase of tobacco products during Chinese New Year.

At least in the United States, the tobacco companies efforts to sway Asian Americans to smoke have not met with success. Asian Americans have the lowest prevalence of smokers (16.9%) among all other ethnic groups, including African-Americans (26.7%), Latinos (20.4%), and Native Alaskans and American Indians (34.1%).

There are higher prevalences of smoking within the Asian community though. Laotians and Cambodians are among the highest at 72% and 71%, respectively. These higher incidences among Southeast Asians may have to do with the lack of tobacco control in these parts of the world.

Tobacco advertising faces no restrictions in countries like Indonesia, Laos, and the Philippines. As a result, 63% of Indonesian men smoke, and more women have started to smoke as well, with unrestricted tobacco advertising to blame.

Health-wise, lung cancer, heart disease, and stroke are all leading causes of death among the Asian population. While smoking is a cause of all three illnesses, it is not clear whether cigarette smoking is the reason for such high incidences of all three diseases.

The American Indian and Alaskan Natives population of the United States have also been targeted by culturally-specific tobacco advertising. The results of this specific targeting include:

Marketing cigarettes to Native peoples proved less challenging for tobacco companies since many tribes use tobacco in cultural and religious ceremonies. This ceremonial tobacco is different from cigarette tobacco, but that did not stop cigarette makers from exploiting the connection.

Brands like American Spirit did not shy away from using traditional American Indian symbols like a pipe to market their products to Natives. Tobacco companies took the familiar route of sponsoring American Indian cultural events. They also gave directly to American Indian non-profit groups to gain favor with Native Americans.

Lower taxes and a lack of tobacco control on tribal lands has also contributed to higher smoking rates for American Indians and Alaskan Natives. Not to mention the fact that Natives have less access to health care, and smoking cessation aids, which makes it harder for them to quit. 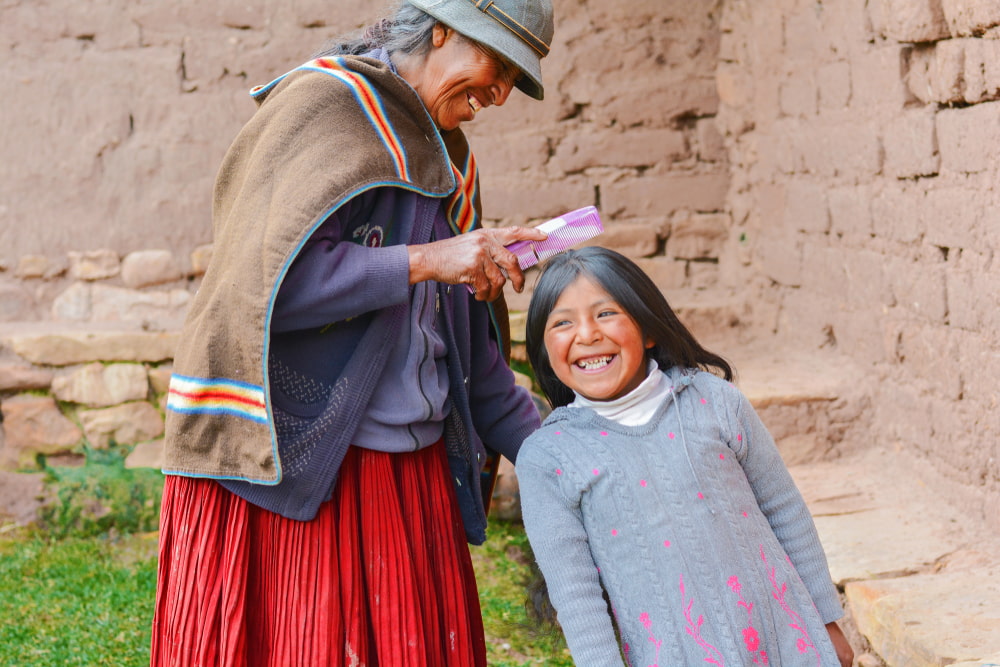 There is no doubt that tobacco companies and their PR firms used sophisticated marketing techniques to craft culturally-specific ads to use on minority populations. The pattern repeated itself with each group, from African-American to American Indian and Alaskan Natives.

Kathleen Culliton, a civil rights attorney, made the case that this kind of targeted advertising is a form of discrimination. In the case of tobacco advertising to the Latino community, she says that:

Tobacco advertising may be exploiting Latino cultural images and using negative stereotypes in their marketing of addictive behaviors and substances.

Since young Latinos are exposed to more ads than their white counterparts, the discrimination comes in the burden smoking has on Latino communities who already have poor access to healthcare.

The act of targeting Latino communities leads to predictable health damages that are troubling from a Latino civil rights perspective, as the Latino community has not been fully included in tobacco control measures.

Advertising cigarettes on television is illegal. Tobacco companies still run ads in print magazines, billboards, and through in-store promotions, as well as in bars and nightclubs. One study found that cigarettes are more heavily advertised in poorer neighborhoods than in wealthier areas.

Prohibiting targeted minority advertising is complicated due to the First Amendment, which protects free speech in the US. Cases are going through the courts arguing that this type of advertising is a form of discrimination, which would then prohibit it, but none have met with any success.

Until minority advertising is seen as harmful to public health, minority groups can continue to fight for more access to smoking cessation services. They can also lobby for more healthcare and fairer treatment from healthcare providers.