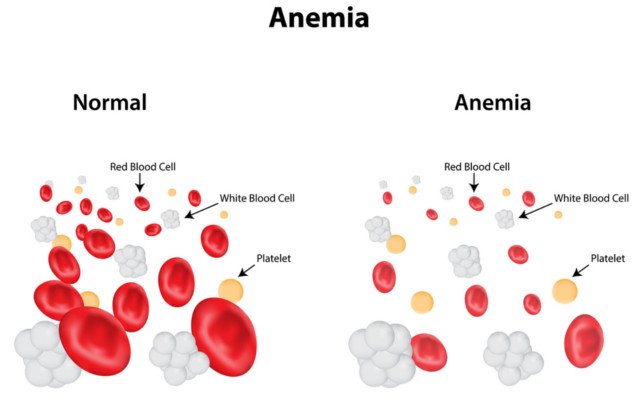 When a person smokes, thousands of harmful chemicals enter the lungs. These chemicals are absorbed into the blood and carried over to the different parts of the body. Obviously, the blood is one of the first things to have close contact with such toxic chemicals and byproducts of cigarette smoking. The links that tie smoking and anemia together have long been proven, such that anyone who lets more than 7000 cigarette smoking offshoots into his or her body has a higher risk of acquiring anemia.

Certain studies show that the decrease in hemoglobin levels in a smoker’s blood is compensated by the higher red blood cell production caused by carbon monoxide called Polycythemia. However, the numerous studies that link smoking to anemia are more than enough, with smokers experiencing different symptoms of the condition.

Anemia is an abnormal condition of the blood showed by low levels of hemoglobin, red blood cells, or hematocrit. These three blood parameters define the effectiveness of the blood in carrying sufficient oxygen to different body tissues. As a direct result of the decrease in the number of any or all of the three, the blood becomes less capable of performing its functions.
There are different types of anemia that smokers may acquire. Each type is set apart by the underlying cause and showed by symptoms that may be unique to each one.

This type of anemia is caused by the insufficient production of the alpha and beta globins—protein chains that make up the hemoglobin. Because of this, the blood becomes improperly formed and does not carry sufficient oxygen to the different parts of the body.

In general, thalassemia is genetically acquired or caused by altered genes that are passed on from the parent carrier. To treat the condition, thalassemia patients are given vitamin supplements such as folic acid and vitamin C. Severe thalassemia is cured by iron chelation therapy o and blood transfusions, depending on the case.

Pernicious anemia, on the other hand, is due to the lack of vitamin B12 that is absorbed by the body. This may be caused by a poor diet or the absence of or insufficiency of a protein that is responsible for absorbing enough vitamin B12 to the body. Some people have bacteria or tapeworm infection in the small intestines that interfere with the absorption of the said vitamins.

Anyone who has pernicious anemia experiences the common symptoms of anemia, which are lightheadedness, fatigue, pale skin, and lack of energy. When untreated and allowed to worsen, pernicious anemia may lead to neurological conditions such as dementia, anxiety, depression, confusion, memory loss, and nerve damage. It can also result in digestive problems like vomiting, bloating, heartburn, diarrhea or constipation, weight loss, and appetite loss. This type of anemia causes unusual tremors and reflexes in babies.

Caused by the early destruction of red blood cells before the bone marrow produces enough replacement, hemolytic anemia may either be inherited or acquired. There are many types of hemolytic anemia, with symptoms such as abdominal pain, jaundice, leg pain and ulcers, dizziness, shortness of breath, pale skin, chest pain, and cold hands and feet.

This type of the condition is caused by the inability of the bone marrow to create sufficient red blood cells regularly. Aplastic anemia is uncommon. However, it is a very serious illness that should be treated immediately. Otherwise, it may lead to heart enlargement, heart failure, bleeding, and infections.

In most cases, the cause of the condition is unknown. Nonetheless, it is clear that bone marrow damage, which disables the marrow to function normally, is behind aplastic anemia. According to studies, some acquired cases involve exposure to radiation, chemotherapy, toxic chemicals, being infected with certain diseases such as Epstein-Barr, hepatitis, parvovirus B19, HIV, and cytomegalovirus. Autoimmune conditions like rheumatoid arthritis and lupus are also preconditions for aplastic anemia.

Fanconi anemia is a type of aplastic anemia that is inherited. This blood disorder is a rare and serious condition that leads to bone marrow failure and affects other organs in the body. People who have FA live for 20-30 years, with deaths linked to bone marrow failure, tumors, and leukemia.

Iron deficiency anemia, on the other hand, is commonly caused by chronic bleeding, such as in excessive menstruation, or pregnancy, growth spurts in children, and low iron consumption. Gastritis, peptic ulcers, hemorrhoids, or worm infestation may also cause internal bleeding within the digestive system, which is a precursor for iron-deficiency anemia.

With sickle cell anemia, the body produces abnormally shaped red blood cells due to irregular hemoglobin that is difficult to carry throughout the body. Sickle cells tend to block the blood vessels and eventually lead to infections, pain, organ damage, and death.

How does smoking lead to anemia?

There are many ways by which smoking cigarettes leads to particular types of anemia, including, but not limited to, the following:

Smoking decreases your appetite, which may lead to low iron and vitamin C consumption. On the other hand, smoking makes caffeine, alcohol, and other unhealthy food taste good, thus increasing intake and introduction of such substances into the body.

People who have anemia or do not want to develop anemia should stop smoking at the earliest possible time. A combination of professional advice and help, as well as a personal resolve to cut the habit will make it easier to maintain a healthier circulatory system.

2 comments on “Smoking and Anemia: How the Habit Affects Your Blood”