What Is a Vape Detector? Everything You Need to Know

Not everyone is thrilled with vaping.

School administrators see it as the bane of their existence because many teens clandestinely vape on campus.

School zones are supposed to be vape-free, but it has been tough to enforce these bans until now. However, with the advent of the vape detector, teachers and administrators may finally have an effective tool to help them combat teen vaping.

Why and Who May Use a Vape Detector?

School zones are not the only places where vaping is banned, however. Vaping has been banned in public eating areas (bars, restaurants, cafes), workplaces, and other enclosed places. As a general rule, if four walls surround the place, it is not a good idea to vape there.

That feeling when the home security company calls you because your husband was vaping his damn cotton candy flavor in the house and set off the smoke detector after you’ve told him not to do that after the last time… pic.twitter.com/7TGtRiFpcP

An excellent example of these bans in action is in Ohio. Vaping there has been prohibited in all places where smoking is banned. Countless states have enacted similar bans and use vape detectors to enforce them, including a school district in Charleston County, South Carolina.

Anyone who wants to prevent vaping can buy these devices. This includes business owners, school administrators, and anyone responsible for property in a state where indoor vaping is banned.

There are several benefits to buying a vape detector, such as preventing teen vaping and improving air quality.

Teen vaping has been a considerable problem since e-cigarettes first hit the market. 3 million high school and middle school students have tried vaping or smoking in the last year alone, according to the It’s Your Life Foundation. Vape detectors could be the tool teachers and school administrators need to handle this problem.

BAD POLICIES // TEEN VAPING
Schools are installing "vape detector systems" with just one of the sensors costing nearly $1,600. However, they are likely a waste of money, because administrators clearly failed to educate themselves about "stealth vaping."https://t.co/6jrw1PH1VS

The World Health Organization issued a report in 2016 stating that air quality could be improved by banning vaping in indoor settings because non-vapers are exposed to chemicals in the vapor. 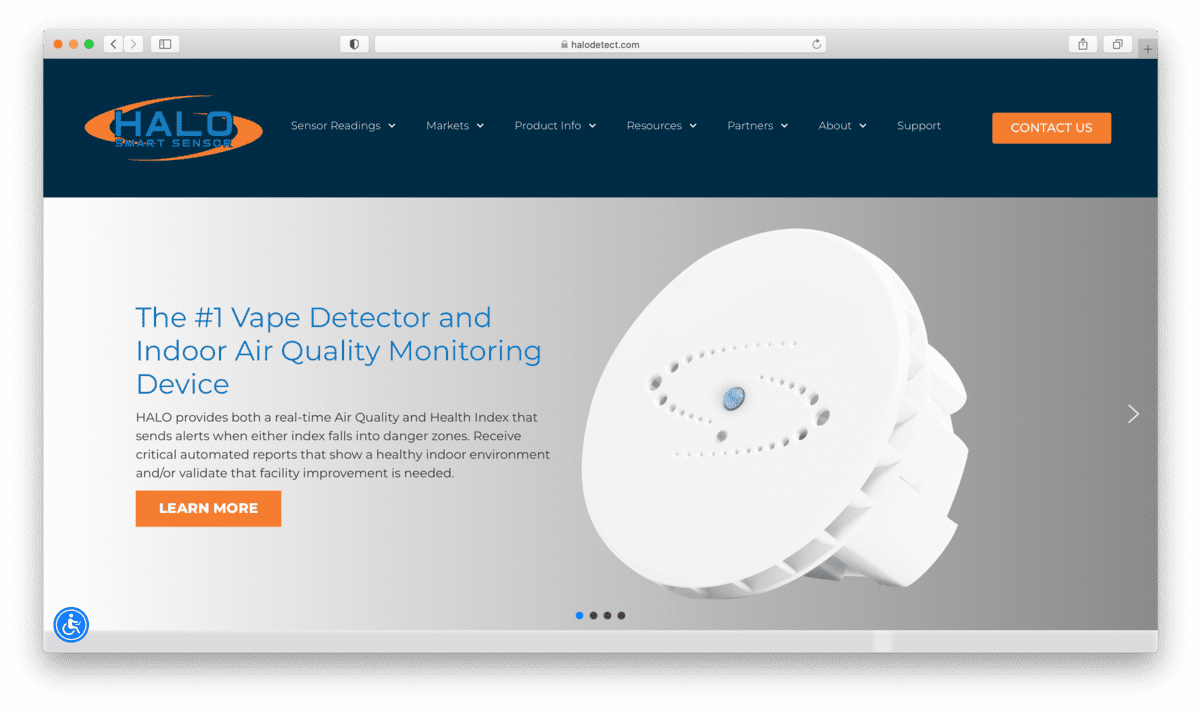 These vape detectors are made for monitoring air quality in low-risk environments and detecting loud noises, shouting, and other sound abnormalities where cameras cannot be installed. They can work in places with high airflow levels, including schools, and are less likely to give off false alarms triggered by cleaning aerosols.

The Halo Smart Detector has 12 sensors that can detect various particulates, including those from THC oil cartridges. They can also detect vaping when someone is trying to mask the vapor. Also, these devices can send alerts for carbon monoxide, carbon dioxide, and nitrogen dioxide.

They can also detect noise abnormalities such as gunshots and shouting. This noise detection feature can prevent school and workplace violence, including bullying and hazing.

These devices can be broken and damaged very easily, but tampering can be detected, and those responsible for them can be instantly notified if something is wrong.

How to Use the Halo Detect

The Halo is connected to the Halo Cloud, which is an online dashboard that allows users to manage different devices while receiving real-time feedback. Operators can use this information for documenting alerts. 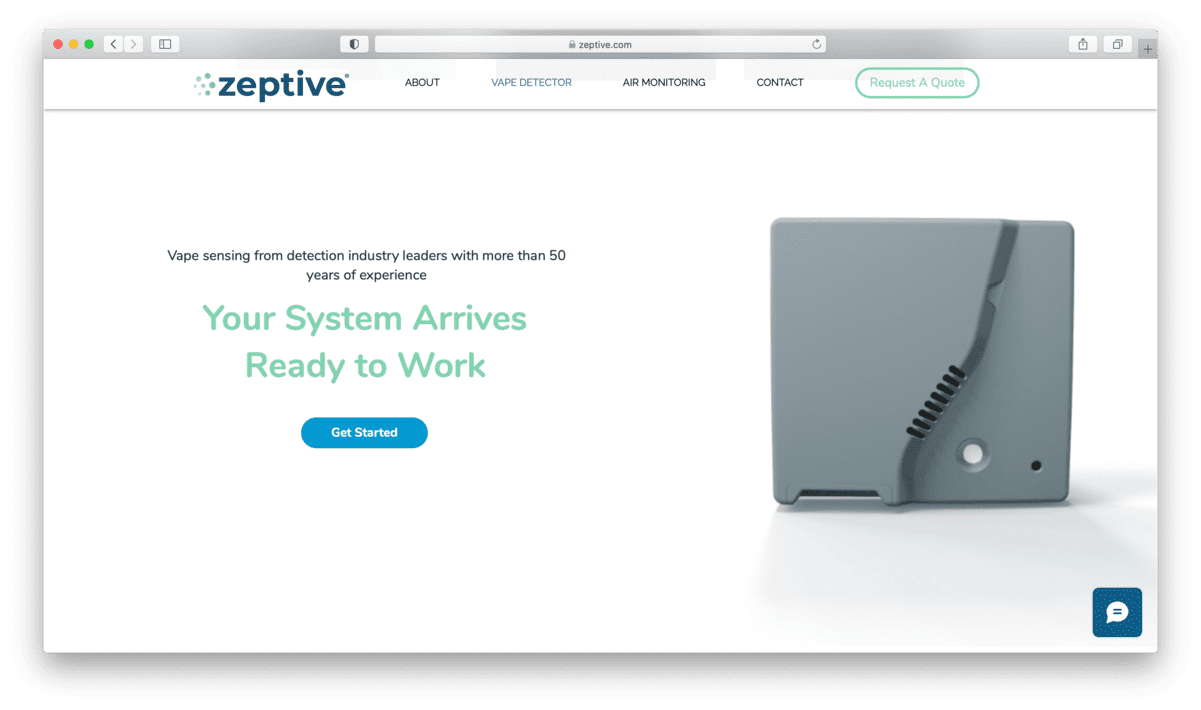 Zeptive is a sensor company created by people with 50 years of experience working with sensor technology. The company’s founders wanted to provide schools with a way to prevent vaping on their campuses. According to the company that produces these devices, Zeptive sensors are easy to set up and can start working in minutes.

These vape detection devices can work in multiple rooms and common areas simultaneously. They can also work on school and company-owned vehicles for transporting people to and from school and work.

These devices are very difficult to tamper with because they include a tamper sensor, wire guard, and tamper-proof screws. In addition, operators will get notifications if someone tampers with the sensor.

How to Use the Zeptive

Zeptive sensors are easy to install and operate. Installation can be done without professional assistance and can be put anywhere they are needed without any wiring required.

After setting them up, they can be programmed to send alerts for vaping, battery status, and tampering. Notifications can be received by phone or computer with a timestamp included in the message. 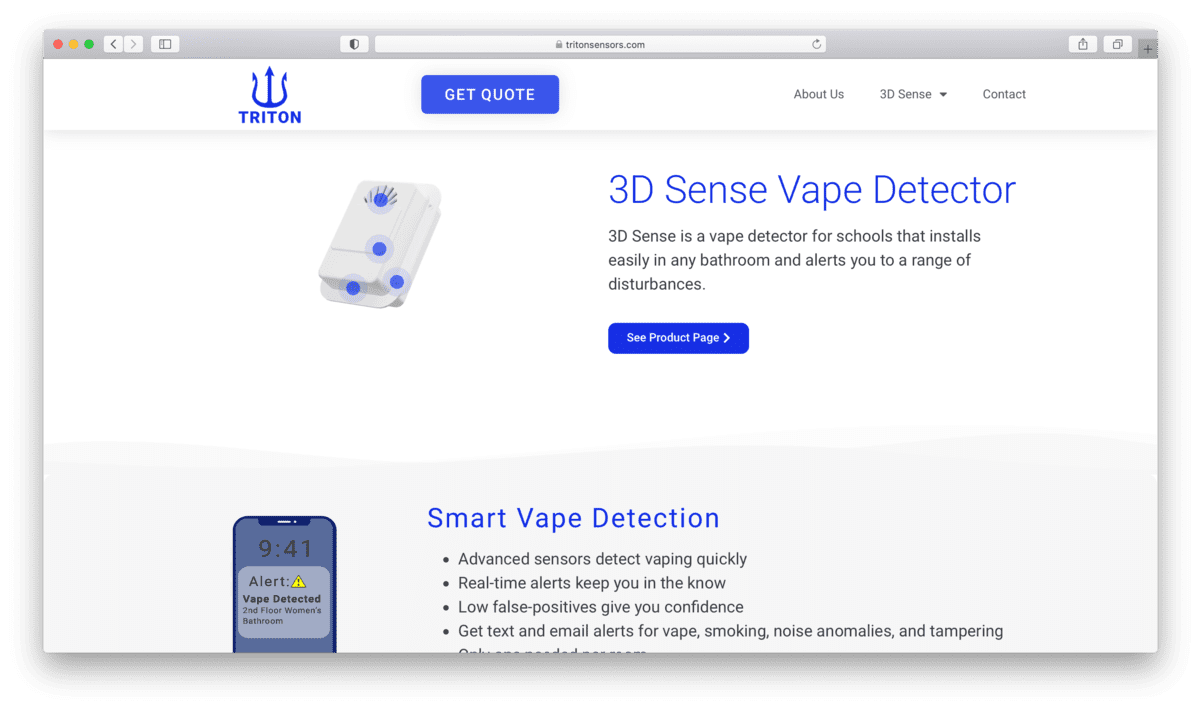 The Triton is a 3D vape detector that can be installed in bathrooms to report different disturbances, including vaping. Their advantages are that they are easy to operate, install, and inexpensive compared to similar products. According to the manufacturers, schools can save over $3,000 by buying these devices.

Sensors inside the Triton take notice of vaping quickly and send real-time alerts to teachers and administrators. They can also be used for detecting smoke and noise anomalies like shouting and gunshots.

Triton sensors are tough to tamper with because monitors receive instant notifications when someone starts fooling with them. Additionally, they have advanced artificial intelligence to reduce false alarms.

How to Use the Triton Sensor

Triton sensors are straightforward. Only one device per room needs to be installed, and contacts for each device can be assigned on the dashboard. Contacts will get text and email alerts whenever the sensor detects vapor, smoke, tampering, or loud noise.

Is There a Detector for Vaping?

Yes, there are detectors for vaping, such as the devices listed above. They have many of the same features that allow them to detect vapor from e-cigarettes, smoke, carbon monoxide, loud noises, and other things that can threaten people.

How Does a Vaping Detector Work?

Vape detectors work similarly to smoke detectors. They are installed in multiple locations throughout schools to detect everything from e-cigarette vapor to carbon monoxide. If the detector detects anything in the air that should not be there, it will notify the person responsible via email, text message, or IO trigger.

What Does a Vape Detector Cost?

Vape detectors can cost anywhere from a few hundred dollars to over a thousand. The higher-end devices, like the Halo Smart Sensor, can cost between $800 and $1,200, depending on the vendor.

How Can I Tell If Someone Is Vaping in My House?

It depends on how long someone has been vaping in the house. The best way to know is by scent. If there is a sweet, fruity smell in the air or the smell of tobacco, someone may have been vaping.

Vaping detectors look like they can be practical tools in helping people to enforce indoor vaping bans.

But vape detector technology can do more than prevent vaping.

They can detect unacceptable noise levels, carbon monoxide, and various harmful substances that can lower air quality or pose a danger to people in schools and workplaces. Even though they are expensive, having one is cheaper than having separate devices to detect e-cigarette vapor, carbon monoxide, smoke, etc.

If you have used a vape detector in schools or workplaces for which you are responsible, feel free to chime in with your thoughts. We are curious about people’s experiences with these new gadgets.