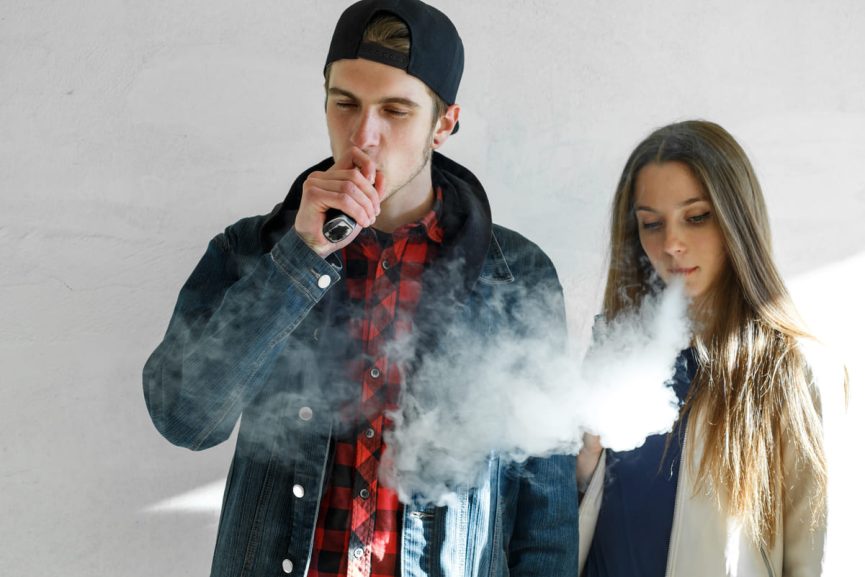 The act of inhaling and exhaling vapor containing nicotine and other flavoring produced by a device designed for this purpose, known as vaping, has been the fastest-growing method of tobacco consumption in the last decade.

According to new research presented at the European Respiratory Society (ERS) International Congress, the percentage of teens who tried vaping increased from 23% to 39% between 2014 and 2019. The TobaccoFree Research Institute Ireland (TFRI) study in Dublin collected and analyzed data on 10,000 teenagers between the ages of 17 and 18.

How Do Parents Influence Teens’ Vaping

It is common knowledge that growing children learn by mimicry. They pick up their personality traits and habits by watching how their parents live. So one could infer without any statistical support that smoking parents would have some sort of influence on their growing kids and teenagers.

However, the latest news on vaping from the ERS meeting on Saturday, September 4th, 2022, in Barcelona, Spain, provides statistical evidence. The data obtained from the Ireland study suggested a strong correlation between smoking parents and the usage of e-cigarette products by young adults.

It showed that teens whose parents smoke are 55% more likely to become vaping teens and 51% more likely to try out traditional cigarettes. In addition, approximately 66% of those who tried vaping said they did so out of curiosity, while about 29% did so because their friends vaped.

Only 3% said they used e-cigarettes to help them stop smoking regular cigarettes. The research also showed that teenagers that lacked proper parental monitoring were likely to indulge in teen vaping.

This is also in line with the results obtained by the United States National Youth Tobacco Surveys in 2016. They found the most selected reason for the use of e-cigarettes among middle school and high school students was the use of tobacco products by “friends or family members” (39%).

What are the Experts Saying?

Dr. Jonathan Grigg, the head of ERS Tobacco Control Committee, commenting on the study out of Ireland said “These findings are worrying, not just for teenagers in Ireland, but for families all around the world.” He said the result observed from the research indicates that more teenagers are trying out vaping and not as a quit smoking aid.

We can see that parents and friends have an influence on teenagers’ decisions to try e-cigarettes, and that’s important because these are factors that we can try to change.

She urged the government to enact necessary laws to protect children and young adults from potential vaping side effects.

Is Vaping a Better Alternative to Smoking

A National Survey in the United States found in 2016 that less than a third of the youths in the US believed that e-cigarettes pose a risk of serious harm. 17% of respondents in another teen vaping survey summarized by the CDC gave their reason for using e-cigarettes as the belief that it is safer than smoking.

So there is a consensus among the general public on the safety of using e-cigarettes compared to smoking. However, the health experts are of a different opinion.

There’s a perception that vaping is a better alternative to smoking, but our research shows that this doesn’t apply to teenagers who usually haven’t tried cigarettes prior to e-cigarettes.

He concluded that the findings suggest that for teens, vaping is a path to nicotine addiction, rather than a way out of it.

The Different Vaping Effects on Boys Vs. Girls

The TFRI study analyzed data from 3,421 16-year-olds to check for differences between both genders’ use of e-cigarettes. They found that although boys were more likely to try or use e-cigarettes, usage rate was increasing more among girls.

The study also revealed that having friends who smoke and having less parental monitoring are both significant factors in teenage use of e-cigarettes, more so for boys than girls.

Dr.Joan Hanafin, the study’s Lead Researcher, stated, “We can see that the number of teenagers using e-cigarettes is changing fast, so we need to keep monitoring the situation in Ireland and around the world. We also plan to study social media to understand how this influences girls’ and boys’ vaping behavior.”