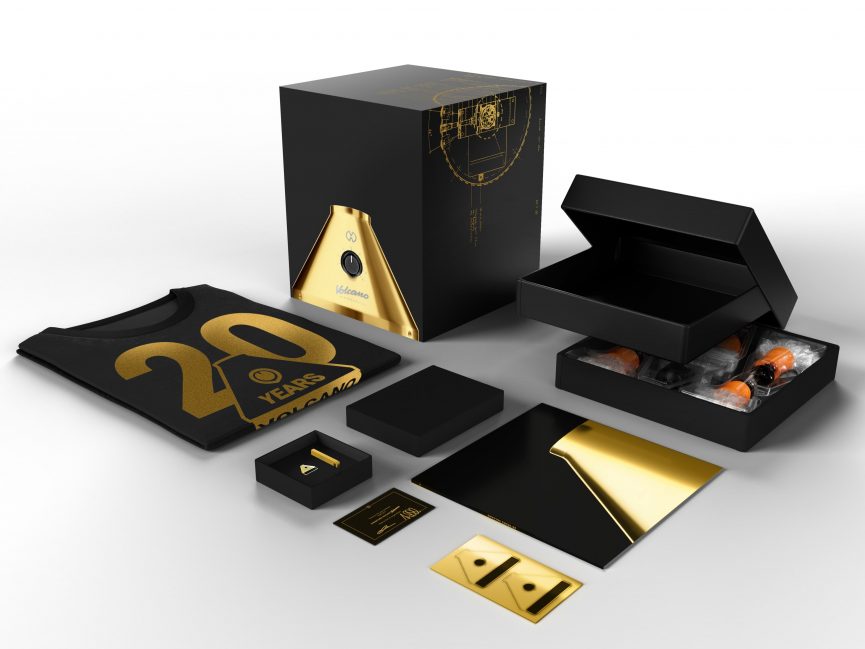 Storz and Bickel, the German company behind the iconic Volcano vaporizer, is celebrating its 20th anniversary with a new edition of the Volcano. The company that began in Markus Storz’s basement has grown to become the gold-standard in vaporizers internationally. The first Volcano was released in 2000.

It surprised everyone with its novel design, as well as its high-performing capacity. The Volcano has not changed much from its original design, even though upgrades and additions have been added. Storz and Bickel have also expanded their product line. It has released many other vaporizing devices keeping in line with its commitment to quality and technical wizardry.

💨 Order now on our website (https://t.co/zzfzJiDZAr) – as long as stock lasts! pic.twitter.com/ext9O5I905


The company has released a 24k gold Volcano to celebrate its 20th anniversary. The 24K Volcano features the same design specifications and form factor as the classic version, but it is now covered in 24K gold plating. The 24K Volcano uses the analog control panel of the original Volcano. It has a knob on its front that users can adjust to their temperature specifications.

Celebrate uniqueness! ✨
Treat yourself to a special experience and get your hands on one of only 100 SIGNATURE VOLCANOs.


The 24K Volcano Classic also comes with all the accessories the regular Volcano comes with including the balloon attachment as well as the whip-style inhalation. But it also features special accessories like:


The Volcano Classic 24K is a limited edition collector’s item, and it is the perfect gift for the vaper in your life. It will only be available till the end of the year, so make sure to get yours while they are still around.

Where It All Began

The story of Storz and Bickel begins with Markus Storz. The young engineer took inspiration from an article that argued that herbs did not need to be burned. That instead of burning them, they could be heated to produce an aerosol that would then be inhaled. Storz took this idea and began experimenting with a heat gun and a glass pipe – the building blocks of the Volcano.

When Storz realized that the combination of the heat gun and the glass pipe could create harmful inhalants, he made several modifications. He added things like a different heating element, an air pump, and a regulator. Markus’s goal was to create a device that would be suitable for medical purposes. When he was satisfied that his prototype met those goals, he released the Volcano’s first version in 2000.

Only two years later, Markus realized that he needed to update the Volcano. He went looking for a partner, one with the requisite background in engineering that Markus was looking for. He found this partner in Jurgen Bickel. The two joined forces and, in 2002, created the iconic Storz and Bickel imprint that we know today.

The release of the first Volcano quickly put the company on the map. The device and the company started to become more and more popular. The duo realized that they had to expand. They soon opened a branch of the company in Oakland to better capitalize on the American market.

With each successive year, the company made improvements to the original Volcano. As well as updating the device, the imprint also set its sights on creating new lines and new products. As vaporization gained a larger following among the public, the company quickly sought to offer its customers different products.

The Mighty, followed by the Crafty, soon joined the company’s product line. The two devices were more compact and portable than their big brother, the Volcano. With two new products under its banner, the brand also expanded its manufacturing facilities and opened up new production centers in Germany.

Vapers all over the world enjoy quality of these vaporizers. We hope to see their new releases more often.