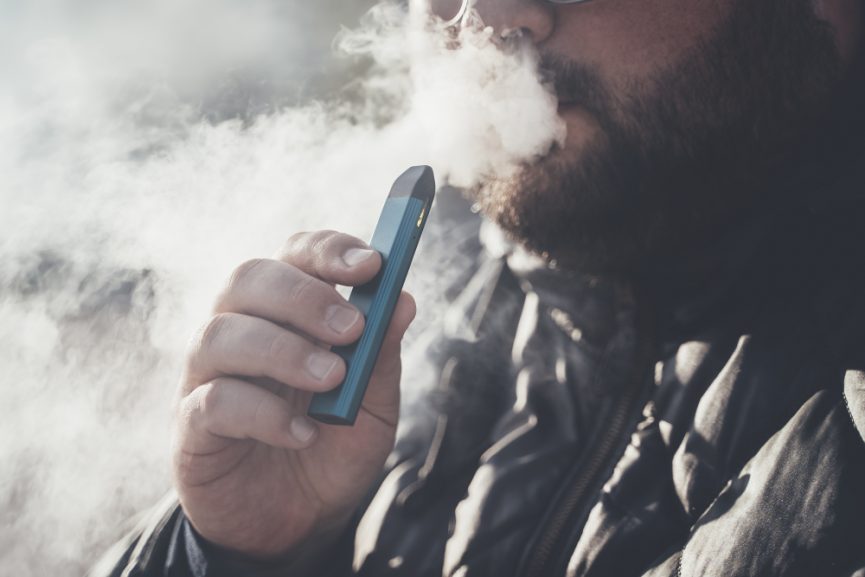 The study looked at the effects of e-cigarette use in a pod-based device — similar to the Juul device — that contained nicotine salts e-juice.

Nicotine salts are more potent than the nicotine found in most e-juices or cigarettes, for that matter. After six weeks, the participants who had used pod e-cigarettes showed significantly lower levels of chemicals typically found in regular smokers. The study also reached other important conclusions about pod e-cigarette use. Keep reading to find out more.

Why Pod E-Cigarettes and Nicotine Salts?

The study’s authors sought to find out what potential e-cigarette pod devices with high-potency nicotine salt have as harm reduction tools. That is, how could e-cigarettes with this new type of liquid nicotine help people stop or reduce their cigarette consumption.

Prof Jasjit S. Ahluwalia mentioned that pod e-cigarettes have been maligned as gateway devices for young people to start smoking.

But this study aimed to examine whether the combination of nicotine salts e-liquid in an easy-to-use device would:


The authors also wanted to monitor changes within each group. This meant that they also looked at whether the e-cigarette users became exclusive users, dual-users (e-cigarettes and cigarettes), or cigarette-only users. Another important feature of the study was the racial make-up of the participants who were exclusively Black and Latinx.

The authors decided to focus on these minority groups as the majority of studies looking at the effects of e-cigarettes are mostly for white users. This disparity continues even though Black and Latinx communities smoke less than their white counterparts, but experience more serious health problems from smoking.

The study used 186 participants, all of whom were smokers at the beginning of the study. The group was divided into an e-cigarette group (125) and the rest formed the control group that continued smoking cigarettes (61). The e-cigarette group was given pod-based devices with nicotine salts e-liquid with 5% nicotine content.


Other important markers like blood pressure and the presence of cotinine (a degraded form of nicotine commonly found in all smokers and vapers) remained about the same. The authors mentioned that lung function and blood pressure need more time to show any change, much more than the six weeks of the study duration.

Another important finding was that the e-cigarette group showed different use patterns. During the six weeks of the study:

The study’s findings prompted the authors to call for more research into the possibility of using nicotine salts pod devices as harm reduction tools. The e-cigarette group significantly reduced their consumption of e-cigarettes, while their nicotine consumption remained unchanged. Most importantly, the e-cigarette group saw important reductions in cancer-causing chemicals than those who continued smoking regular cigarettes.