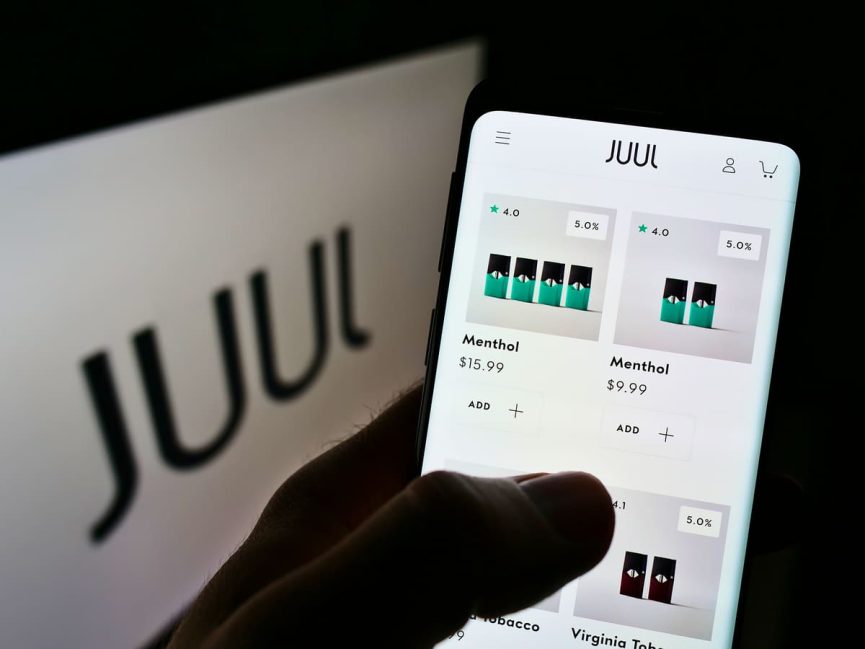 Juul Labs, Inc. is an American electronic cigarette company founded in May 2015 by two Stanford University graduate students. Their Juul e-cigarette products have a sleek design that resembles a USB thumb drive.

Only two years after releasing its Juul Pods, Juul became the most popular e-cigarette in the United States. By September 2018, it had a market share of more than 70% of all vaping products sold. The company’s rise coincided with the 2019 teen vaping epidemic. Resultantly, it attracted the interest of regulators and legislators.

In February 2020, thirty-nine states launched an investigation into Juul Labs’ marketing and sales practices to examine if the company targeted youth and made misleading claims about the nicotine content of their devices.

Following a two-year investigation, the electronic cigarette manufacturer has agreed to pay $438.5 million in settlement fees to 33 states and Puerto Rico.

The settlement fee is approximately 25% of Juul’s US sales last year and will be paid out over six to ten years. The firm had previously settled lawsuits in Arizona, Louisiana, North Carolina, and Washington.

The company is still facing litigation from nine other states and many personal lawsuits filed on behalf of adolescents who claim to have become addicted to Juul.

According to a joint investigation board statement, Juul was found to have marketed its e-cigarettes to underage teens through launch parties, product giveaways, and ads and social media posts featuring young models. They also failed to disclose their pods contained nicotine, an addictive substance.

After several investigations by the U.S. Food and Drug Administration (FDA) in 2018, it appeared that Juul Labs’ entire growth strategy was to appeal to minors. Indirectly luring users who are most susceptible to nicotine addiction.

The FDA’s battle with Juul eventually resulted in some Juul flavor bans. The agency also issued over 1,300 warning letters and fines to retailers caught illegally selling Juul products to minors in 2018.

What Causes Would The $438.5 Million Go Towards?

Mr. William Tong, the Attorney General of Connecticut, announced the settlement agreement on Tuesday, Sept. 5, 2022. He stated that Connecticut’s portion of the fee, which should be at least $16 million, would be invested in vaping prevention causes and educational efforts. According to him, they believed the funds would go a long way toward curbing the increase in youth vaping.

“I’m under no illusions and cannot claim that it will stop youth vaping,” he said. “It continues to be an epidemic. It continues to be a huge problem. But we have essentially taken a big chunk out of what was once a market leader, and by their conduct, a major offender,” Tong said at a news conference in his Hartford office.

As part of the settlement, Juul agreed to refrain from various marketing practices. They include using cartoons, paying social media influencers, depicting people under the age of 35, billboard advertising, and public placing ads in any outlet unless at least 85% of the publication’s audience are adults.
The agreement also restricts where Juul products may be placed in stores. Also, age verification for all sales and online and retail sales restrictions.

Juul said that the settlement terms are consistent with its marketing practices since a “company-wide reset” in the fall of 2019 and that it is now focused on the future.

“We believe that once the FDA does a complete review of all of the science and evidence presented, as required by law, and without political interference, we should receive marketing authorization,” the company said in a statement.

Results From a Recent Survey

A 2021 survey by the FDA and the Centers for Disease Control and Prevention found most teens now prefer disposable e-cigarettes.

Puff Bar was the most popular among high school and middle school students, a relatively new brand of disposable vapes available in flavors such as Banana Ice and Blue Razz. In general, the survey showed a decrease of nearly 40% in the teen vaping rate as many students were forced to learn from home during the pandemic.

The Connecticut Attorney General stated that the agreement was only an “agreement in principle” and that the states would finalize the settlement documents over the next few weeks. However, the FDA, which had previously decided to ban Juul vaping products, has allowed Juul pod sales to resume temporarily while they review the scientific evidence.