The San Francisco voters on the final say of Vapor products 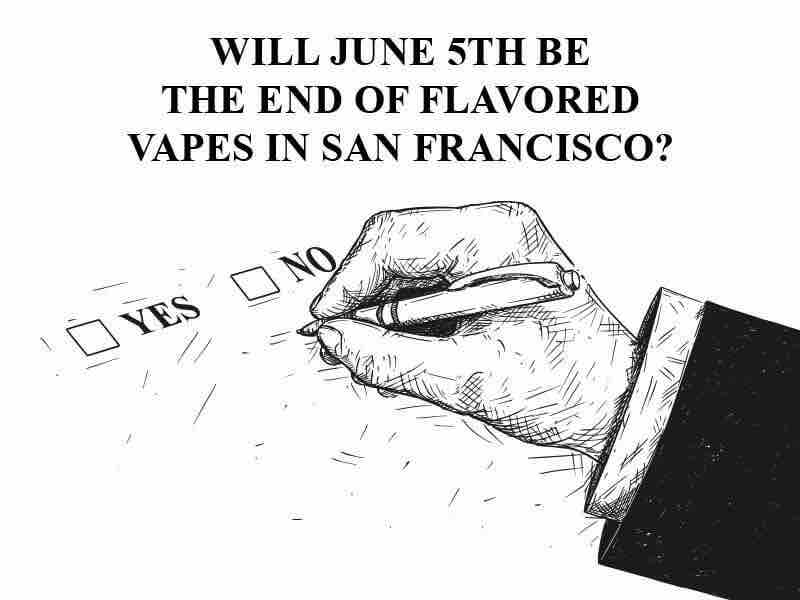 With 99% of all districts reporting their results, 68% of residents voted in favor of the ban.
Small businesses, local vape retailers, and the vaping lobby all stringently opposed the ban, saying that it would not only affect their businesses.

The ban would result in, “making it harder for adult smokers to quit.

Public health groups, like the American Heart Association, all supported the ban, citing the skyrocketing popularity of vaping devices like the Juul among young people.

The ban is among the most restrictive laws against vaping in the country. The fear, among who were against it at least, is that other municipalities will follow suit and enact bans of their own against the same types of products.

The voting day of the Proposition E

The people of San Francisco will on June 5th decide whether they will ban or uphold flavored tobacco products which include e-liquids. On this day, among other issues that the city will be addressing on its primary elections along with other special elective positions that also include the mayor’s position.

The ban, passed last year by the city’s Board of supervisors was not received positively and had opponents garner signatures for a petition to challenge this law in a referendum. Known as Proposition E, the vape flavor ban was initially coined to target menthol cigarettes, but the board later extended to all flavored tobacco products including vapor products, hookah, small cigars and smokeless tobacco.

Efforts of the opponents and the proposers

One major tobacco company, R.J. Reynolds Tobacco Co. has invested millions of dollars, nearly $12 million to be specific, to ensuring that its campaign labeled “No on Proposition E” is all over the airwaves on TV and radio, as well as ads on mailboxes that persuade and urge voters to reject the proposition E San Francisco 2018.

Other tobacco counterparts have raised a total of $5 million. This raises the total to $17 million in citywide campaign and awareness strategies. On a sharp contrast, the supporters of the ban have only managed to raise $2.8 million. This includes an amount of more than $2 million of contribution from billionaire Michael Bloomberg, New York City Mayor.

The public reactions and vision for the Proposition

Small businesses, groceries and smoke shops have also expressed their outcry. They are worried since most of their customers would check in to buy flavored tobacco or similar tobacco products; this means a backlash in their business as they remain oblivious once the law passes.

The public took the debate to twitter with two opposing hashtags #YesOnE and #NoOnPropE with the latter having garnered a lot of movement and influence.  Opponents of the ban have been flocking the steps of City Hall in numbers with banners rallying for the fight against the ban. They have accused the #YesOnE team that they were paying protesters just to send a fair message at the rally.

Amazing rally today! Thanks everyone! #NoOnPropE sent a loud and clear message even though the failing #YesOnE folks paid people to be there in protest. Sad. Then again your push for prohibitionist policies is just as sad! pic.twitter.com/DU3RgldmL9

What the ban means to different parties of interest

Supporters of the ban were quick to mention among arguments on smoking ban that the ban was a great way in preventing another generation from the mighty chains of nicotine addiction. Expressing that not banning these tobacco products was just a Pandora’s Box. The same nicotine in the cigarette is still in the flavored tobaccos that include chewing tobacco, menthol cigarettes, vaping liquids in flavors like mango, cool cucumber and candy cotton.

Prop E goes far beyond what its supporters claim. The Board of Supervisors’ policy of banning some products, but not others, fails to meet the standard of real leadership. #NoPropE #SanFrancisco pic.twitter.com/bEjNYdNo6z

Critics have on the other side pointed out that state of California had risen the legal smoking age to 21, so the ban would drive down the sale of tobacco creating a loop for the thrive of a black market for these products. They also claim banning vapor products will drive people that had initially quit smoking back to smoking.

So all is left for the final verdict of the San Franciscan voters to decide which route they will take. After all, it is a battle of the ‘morals’ the health concern upon the young generation vested in the city’s Board of supervisors against the tobacco industries. All is left in the hands of the voters!