Well, what a coincidence! I mentioned the Noisy Cricket from Men in Black a few reviews ago, just as an example of how something tiny could still be quite powerful, and, only a few days later, I get assigned to review a mechanical mod that is called . . . . The Noisy Cricket! Read on this brand new Noisy Cricket Mod Review to know what it’s all about.

Truth be told, I haven’t had much opportunity to review mechanical mods, so I was anxious to see not only how the mod would perform, but how I would perform as well. I’ve always been curious about the mythical mechanical mods, which compared to box mods and vape pens, is the Mount Olympus of vaping; so simple, yet so complicated.

The Noisy Cricket Mod falls into that category since it is deceptively simple-looking. You won’t find any digital readouts, no selector buttons, no kind of control whatsoever on the mod, save for the firing button.

Sorry, I had to throw a Dr. Evil laugh in there, for some reason.

So, since I’m only reviewing the Noisy Cricket Mod, this review will be a little shorter than most of my other reviews.

The Noisy Cricket Mod comes in a see-through transparent plastic case so you can see its mechanical awesomeness up close.

Here’s what you’ll find in the Noisy Cricket Mod case:

On the outside, the Noisy Cricket Mod is simplicity, defined. It has a beautiful finish to it and is made of stainless steel so you can feel it has a little weight, but that extra heft was something that I liked about it.

Batteries don’t come with the Noisy Cricket Mod box, so you need to install your own 18650 batteries. I took out my Samsung 2500mAh cells that were charged and ready to go. You have to install the batteries by removing both the Delrin firing button and the 510 hybrid connector. 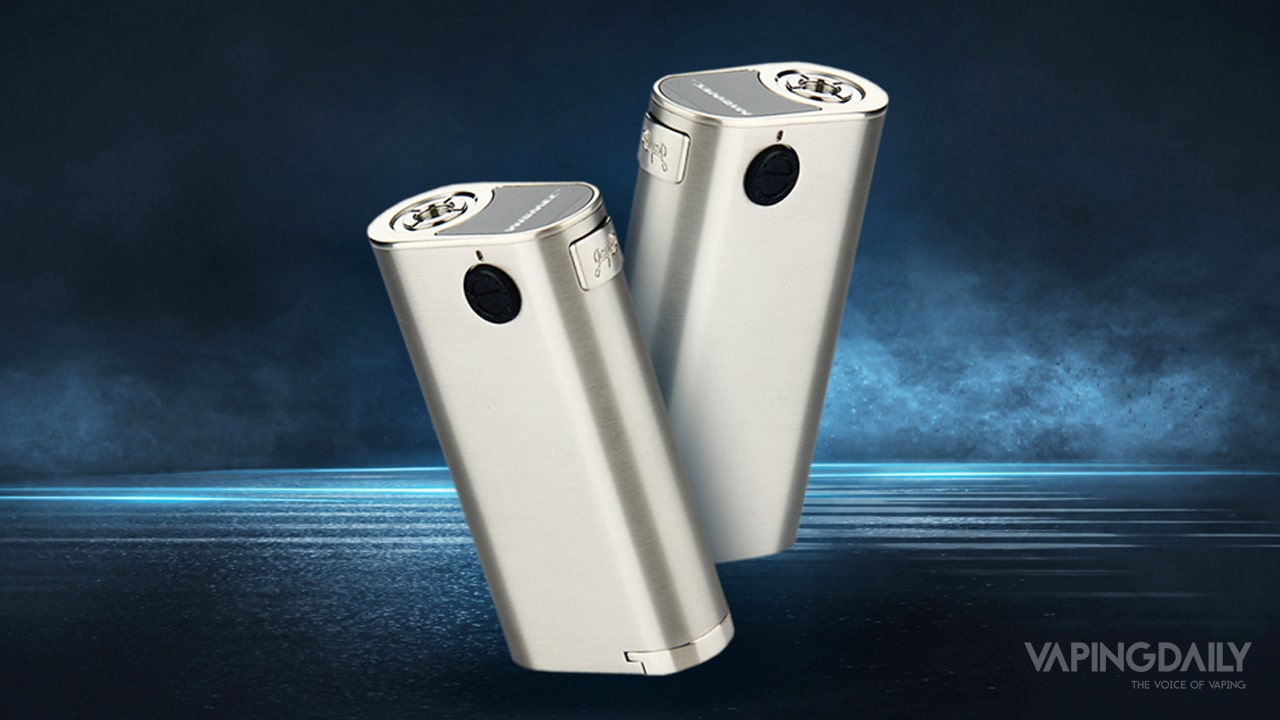 The hybrid 510 can accommodate only 22mm tanks since anything bigger would interfere with the firing button. When you do attach your RDA to the Cricket, I found that the 22mm limit was best also for aesthetic reasons since it sat flush with the edges of the mod and didn’t protrude out unnecessarily.

A lot of what’s interesting about the Noisy Cricket Mod is in the small details that you can find inside the mod itself. So, I did some exploring. The Cricket is incredibly easy to take apart to get an up-close look at it.

So the top part(s) — the firing trigger and the hybrid connector — while seeming relatively simple have a complexity all their own. The hybrid adapter, for example, has two sides, which you also must remember how to install correctly.

On one side of the adapter, there is an indented circle that is supposed to be the side that connects to the battery and also acts as protection against the battery grounding out your atomizer.

The firing button is also built solidly. When you take it out, (I found using a large coin, like a quarter, worked best to start to unscrew it) you’ll see the brass plug underneath that connects with the battery and is spring-loaded.

Using an Allen key, I unscrewed the brass plate from the rubber casing. Six vent holes circle the center hole (which act as your peak insulator as well) that square up perfectly with the Delrin button housing, so there was no looseness to the entire apparatus; everything was in place and wasn’t going anywhere.

The mod itself is also easy to take apart and put back together again. When I thought there was nothing left to the mod, I noticed that when I took out the batteries, firing button and adapter, I heard a little rattle inside the mod, so, I decided to remove the bottom panel to see what was inside.

Inside the mod, I found there is a gold-plated contact platform that connects the two batteries and basically, powers the whole device. This little platform, akin to a see-saw, is what was making the rattle. And after some more cursory exploring, I put everything back where I found and moved on to testing the noisy cricket.

The Noisy Cricket Mod requires an atomizer that has a 510 pin that protrudes out significantly and does not recess back into your RDA. I decided to stay with the Wismec/JayBo family of products and go with the Indestructible RDA and being very careful to install everything the right way, lest I blow off my own face. Everything vaped wonderfully.

It just chucked and chucked until it could not chuck anymore.

The entire device, the RDA included worked like a charm. It’s such a portable device once you have everything set up right. It fits great in your hand although there is the danger of auto-fire on the Cricket, so maybe don’t just put it in your pocket.

There were a lot of factors to consider when deciding which other mech mod to compare the Cricket too, and based merely on price point I thought the Phantom from Wotofo was the only one to stand up to the Noisy Cricket Mod.

There are a lot of similarities between the two, but I found that the dearth of options that came with the Phantom (spare parts, replacement parts, parts made from different materials) was an added bonus.

But then again, a main selling point of the Noisy Cricket Mod is its simplicity; what you see is what you get (even what you don’t see). So for the authentic mech mod experience that it offers, the Cricket takes it for being a pure expression of vaping.

The latest price I saw the Noisy Cricket Mod for was $20. $20. For an easy-to-use (but not easy to operate, don’t get fooled by its simple setup and design) great-looking, durable device, the Cricket is a steal at its suggested retail price.

I found that there was a slight build-up of e-juice residue around the hybrid connector after a while. Be sure to keep your Cricket spiffy clean lest the mod, especially the firing button, malfunction.

The Noisy Cricket Mod just looks great. It comes in six different colors, and they all go well with the overall design. I would recommend either the black or the classic silver.

You can never go wrong with stainless steel. The Noisy Cricket Mod was built to last, and all the internal parts are beautifully machined and lend themselves to a long-lasting machine.

For my first foray into the world of mech mods, I feel like I came out relatively unscathed. There isn’t much to it, but then again, there is. I mean, it’s as simple as figuring out everything beforehand, so you don’t make any crucial mistakes and ending up shorting your mod or worse.

The Noisy Cricket Mod was a great-looking device that was easy to take apart to make for a worthwhile, hands-on experience. It was a perfect size for portable vaping and all the parts to it well-made and durable.