Impact of Tobacco on the American Health System

Centers for Disease Control and Prevention stated cigarettes are responsible for 48.000 deaths in the U.S per year. Furthermore, around 16 million Americans are living with a disease caused by smoking. This data indicates the vast effect tobacco has on the American health system.
Tobacco companies use multibillion-dollar campaigns for advertising and sell 300 billion cigarettes per year in America. The overall burden of tobacco use in health care institutions is increasing and represents one of the major issues of public health control.

According to Reuters, a new analysis says of every $10 spent on health care in the U.S., almost 90 cents is due to smoking. To be even more precise, 8.7 percent of all healthcare spending ($170 billion a year) is for tobacco-caused illness.

Use of electronic cigarettes is still a controversial subject. Some see it as a package of harmful substances. Nonetheless, the vaping industry is growing in size and popularity of its products. 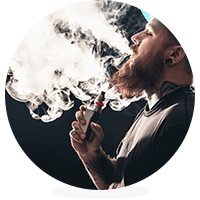 According to Euromonitor International, the U.S accounted for about 43% of the $8 billion market in 2015, thus making it the leading market in e-cigarette production (the U.S. market is bigger than China, Italy, Malaysia, and the U.K. combined).

Estimations suggest a significant growth rate will occur by 2020 when vaping products will account for about $20 billion.

Alternative products have found its place among many consumers. What makes vaping gadgets so appealing are the vast amounts of flavors, being a new trend or being an alternative source of nicotine. As of late, the amount of research going into studying vaping and its health effects are increasing.

However, although some may say that vaping a is a good alternative to other sources of nicotine, that does not mean vaping doesn’t cause any harmful effects. The US Food and Drug Administration (FDA) started regulating alternative tobacco products in 2016, because of the potential negative health impact vaping may have.

Vaping may be connected to the following health issues:

The one thing that particularly bedevils e-cigarettes, especially with insurers, is the nicotine content. Some insurers go so far as to classify anything with nicotine content, even patches and gum that are part of nicotine replacement therapy, as a tobacco product, resulting in higher premiums.

As much as vapers like to proclaim that e-cigarettes are better to traditional cigarettes, insurance companies do not make any such distinction. Given the fact that e-cigarettes and vaping are a relatively new phenomenon, life insurers are not inclined to make important decisions based solely on a group’s (vapers in this case) biased opinions.

Insurance carriers also have a hard time distinguishing between true vapers and those who are “dual use” practitioners, meaning those who vape and smoke at the same time.

Moreover, even if a vaper does not use any other tobacco products, the nature of tobacco-related illnesses appearing years after a person has stopped smoking (cancer, chronic obstructive pulmonary disease) is something that also perturbs insurance companies.

With so many unknowns out there regarding vaping, and now, with the FDA’s 2016 decision to classify vaporizers as tobacco products or as electronic nicotine delivery systems (ENDS) vapers might even have a harder time finding a flexible insurance carrier.

Most insurance industry experts counsel one thing: be completely honest. So even if you are an ex-smoker and have made the permanent switch to vaping, tell your insurance agent.

Being dishonest, even in the slightest, could hurt your chances in the long-run. If, on your application, you declare yourself completely tobacco and nicotine free (even though you still vape), the medical tests and blood and urine analysis that the insurance company is sure to order will uncover your lies.

However, while honesty might be the best policy, it might not translate to lower premiums. Telling your potential insurance carrier that you vape instead of smoke will not result in you getting the same premiums as a total non-smoker.

The decision ultimately lies with the insurance company, however. Here are a few of the companies that seem to be the most understanding, according to Mike Woods, an insurance underwriter for Pinney Insurance Center:

What the Experts Say

Most experts also caution that vapers, if they want to qualify for non-smoking premiums, wait for at least a year before they apply for life insurance. During this year, they would be best served by not vaping at all, so the insurance company finds no trace of nicotine in their system.

It is also important to remember that insurance companies do not only base their underwriting decision on smoking or non-smoking habits. Other factors like age, lifestyle, family history also play a major role in making their decisions.

If you are applying for life insurance, be sure your application takes into account all these factors. So, not vaping or smoking before submitting your application but still eating poorly and not exercising, could still jeopardize your chances.

Some describe e-cigarettes as a cocktail of toxic chemicals. If we do not compare them with common cigarettes by emphasizing its milder effect on health, we can see vaping is a serious problem which requires serious approach.

There are numerous counseling options for those who have problems with vaping. Since vaping has increased over 300 percent in the past few years for teen adolescents, hospitals offer specialized teen counseling.