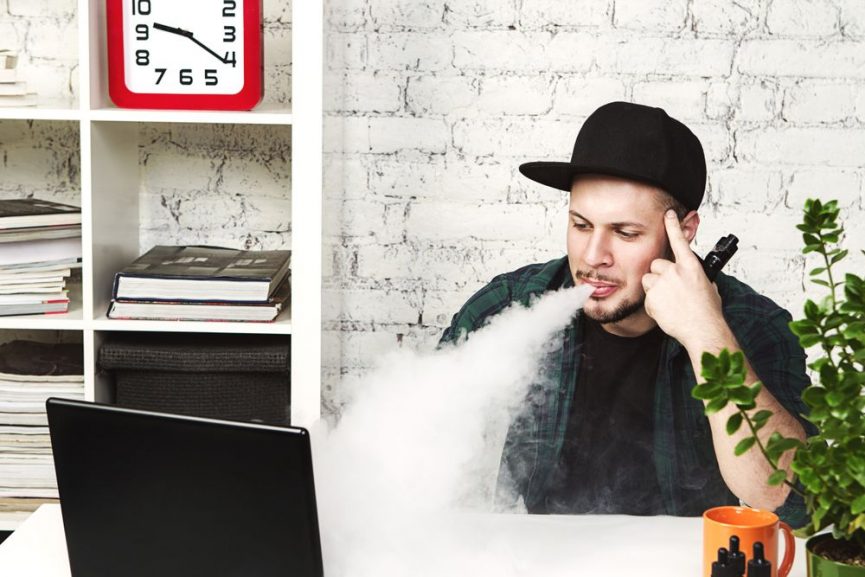 Vapers are now experiencing something similar as non-vapers are frequently asking, why are vapers so annoying?

There is no doubt that clouds of vapor do not pose a health hazard to those in the vicinity as second-hand smoke does, but there is need of some vape clarity on the issue of whether it is ok to vape at work or indoors in general.

And we decided to explore what it means to be a vaper these days regarding what the do’s and don’ts of how you should vape indoors.

Is Vaping Allowed Inside?

Whether vaping indoors is allowed is very much up to the rules of the establishment, and the local state laws.

It is challenging to keep up with what the current status is regarding vaping indoors, but the trend is shaping up as such: wherever smoking indoors is banned, vaping is sure to follow.

Muddying the waters is that some states as of yet do not have any regulations as to vaping and others only regulate certain facilities.

NHS patients 'should be allowed to vape indoors' – and even in their bedshttps://t.co/KNB5Bgzpf5

The only way to know if it is ok to vape inside is to ask at the establishment before vaping. It may also help to check the website of the location as they may have some rules posted.

Can You Use Electronic Cigarettes in the Workplace?

Again this boils down to two things:

The one general rule of thumb when it comes to vaping at work, or anywhere really, is to ask what the guidelines are. Some workplaces may have a designated area set aside just for vapers. Some may only allow vaping to take place in a smoker’s area either outside or an appointed smoker lounge inside.

It may be the case, however doubtful, that vaping in a cubicle or office would be allowed. Setting aside any second-hand vapor risks, many people will see vaping in their vicinity as annoying, or distracting. Double chocolate fudge sweet vape juice may be delicious, but that does not mean that everybody will enjoy being in the same room filling up with flavored clouds.

If there is no specific vaping at work policy, it is best to ask for clarification on what to expect as a vaper in that particular workplace.

Most employers will want some guidelines to lessen any legal issues that might arise.

This isn’t to crack down or discriminate against vapers; it is just to create an environment to make it comfortable, as well as avoid any claims that come up as a result of somebody’s vaping annoying a colleague.

If vaping breaks any e-cigarette workplace policy, then it is best not to try to do any stealth vaping at work. Whether it seems the rules are unjustified, it is not a good idea to test the boundaries. Even if the advertising of a product is as smoking everywhere e-cigarette.

Is Vaping Considered Smoking by Law?

Vaping is in a sort of a grey area when it comes to regulating it as a smoking product. The way things are headed is that it is treated the same as cigarette smoking even though the consensus is that the clouds of vapor are not nearly as bad as second-hand smoke.

Though the FDA seems at least neutral on the risks of vaping indoors, state laws vary.

Even though the FDA regards vaping as being potentially safer than smoking, they are still categorizing it as a tobacco product in the way it is regulated. That regulation seems more geared to how it is marketed and by trying to limit sales to minors.

Vaping indoors is to be banned in New York – so vapers will face the same rules as smokers https://t.co/ibQQKhcZtr

As far as if it is considered smoking, time will tell how the FDA proceeds in its determination about how best to regulate it and if it eventually will fall under its classification.

Can you ban smoking in the workplace? What about vaping?

Yes, smoking entirely can be prohibited in the workplace and would be very tough to challenge that law or workplace rule if it is in an area where vaping is regulated the same way as smoking.
Especially if employers offer a space where smokers can go. In a city where vaping is treated the same as smoking, vapers will likely be forced to follow the same rules.

General Rules of Thumb for the Question, Can You Vaporize Indoors?

Since vaping and e-cigarettes are relatively new, vaping rules and regulations usually fall into a grey area.

What is the best way to vape indoors, then?
Simple courtesy for others can go a long way. Understand that it can be distracting to have somebody vaping close to them and they might not appreciate the smell of the vapor. This is especially true since not many people understand if it is safe to vape or not.

When that isn’t the case, whether we are talking about the workplace or any other indoor space where others are around, it helps to ask particular questions to get clarity on vaping rules. It may be just that there is not a specific policy since it merely has not been addressed up to that point.

If that is the case, there is the possibility of some actual vaping policies that allow for everybody to have their needs and concerns addressed where everybody is happy.

Trying to shape an establishments’ policies is not the best time to prosthelytize the pros of vaping, per se, but rather to make sure that vapers have at least some say in how to policies are written.

As with most things in life, using good judgment and trying to find a middle ground is the best way to make vaping indoors legal and acceptable.
But still lots of co-workers are tired of vapor in the office… What’s the final word so? Are you ready to work in the clouds or misunderstandings gonna last?

4 comments on “Vaping Indoors — Tips on Vaping at Work”