Tobacco Vs Weed: What Causes the Greater Risk? 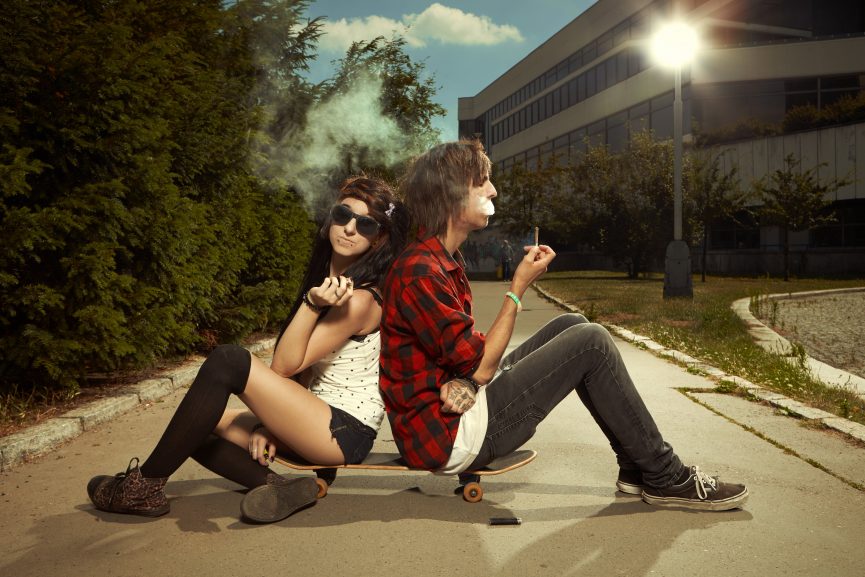 Long-term tobacco use and smoke exposure can demonstrably have adverse effects on your health. In fact, according to the United States Center for Disease Control (CDC), tobacco smoking is the leading cause of preventable death in the country. It is reported that cigarette smoking causes more than 480, 000 deaths in the U.S., which is nearly one in every five deaths. CDC also reports that smoking causes more deaths each year than deaths caused by motor vehicle accidents, alcohol use, illegal drug use, HIV, and firearm-related incidents combined!

When it comes to smoking, studies suggest that tobacco is by far more harmful to the lungs than weed. According to CDC, cigarette smoking causes about 80% of all deaths from Chronic Obstructive Pulmonary Diseases (COPD). On the other hand, weed smoke exposure appears to cause little COPD risk. There is a lack of evidence that connects to any form of chronic inflammation. In the Journal of Harm Reduction, 2005, cannabis researcher argued that, even though both tobacco and cannabis possess similar chemical properties, the two aren’t equally carcinogenic and certainly possess different pharmacological activities.

Specifically, the researchers argued that while is proven to be highly carcinogenic, cannabis contain multiple cannabinoids—many of which possess anti-cancer properties, a certain study notes. So, while weed smoke minimize some carcinogenic pathways, tobacco smoke boosts them. Perhaps this is one of the reasons that there is zero (0) marijuana attributable deaths compared to tobacco (480, 000), alcohol (25, 692), prescribed painkillers overdose (16, 651), and non-prescription drug overdoses (16, 651).

So, while weed smoke, or even weed vapor from a vaporizer, minimizes some carcinogenic pathways.

Tobacco Vs. Weed and Addiction

Tobacco is highly addictive since it contains chemical nicotine. Like cocaine or heroin, chemical nicotine changes the way a smoker’s brain works and causes cravings. It is believed that this addiction to nicotine is what makes it so difficult to stop smoking tobacco or even put down the best vape. Some studies also claim that nicotine in tobacco may harden the arteries making it responsible for some heart-related conditions caused by tobacco.

Conversely, weed doesn’t contain nicotine, and therefore the number of addiction cases are far less compared to tobacco. In fact, according to National Institute on Drug Abuse, Marijuana doesn’t lead to addiction; it is only responsible for a condition termed as ‘marijuana use disorder’ which may take the form of addiction in severe cases.

As seen, the adverse health effects of nicotine are well evidenced. In comparison, THC or tetrahydrocannabinol (the chemical compound responsible for cannabis’ psychological effects) is said to have a number of health benefits. Some studies also claim that THC is a bronchial dilator meaning it has an ability to open up the lungs and aid in clearance of dirt and smoke.

Where nicotine and THC are similar, however, is when trying to quit either. The withdrawal symptoms and problems with each are very similar and the level of difficulty in quitting are also about the same.

Tobacco Vs. Weed and Cancer

Tobacco is regarded as the number one cause of cancer and cancer fatalities. Tobacco use and smoke exposure may cause many types of cancer including lung cancer, rectum, cervix, colon, pancreas, stomach, liver, kidney, bladder, throat, esophagus, and mouth. National Cancer Institute notes that there is no safe level of tobacco use.

There are thousands of studies that link tobacco to various types of cancer, such as lung, liver, and mouth cancers. But in comparison, studies have so far failed to find a connection between weed smoke exposure and smoking-related cancers such as lung and liver. Actually, several studies (such as this and this) have demonstrated that tetrahydrocannabinol (THC) in cannabis may be anti-carcinogenic.

Tobacco Vs. Weed and Pulmonary Function

There is an abundance of research that connects exposure to cigarette smoke, whether actively or passively, to a higher risk of lung cancer in adults, and with increased frequency of respiratory infections and symptoms in children. However, there is no credible evidence that associates cannabis smoke and adverse effects on pulmonary function. Emory University in Atlanta conducted a study to determine if cannabis smoke leads to detrimental effects on pulmonary function. According to their findings, exposure to marijuana smoke, even for extended periods, is not associated with detrimental effects on the lung functioning.

It should be noted, however, that marijuana is similar in one respect to cigarette smoke. And, that is the fact that second-hand smoke from marijuana can affect people in the vicinity, particularly in a closed area. Though the second-hand smoke won’t cause anybody to fail a drug test as the myth goes, it does affect blood vessel function in the lungs of bystanders. Consider who is around when smoking marijuana, particularly children.

Based on the myriad of studies presented in this post, it is quite clear to users that marijuana regulations are not “for their own good.” There are no reliable studies that link weed and unfavorable health effects as is the case in tobacco smoking. Moreover, for most of the human existence, cannabis has been considered a medicine and therefore, restrictions, as those existing in New York and Minnesota, unnecessarily deny people what could be another medical option.

From the ancient Chinese, to the Egyptians to the Romans, they all understood the medicinal properties of marijuana. Why today is it so frowned upon as a medicine?
It only makes sense to at least research how marijuana use can benefit people rather than criminalize its use.

0 comments on “Tobacco Vs Weed: What Causes the Greater Risk?”