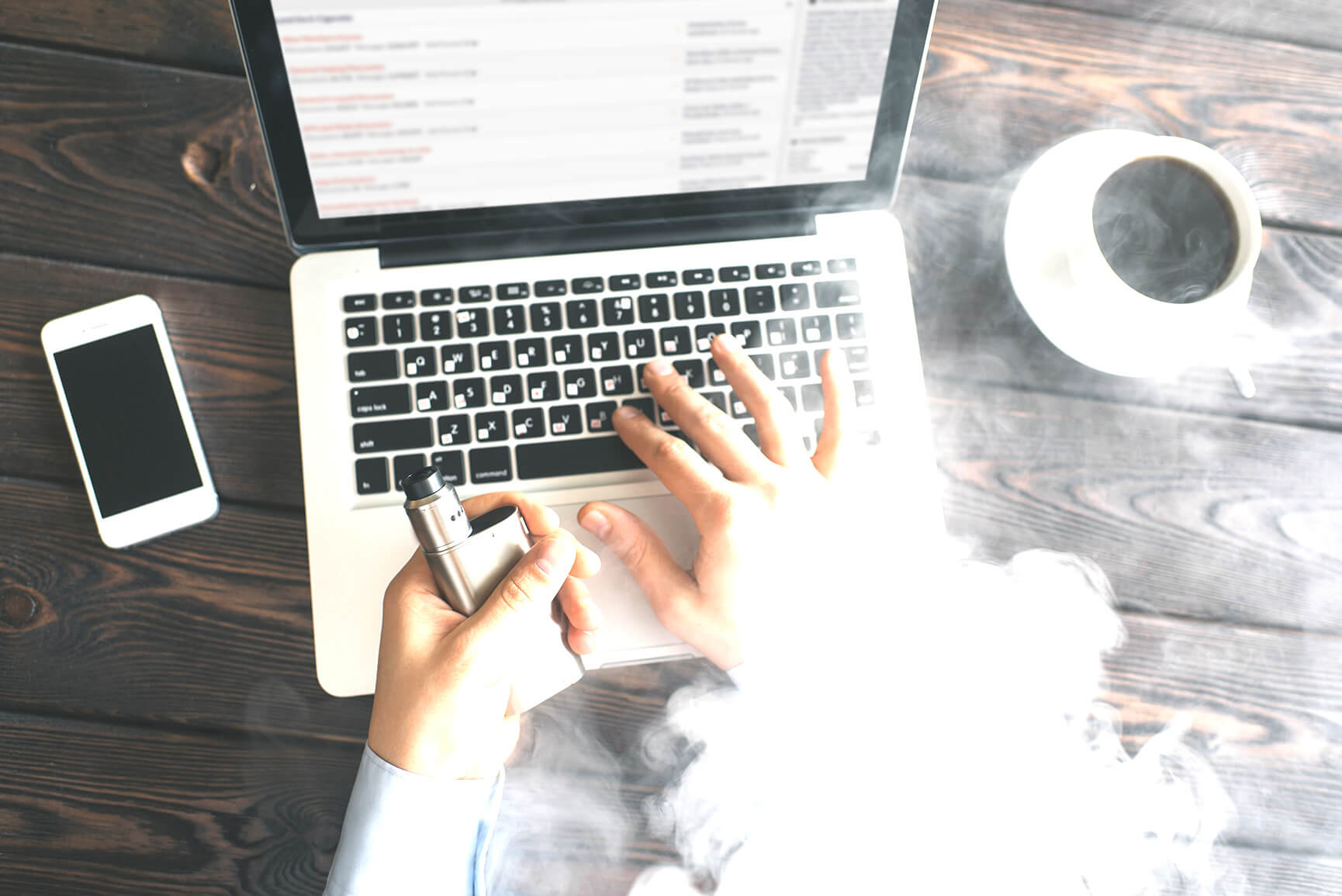 Whether you are a newbie or an advanced and experienced vaper, joining a vaping community may be one of the things you will decide on. Some vapers are satisfied with low-end, entry-level cartridge e-cigs used in their own space and time, while others are more into cloud vapor producing devices that are shown off at gatherings and special occasions. A lot of people begin vaping to quit smoking and an equal number of people vape as a hobby. Whatever your reason for using the device, there is a vaping community that will suit you and your character.

Turning to vape communities, what comes to mind is a group or groups of people who indulge in vaping. These groups then come together to share information related to all things vaping. In a vaping community, members will exchange information on the trending inventions in e-cigarettes ranging from pod designs to the different e-liquids and their flavors in the market.

Having a variety to choose from is always a good thing. It means you will not commit to something for lack of an alternative. Whether you are an extrovert who wishes to join people in person or an introvert who only needs e-cig advice, there will be a community suited for you. Introverted vapers can ask questions at vape websites and at online vaporizer forums, while more extroverted vapers can meet in public with their local vape community to interact on a personal level.

Due to the increased use of e-cigarettes today, online vape forums (also known as vape message boards) have also increased in number.

Across the world, there are vape communities in all the geographical locations. Others use languages that are unique to those regions instead of English meaning that if anyone is looking for an online vape message board to join, he or she would obviously be spoilt for choice.

Some of the highly subscribed online e-cig forums include Vapers Forum, E-Cigarette Forum, Vaping Underground, and Planet of the Vapes which leads in user subscription. Others are the likes of International Vapors Club, E-Smokers Forum, E-Cig Reviews, AussieVapers (for vapers in Australia), Vaporama, among others. The non-English ones include Dampfertreff and Korean Vapers, etc. 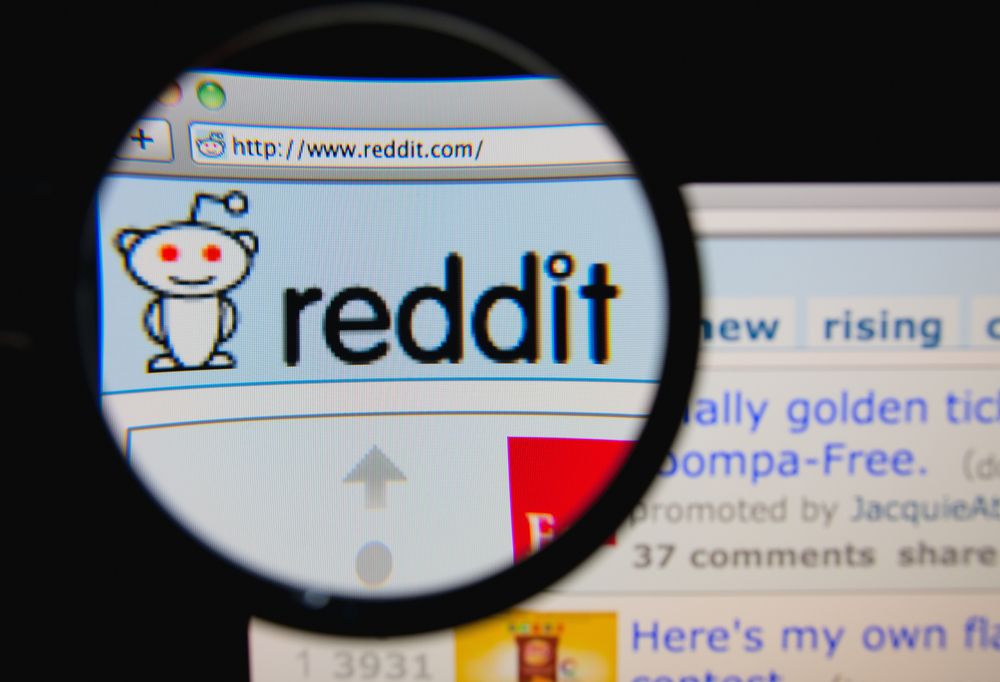 Reddit vape communities hold discussions in a controlled environment. Subreddits are created depending on a focus subject. The rules are usually set to prevent members from deviating from the main subject. This way, vaping forums are brought to the existence and members post text or links that contain information on vaping.

For example, there is a vape subreddit r/electronic_cigarette that discusses all content related to e-cigarettes, from e-liquids to mods. There is also r/Vaping which is a vaping guide reddit for vapers in general. Also, there is the r/DIY_ejuice and the r/RBA, which is for discussions about e-liquids and rebuildable atomizers, accordingly. For those looking for devices and accessories for sale, r/ecig_vendors and r/ecigclassifieds are the places to join.

Depending on one’s geographical location, it is possible to subscribe to a subreddit that has been created for people within that location. For example, Canadian e-cigarette users can join r/Canadian_ecigarette. 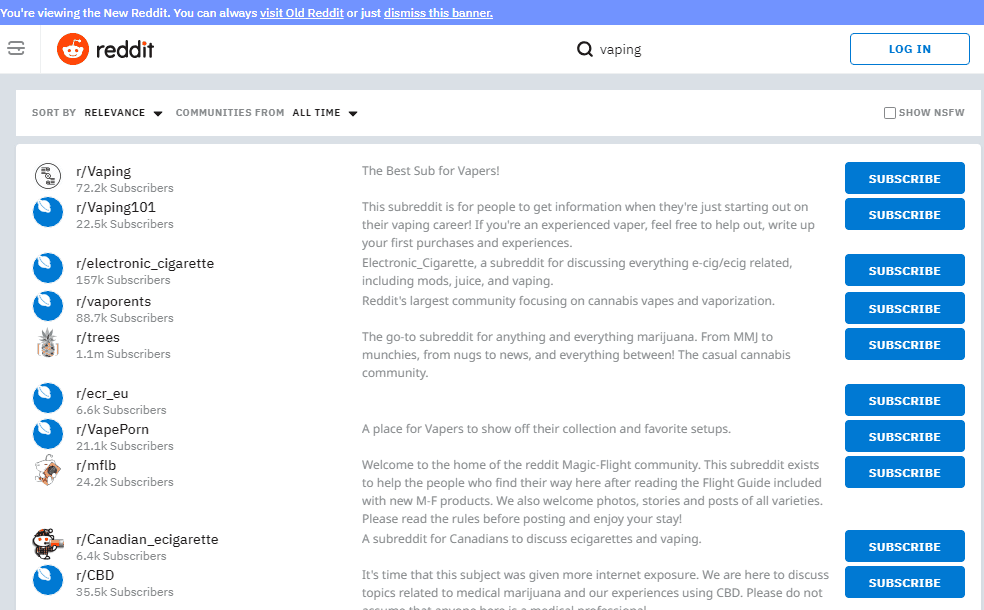 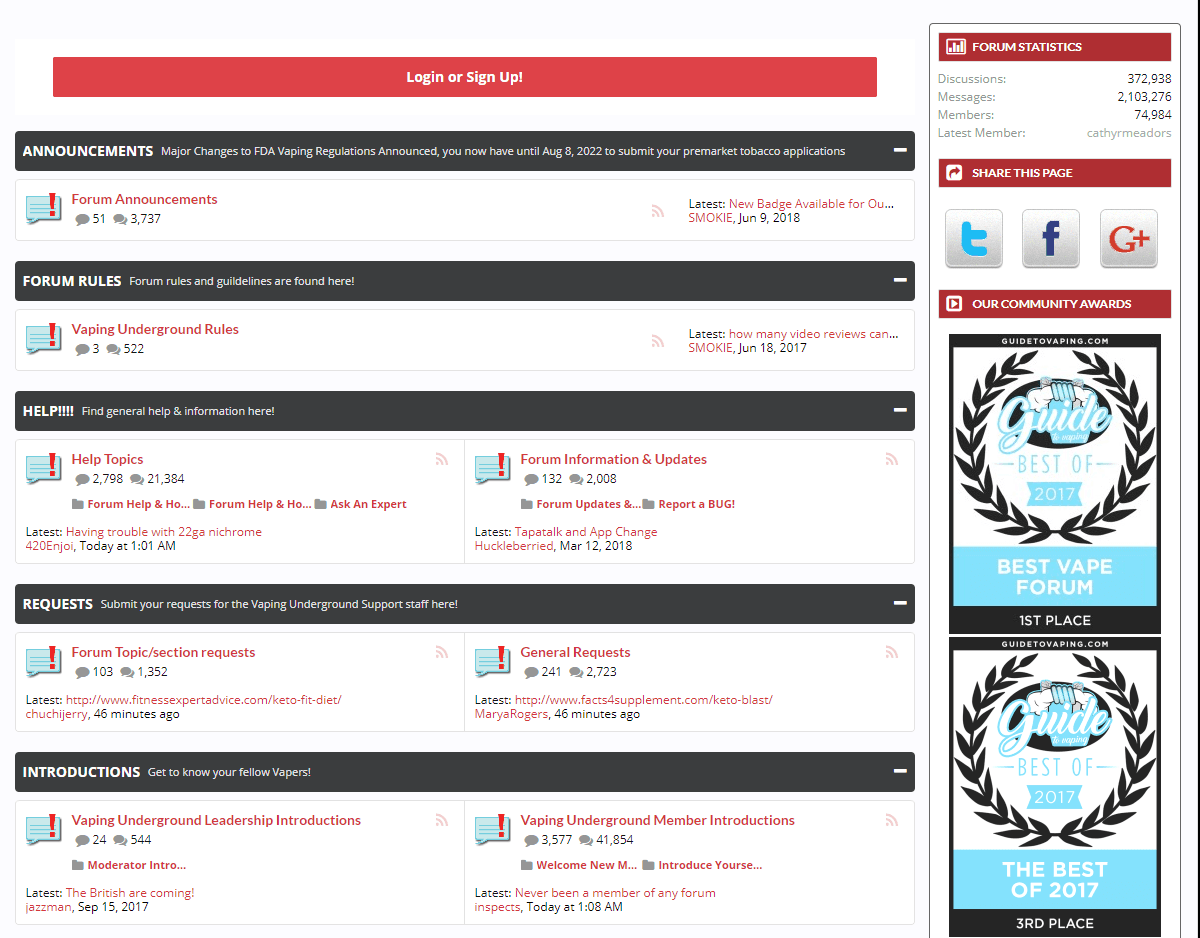 Vaping Underground, as its name suggests, is a haven for those vapers who do not quite fit in yet, whether due to inexperience, lack of knowledge or for the simple reason of being beginners. Providing a forum where even the most rookie vapers feel welcome was the raison d’etre of the whole operation from the beginning.

There are no overly fastidious gatekeepers at the Vaping Underground. Neither is there a seniority-based hierarchy like with the Electronic Cigarette Forum: 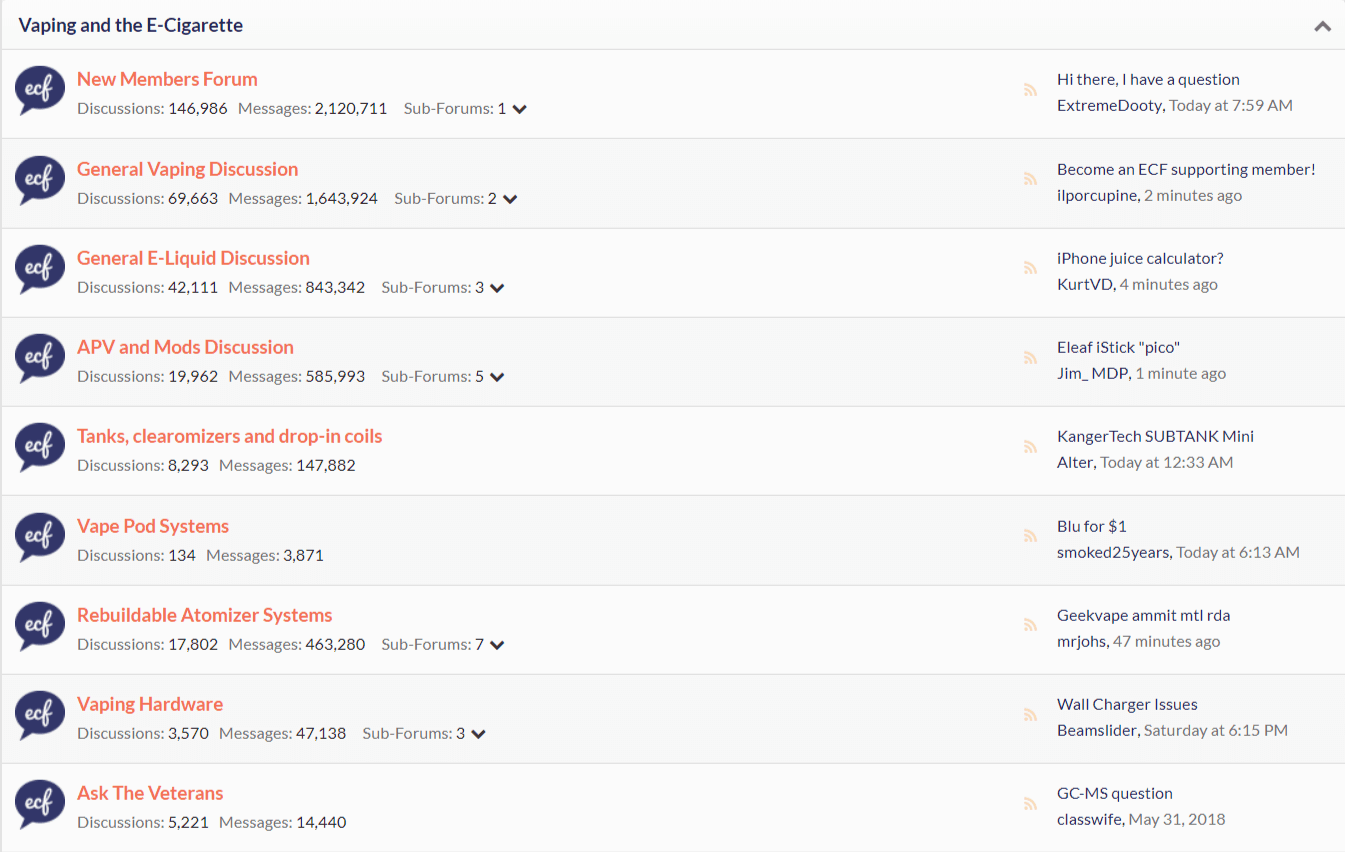 The E-Cigarette Forum was there from the beginning. Founded in 2007 by Englishman Oliver Kershaw, the sites claim to be the “voice of vaping” is more than justified, as 2007 was also the year that e-cigarettes were introduced into major markets like the US and UK.

ECF has now more than 250,000 members, making it the most popular online forum for all things vaping.

New members and vapers go through all necessary steps to gain access to the inner sanctum of the most veteran vapers:

Planet of the Vapes (POTV) 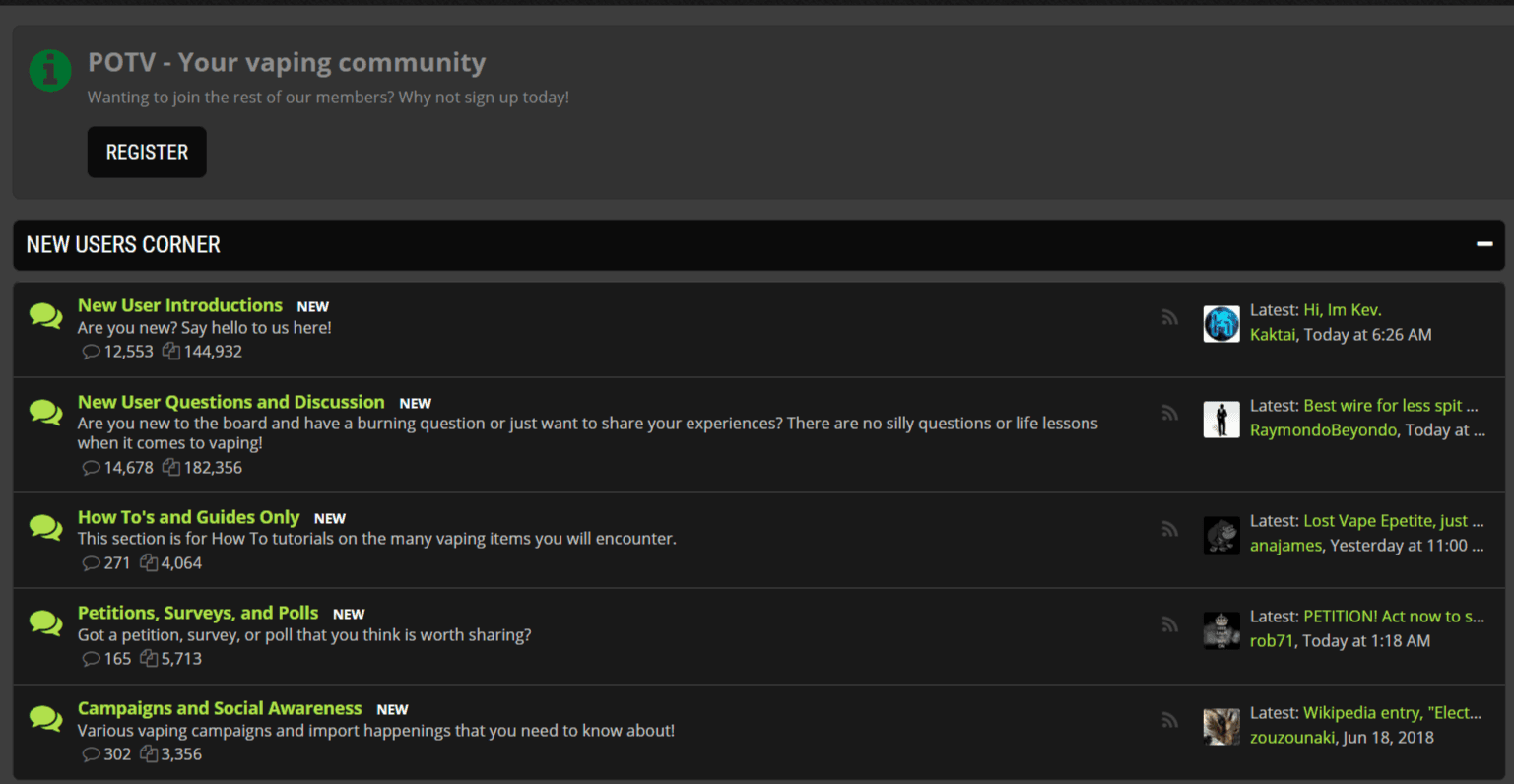 Planet of the Vapes is a UK-based site, with one of the more eye-catching, stylized, and adult websites than others in the business, like the authoritative, albeit bland and flat layout of ECF.

Concerning user participation, POTV is just as open and welcoming as VU and ECF. POTV is very well-moderated, though there are restrictions and rules regarding posts and overall content:

There are classified forums, which have their own price of admission: 100 posts. Judging by that standard alone, it is easy to see how seriously the POTV community takes post quality. Not only do moderators keep an eye on things, but POTV commentators also stand at the ready to lambast anyone who offers less-than informed comments.

The local vaping community usually meets at the local vape shops which are accessible by everybody. As a way of marketing, the vape stores will usually have lounges in their premises. It is here that local vape forums take place. Local vapers get the chance to sample the latest developments in the world of electronic cigarettes.

Being together in a group becomes a great opportunity to enhance your vaping experience. A less experienced vaper will get all the advice needed to acquire better devices and e-juices. The biggest advantage is that members are willing to allow one another to have a feel of their devices and get to vape from the different flavors of e-juices.

Vape Conventions and Meets are large assemblies, characterized by the coming together of thousands of vapers from distant destinations. Vape manufacturers will normally grace these events ready to sell and market their products.

On the other hand, vapers will come looking for deals on the latest technology in e-cigarettes together with new flavors. Competitions and giveaways make the events very lively and popular.

This is the oldest vape convention. It was founded in 2012 to address the growing needs of the potentially big vape industry. Before its formation, vapers used to meet in rented hotel facilities where there was limited capacity to accommodate many people.

It is a convention with many firsts:

Unlike the ECC, the UK’s Vapefest does not include an expo. It is usually a meet for vapers only. Newbies get to learn from the veterans. There are discussions and vape help chats aimed at sharing information and socializing. Vaporizers are showcased and a participant can be able to learn about the newest vaporizers on the market.

The vaping community has grown in the recent years. All this has been to the advantage of vapers and vape manufacturers at large. Vapers have a wide scope of choice when it comes choosing the forums that will help them access all the information they desire. Whether one wishes to stay indoors and join the online forums or wish to meet up with vapers in your neighborhood, there will be a forum for any vaper to join.