The SMOK Stick V9 Max is the latest stick vape pen from SMOK that keeps features like its single-button control but pairs them with things like an internal 4000mAh battery. The SMOK Stick has had various iterations including the V6 and the original SMOK Stick.

There has not been much change though, although the V9 Max is the largest one of the bunch. The V9 MAX uses single-button operation and has a direct voltage output, which maxes out at 60W.

Up Close with the SMOK Stick V9 Max

The familiar and simple form factor of the SMOK Stick V9 Max kit makes it very user-friendly. The Stick is a thick tube of a mod that uses no screens and has only one button. There is a small, pin-hole LED in the pentagon-shaped button that lights up when in use or to show battery life.

It has a 510-connection up top with a spring-loaded, gold-plated 510-pin at its center. The entire top section of the device has a diameter measuring 28mm (1.1”), which is big enough to fit many large tanks. The SMOK Max V9 tank has a diameter of 25mm, so there is absolutely no overhang when it is installed.

The battery works on direct voltage output and it can output as high as 60W. The 60W limit is below the 80W limit that the two coils can reach, but more about that later. There is a small USB port on the side of the device that lets users recharge the massive 4000mAh battery. The device, with such a large capacity, does take a while to recharge, but it is also very long-lasting.

The SMOK Stick Max V9 comes as a full kit so users can expect to find a lot of goodies in the box. Some retailers also have another version of the starter kit Smok that includes the TFV8 Baby V2 tank instead of the SMOK V9 Max tank. The device comes in the typical, hardcover, lift-open box with the SMOK logo on the top. Inside, users will find all the parts necessary for the smooth operation of the mod. 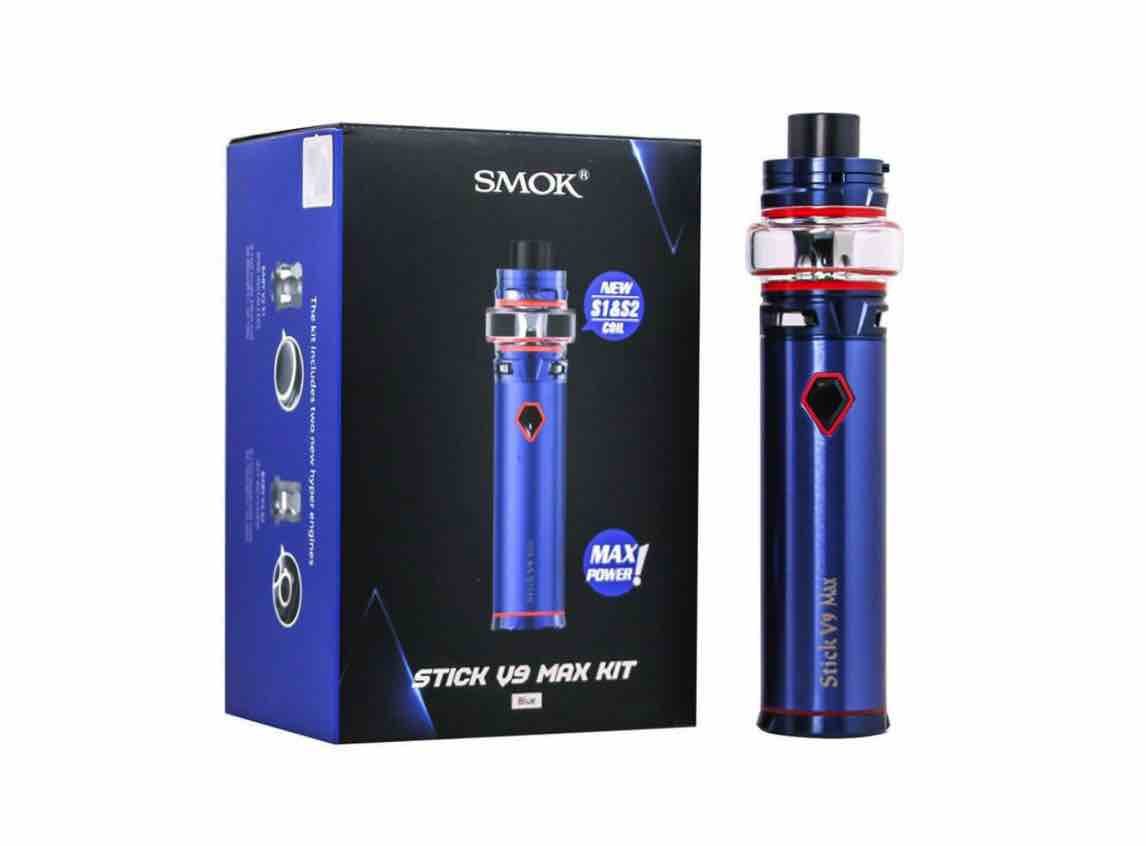 Here’s what to expect:

The SMOK Stick V9 Max is a heavy-duty tube mod that resembles a fully mechanical mod with its beefy girth. Despite looking like a mech mod, the Stick V9 does not have a removable battery. The cell is built-into the design. The capacity of the battery is 4000mAh so its size is significant. The diameter of the device reaches 28mm (1.1”) and its height is just under 90mm (3.5”)

The Stick V9 Max kit is a weighty device and with the tank attached it is not made for portability. SMOK did add another ring around the base of the device to support the weight of the device and any tank attached so that it does not tip over when standing. The extra support ring was a good move, as the mod stands steadily on a flat surface and does not fall over even with a slight push (but do not overdo it). 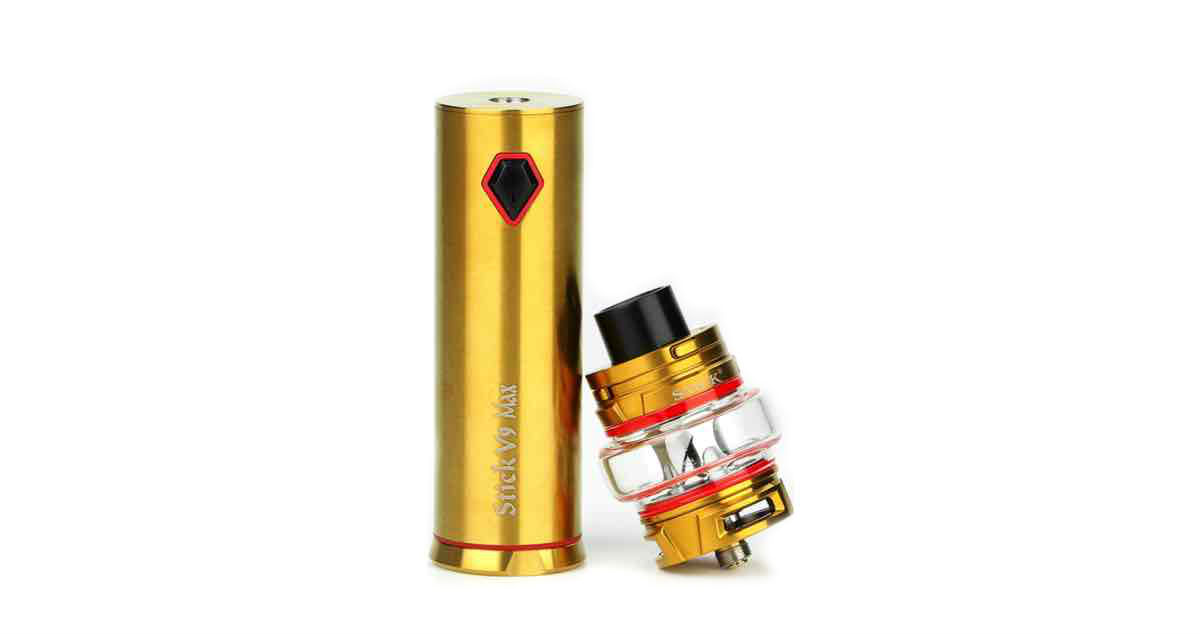 There is only a single button on the device, and it acts as the firing/power button. There is a small LED inlaid into the button, which has a silicone build and protrudes only slightly from the device’s surface. It is very responsive and works very well even with consistent use.

The SMOK Stick V9 Max is very easy-to-use. It has only a single button and works on manual functioning so users do not have to input or adjust any settings. The device also does not allow it because it has no screen or any other control panel. Users should fully charge their battery before using it, which may take a while (two hours, at least) as the battery has a 4000mAh capacity.

Users can activate the device with five clicks of the central firing button and press to inhale the vapor. The tank is also self-explanatory. The tank uses a top-fill method and has a button-release top cap so users need only press the button to reveal the fill port. The coil installation is also easy and similar to the way other SMOK tanks operate.

The SMOK Stick Max V9 mod comes with the similarly named tank, which has an e-juice capacity of over 8ml (8.5ml to be exact). There is no other glass piece for the tank so users are stuck with the bubble-glass piece, which flares out to about 35mm of diameter (1.3”) at its widest point.

The tank features a stainless steel and glass construction. It has a removable 510 Delrin drip tip up top and has an easy release-button to make filling and refilling easier. The coil base features two, large bottom adjustable airflow vents. The base is removable and users can install their coils by screwing the coil into the base then screwing on the glass piece.

The two coil options for the Max V9 are the same resistance, but they have different designs. The coils are Baby coils from the TFV8 Baby tank. They are also compatible with the Baby tank if users have it on hand. There is a mesh-style, single coil in the Starter kit Smok that is rated for 40-80W, while it vapes best between 60-70W.

There is a quad-coil also in the kit. The Baby V2 coil is rated for 30-70W but vapes best between 45-60W, which is ideal for the mod’s high power output. Both coils have a resistance of 0.15ohms. They both feature large juice ports for users to prime their coils before installing them into the tank.

The SMOK Stick Max V9 along with its tank is a low-key device that can still produce a lot of clouds. The limited power output of the mod – 60W – means it has a limited ability to produce sub-ohm-style clouds, but for new users and people who do not enjoy box mods, the vapor production is adequate.

For people who want larger clouds or more intense flavor, there’s also the option to use the tank with a variable wattage mod. With another device, users can get the most out of the mesh-style coil, which can go as high as 80W. This power increase improves the vapor quality, making bigger, warmer clouds.

The device does have a long battery life, along with pass-through charging so users can vape and charge at the same time. When the battery does run out, the recharge time is long and users will need to wait two hours or more for the cell to full recharge. The mod does stand well when placed on a flat surface, and it is just as well, since, if the device were to tumble, the bubble-glass section would shatter immediately.

The SMOK Stick V9 has the same shape and size of the V9 Max although the former has a smaller battery capacity at 3000mAh rather than the 4000mAh of the V9 Max. 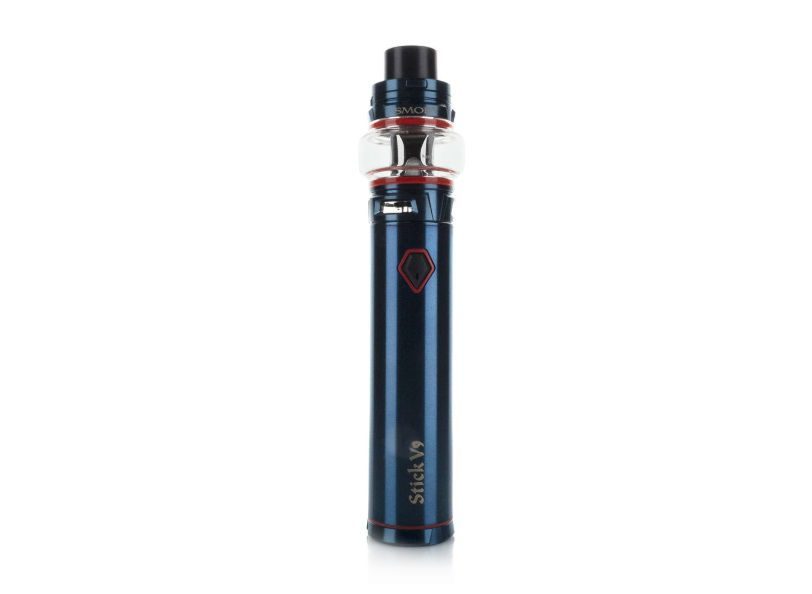 The V9 also has different measurements than the original. It has a shorter build, by about 4mm, as the V9 measures 24mm in diameter, compared to the V9 Max’s 28mm diameter. The V9 has the same single-button operation and comes with the V9 Max tank, although it uses different coils than the V9 Max kit.

The SMOK Stick Prince is another entry in the long-line of SMOK pen mods. The Stick Prince comes paired with the SMOK Prince V12 sub-ohm tank that can hold both 5ml or 8ml of e-juice in its build. The Stick Prince has a 3000mAh battery and works on direct voltage output, like all the other Stick mods. 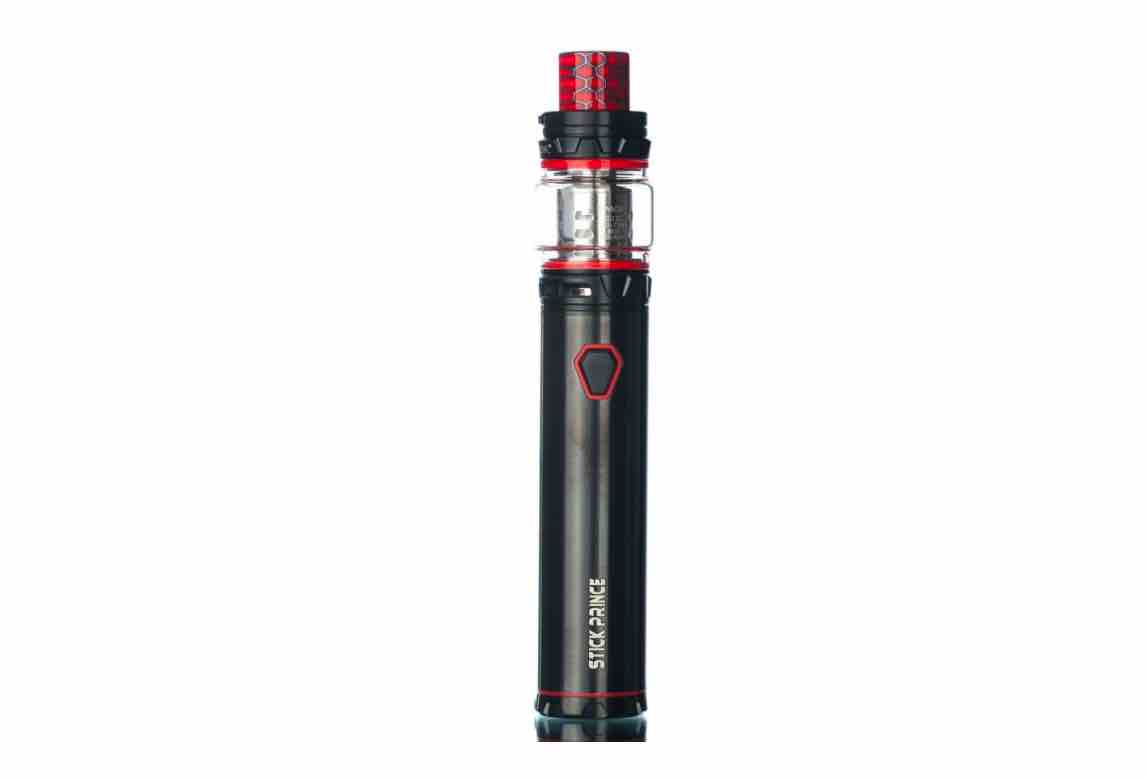 The Stick Prince also has a high-power output of 4.2V and has a 25mm diameter build. It is also made of stainless steel, uses single-button functioning, and stands at just under 85mm, making it a little shorter than the SMOK Stick V9 Max.

The SMOK Stick V9 Max mod and tank make a great starter kit for anyone starting to vape. It can seem a little intimidating given its size and weight (133.5g!). But the single-button functioning of the device, along with safety features like an 8-second cut-off time, low voltage protection and protection short circuit, make it easy and safe to use.

The V9 Max mod may not be the best device to take on-the-go, given its size. The size of the device is why SMOK added the extra ring at the base to hold up the combined weight of the mod and a tank full of e-juice. The tank and coils may not be the right fit for the capabilities of the mod. Users who want to get the most from the V2 mesh-coil may want to swap the mod for a regulated mod that can push as high as its 80W maximum.