Let’s take a stroll down memory lane and remember a time before the Kangertech AKD K-Pin. Vaping was a relatively new thing, save for the people who were there at the beginning, and things weren’t that simple. Firing buttons weren’t that prevalent, and e-juices were just liquid nicotine in a pre-filled cartridge.

There were hardly any models with complex interfaces or various button controlled features, but things like SSOCC coils, were the preferred choice for some since they were the first coils to be used in devices from Kangertech.

Kangertech has, fortunately, decided to bring back the SSOCC (stainless steel organic cotton coil) coils for the AKD K-Pin that also features a 2000mAh battery, a full length of about 135 mm and two of the SSOCC as mentioned above coils. There are also five LED lights on the bottom of the battery that indicates battery life and power output.

As far as box contents, there’s not much to add other than the basics:

I was a little struck by the heft the K-Pin packs. It is a sizable mod, probably better reserved for a home device, since it might be difficult to carry around with you.

But, with this device, you should expect things to be a lot bigger. I mean all the specs scream out “bigger and better”:

The battery and tank components can separate, and the 2000 mAh battery is compatible with just about any other tank you can think of, save for the nickel variety that is often used for temperature control devices.

As I said, the K-Pin has the size and weight of a remarkably big graffiti pen. You know what I’m talking about, those colossal, Sharpie looking things that some artists use when they want to the control and line-width that a traditional spray can cannot provide (sorry, I was veering off into another sub-culture).

And if you get a K-Pin in either one of the “shocking” colors that Kanger offers, you’ll see the resemblance, (mine was red, but they come in white, yellow, black and marine blue).

The two parts – battery and tank – easily screw off of one another and assemble quite easily as well. The K-Pin has the standard 510 threading inside so it can be used with a different atomizer if you so desire.

The mouthpiece is a different story though, and since it is a proprietary mouthpiece, you’ll have to go directly to Kanger to get another one should the original break. The tank goes supersize with a 4 ml capacity that is top-filled and easy enough to fill with a central filling mechanism.

The airflow valve in also non-adjustable, which provides for a simple, straightforward vaping experience, without having to mess about with extra controls. So, like most starter kits and AIO’s, it’s just a matter of charging, filling, and vaping.

Getting It All In There

Being a starter device, the K-Pin is remarkably easy to fill. The open fill tank doesn’t have designated slots; it’s just an open-topped tank, with the cup design for which Kanger coils are famous.

I was too curious to test out the combination of SSOCC coils and the 2000 mAh battery capacity to see how much cloud I could get. I used an e-juice near and dear to my heart (with a higher VG content to get great, sinewy clouds) the Kentucky Bourbon e-juice from Mig Vapor, with no nicotine content.

And I was quite impressed with the strength and ease of pull that I got with the mouthpiece. I primed the coils for about ten minutes or so, and then just went to town.

I didn’t get a direct-to-lung hit that would be expected with a device like this, but there weren’t many mouth-to-lung hits either.

Cloud production couldn’t have been better or denser. Despite not having much in the way of airflow or wattage adjustment, just the raw power behind the K-Pin was enough to deliver full flavor and great clouds.

The battery and tank life went almost hand in hand. I didn’t have to put in any extra liquid until after two days, so that gives an idea of how long a 4 ml tank can last. The battery life helped the K-Pin live for at least two days straight. Charging took about two full hours before all the LEDs on the front lit up.

The K-Pin is a standard, integrated model, so there’s not much to offer regarding goodies. There isn’t going to be much tinkering with the mouthpiece or adjusting wattage or rebuilding the atomizer, but when I compared it to something like Kanger’s KBox 200 mod that has all of those things and more, I was more impressed with the latter.

The K-Pin’s simplicity of design and function might be good for a starter kit. I’ve recently become swayed toward the mod side, so I have a preference (curiosity) to try and hack my devices as much as I can, the KBox’s swappable 18650 batteries were perfect for that.

I know I said that I was drawn to more modifications and hacking, but for someone who has never picked up a vape mod before the K-Pin is incredibly easy to use.

The K-Pin is a straight five-clicks-on/five-clicks-off kind of pen, and without being able to adjust voltage or temperature, it still delivers a significant, flavor-packed, stream of vapor with a long-lasting battery inside.

I know this size of a tank does not fly in Europe (you know, someone has to think of the children) but it is leak-proof. Even though I heard some people complain about a leaking problem having to do with the coil and once the mouthpiece gets screwed back on, there’s not much chance of escape there. Overall, the bigger tank capacity translated to a longer-lasting vape sesh.

Not Okay, In My Book

I mean, if you know what they are there for, then you have more reason to mourn the fact that they are not there. But if you don’t even know what airflow, or adjustable wattage and temperature settings do, then you won’t miss them.

If you fool around enough with how you hold the pen to your mouth, you can see which positions are best for a mouth-to-long draw, but normally the K-Pin goes straight to the lungs.

You can put on a ridiculous, asinine retractable mouthpiece, but not any airflow valves?

All Things to All Vapers

Kangertech had great ambitions for its AKD K-Pin. Kangertech wanted to make an integrated, AIO starter kit that had enough power and coil resistance to deliver both flavor and great vape clouds while making it easy to use and accessible to the average know-nothing.

I think they, more or less, hit the target. My only problem was with the mouthpiece, which didn’t serve any function for yours truly.

Some veteran vapers would have liked an adjustable airflow valve or some temperature controls like with other Kangertech mods, but the K-Pin is more a flavor vaporizer than a dragon breather, so it achieves that goal, at least.

I give the Kangertech K-Pin a satisfactory 7/10. 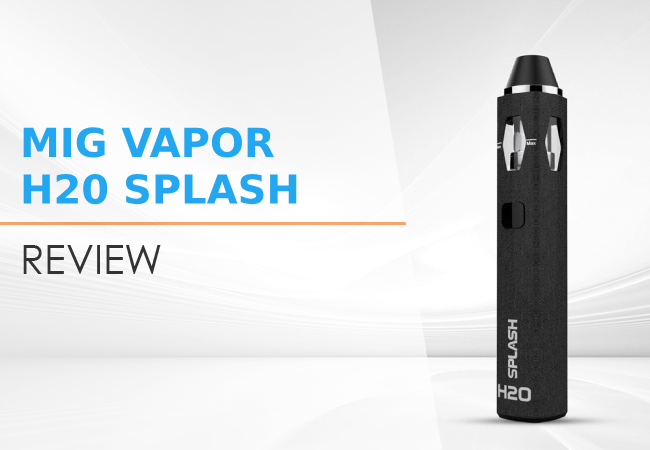 December 14, 2017
The Mig Vapor H20 Splash is Mig Vapor's entry into the sub-ohm vape pen market that features a 30W output and a 2mL tank capacity. 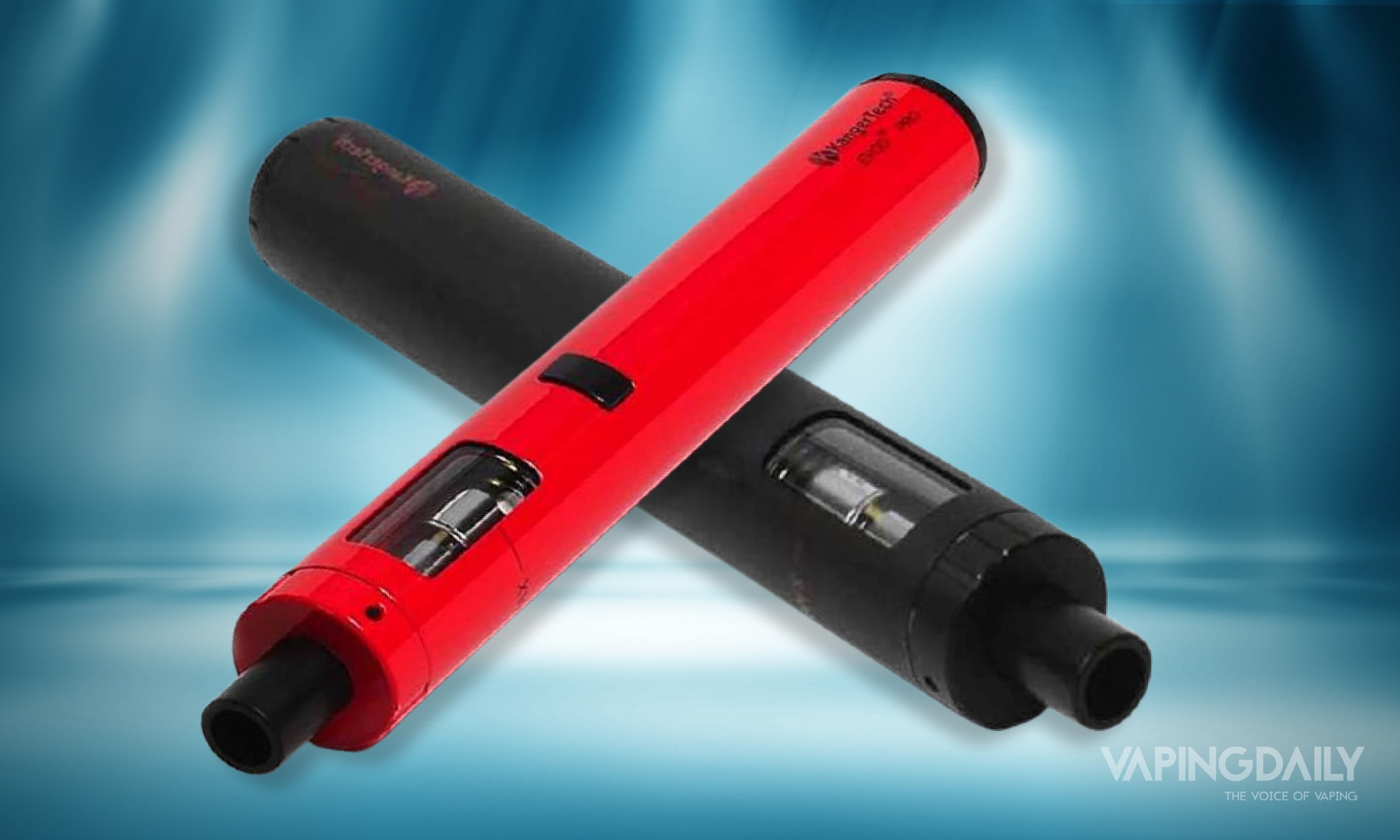 May 25, 2017
Evod Vape Pen, hosting some of the latest hardware and functionality to provide one of the safest vaping experiences available. Read on.